This little guy managed to get himself really, really sick.  Twice 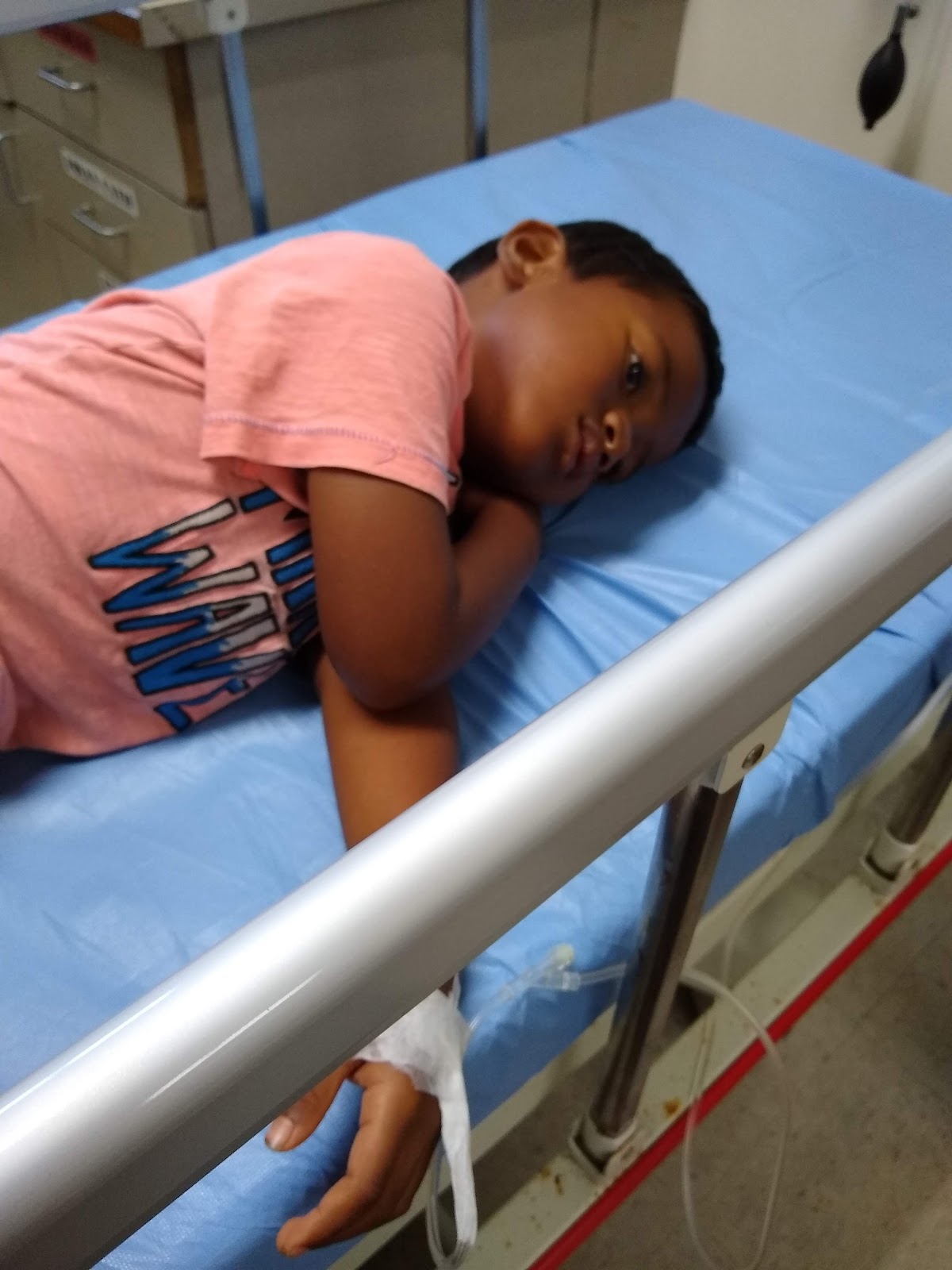 Earth started to complain about his stomach hurting one evening when we had stayed on Kwaj to have a picnic dinner and watch a softball game.  He wasn't interested in food or playing with his friends and just wanted to sit on my lap.  As most parents of young children do, my first question when he said his stomach hurt? "Do you need to use the bathroom?"  Of course, I thought it was something simple like constipation but going to the bathroom didn't help.
Earth started to cry from the pain and slept really badly that night.  He didn't eat any breakfast but since he didn't have a fever, I thought the distraction of school might take his mind off of whatever was bothering him. It didn't and they called me around 10AM to come pick him up.  I was able to get him to eat a banana but he threw it up just a few minutes later.  Even a tough mom like me knows that the combination of enduring pain, lack of appetite, and vomiting means that something is wrong so I reached out to my friend Katie at Changing Focus Ministries for help navigating the hospital system and we headed to the ER.
Earth was able to get in to see a pediatrician quickly and she diagnosed him with severe dehydration and prescribed a battery of tests to get to the bottom of his pain.  She called the surgeon in to rule out appendicitis and asked another GP to consult as well.  Everything was smooth and professional and Earth was admitted through the ER and hooked up to an IV while we waited for his room assignment. 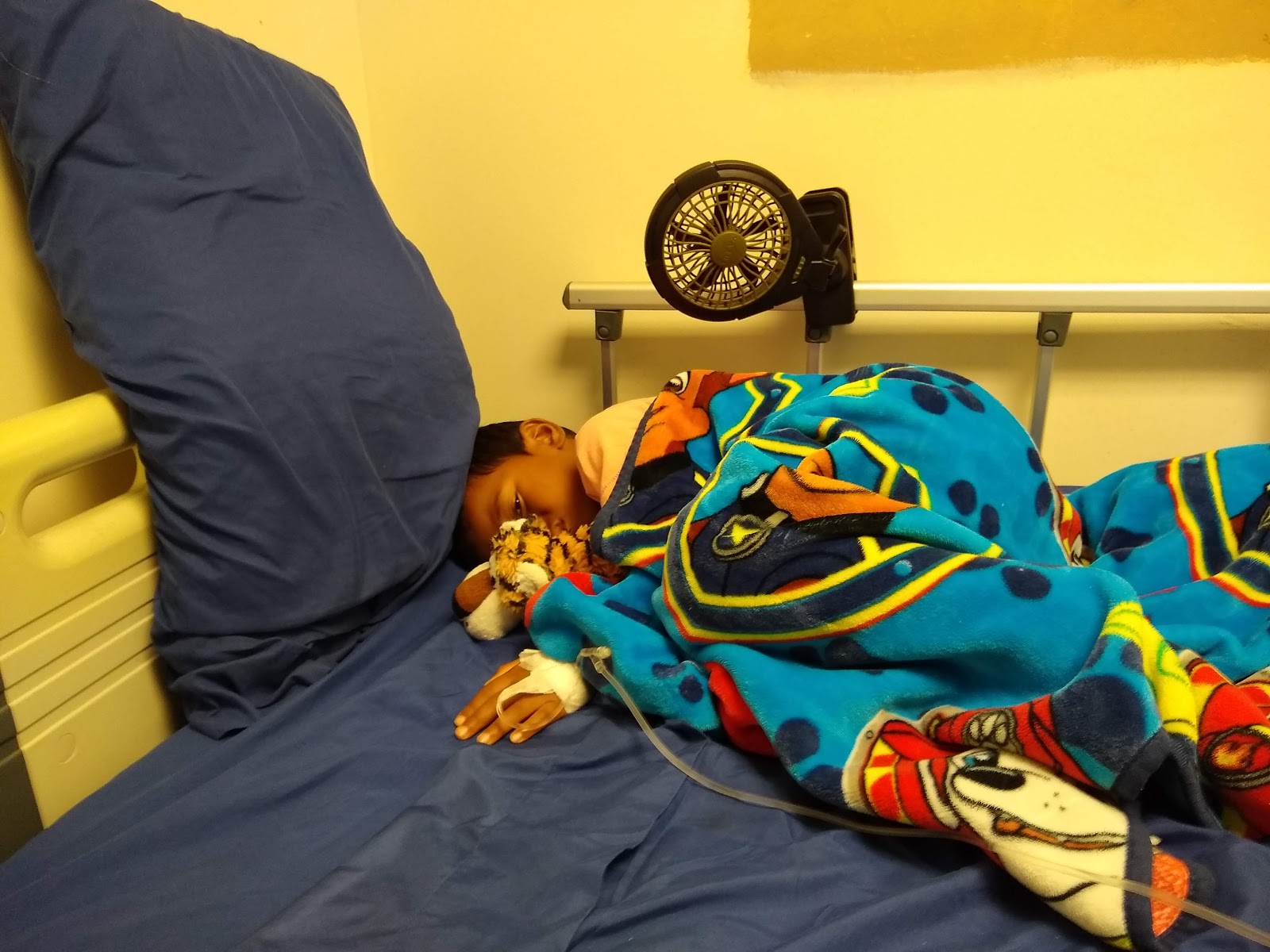 I'm so glad I had Katie to rely on because I didn't know that you needed to bring your own bedding, cleaning supplies, and toilet paper.  She and her daughter Sydney headed to my apartment to pick up everything we would need and then set up the room for us.  We settled in for the night while the IV fluids started to work their magic.
Earth had x-rays and an ultrasound done the next day, as well as blood tests and a urinalysis.  The diagnosis came back quickly: a severe UTI with crystals in his kidneys.  The doctor prescribed antibiotics and said that he would need to be in the hospital for several days to make sure the medicine was effective. 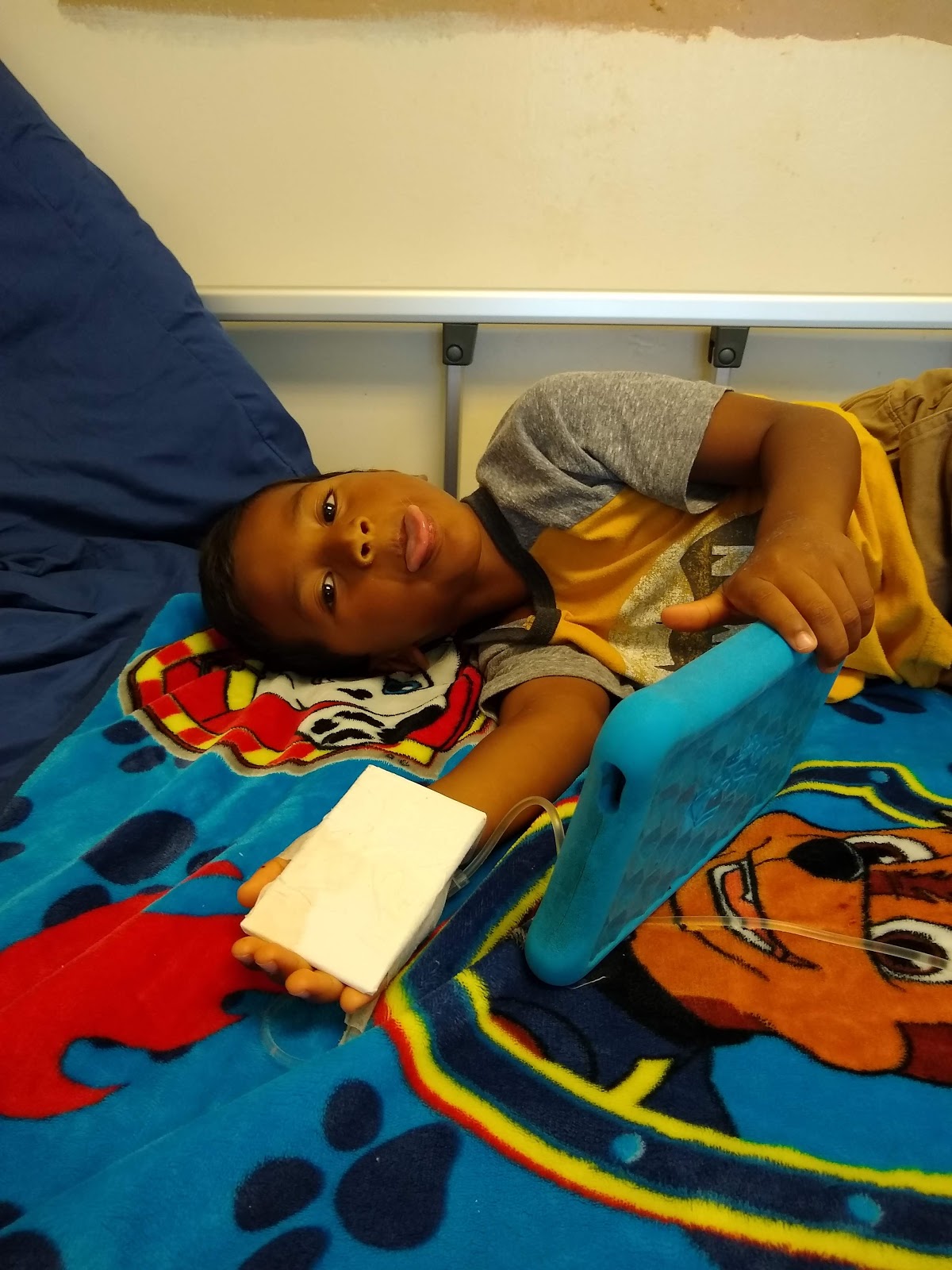 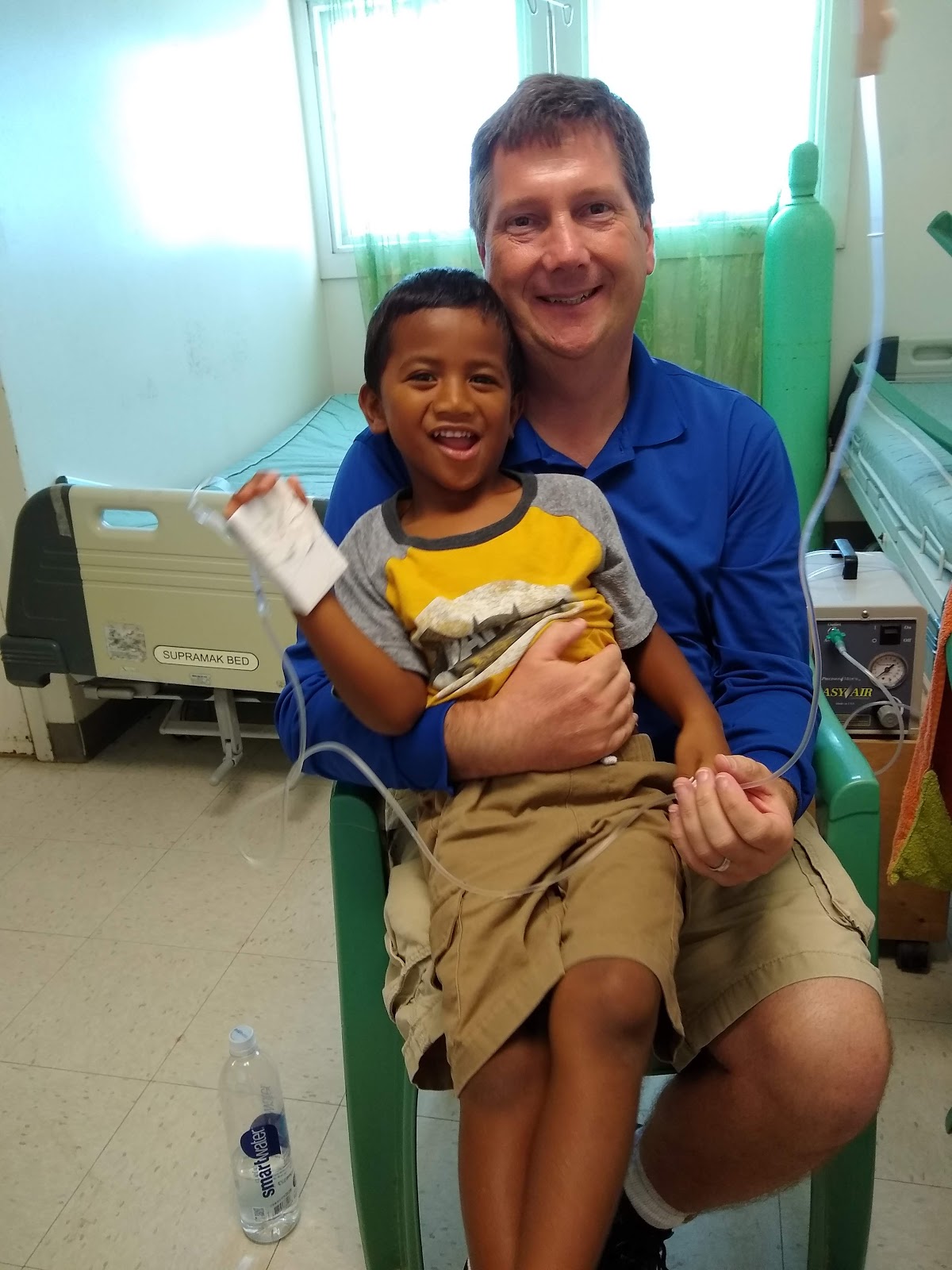 Katie and Sydney came every day (so thankful for them- they kept me fed throughout this ordeal, literally and spiritually)  and Uncle Paul came to visit too. 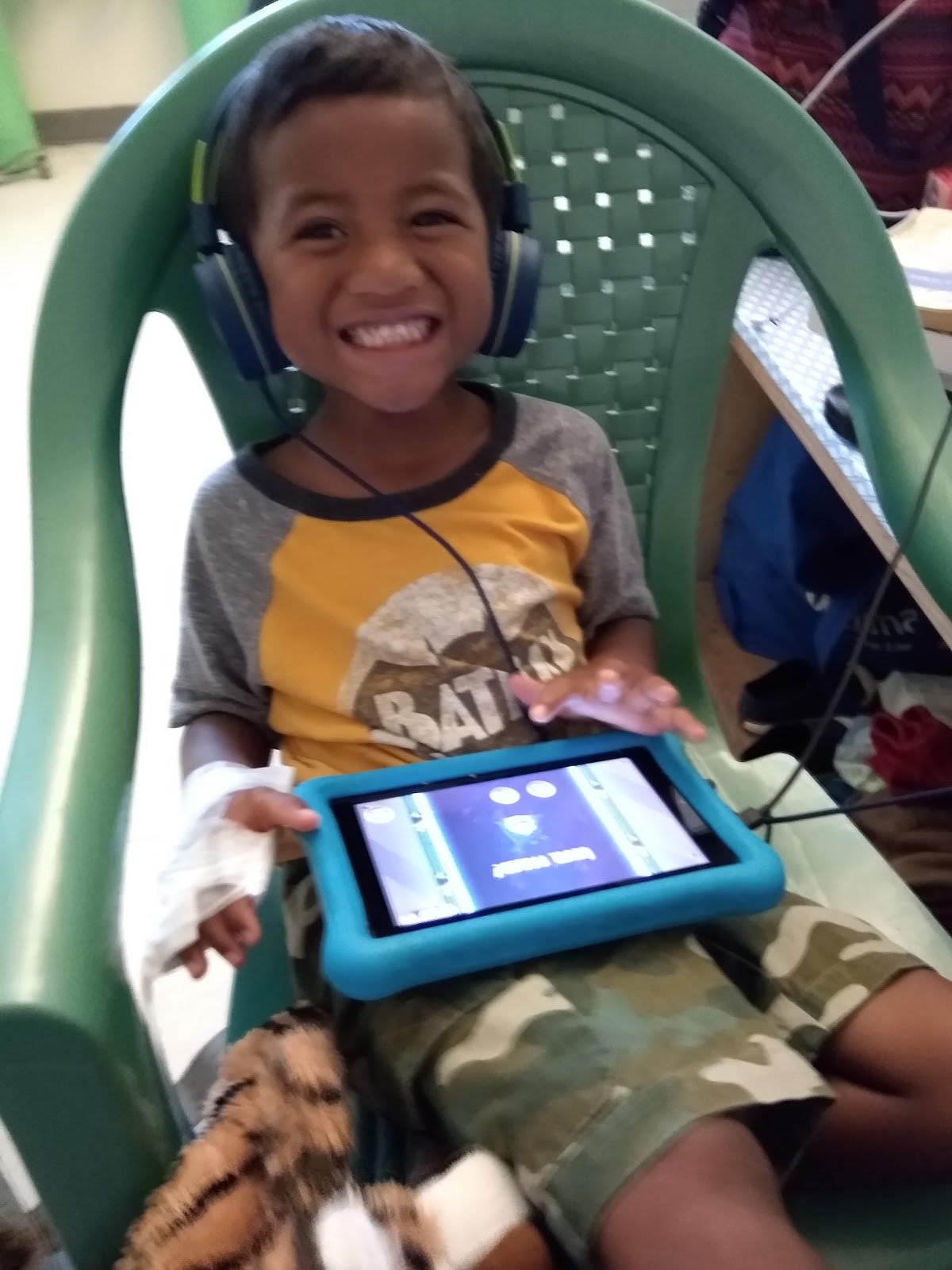 By day four, Earth was ready to be out of bed! 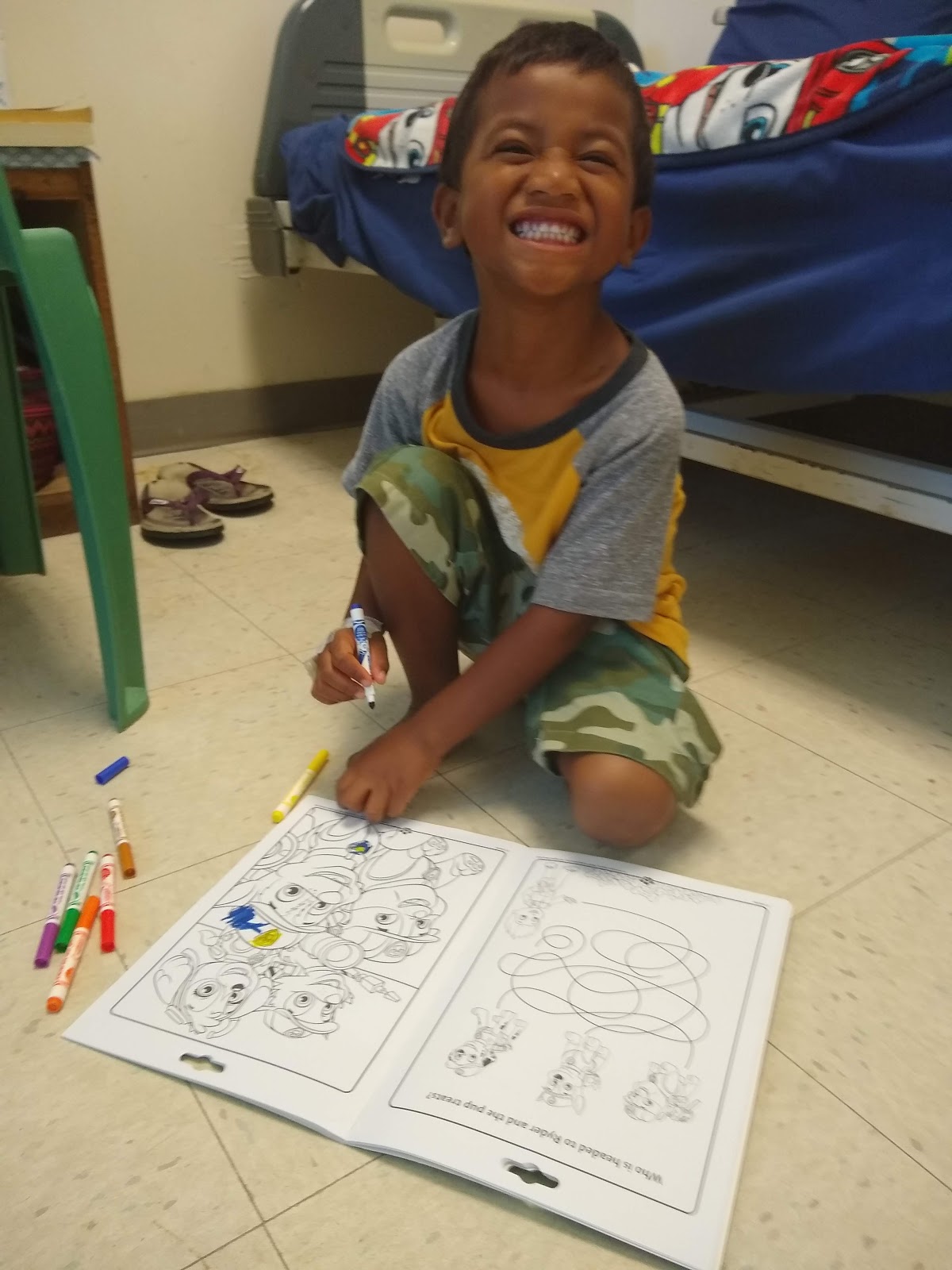 Day five, disconnected from his IV (I called it his battery pack and told him that he needed to be plugged in to recharge!)  and ready for activities other than his computer.

I hadn't known what to expect when we were admitted to the hospital but I was pleasantly surprised.  The inpatient facilities were a little run down but no worse than you'd see in any other developing country.  Here are three views of our room, taken on day five before I started to pack up. 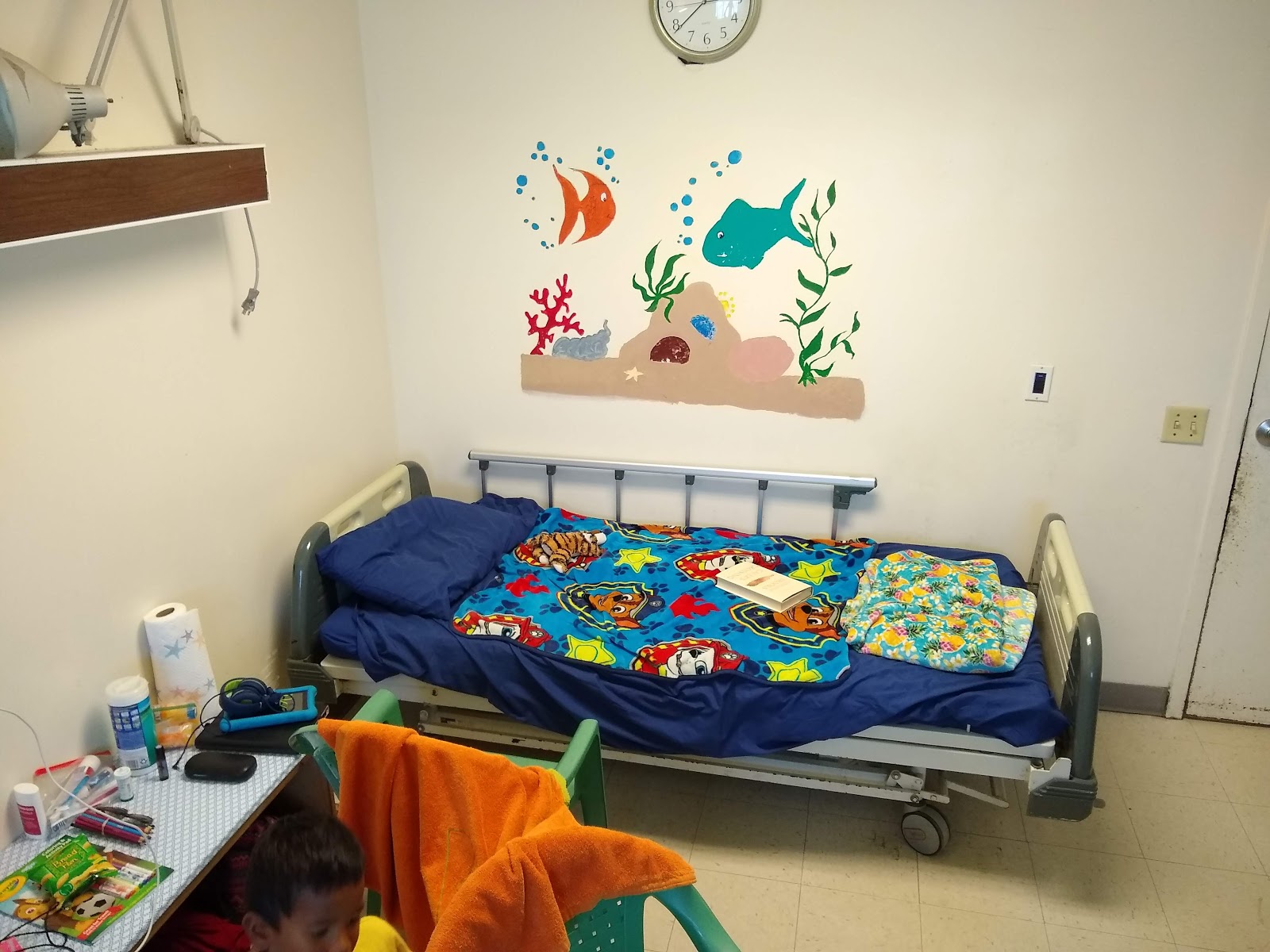 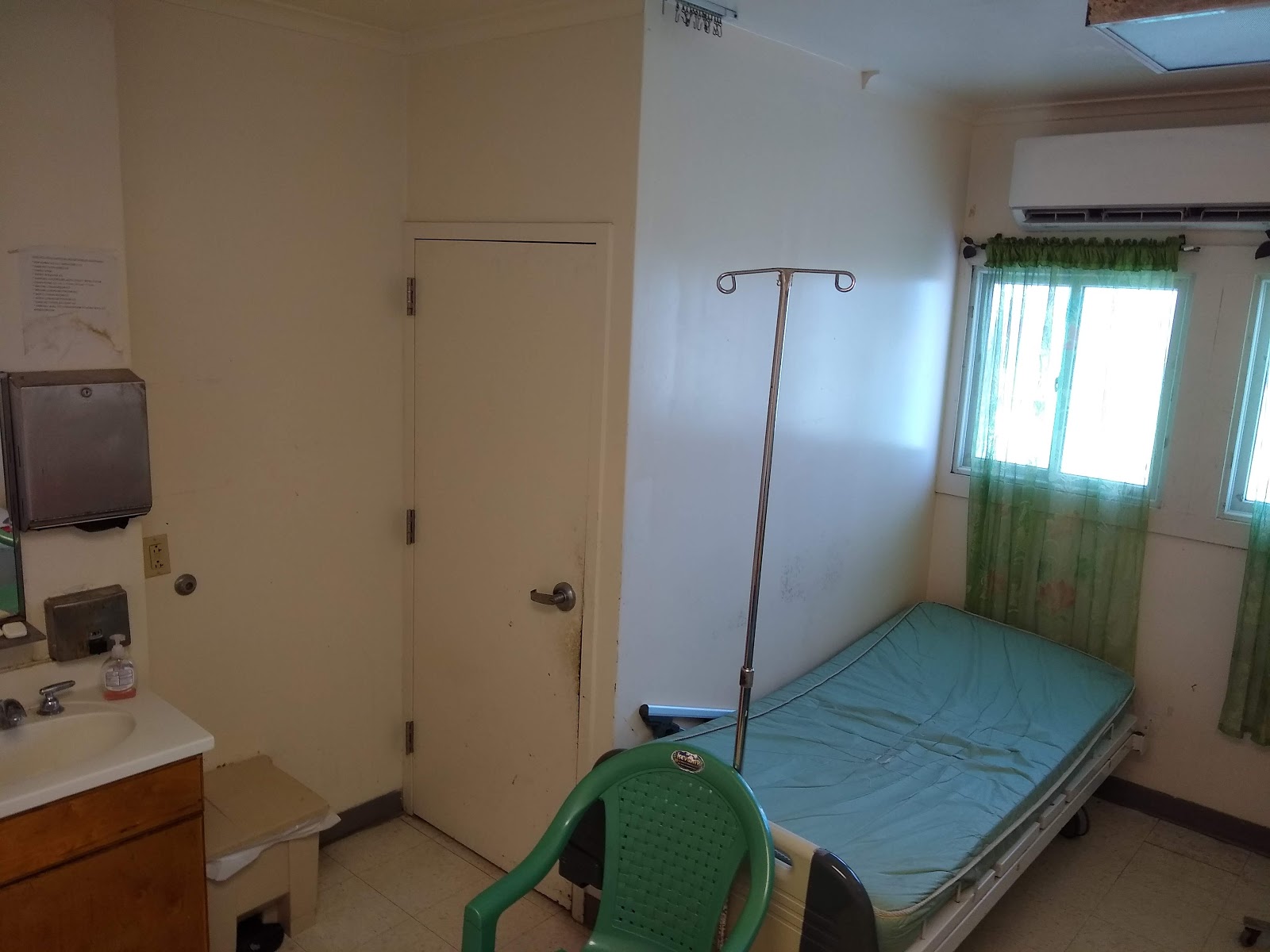 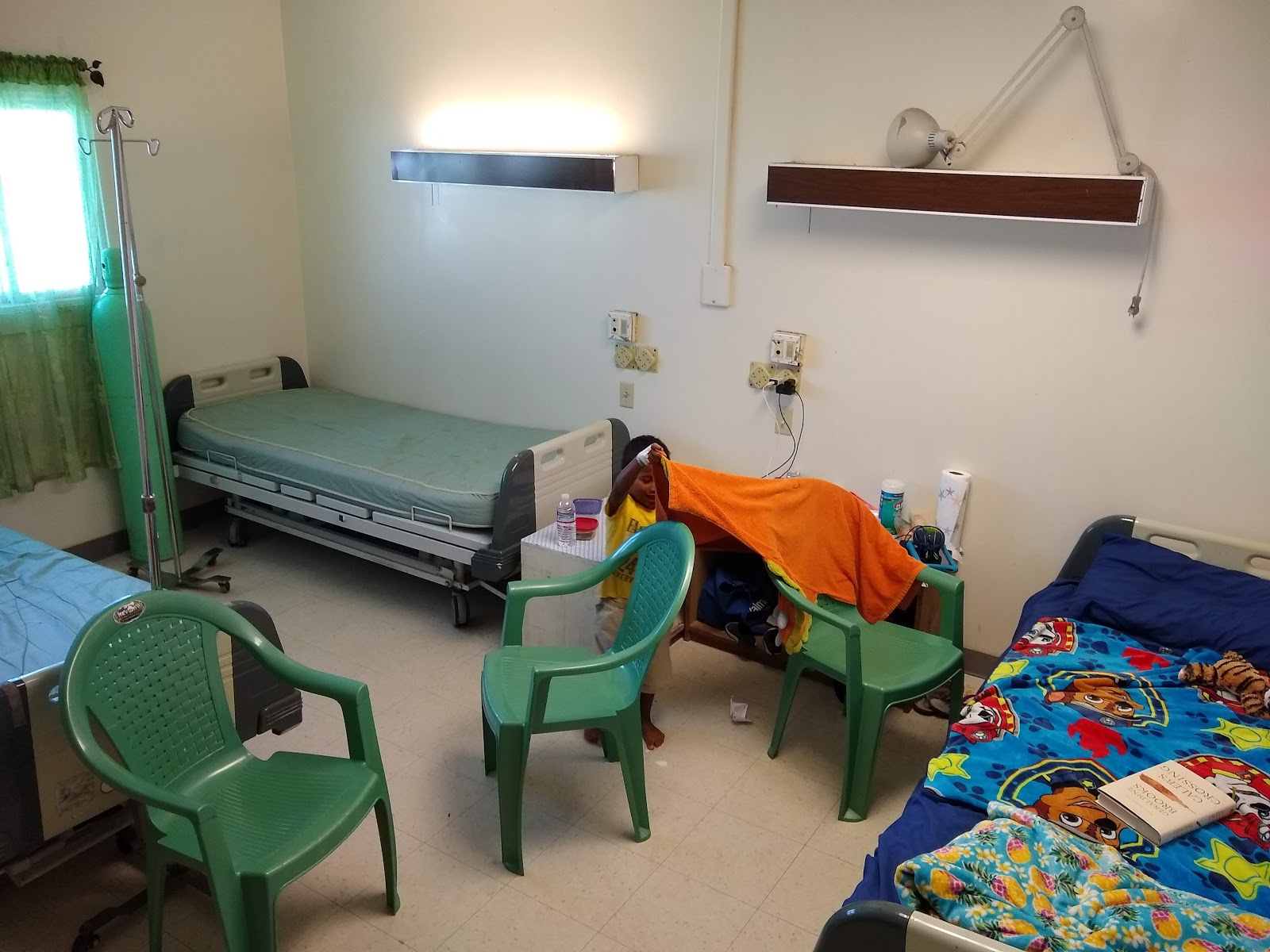 (See Earth using a towel and some chairs to make a fort?  He was definitely feeling better!) 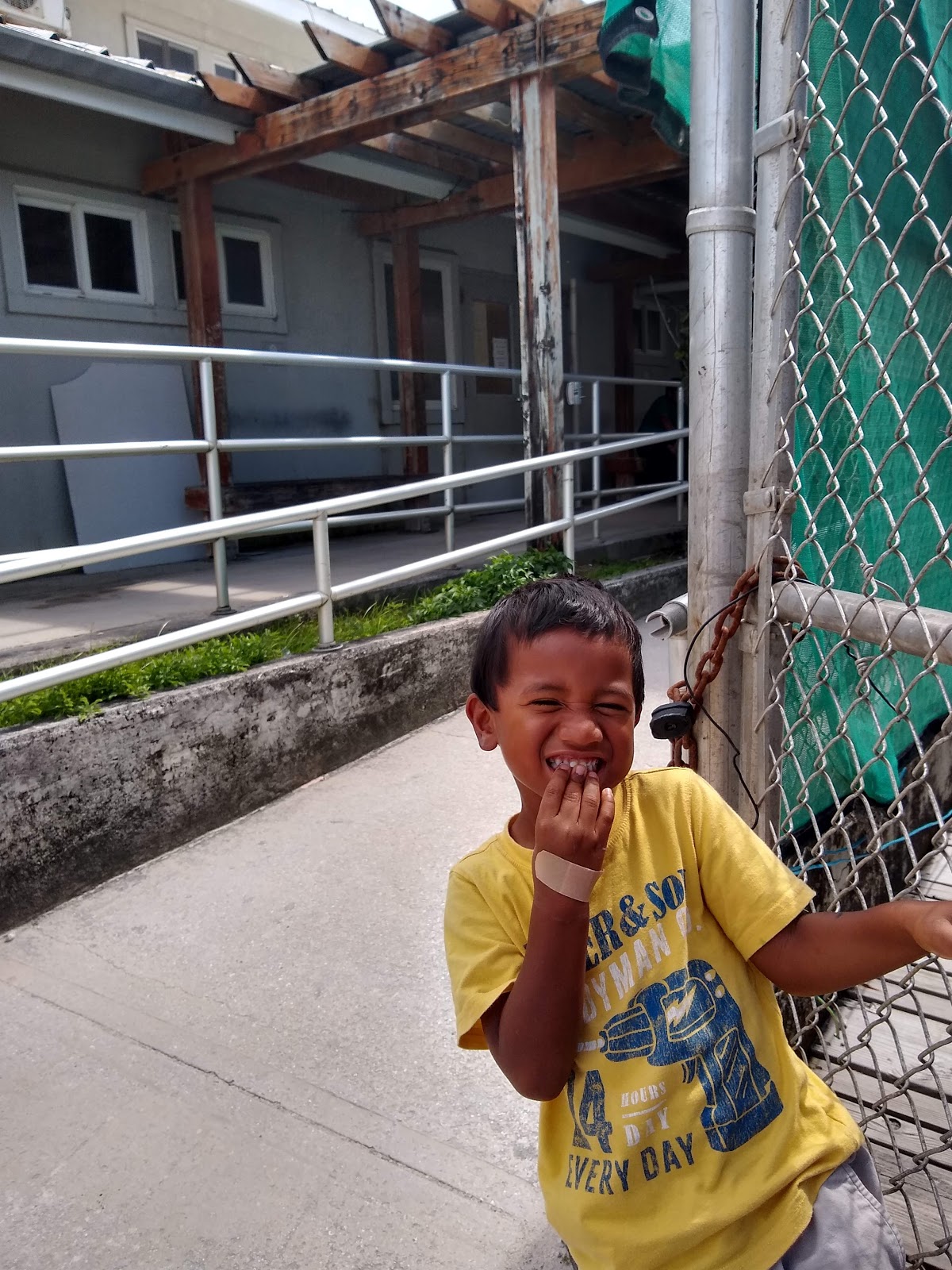 Mid afternoon on day five- released from the hospital.  We were so thankful for the amazing care we received from the doctors and nurses but glad to be going back to our own space.

Just over a week later, Earth went downhill with stomach pains and vomiting again. Back to the hospital for us, admitted again for testing. 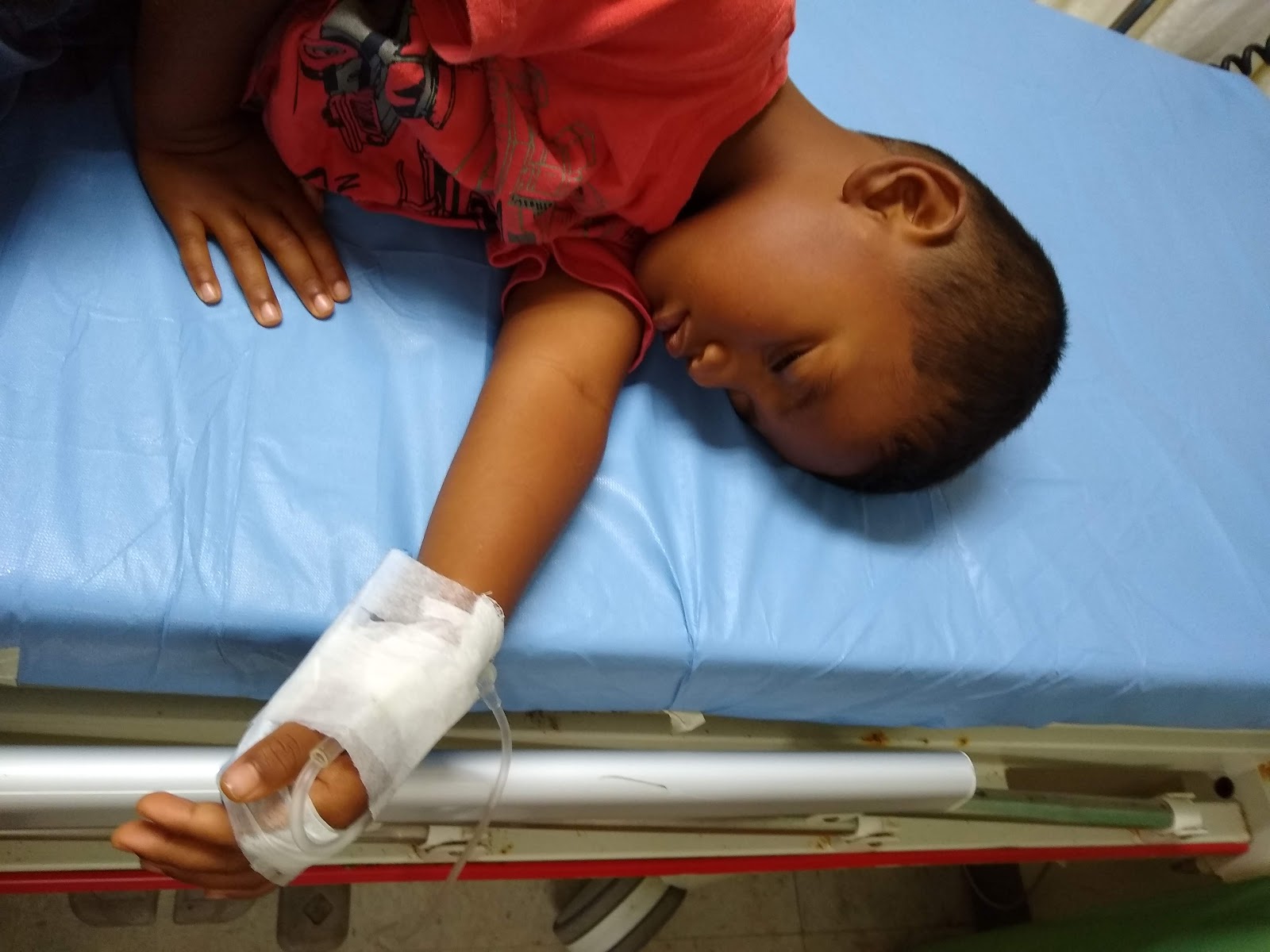 Another IV, another ultrasound, another urinalysis equals another UTI diagnosis, this time with crystals in his bladder.  The doctor prescribed him stronger antibiotics and said that the last round probably hadn't gotten rid of enough of the bacteria to beat the infection. Since he wasn't as dehydrated this time, we only stayed in the hospital for two nights and Earth improved much quicker than last time.


This kid, man, he is resilient!  I'm so thankful for his goofy, cheerful attitude and am so glad to have him better and back to his usual self. 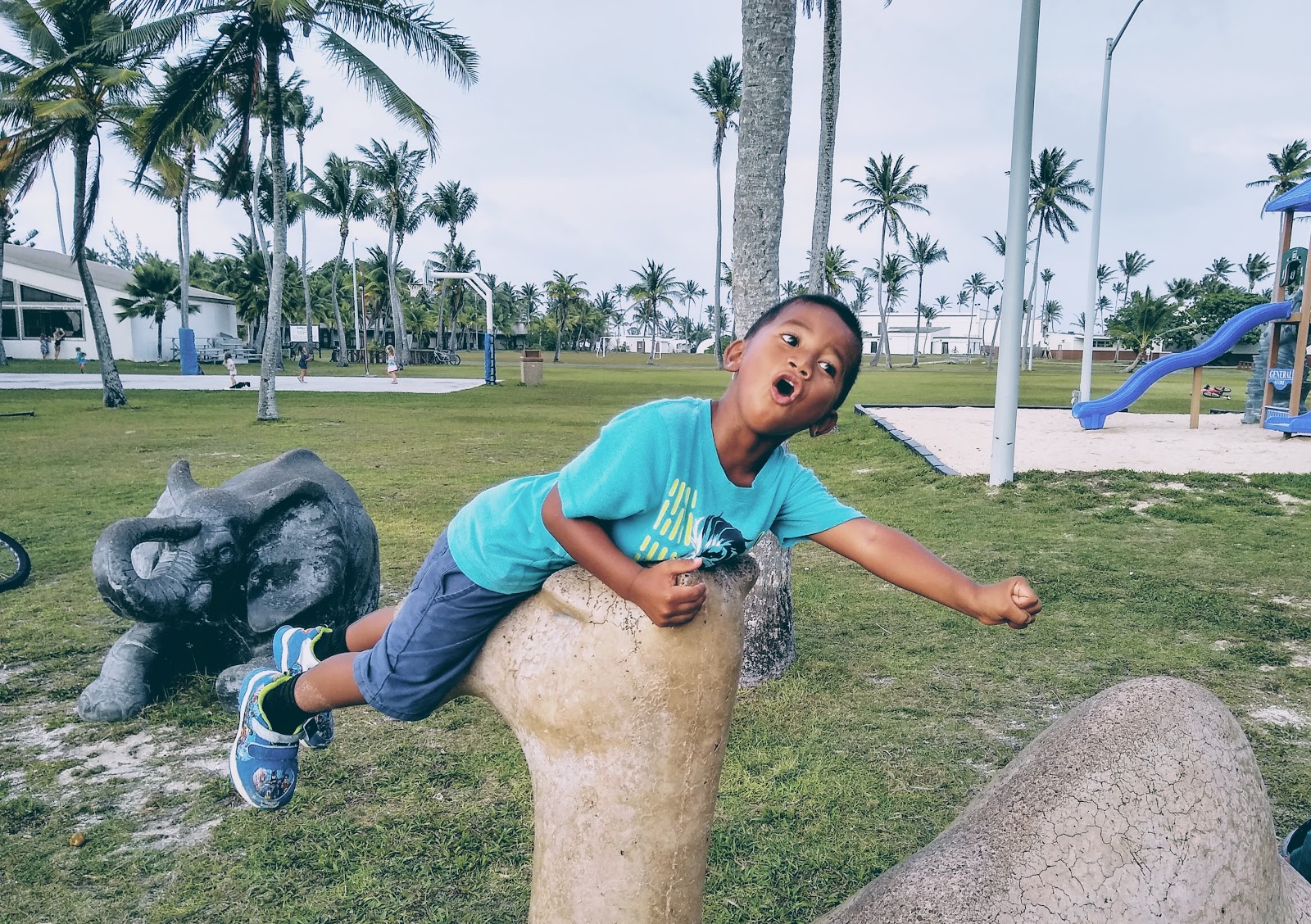 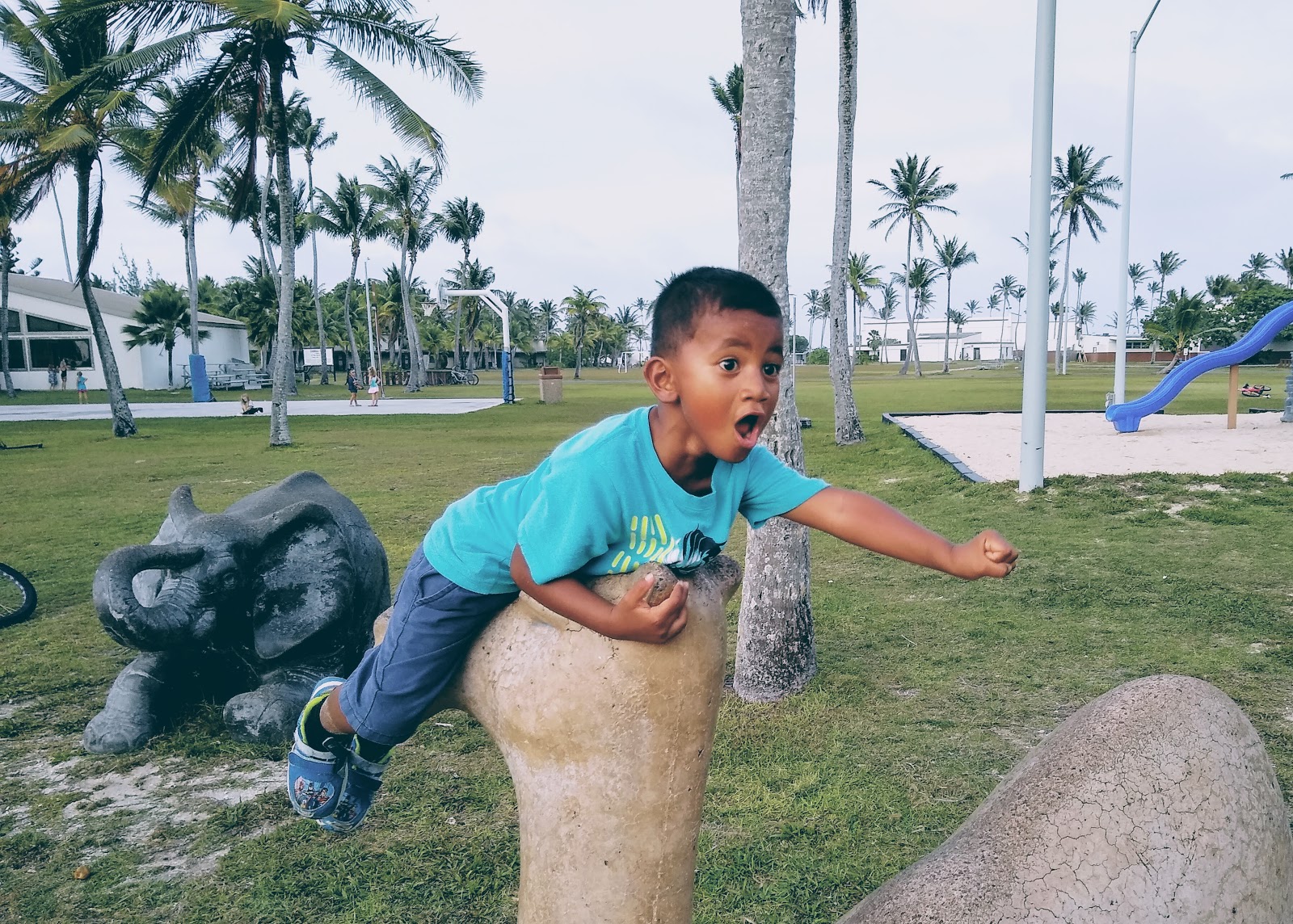