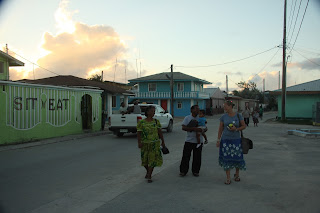 As we were leaving the restaurant on Ebeye the other night, Bubu and Jimma pulled me aside.  As the others went ahead Jimma said he had a question for me.  He pointed at J and asked, "He's your full brother, not half, not adopted?"  I said that J was but asked why he thought that and Jimma said, "You're so much darker than he is- you don't look alike!".  I smiled and started to show him my arm, with my tan on one side and pale on the other and to explain that I looked like this since I've been here for four years but I stopped myself halfway through.  I pointed at my arm, then at his and said, "Ej jematen ri-Majel kia!" (I'm  half Marshallese now!)  We all just about died laughing there in the street and when she could talk again, Bubu said that of cousre I was, I'm her daughter from Majuro.  Oh, how blessed we are to have Bubu and Jimma for our family!
Labels: Family
Location: Ebeye, Kwajalein Atoll, RMI