Our big boy is six months old today! He has been home with us for a little over 3 months and the time has flown by. Fire can hold his head up, reach for things (and then put them in his mouth), roll from his back to his front, and can hold himself up on his arms for a little bit when he's on his tummy. He loves to stand but needs someone to hold him up or to be in his play table and he still melts in half when he sits on his own.
Fire is a good eater and is already eating baby food twice a day. So far the only foods he hasn't really liked are rice cereal and bananas. He's sleeping longer and longer at night and we're working on easing him out of his nighttime feeding.
After getting off to a rocky start, Sky and Fire are getting along really well. She still gets jealous every once in a while but most of the time she ignores him or wants to hold him. Fire is wild about Sky and just about everything she does makes him laugh. Sky just figured that out recently and will ham for him if she's in the right mood. I think she's going to have a little shadow as soon as Fire learns to walk. 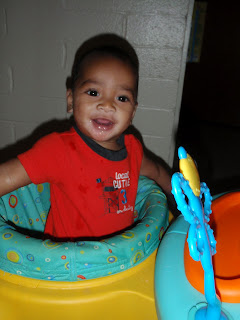