D on the Road

Ok, Ok, Ok. I'm not the best at regular posting, but I have been in Thailand for one week and there’s no A to pick up my slack, so here it is. It’s been a bit of a crazy trip. I lost my “orientation” day to a 7 hour late flight from Kwaj that left me staying in Guam overnight. Guam is like a more Americanized version of HI. So, I mostly holed up in my room. Enjoyed some AC, some internet, some alone, non-hectic-ish-ness and properly set mind on vacation. I had a long swim in very shallow ocean water, had some beers thereafter at the pool and walked around enough to decide upon a swarma for my “first meal” off Kwaj. Oh, yes, I did shop at the world’s largest Kmart, which really isn’t all that big. It’s nice. It’s bulk like a Walmart, but nice like a target, and way less miserable and soul sucking than a Walmart. Here’s pics of just what you need: Jalapenho Cheesy Poofs. En Masse. 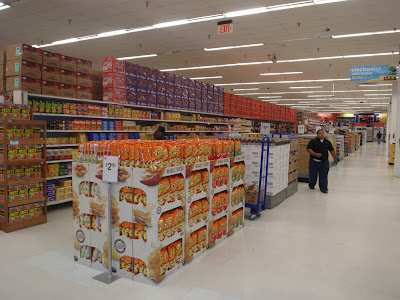 And here I am cheesing. 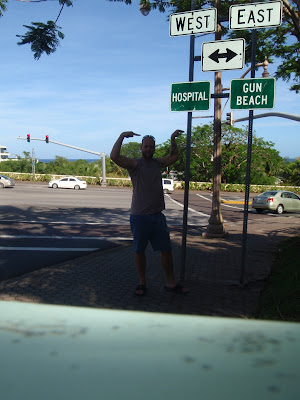 Once in Thailand, at 0130 in the morning, I took the wrong, expensive taxi, but look at this pimp retro classic Lorry! I’ll pick A up tonight, and will use city taxis for less than half price, I hope, because I’ll need one to get there also. 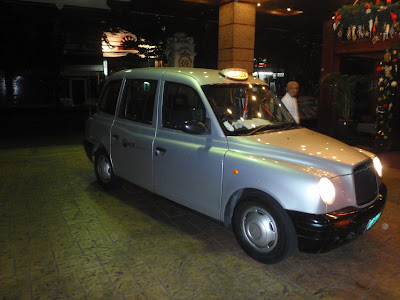 Since I lost the extra day, my first day was spent figuring out directions to the hospital,, getting my appointment, heading back to hotel to pack, back to hospital for another appointment, back to the hotel to pick up bags and then onto a crowded skytrain to go find a mini-van that would cheaply get me down to Hua Hin, where I took my three day kiteboarding class.
So, Bumrungrad Hospital. I’m in. Hook line and sinker. I want to get all my medical care done over here (thus far.) The most succinct way I could describe it is, I think the Thais have not forgotten they are providing customer service. They just said, ok, we need to find out what your problem is. How does this afternoon work? This is the free market system that the ideals of capitalism tout, but America seems to fail miserably at. Sorry, I shouldn’t put my political rants in a blog, but I have to say just once how much I hate Tea Party Extremists that claim an ideal (Ayn Randianism, really…I refuse to call objectivism) when what they’re furthering is not true capitalism, but the deadlock that is today’s aggressive monopolies (confusopolies, from Scott Adams) and simple gambling/scamming on the stock market. Sorry, again. I’m done. Ignore me.
And…Kitesurfing. Wow. I can’t sleep at night now, because in my mind I’m harnessed in and ready to roll. On this one hand, I’m actually eager to get home so I can start playing around. Here’s some pics of me: 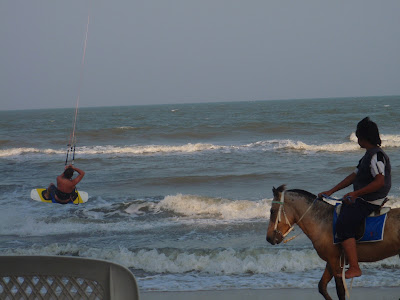 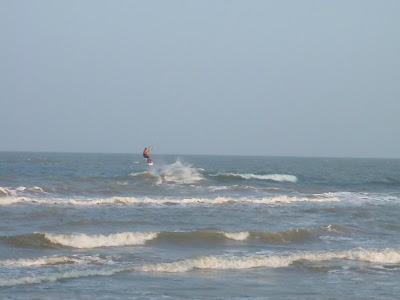 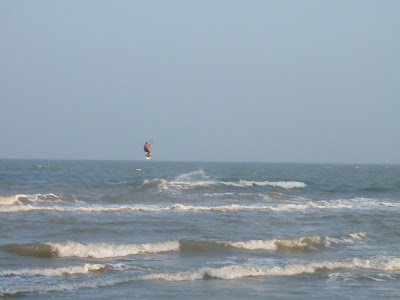 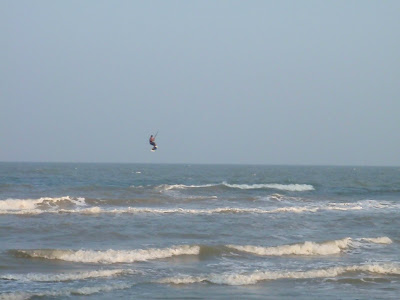 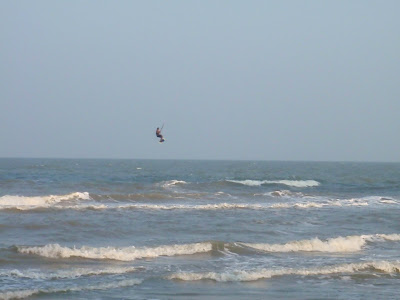 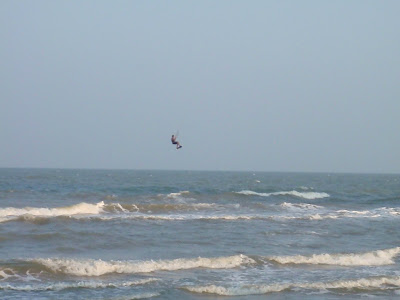 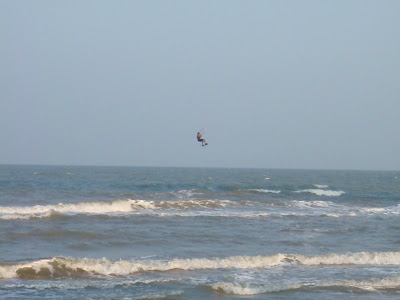 Just kidding. Who’s taking the pictures? That’s a pro out there.
I did a three day course and did well. I made my instructor yell for me to stop when he asked me to do figure 8’s, just to see how much power the kite had. He said he’d never seen anyone pull that much out of that kite. Whee! I was ready to keep going. I was a bit more soprano, and I don’t mean like the HBO special, but loving it all the same. The second day I rode some. The third day I rode a fair deal and worked on going both directions, as well as tried, and failed pretty badly to go upwind. A necessary, but hard learned skill. Prior to that skill, you spend a lot of time walking up the beach w/ a lot of heavy/cumbersome equipment. I’m absolutely in love w/ the sport, so hopefully I’ll find enough time to do it on Kwaj. I live in the prefect place, I figured I had to…
I then checked out of my hotel and tried to make my way back to Bangkok to check into my next hotel and hit another hospital appointment. That soon became, let’s try to just get to the hospital, w/ all my (new, large, cumbersome) baggage. Bangkok traffic finally made me settle on just take me to the hotel. I was crabby from not eating and late and hot. That day was really bad. At the end, I felt like I hadn’t accomplished much. I’d been in Thailand for a week and hadn’t really done a single thing like see a sight, or temple, or anything.
Granted, I travel different from A. I’m a big fan of just seeing the streets, cars, merchants, merchandise, everyday culture, and buying some local a few drinks until I get a real feel for the place. But still. One week. Nothing but hospitals, restaurants, bars (and mostly behaved at that,) kiteboarding and transport.
This morning I atoned. I followed the “cynic’s” (Lonley Planet’s) walking tour of China town. It was rough at first, as it started at a subway station leading up to a (exaggeratedly, but not greatly) 9 way instersection. So after the first hour of walking up and down all the streets and comparing the map, I began. I took the following picture in that time because I liked seeing the, well, just look: 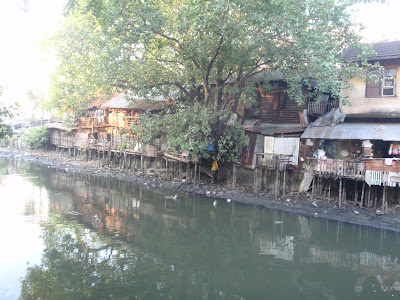 I passed by a lot of temples, but didn’t go in. I get templed out pretty quick and I know I have two in my future. Additionally, I wasn’t wearing pants. Long pants, for those who know me well enough to ask. I woke up at 0530 and dressing around sleeping hostel mates wasn’t necessarily thought out. Anyway, here’s the obligatory pics: 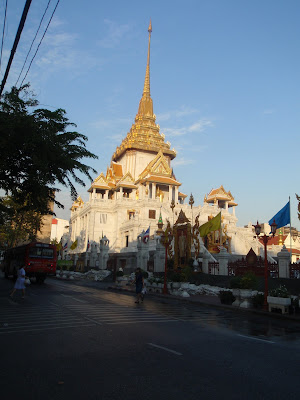 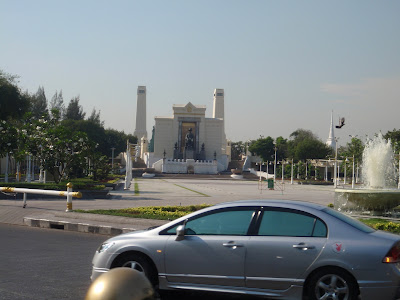 The point I REALLY starting digging my morning tour happened when it led me to these twisting little crazy back alleyways. This is what excites me, just seeing a life so far alien to my own. America, with all its space and little history compounding on top of itself, rarely leads you to such a crowded space. Philadelphia had a similar feel, but nowhere near THIS. I loved this little garden: 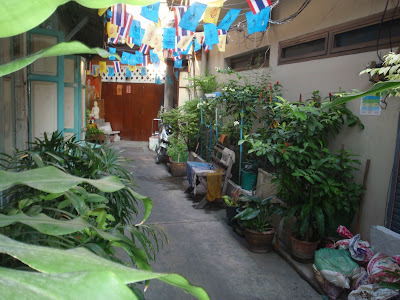 I got to see the streets really starting to awaken. I don’t think I’ve ever seen a girl on the street give me whiplash like the smell of this little coffee stand: 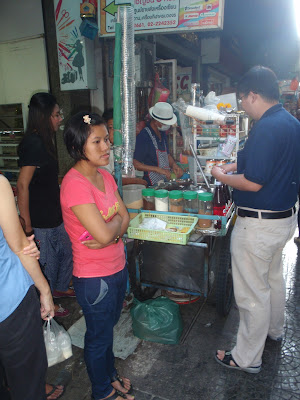 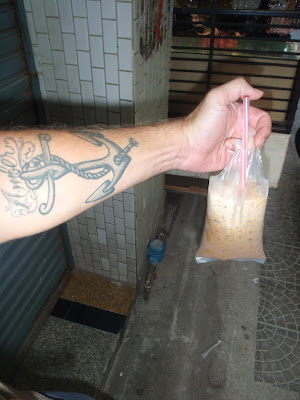 So good! So, so good! I didn’t mention breakfast was street-meat chicken, fruit and Chinese street fired donuts, did I? At the coffee, I was really disappointed A couldn’t be with me having one of those. (Also, often felt like having my baby to show off.) I knew I was in the right place because the whole street was customer-less and this little coffee cart had about 5 people standing waiting.
I then went through a lot of little markets. China town doesn’t hassle you w/ sales, which is nice. The food markets were awesome: 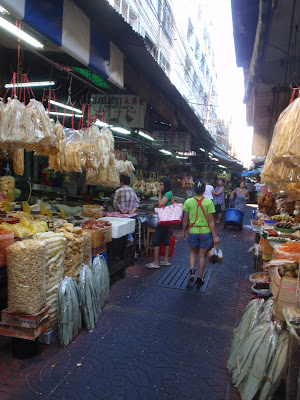 A lady making a cauldron of soup starting w/ about 3 huge whole chickens: 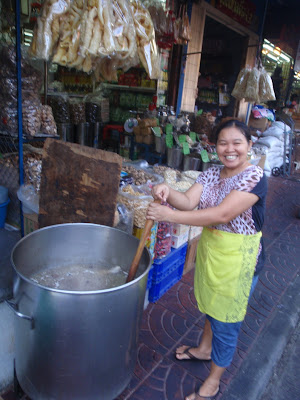 Wow, I wanted to go back for the final result.
I did pretty well following the guided walking tour considering how high maintenance stopping, reading, comparing maps, and checking unclear road signs was, but one wrong turn, and little concern about that fact had me cut and pasting the tour. Then I rapidly just decided to follow my own paths. I ended up on a wrong street and wanted to see where it went. It should have gone to the other subway station, but I had misread, headed away from any subways, and instead moved toward a boat station that would do me no good. So I returned to my usual solution. The moped-taxi. Fast. Cheap. No scamming/ haggling. Very convient. These guys dart in and out of traffic like nothing else. (Knees in, if you dare it.) Here’s a great pic of him swearving in and out of traffic while talking on his cellular: 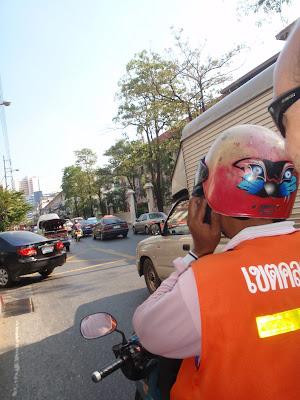 Am I any better? I'm holding on to the back and taking a picture at the same time.
Ok. I posted. Hope I didn’t lose my readers. If you just scanned the pictures, rad. That’s what I’m here for! Trust me, I understand. I will now pass the torch to A, whom I am SO eagerly awaiting. And my girl! I’ve got both the girl's beds made up, w/ stickers for Sky, a stuffed pet, the room clean and organized, and both their pajamas, ready, at an arm’s reach.
Labels: Thailand
Location: Bangkok, Thailand