Into The Jungle: Day 3 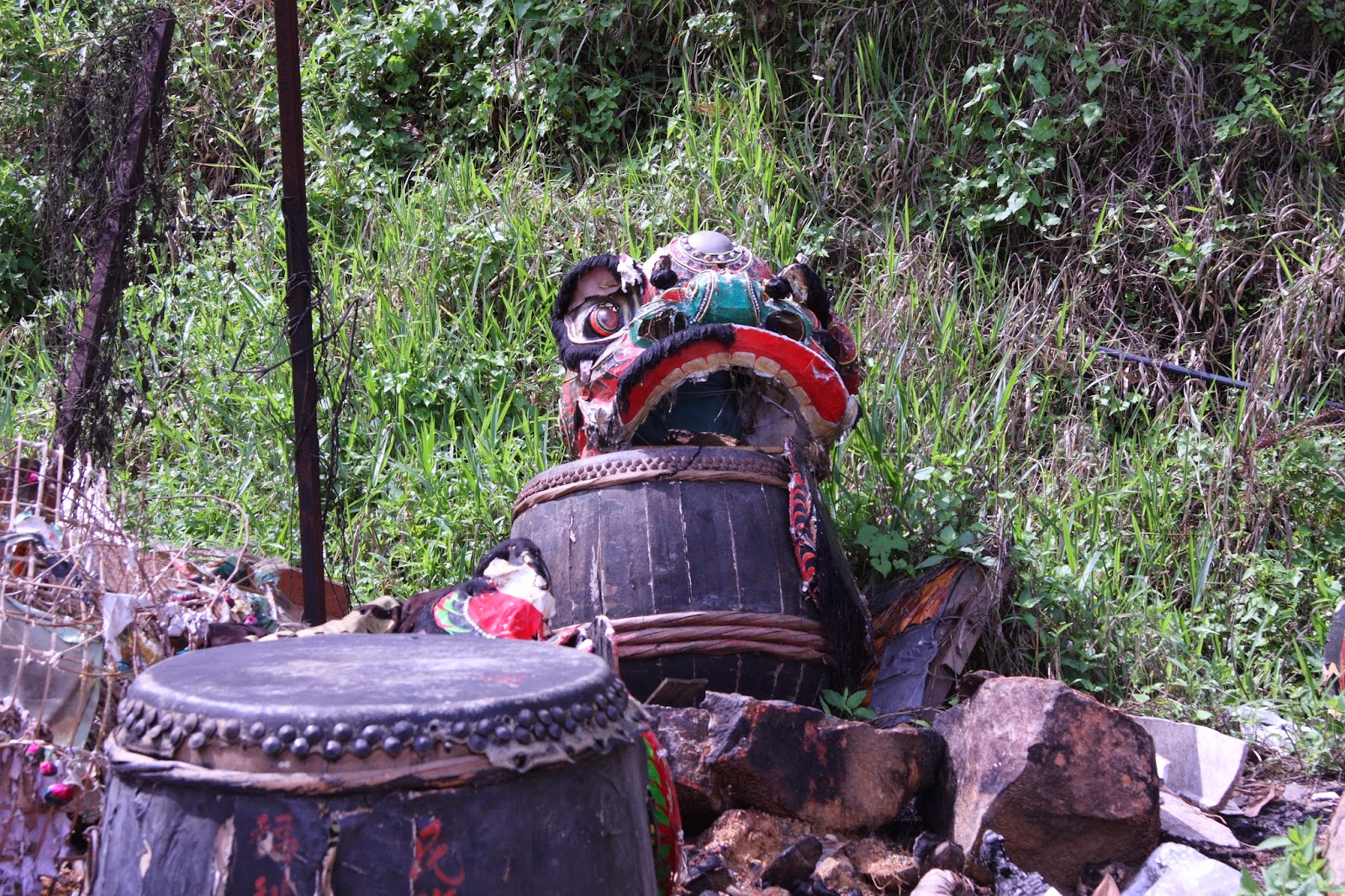 A dragon in the trash!
(This was in a pile by the side of the road- maybe tossed after the New Year's celebrations?)
Chasing pigeons﻿
﻿ 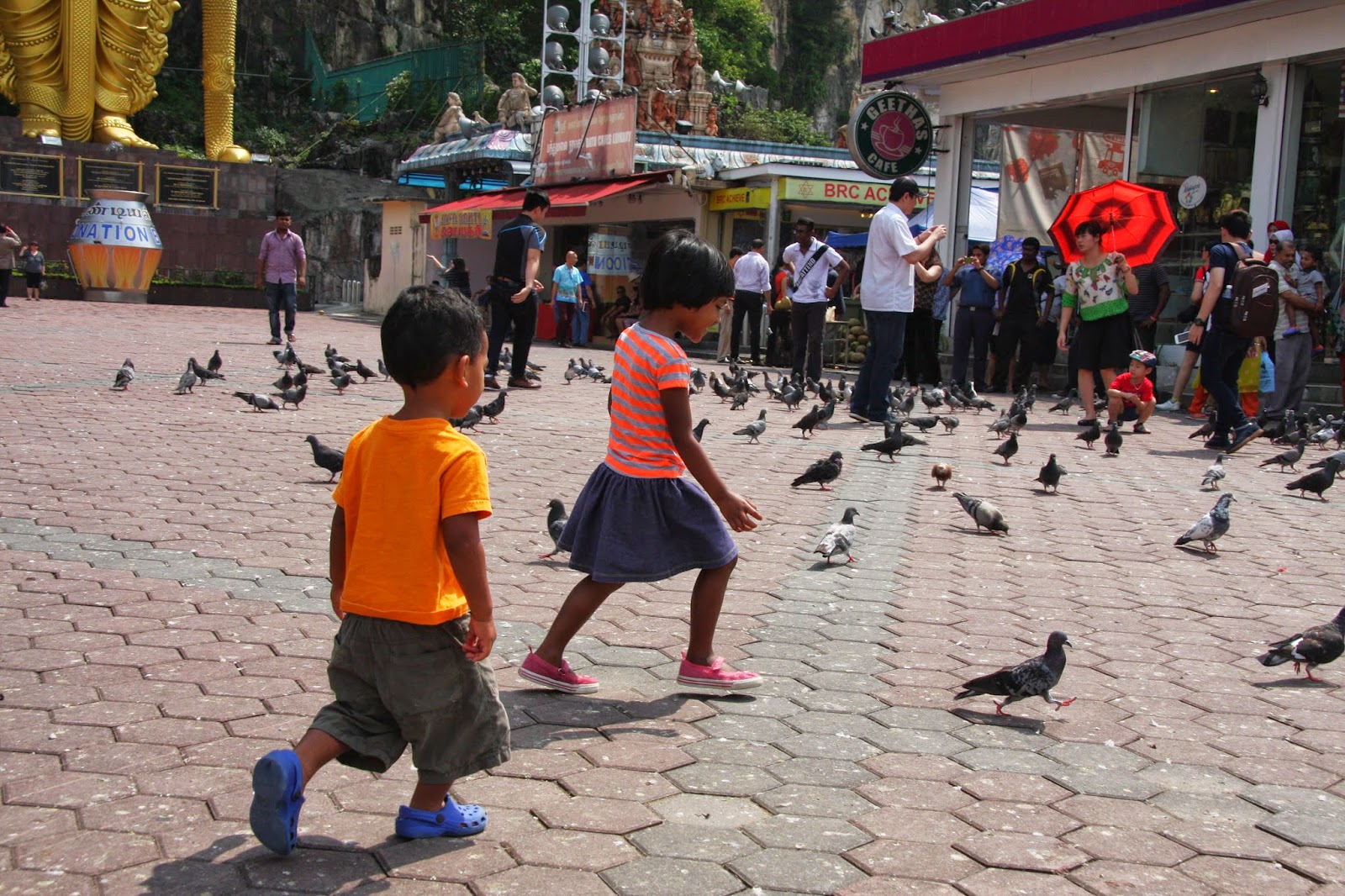 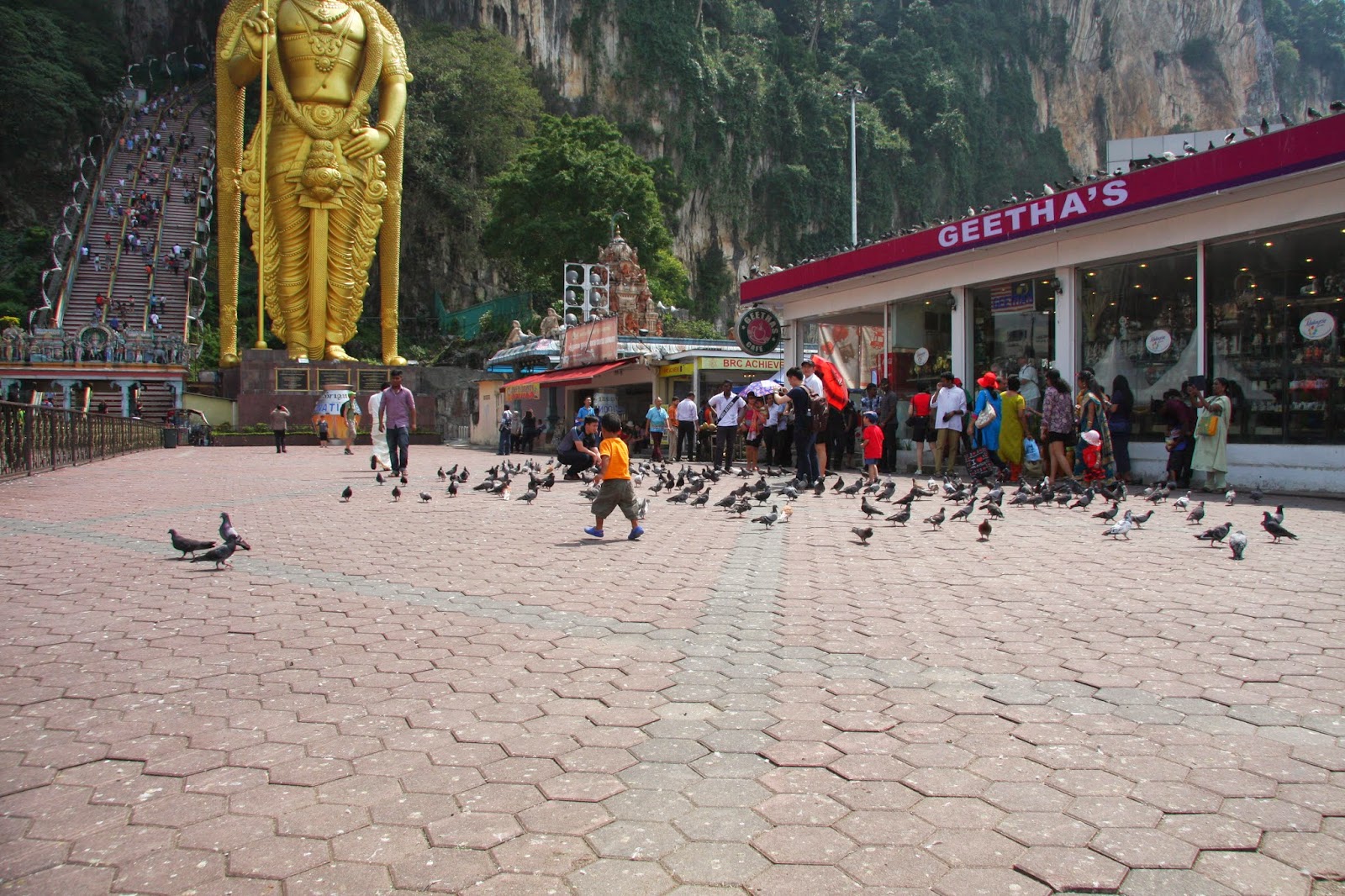 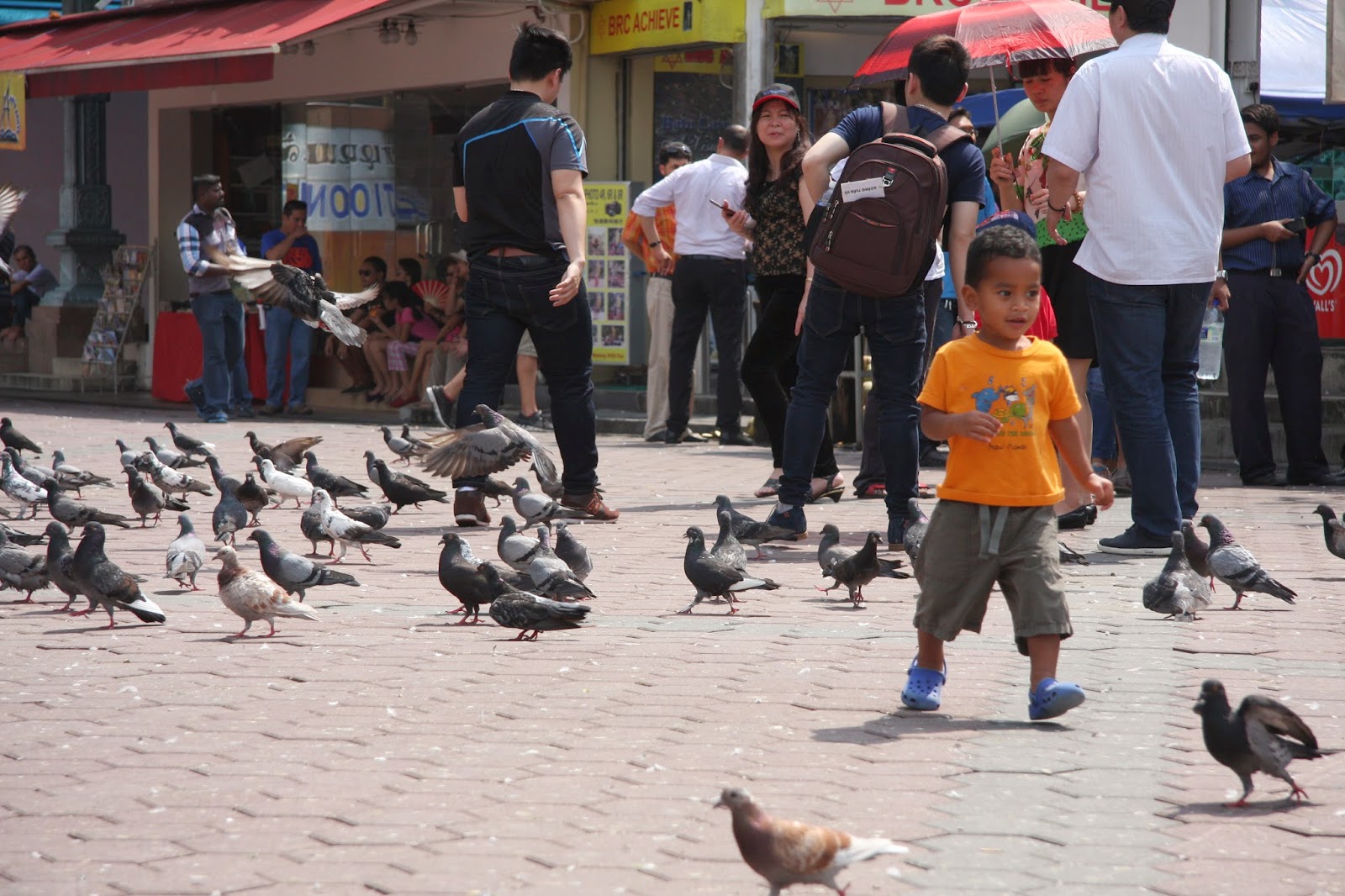 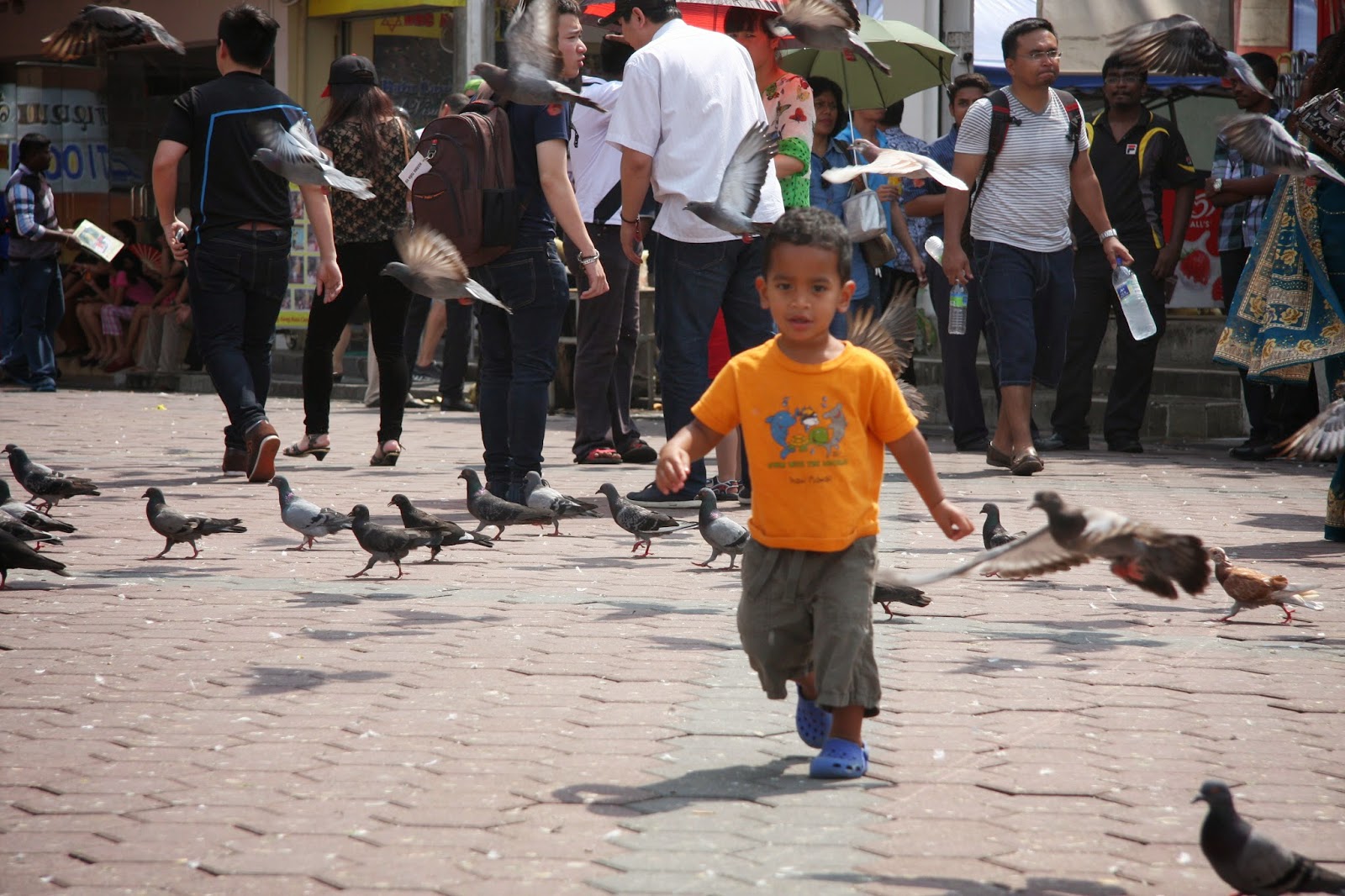 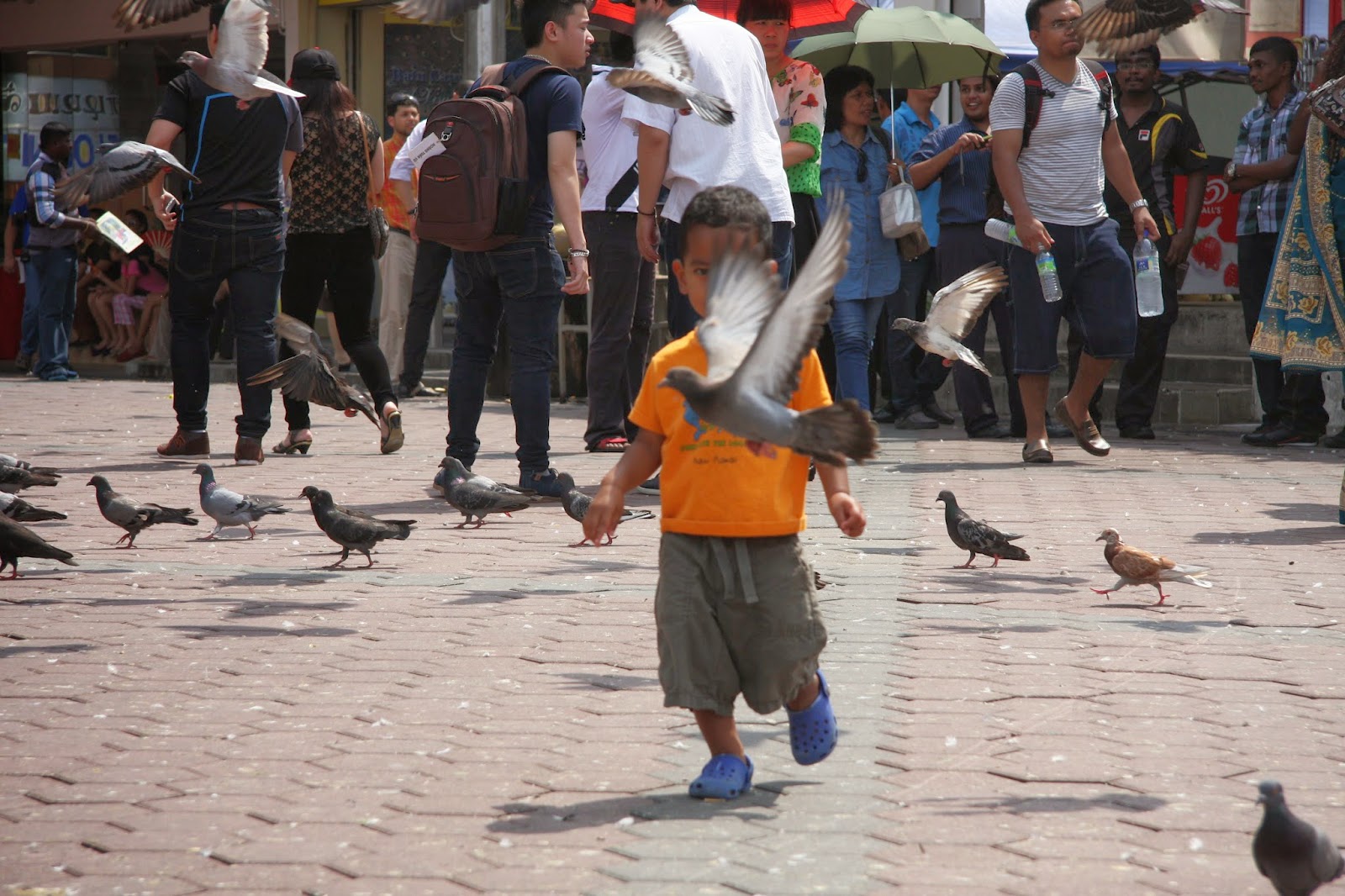 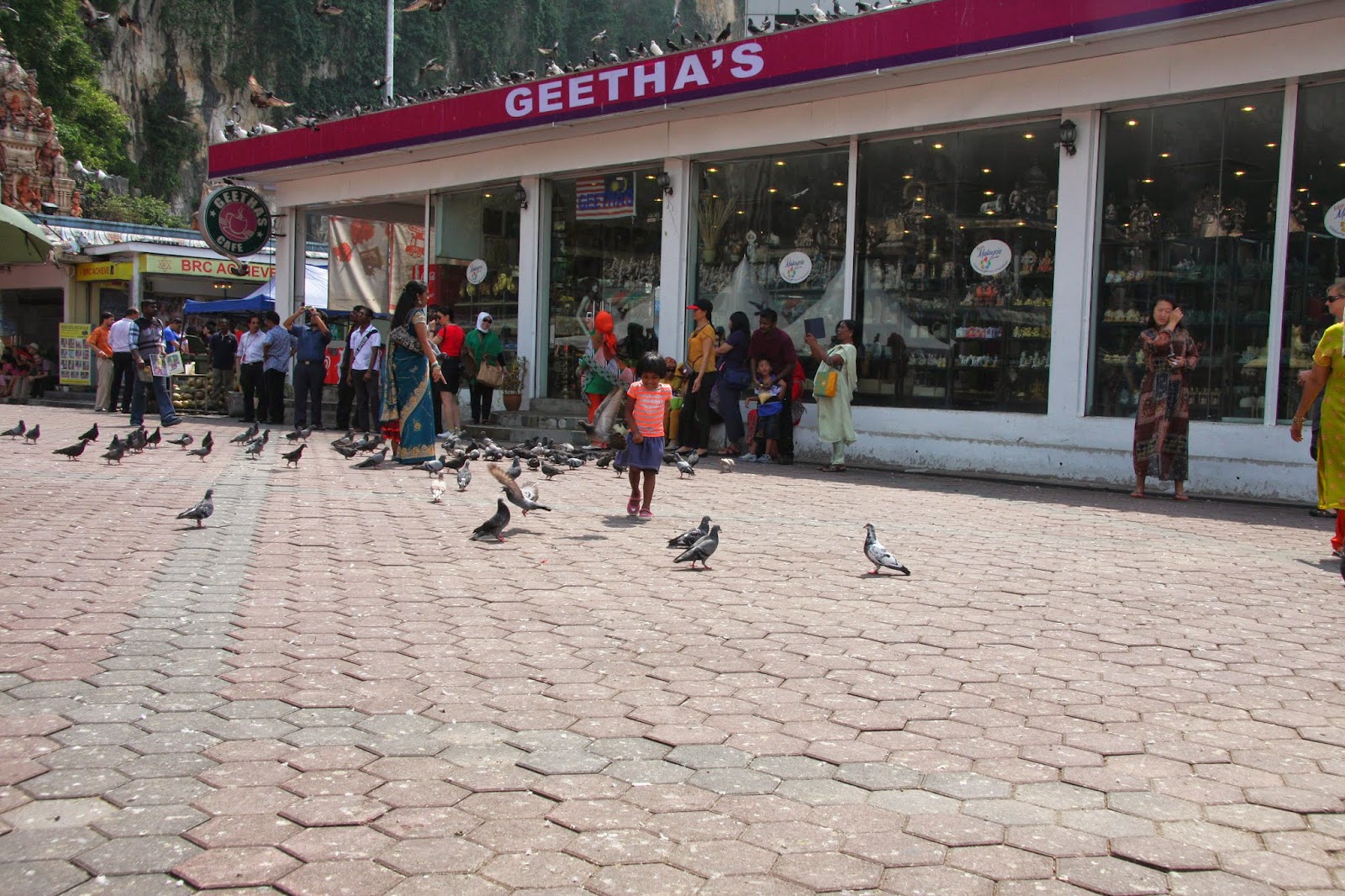 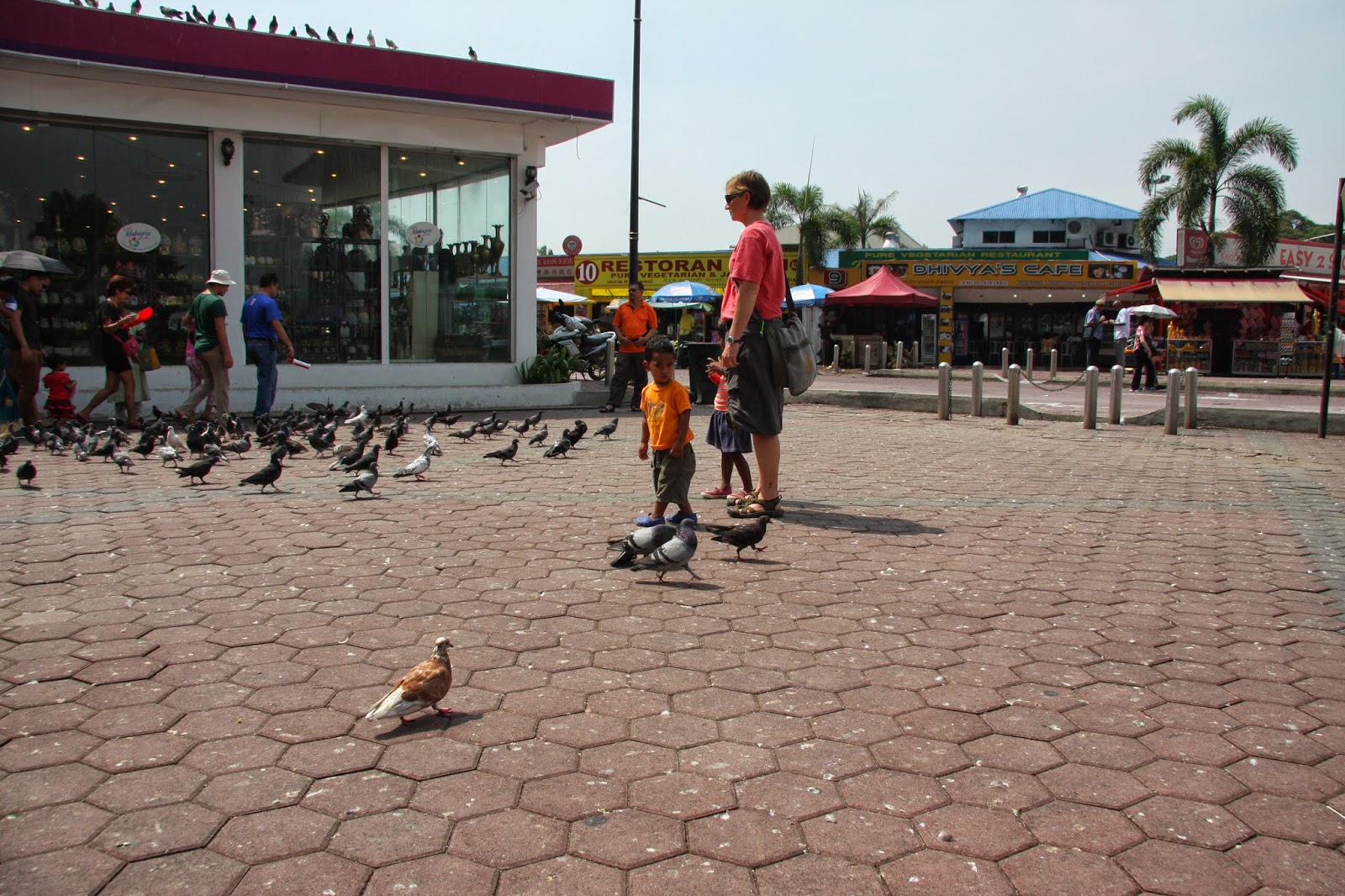 Monkeys on the way up to the caves﻿ 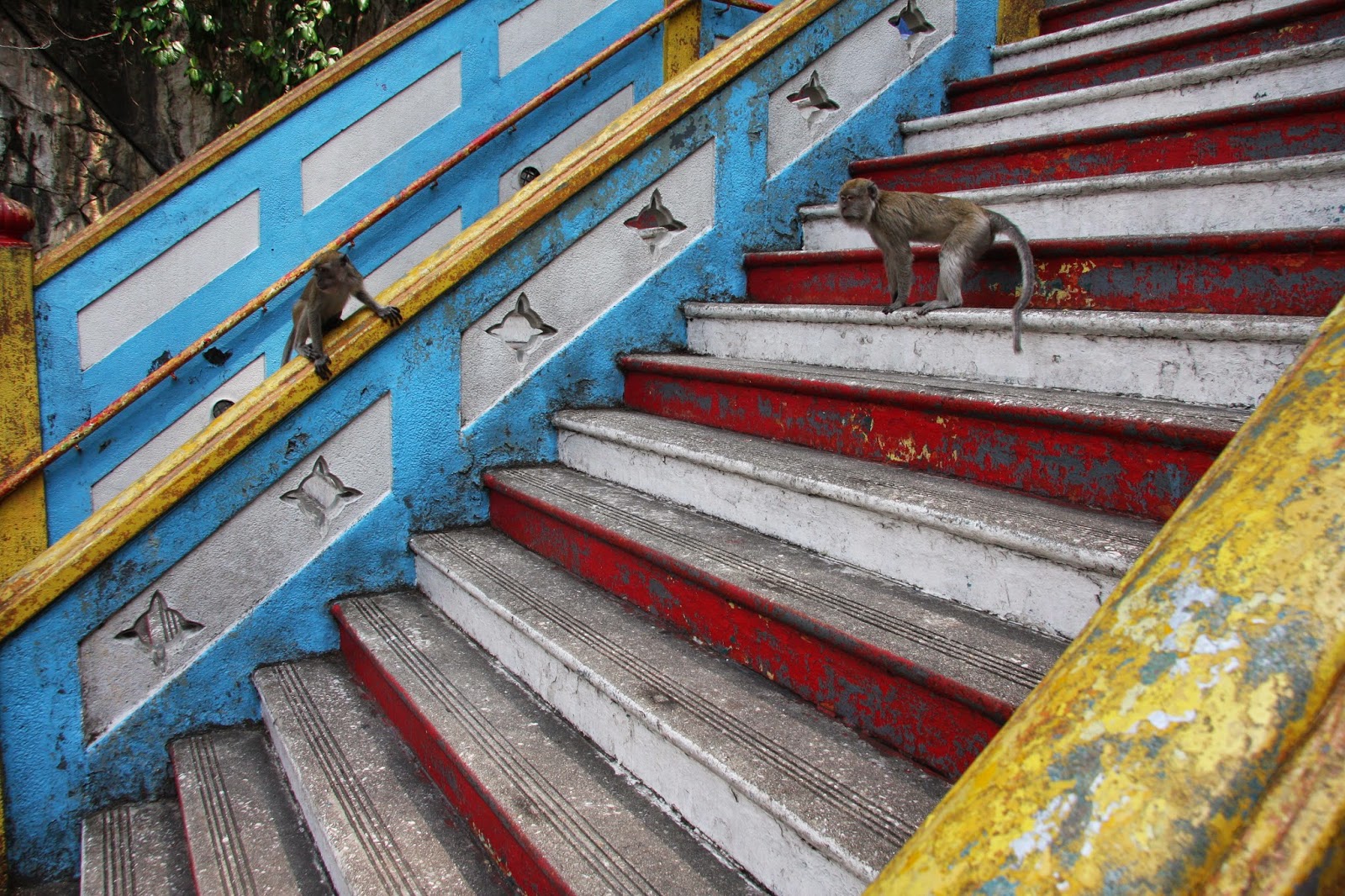 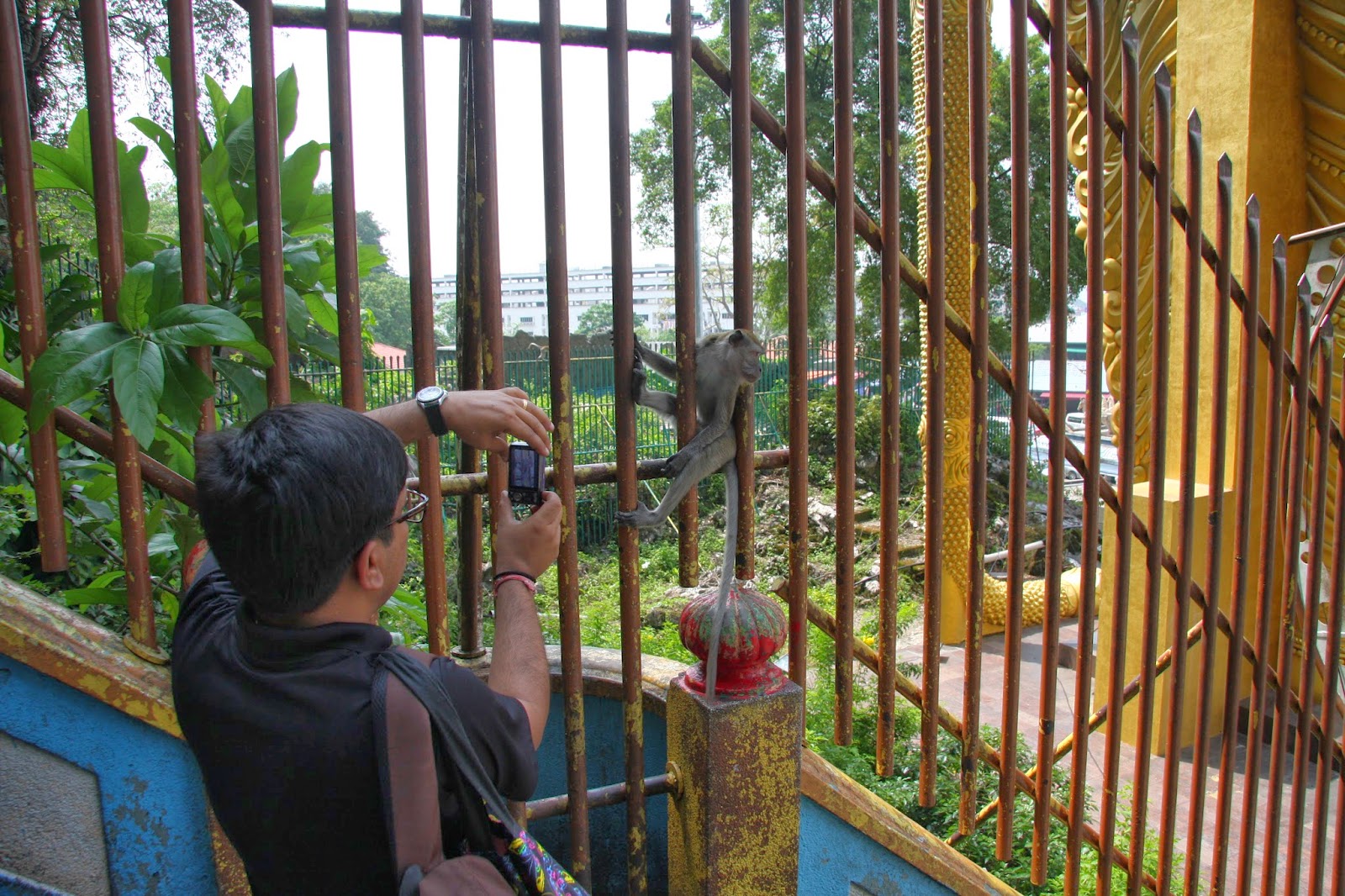 There are 272 stairs up to the cave temples. Don't let this picture fool you- Sky climbed almost all of them!﻿ 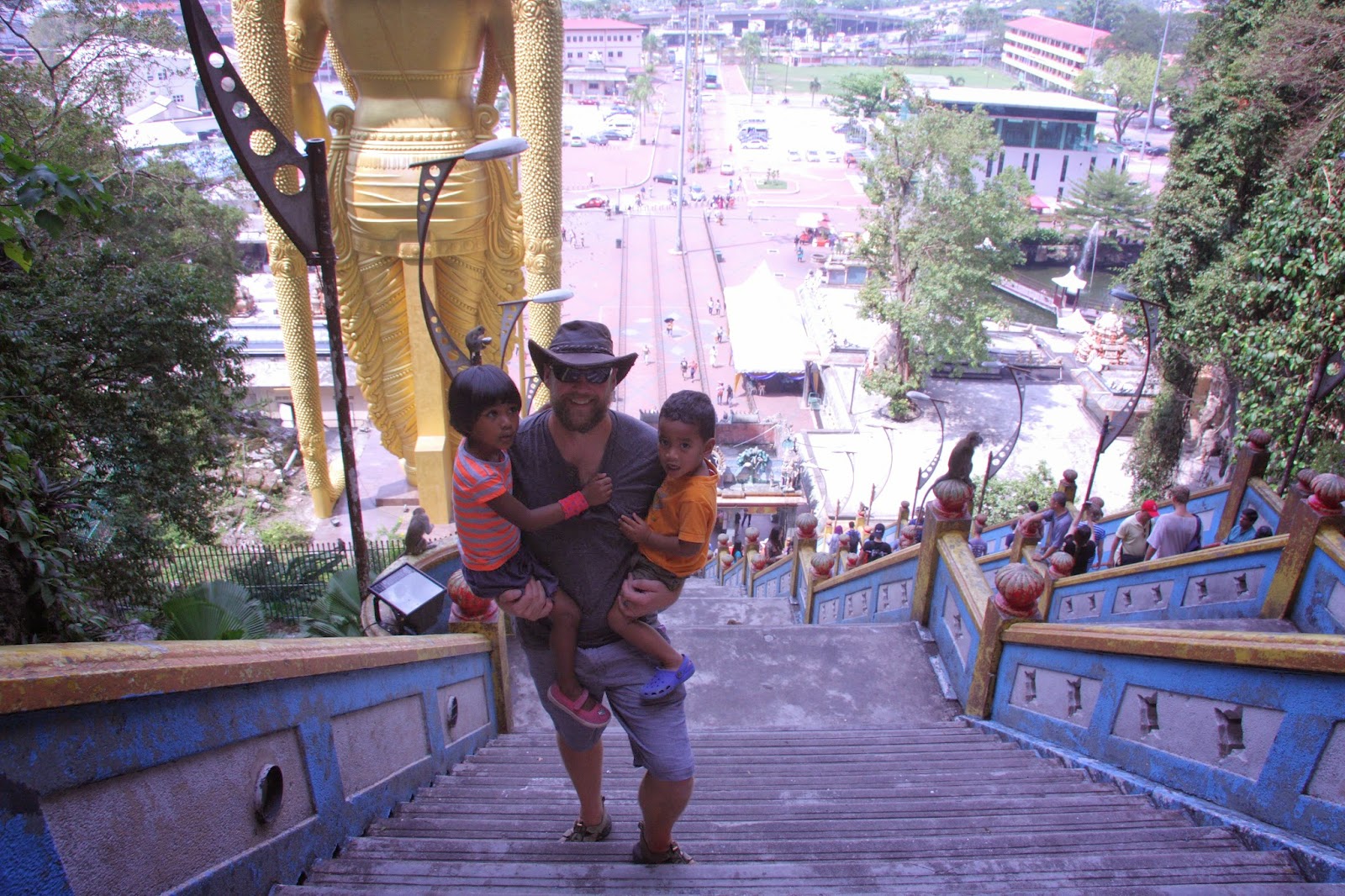 Me and my big girl, taking the stairs 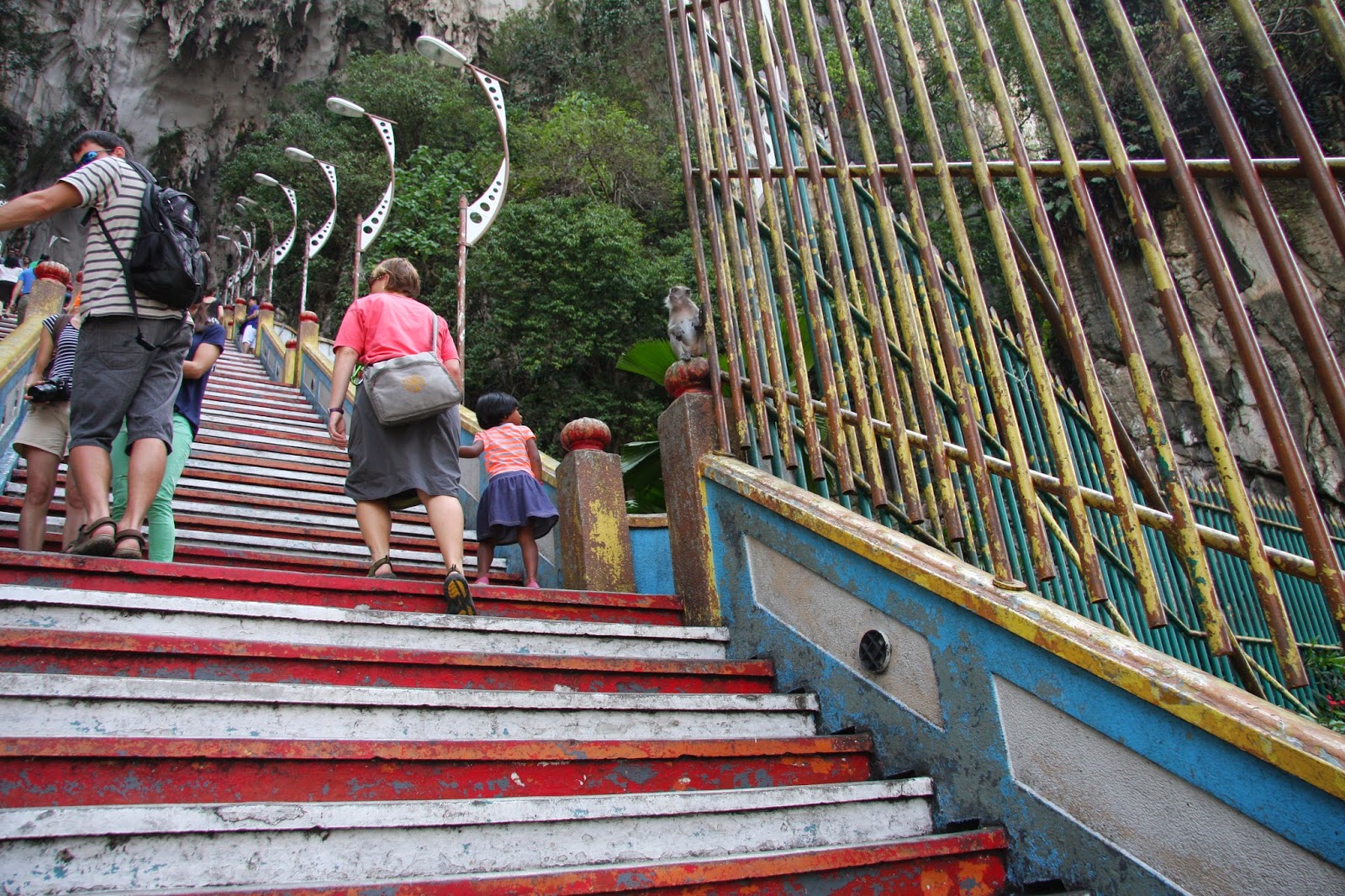 The central temple at the Batu Caves﻿ 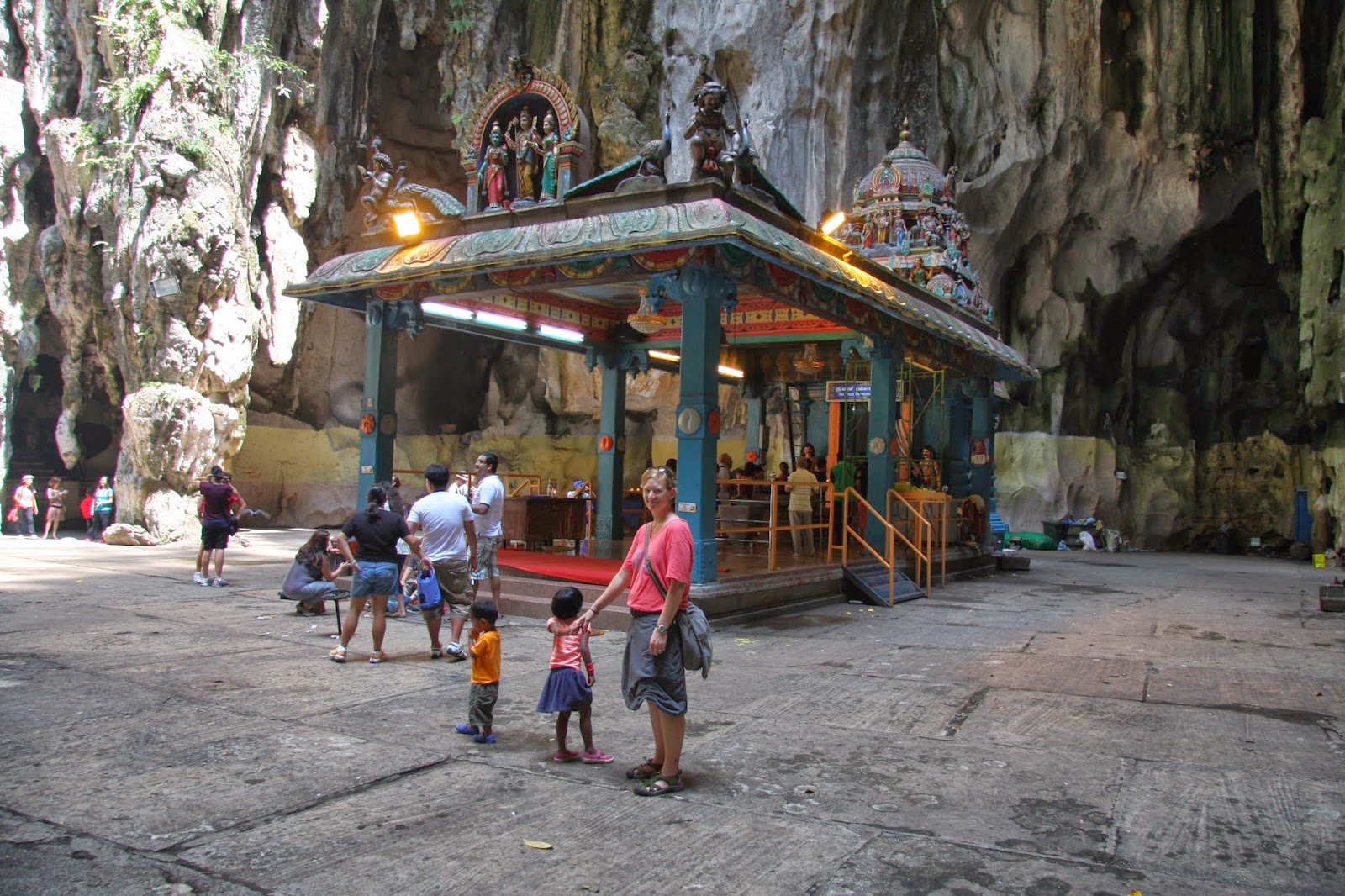 We'd made it through that rocky night with Fire and were on our way out of the jungle. D and I were really looking forward to our hotel for the night- a very swank one in Kuala Lumpur and we were looking forward to getting the kids back on some familiar ground, with playgrounds on it.
Our first stop on the way into KL was at the Batu Caves, a Hindu temple complex built into a limestone rock formation. The kids chased pigeons around in front for a little while and then we tackled the stairs. Fire still wasn't feeling great and the steps would have been a bit much for him anyway, so he got a lift for most of it. Sky was a champ though and climbed most of the steps with me. The caves were actually large open spaces, four or five storeys tall, with small shrines and temples to individual gods around the edges. Sky started asking questions about the temples and what the people in them were doing, so I told her that this was their version of church, that they see God as many small gods and they worship each part, rather than the whole. I love that she's asking questions like that and I can't wait until it makes a little more sense to her so that we can dig into our faith more.
We had lunch at a wonderful vegetarian Indian restaurant and then went on a treasure hunt. Ooh, treasure hunt, sounds like fun, right? That was just how I ended up thinking about it as we stopped at bank after bank so that I could get money to pay our guide. It was hugely frustrating and embarrassing and after four, it was clear that my bank had cut off my card (I used it all over Singapore- I'm still not sure why it was cut off in Malaysia). D was able to get enough money out and we paid our patient, excellent guide and headed off to the lap of luxury: Traders Hotel at the Kuala Lumpur City Center.
We had an upper story room with a view of the Petronas Towers. There was a huge playground right out the back door and an aquarium right next door. After we got the settled into the room, we headed over to the mall at the base of the towers for some diversions and maybe some dinner. We would end spending way more time in that mall than I ever wanted to but initially it was great- lots to look at, lots of food options. We had Chili's for dinner and then took the kids to see the Lego movie. It was Fire's first movie in a movie theater and both kids really enjoyed it.
Bedtime that night went really smoothly, which D and I definitely needed by then. We had a suite so we could follow our usual bedtime routine and leave the kids to fall asleep in their own room. We splurged and ordered room service for desert and talked while looking out over the city. While I really enjoyed being out in nature, and would definitely recommend the junglestay to anyone looking to get away, it was so great to be back in the city and at a nice hotel. I wish we could have stayed there longer.
Labels: Family Malaysia