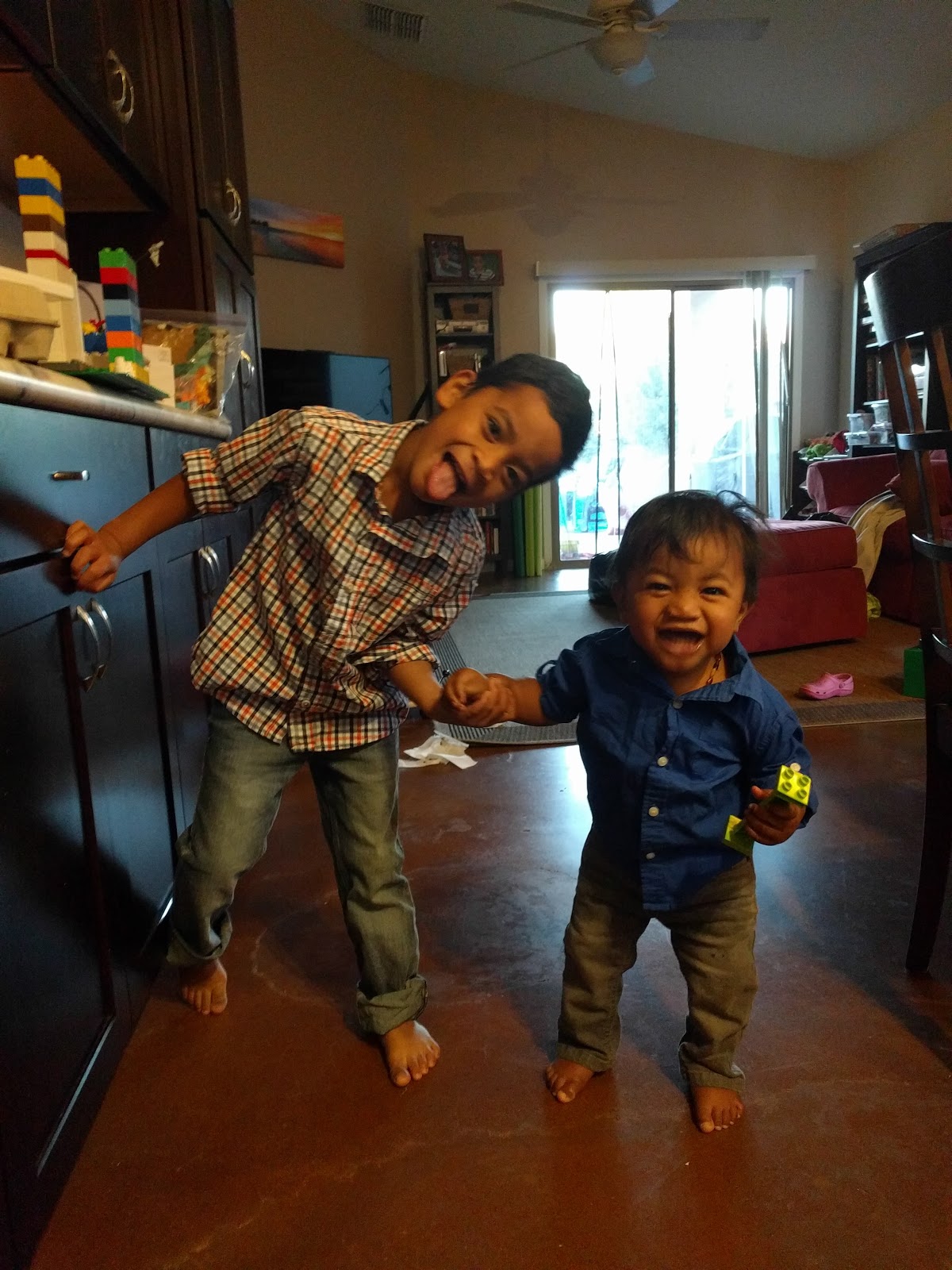 This boy, my friends, has had a rough couple of years.  Remember this post about the issues we were going through just before we moved back to America?  Well, I think we're finally on the upside of things here and it feels so good.
A big part of the change we're seeing in Fire is the explosion in his language skills.  He is finally speaking in full sentences and can enunciate his words enough that we can understand him.  He doesn't always have the vocabulary to describe what he wants to say and his syntax (the structure of his sentences) is off but he can communicate and that's the most important part.  All that growth is thanks to one thing: starting a new school.  When he started at his new preschool, he had to find a way to make himself understood.  His old friends and teachers knew him and knew what he wanted.  They understood his grunts and pointing and silly noises and let Fire express himself with them but new teachers and new friends forced him out of that comfort zone.
On the heels of language expansion has come learning- we had been worried that Fire wouldn't be ready for Kindergarten in the fall but now he can identify all the letters, upper and lower case, and their sounds, numbers up to 10, and all his shapes and colors. Every day, he asks (over and over and over) what letter words start with and what letters put together spell.  I'm so proud of all the hard work he's done this school year and can't wait to see what the rest of pre-K brings.
Working with the behavioral therapist has helped us target three other areas where we were experiencing conflict with Fire: screaming, when he's hungry, and waking up from sleep.

Screaming:
We have been dealing with Fire's screaming since he was 8 months old.  Lately, it has manifested itself as his main form of expression when he's angry and frustrated.  I told the therapist about how Fire will scream over me when I try to talk to him and she recommended that I just stop talking to him at that point.  She said that when he gets to that point he can't process sound any more, that we just sound like the adults in a Charlie Brown movie, so the best thing to do is to just stop.  It usually happens when Fire has gotten into trouble for something and is refusing to accept the consequence (a time-out, for example).  If he screams over me, I'll stop talking and hold up my fingers like I'm counting to five.  Fire knows what he did wrong and what he needs to be doing now and he can see that I'm counting to give him a chance to make a different choice.  So far, it's working.

Hungry:
Fire is ALWAYS hungry.  He always wants something to eat and it can be impossible to get him to wait for dinner.  When I mentioned his breakdowns about this to the therapist she asked me why I don't just give him more food.  It seems like an obvious solution, right?  Fire is hungry/hangry so give him something to eat.  In order to do that, we've had to change our rules around snacks.  The kids now eat a snack when they get home from school rather than in the truck right after school (I don't know why but for some reason, the regularity of eating at the table has helped).  I make sure their snacks have fruit and either a protein or carbohydrate portion.  If they're still hungry after their snack, they can have a protein or carbohydrate, whichever wasn't already in their snack.  After that, they can have all the baby carrots and cherry tomatoes they want until a half hour before dinner. I've also started keeping sugar-free gum and mints in my purse and they can have one of those if they ask.  Little changes but we've seen big results.

Waking Up:
Fire hates being woke up from sleep.  It doesn't matter if it's in the morning before school or after a nap.  He will throw the most magnificent screaming/hitting/kicking tantrum if you wake him up before he's ready to be up.  This was getting to be a problem because his tantrums were taking up the entire time he had to get ready for school and throwing off the whole family's morning.  Our therapist had two suggestions here: no naps after school and a different kind of wake up routine in the morning.  Fire will typically only take naps in the afternoon if we're in the truck driving somewhere after school so now I plan my days to make sure that we come right home after picking him up.  Our new morning wake up routine involves using lights and music to wake the kids up more naturally and no pressure to make it to the table for breakfast.  I start with gently lights and sound a little before six and gradually turn things up until their eyes are open.  After that, I make sure they know where their school clothes are and generally stay out of the way until they make it out of the bathroom.  This new, slower, hands-off routine has meant that they haven't gotten to watch TV before school as often and that they've had to eat breakfast on the go (if at all) but it's all but stopped the morning tantrums. 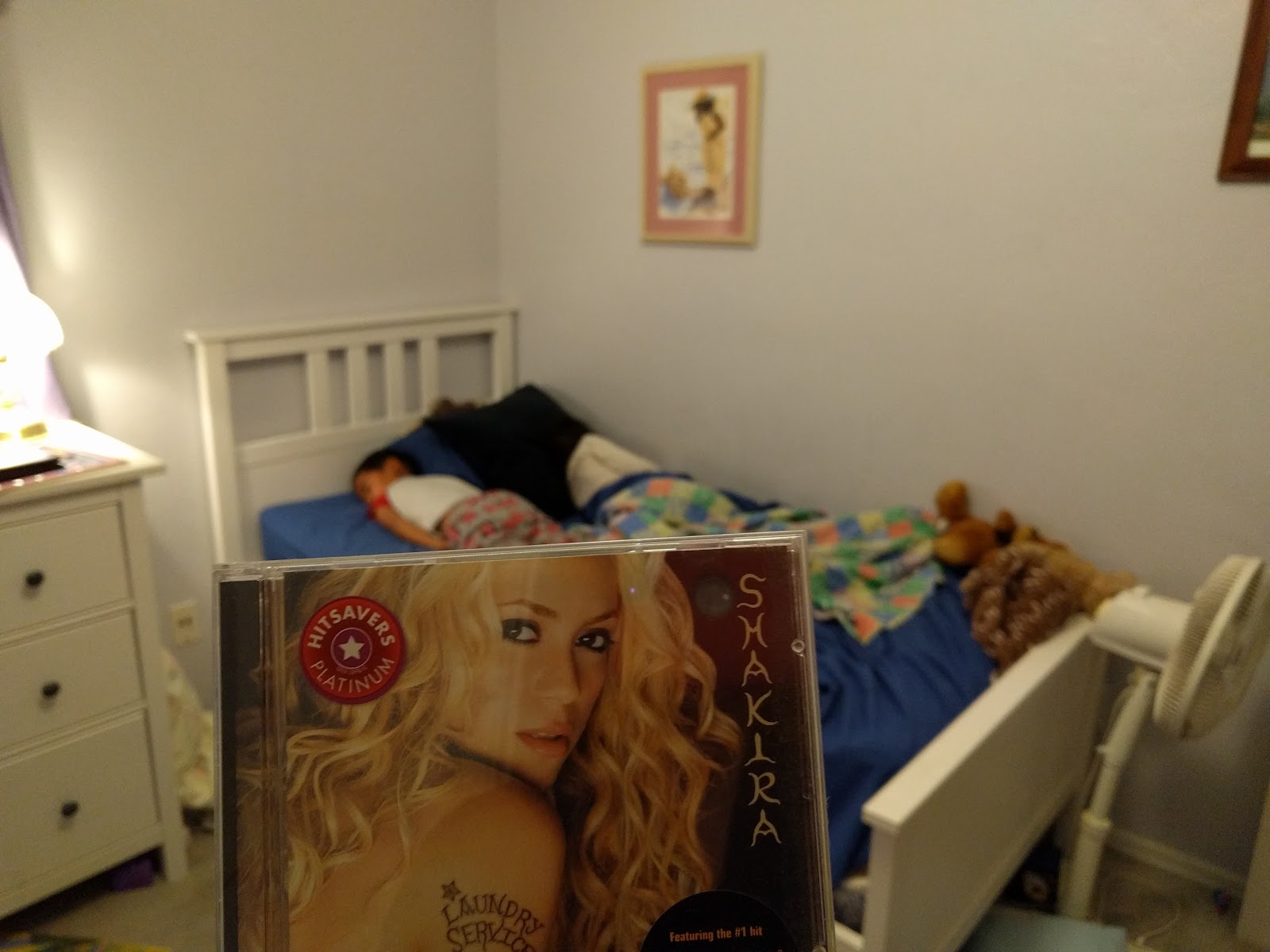 Sometimes, you just need some Shakira in the mornings!

How do you handle behavior challenges in your house?  What about snack times and morning wake-ups?  Have you found anything that really works?