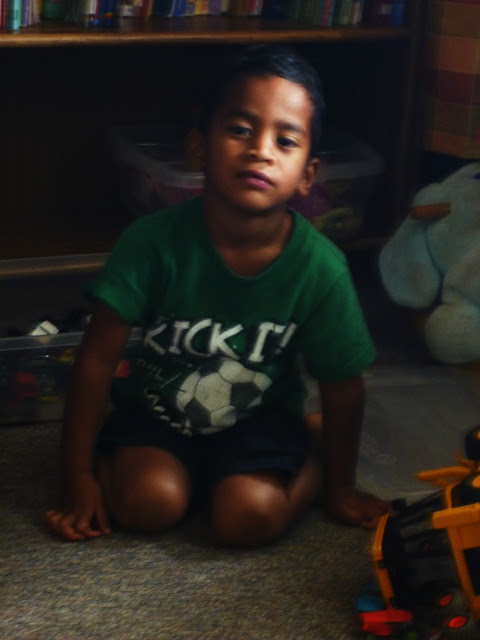 Fire is struggling a little bit right now.  Part of it is just being three and the growth and change that happens at that age and a bigger part is sadness and fear.  The last few months have been full of ups and downs and he's having a hard time coping with all of it.  First, he and D went to Hawaii for his surgery, then Sky started Kindergarten (he'd never been at the preschool without her), and D left on a plane without him and was gone for three weeks.  As soon as D got back, Earth joined our family and we started talking about a move to America.

That's a lot for such a little boy to deal with.  Especially a little boy who doesn't always speak up and still has a hard time making himself understood when .  Fire has a lot of feelings in his little heart right now and because he's three, a boy, and verbally delayed, they're all coming out as anger.  Not just a little anger, a whole lot of punch-scream-kick-call names anger.
As I type this, I find myself thinking that if I were reading that introduction, I would expect the rest of the post to be about how we're rising to the challenge of helping him process his feelings and move forward, since we have so much experience dealing with difficult behaviors after working through them with Sky.
Unfortunately, that's not what's happening.  Fire is his own person and many of the tactics we used to help Sky through things don't work with him.  When I try to talk calmly to him, he screams over me.  I've tried whispering my words to force him to be quiet and hear me but he's just not interested in listening.   I've tried letting him act out against me physically in good ways (like pushing against me and giving me squeezing hugs) but those actions don't have the same emotional release that hitting and kicking do so he doesn't want to do them.  We've tried time-outs, we've tried hugging and tickling (positive physical reinforcement), we've tried making jokes out of his angry words and none of it is working.
I know from experience that eventually this will pass.  Eventually, we'll find the key to soothing Fire's poor heart and eventually we'll be able to fill it up with love again.  In the meantime, we're casting a wider net for ideas and trying to carve out some more time to spend just with him.

Have you been through this with your kids?  What worked for you?