Driving Ahead of the Snow

D called me from town and said there was a big snow storm coming up north and that it might be a good idea to pack and leave this afternoon.  His folks live in the country and he and his dad had taken the kids into town to a playgroup.  D said he would look into renting a larger vehicle for us, since we were borrowing his step-mom's Versa, and I got right to work packing us up to go.
It was actually way easier than I thought it would be and I had everything ready to go by the time they got back to the house.  D's dad had rented us a Jeep Grand Cherokee- not 4-wheel drive like D wanted but better than the Versa.  We had lunch together and then packed up the car and were on the road by two.
This was our first big drive and it went pretty well, considering that the kids had never been in carseats for this long before.  Sky is big enough that she can see quite a bit from her seat, so she does okay but Fire can't stand to be in his for very long.  He did well enough until we hit the snow-slush south of Omaha.  Then, of course just when D had to concentrate on driving, he started crying and getting really mad.  I ended up climbing into the backseat and sitting between the kids to try and keep him occupied.  It only worked so well but we did finally make it to our hotel.
We're doing several long (4 hour) drives this trip and we were a little anxious about how they would go.  Our kids just aren't used to sitting still for long periods of time and we didn't really have a way to prep them for it.  We were all ready for the drive to be over by the time we got to the hotel but I think we'll be able to do this a few more times. 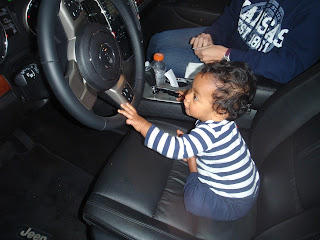 Fire says, "Buckle up Mom, I got this!"
Labels: Family US