On Wednesday the Ebeye branch of Waan Aelon in Majel (say: wahn eye-luhng en mar-jjel) held it's first graduation ceremony.  I have been teaching English to the class once a week since the program started in June so I was very excited to these young men graduate.  The purpose of WAM is to teach young men here in the Marshall Islands to build, sail, and navigate traditional Marshallese outrigger canoes and use that training as springboard to teach them other job and life skills.
While things were a little shaky for this first group-they had some trouble getting supplies when they needed them and there wasn't always a clear direction forward other than working on the canoes- the problems they encountered weren't showstoppers.  They completed two beautiful outrigger canoes and now have a new confidence in their abilities and futures.  One young man has already gotten a job on Kwaj and many others have goals to work towards (like getting a GED) and the tools to really pursue them.
I was so proud of the graduates that I was almost bursting.  The ceremony was like most other graduations in that there were speeches by dignitaries, encouraging them to try their hardest in the future (and convincing me that I have to study my Marshallese more, because I understood about every 15th word and almost none of the context), and then a presentation of diplomas.  I was really surprised when they called my name to help hand out some of them- what an honor to be able to shake their hands and say "Jerramon" (congratulations)!
After they received their diplomas, the group put on a short program.  Paula, another English teacher, had used books and songs to build their vocabulary and to encourage their contextual understanding and the guys had picked one of the songs, memorized all the words and made up with a dance.  It was really neat to see them performing something I knew they'd been working hard on.  You'll never guess the song that they chose to perform, so I'll just tell you: Chains of Love by Erasure.  ESL teachers in the Marshall Islands, if you haven't tried teaching your students with EuroPop, we highly recommend that you give it a try!
After performing the song and dance with Paula, the graduates sang a song about the WAM program that they'd written themselves.  It was beautiful and I wish I had a video of it but of course, my camera ran out of batteries just then.  After the song they called up all the English teachers (myself, Gina, Paula and Kathy) and presented us with shell necklaces and handicrafts to thank us for teaching them.  In return, we presented each graduate with a candy necklace that Paula made for them.  Then the valedictorian gave a speech and the WAM director gave a speech and there was a closing prayer by the pastor. 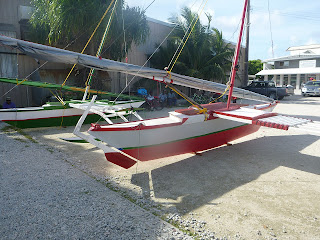 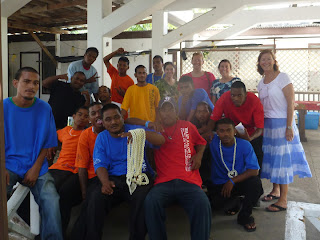 The volunteer teachers and the proud graduates 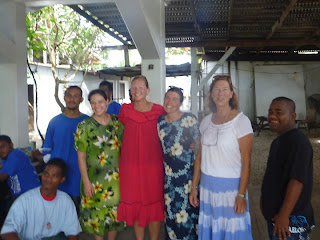 Another shot of the teachers: Gina, me, Paula, and Kathy 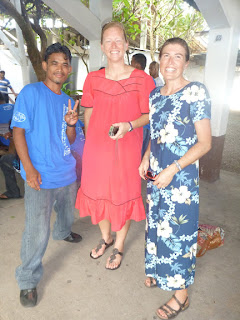 Paula and I, showing off our Marshallese dresses (called muumuus) and getting photobombed by J. 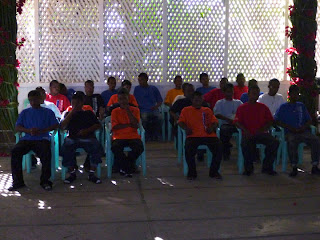 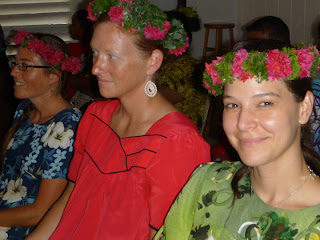 We were presented with wuts (say: woot) by the students before the ceremony started 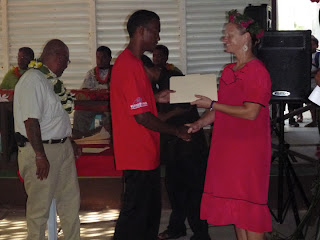 Me presenting a diploma to R.  I was smiling so hard- I don't know that I've ever been prouder in my life than I was that day.

Paula and the graduates dancing to Chains Of Love: 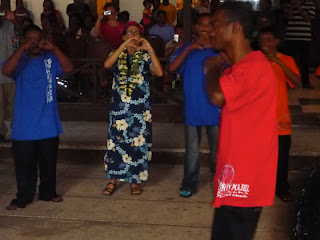 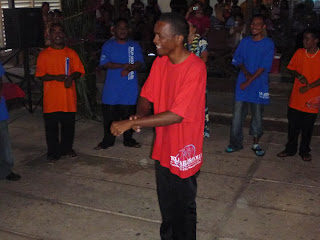 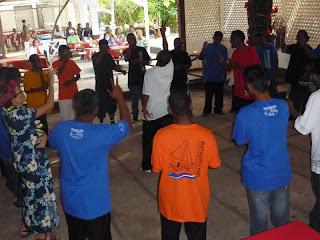 Gina and I already talking about what we want to do the same and what we want to change for our next teaching season.  It sounds like the next group of young men will start in February so we'll have a bit of a break, and we're both looking forward to that, but we're also both charged up to start again.
Labels: A Teaching
Location: Kwajalein Atoll, RMI