Before D and I brought Sky home, we talked about trying cloth diapers but decided to stick with disposable because Sky was older and they were what she was used to.  We have always used Pampers and haven't had any complaints about them.  I know a lot of people choose to go with cloth diapers because they don't want to contribute all those diapers to a landfill but since all our trash is burned, that wasn't a factor for us.
Since we were in the habit of using Pampers, we just ordered smaller ones for Fire and used them on him when he came home to us.  Again, we, and Florina, were happy with them.  So why the change, you might ask?  As usual, the main factor was cost.  Fire goes through a lot more diapers than Sky did and I was spending $50 every two weeks to keep enough on hand for him.  Also, since there has been talk of the CDC starting infant care (and hopefully hiring Florina to work there- we wouldn't send him if they didn't bring her on board), we needed to look at other options.  One of the things we found out when Sky started at the CDC is that they do a diaper check every hour and if a child is even a little bit wet, they have to change the diaper.  With a baby like Fire, that could mean 8-10 diapers a day, and those boxes of 112 diapers would only last for about 10 days.  And that's not counting what we need at home.
In light of that, I decided to give cloth diapers a try.  D's aunt makes her own cloth diapers (Dove Diaperz, email me for info) so we gave those a try first.  They were the snap-front, pad-stuffing kind.  We really liked them but because Fire is a gigantor, they didn't fit him very well and we had some problems with leaks (in retrospect, probably user error.)  We passed the diapers on to a friend our with a younger baby and she hasn't had any problems with them.
The second kind we tried were gDiapers and we've stuck with them.  I like that they have a rubber-like liner in them, meaning that there are fewer leaks onto clothes and that they are less bulky than most cloth diapers seem to be.  Florina likes them well enough to keep using them and Fire doesn't mind them.  We're still using Pampers at night (Fore's already in size 4 for night time!) but the rest of the time, he's in gDiapers with the gCloth insert.
The upside: I haven't bought a box of diapers in four weeks.  The downside: I have to remember to do laundry every night.  I think I can handle that. 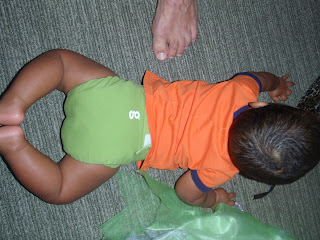 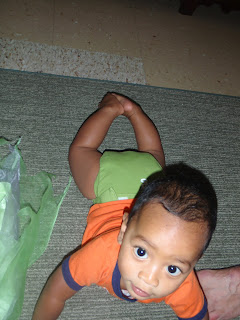 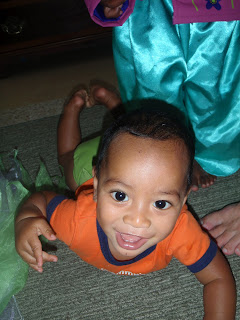