We leave for our trip to the US in two months and boy, are we ready to go.  Imagine not being able to leave your town.  You can go in a straight line for one mile either north or south from your house or about 300 yards east or west.  That's it.  For almost a year, with the exception of our trip to Majuro to bring Fire home, that's what we've been limited to.  And yes, we did go to Majuro.  But anyone out there who's adopted kids somewhere away from their home will tell you that the trip to get them isn't a vacation.
So we're heading to the states, our first time back since we brought Sky home in May of 2011.   I found a great deal back in August, so we already have our plane tickets.  We'll be spending a few days in Honolulu playing tourist, since we've never had a chance to do that, and then we'll be in the midwest for 4 weeks over Christmas and New Years.  On the way back, we're stopping in Majuro for four days to visit the kid's birth families.  We're hoping to see as much of our family as we can and to have a good time while we're at it.
I'm already thinking about what I'm going to ship ahead of us-  we don't really need cold weather clothes here, I'm going to mail most of our clothes home so that we don't have to take them as luggage on the airplane.  Poor Sky- she hates wearing pants!  She's going to be crushed when she realizes that she has to wear them every day.  Luckily, she has a wonderful fairy godmother who bought her some winter dresses that she's already in love with.  Sky tried on one of the coats we'll be sending ahead for her to wear: 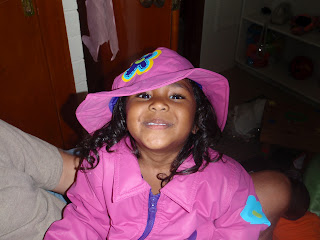 Since it's pink with flowers, it got approved. 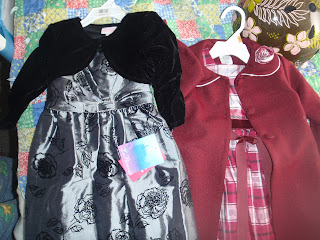 This is Sky's Christmas dress and another winter dress I bought on Zulily for her.  She begs to wear them but I'm making her wait (such a mean mommy!)

We're starting to book our hotels (a waterpark resort and a cabin in the Wisconsin woods are already booked)  and to plan our drives.  Because it's been over a year since Sky was in a car seat﻿ (and didn't really love it that much when she was) and Fire has never been in one, we're not really looking forward to that part of the trip.  We're trying to make most of our long drives less than four hours long and we're going to do them during a nap time or at night so the kids can sleep.  We'll have the iTouch for movies but I think we're probably going to have a lot of this on our drives: 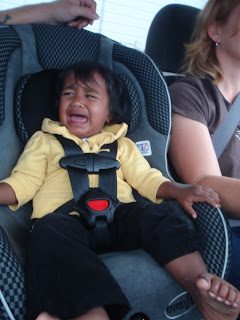 We've got doctor's appointments made and we're getting in touch with friends we want to see.  We're hoping that Fire can be dedicated at D's grandmother's church like Sky was.  We're making lots of plans but trying to make as few as possible.  Brace yourself, US, we're coming!﻿
Labels: Family Kwaj US