We played our last soccer game of the season last night.  It was a tough one, against the varsity girls high school team.  They are very good and they beat us 4-2.  They have a front line of three girls that have been playing together since they started playing soccer and when they get ahold of the ball, you just have to get ready to be scored on.  They're just that good.
I played goalie this season and in one of the quieter moments of the game, it occurred to me that being a parent is a lot like playing goalie in soccer.  There are a lot of people involved, but when it comes down to it, you have to face the challenge yourself.  There are people who can help, who can make sure that you're not under pressure all the time but there will be a lot of times when it's one-on-one and those times are hard.  Sometimes you can make the save and get the ball back on the field and keep the game moving, and then you can feel really good about yourself.  And sometimes you can't.  Sometimes your head wasn't in it, you weren't paying attention, maybe there was just too much coming at you at once, or maybe the shot was just to hard for you to stop.  And then you feel bad about what you didn't do, what you should have done, and you can get down on yourself.
But the game keeps going and there will always be another opportunity to make the save, to do it better.

But back to soccer: most of my games started later in the evening but D was able to make it to one last week and took a few pictures for me.  That's me, in the goal box: 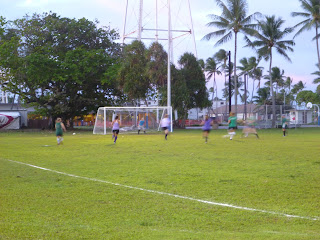 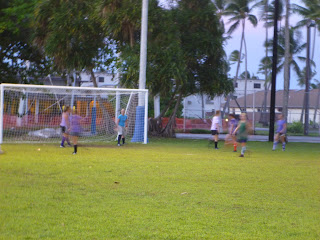 And then a certian little someone who loves cameras got ahold of it and started taking pictures: 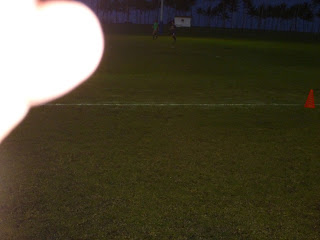 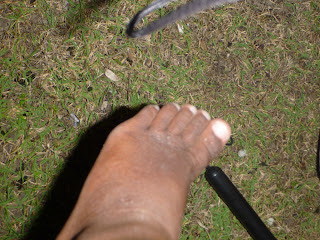 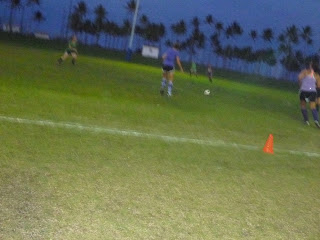 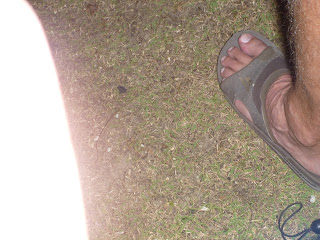 I really like these pictures.  In the first one, I'm pretending to catch Sky up in the air (I made a few good saves that way during this game) 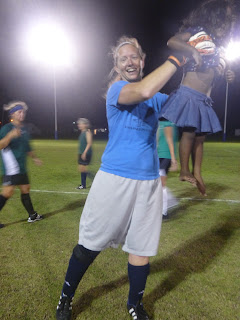 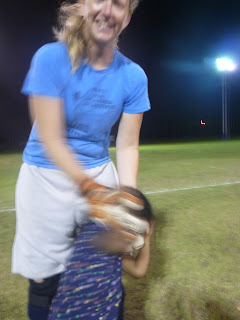 And in this one, Sky is holding my gloved hands to her face so that we can play "shake-face".  Love that girl.﻿
Labels: A Family Kwaj