After a night and day in Bangkok, we headed back to the airport for a quick flight up to Chiang Mai.  We'd always heard wonderful things about the city in the northern, mountainous area of Thailand but had never been there ourselves.  The kids' godparents were getting married at a small, family-run resort outside of town and we were able to get a great deal on a bungalow there.  Normally we like to stay closer to activities and restaurants but the chance to be close to our friends and have a whole house for the kids won out.
The grounds were park-like and the kids had a really good time exploring them.  It was great to be able to let them have some freedom to roam and explore. 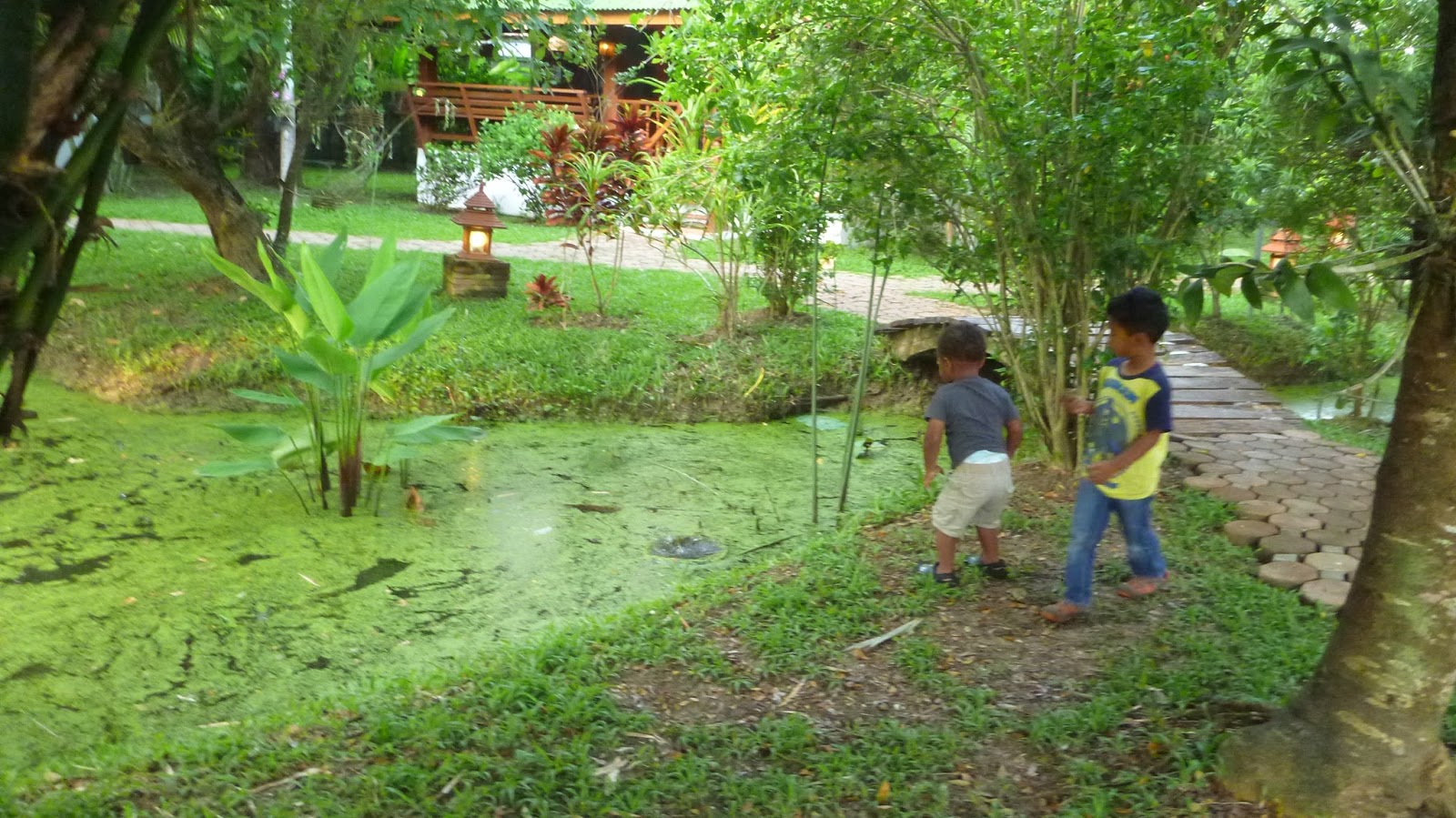 Throwing rocks in this pond was a big hit 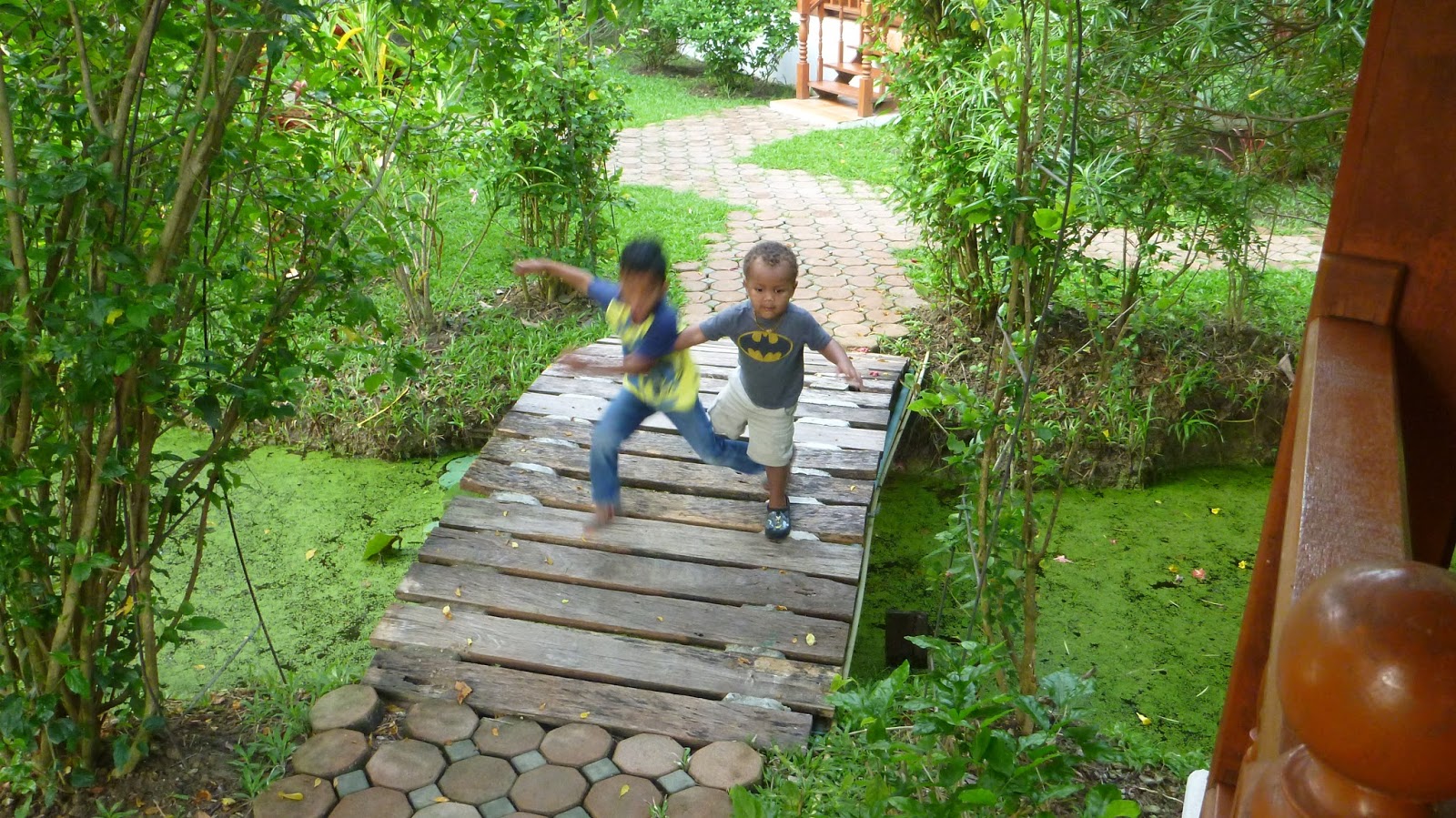 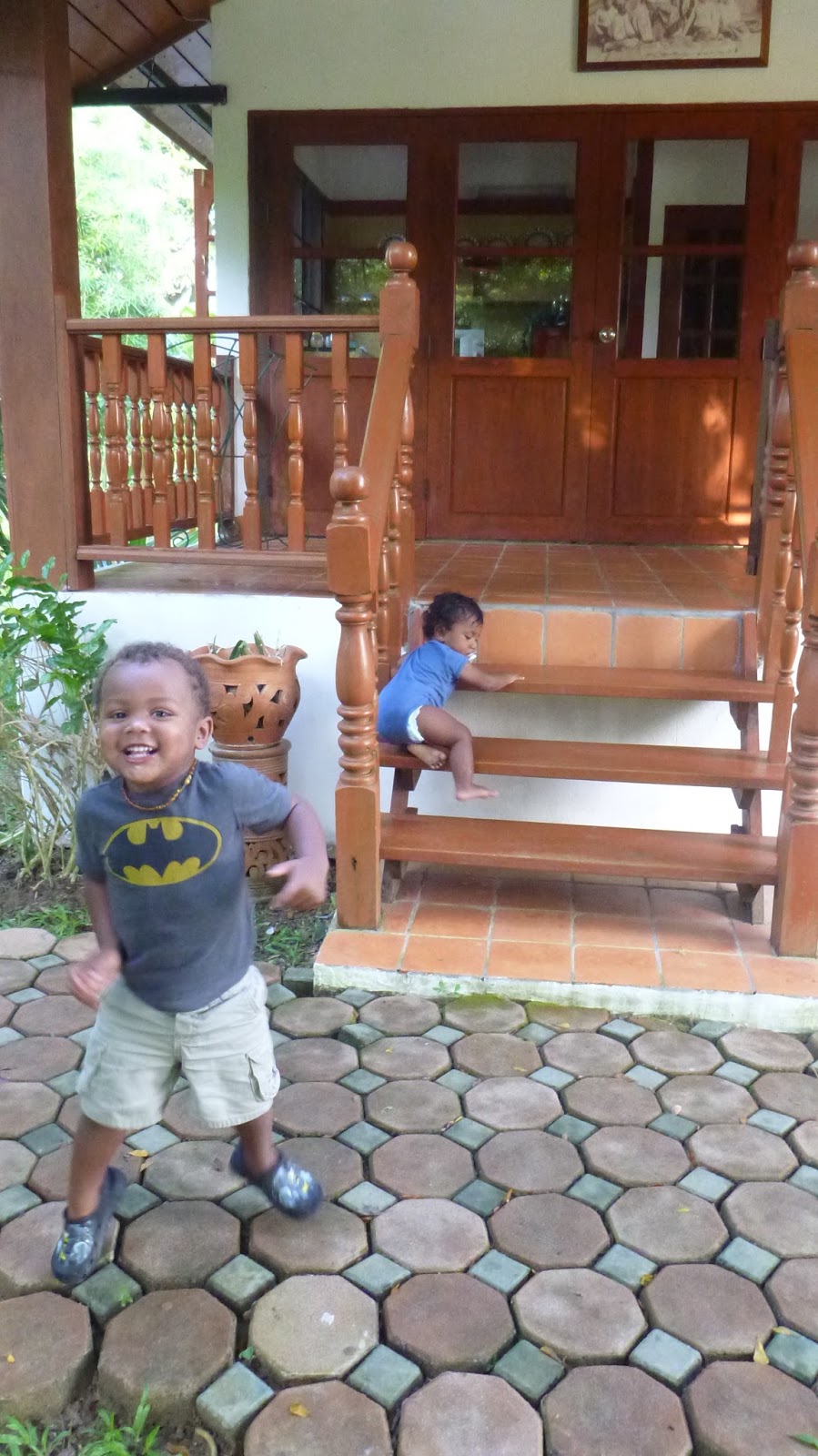 See Earth climbing the stairs?  That was his favorite thing to do.  He would go down backwards, sit at the bottom and clap for himself, and then climb back up.  We ended up having to block the gate to the stairs with the stroller because he'd find his way out there when we weren't on the porch and there wasn't anyone to watch him. 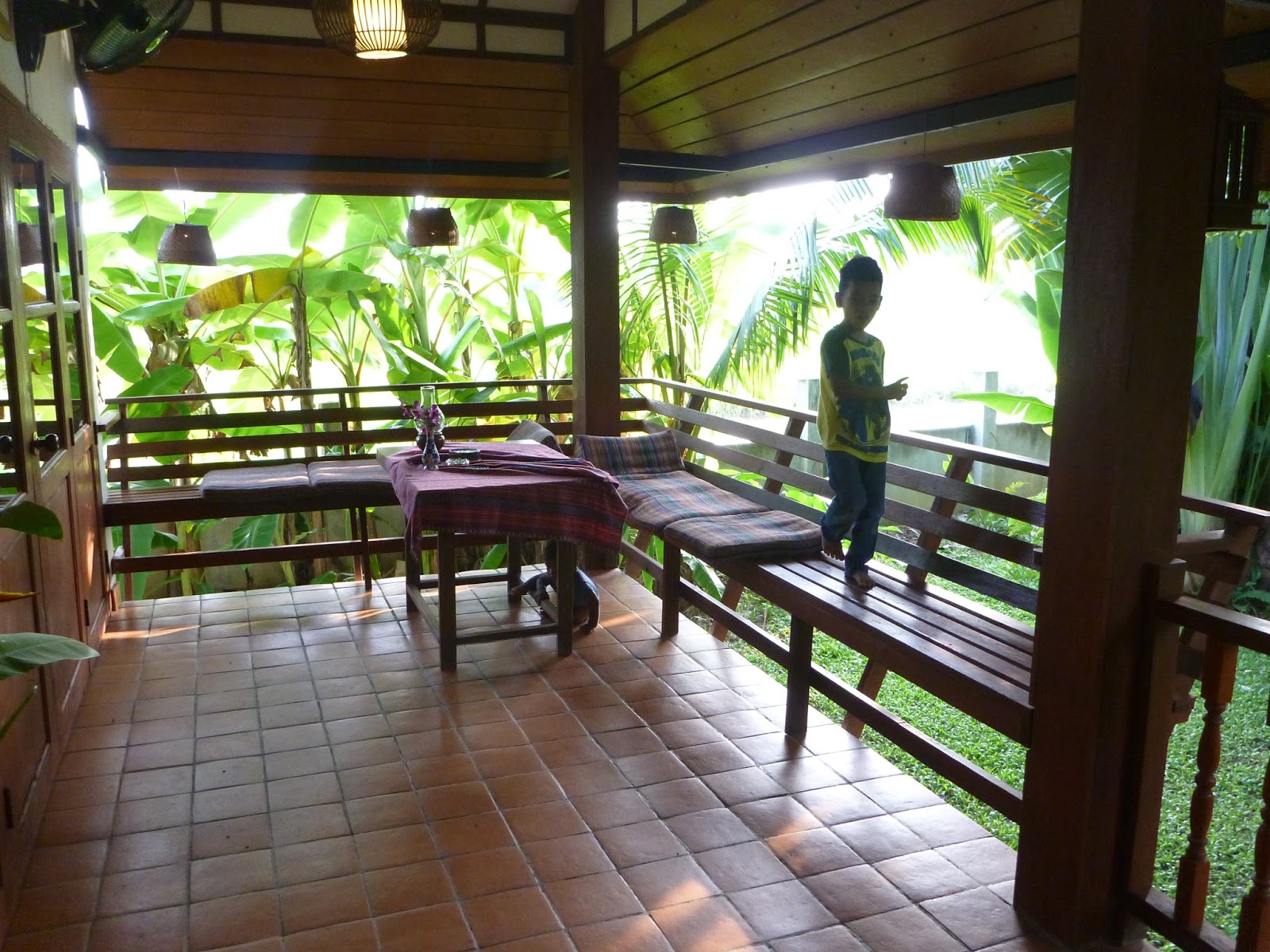 This is the porch on our bungalow.  There is a wall of doors on the left that go to the kitchen/living area and we would open all of them up and spend most of our time at home in this space. 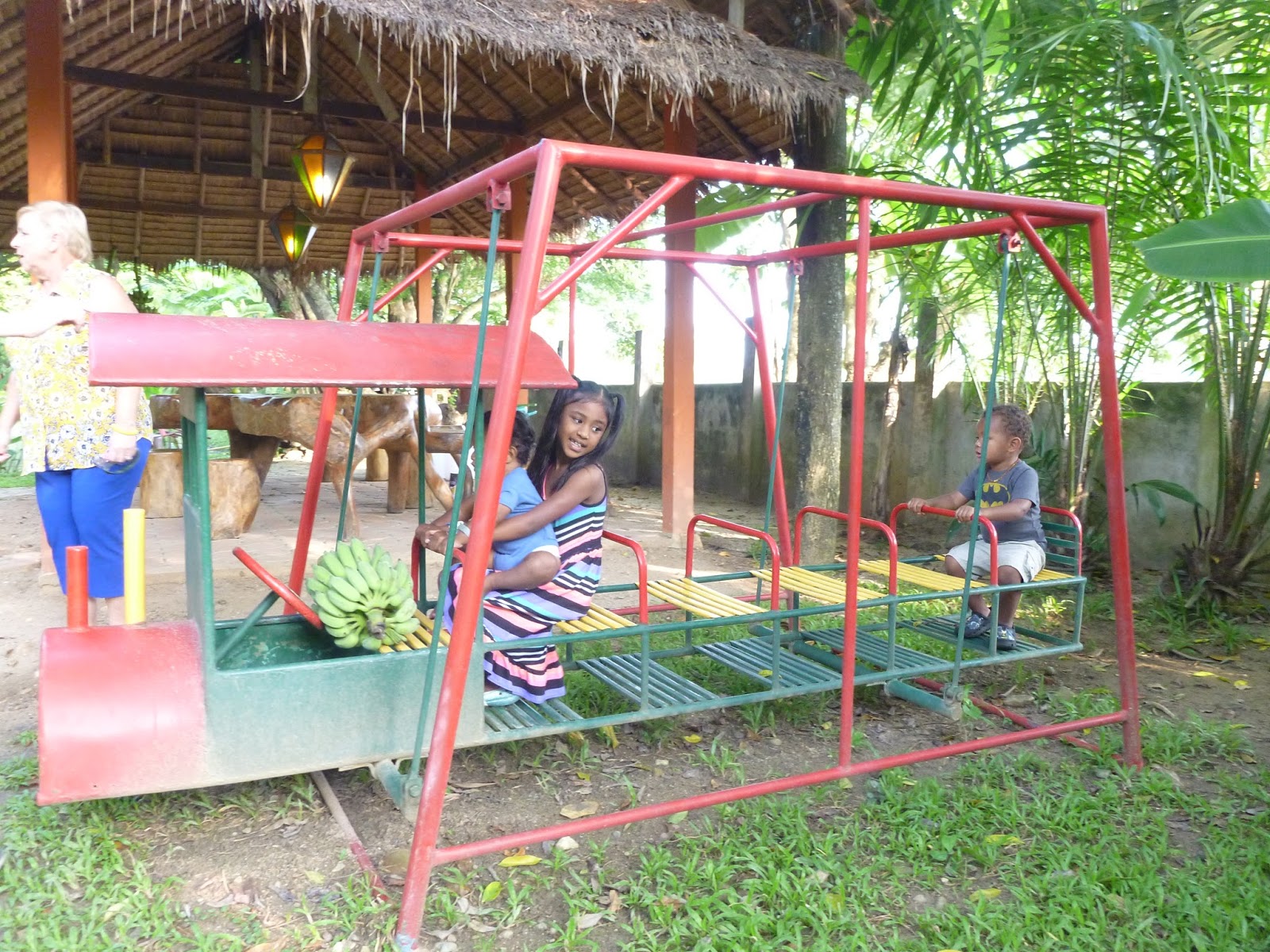 The resort had a little playground with this rocking train and swings and we stopped to play every day on the way to breakfast and home from dinner, 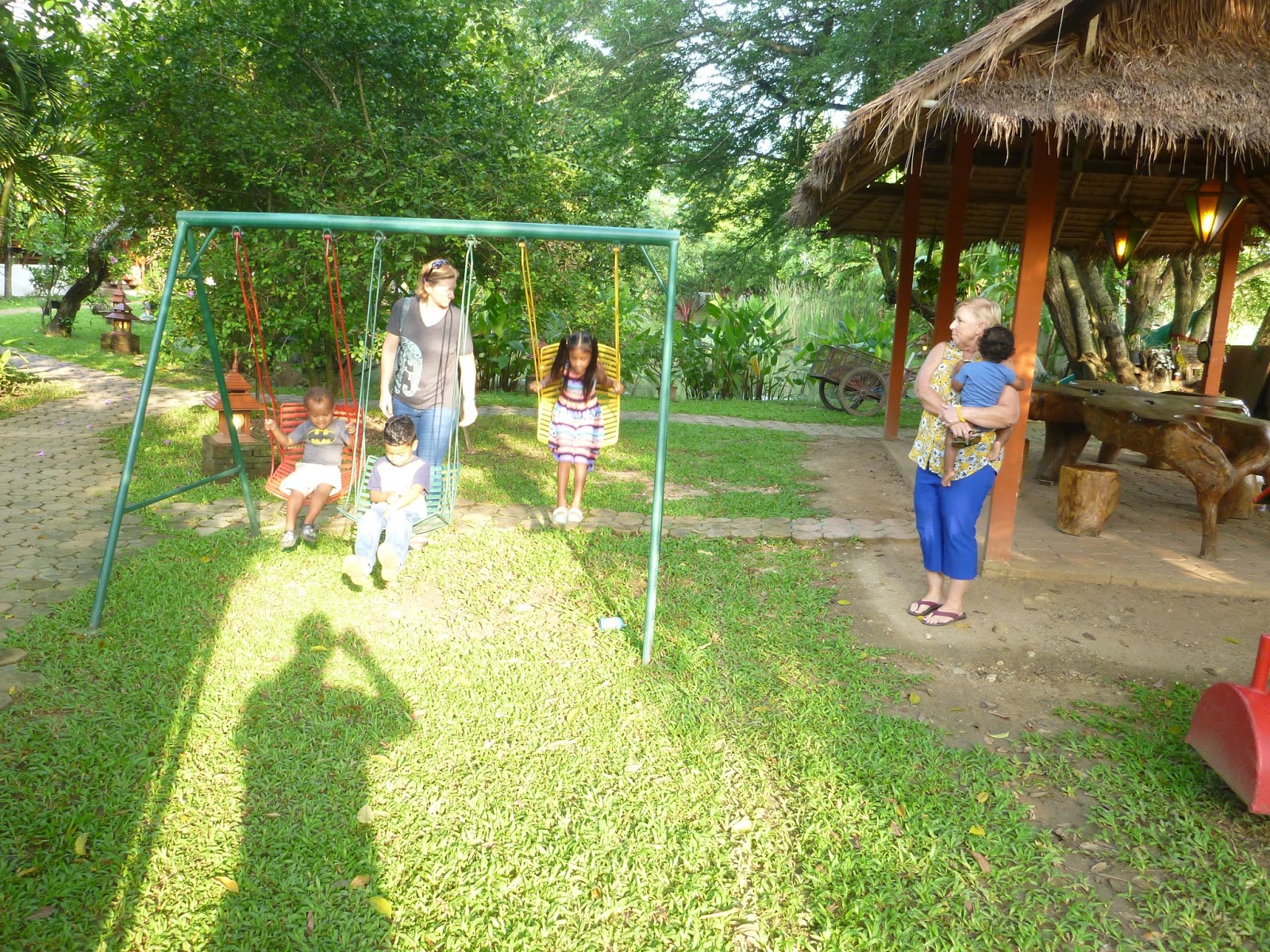 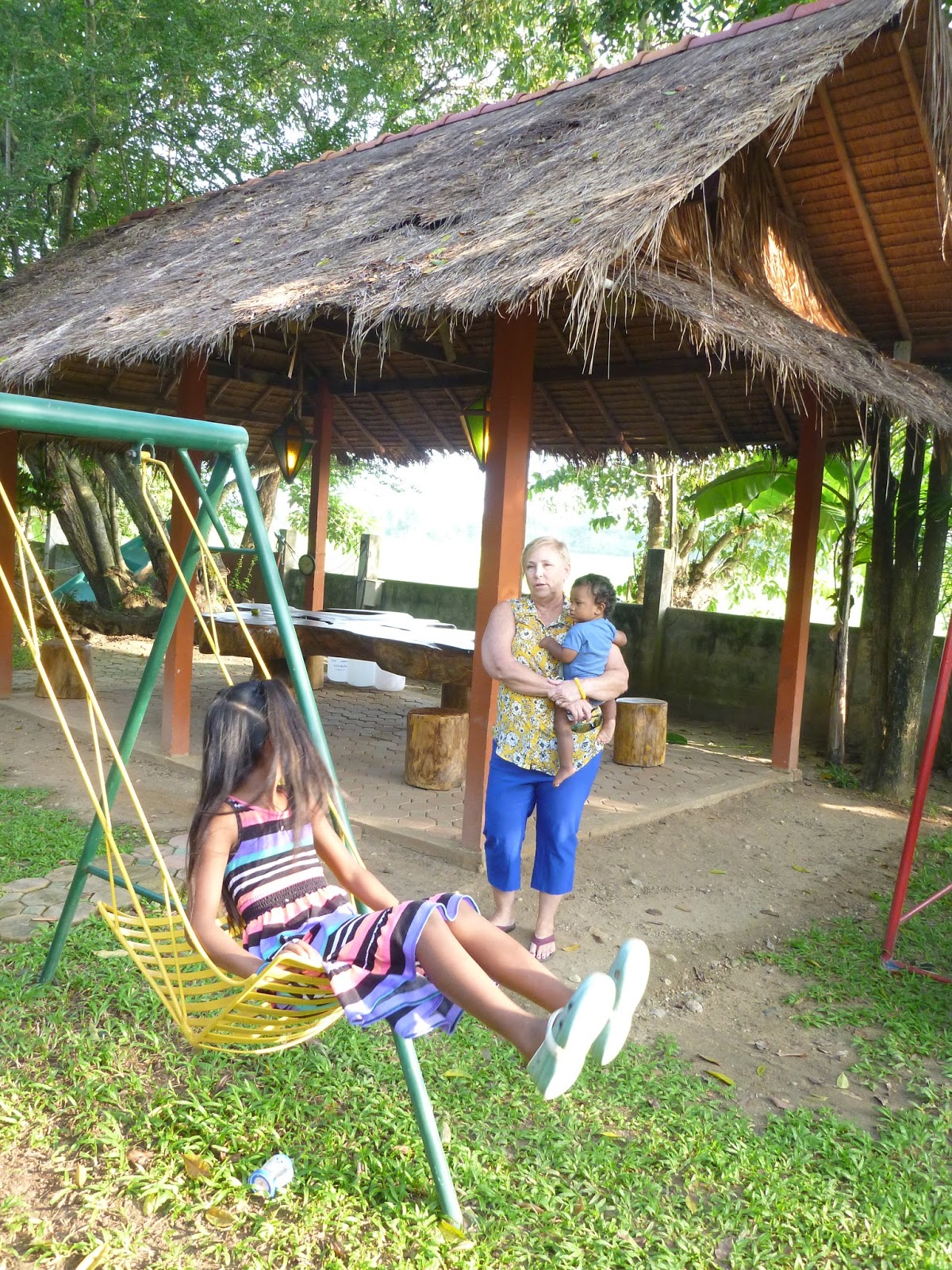 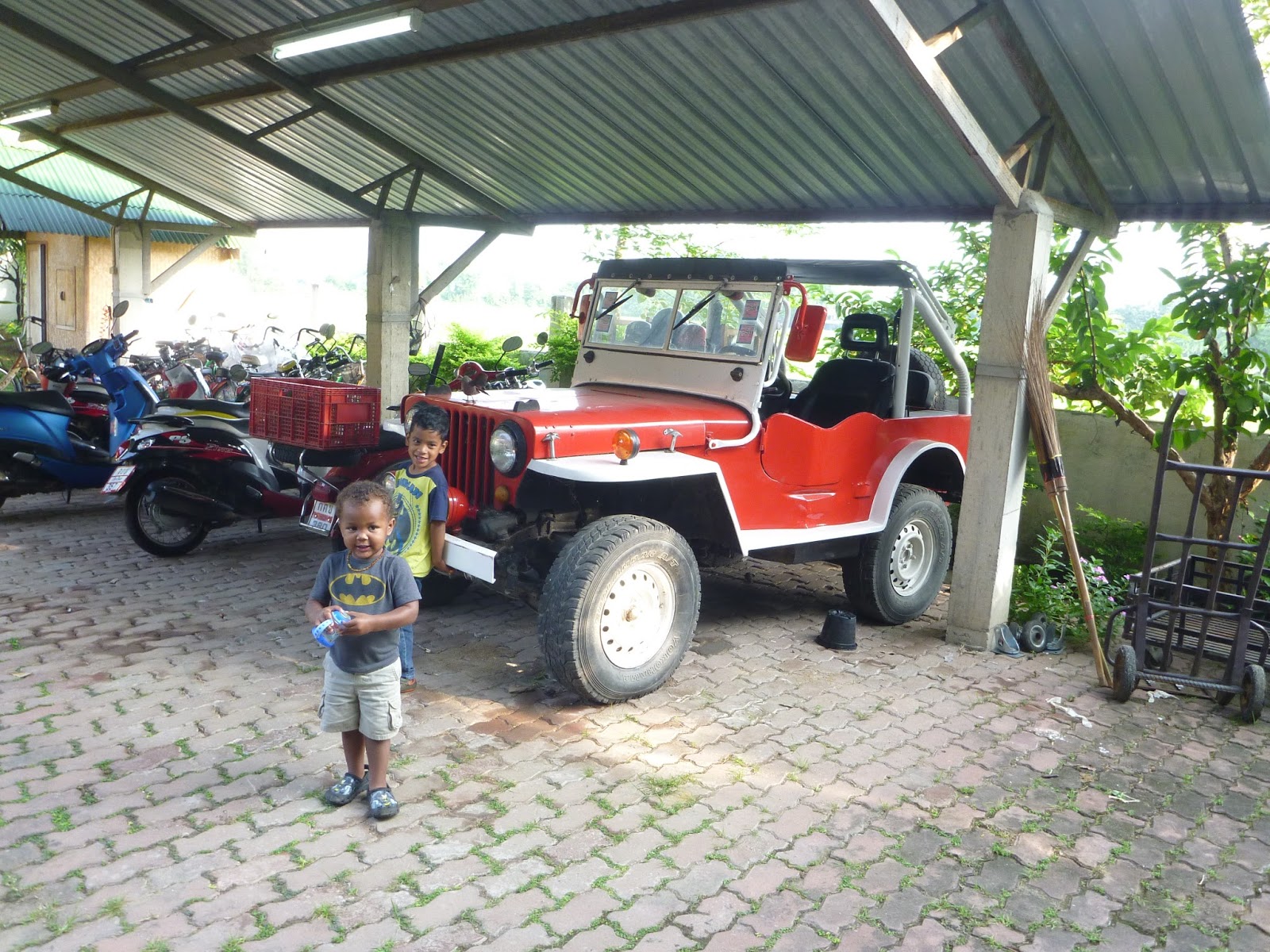 The parking lot was a hit with the boys.  Jeeps!  Motorcycles!

I got to spend a day at the spa with the other women who were there for the wedding and D watched the kids for the day.  They hit the pool 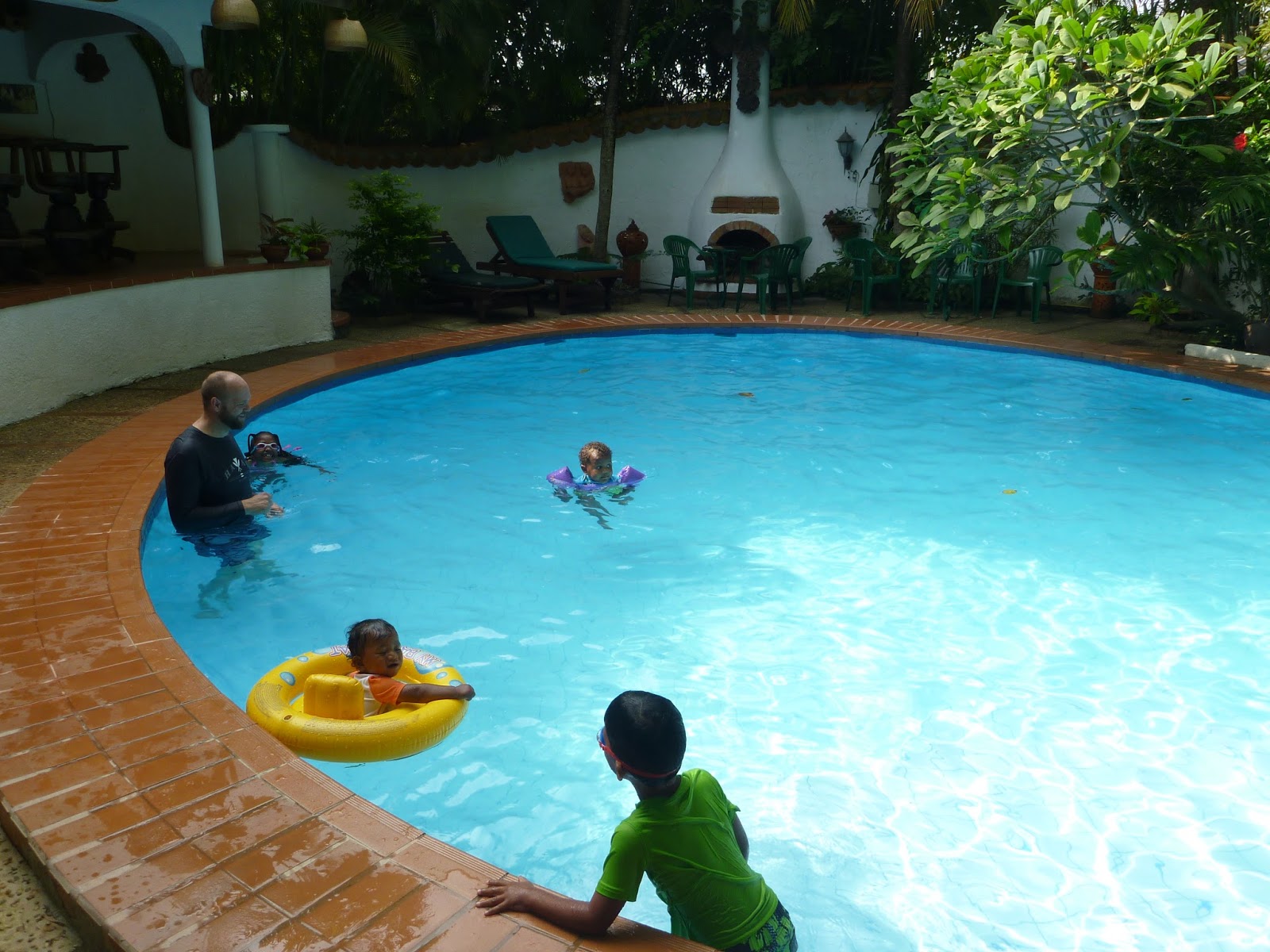 and then headed to town to pick up a few essentials.  D loves interesting vehicles and has a tradition of taking his picture in front of them.  This time, the kids got to be part of it: 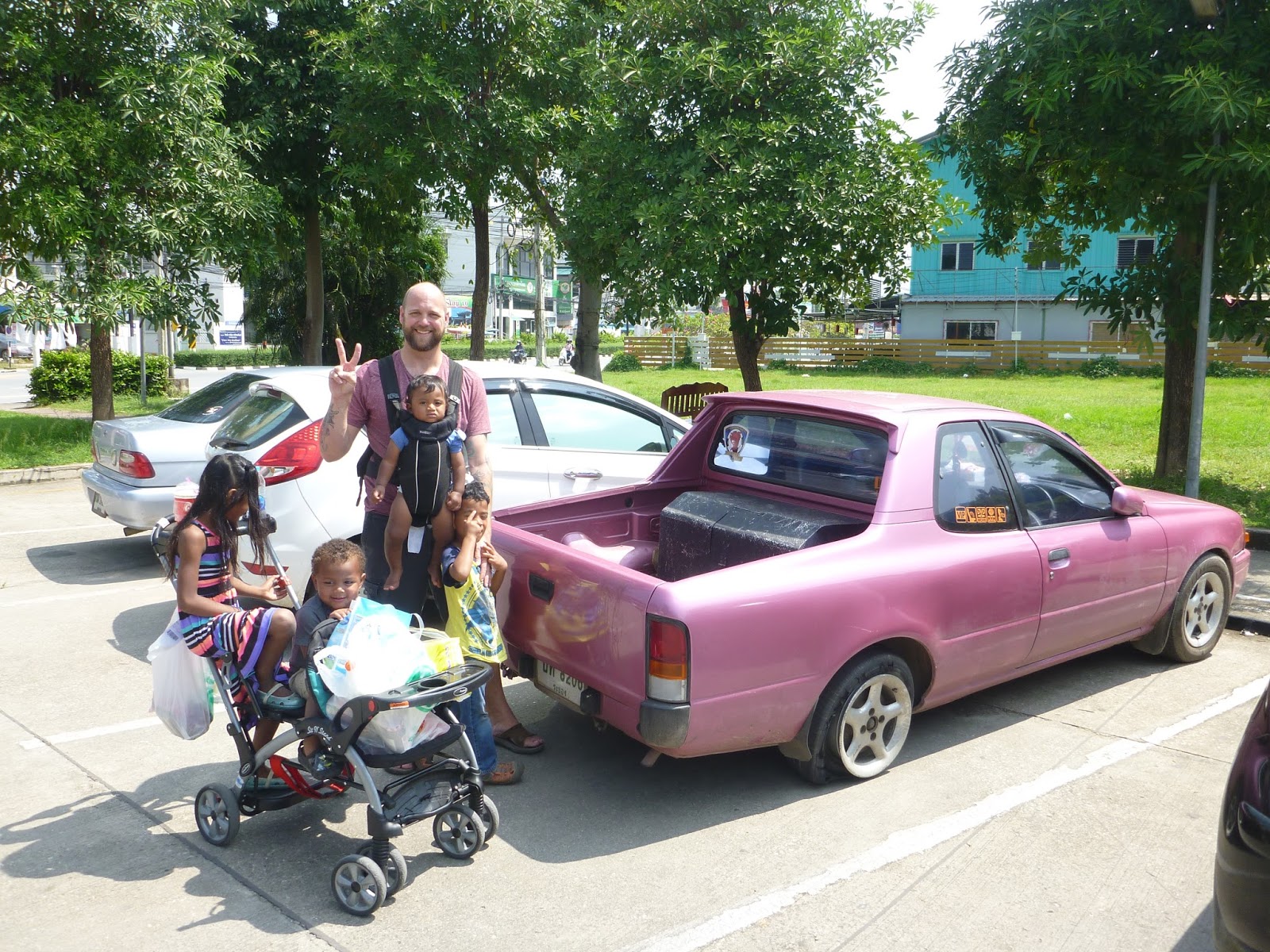 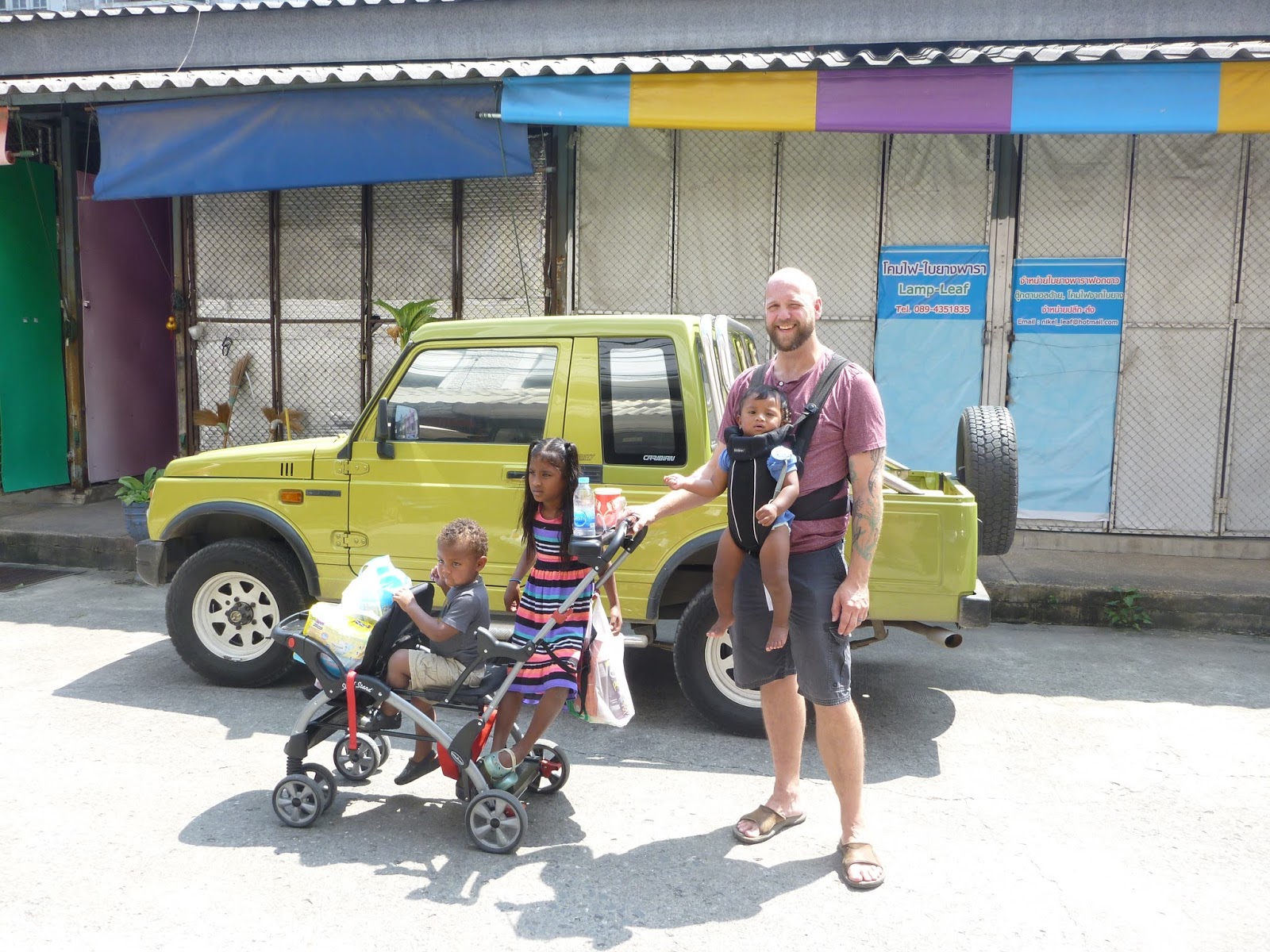 Between a big day out with D and jet-lag, these two couldn't stay up through dinner 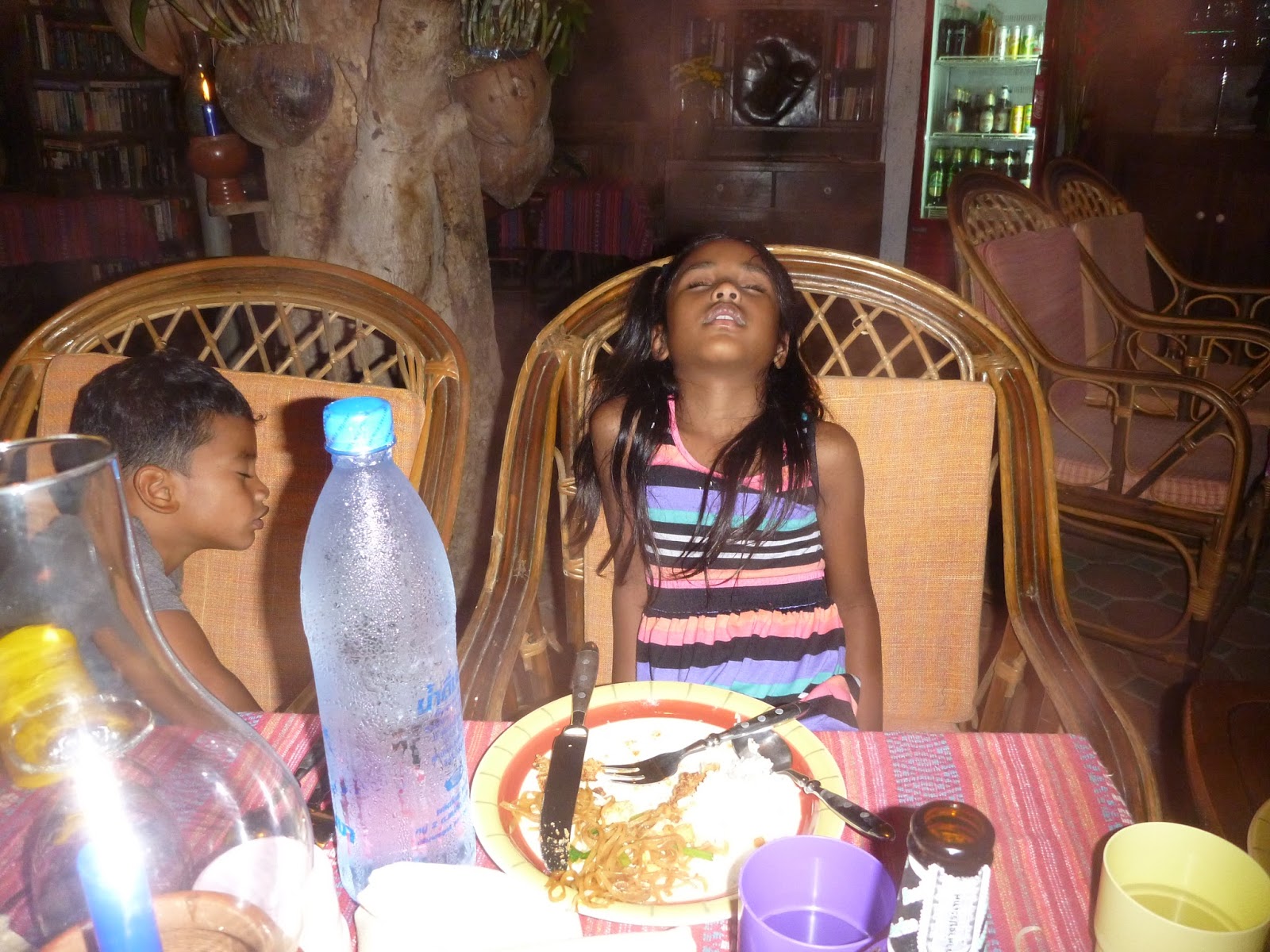 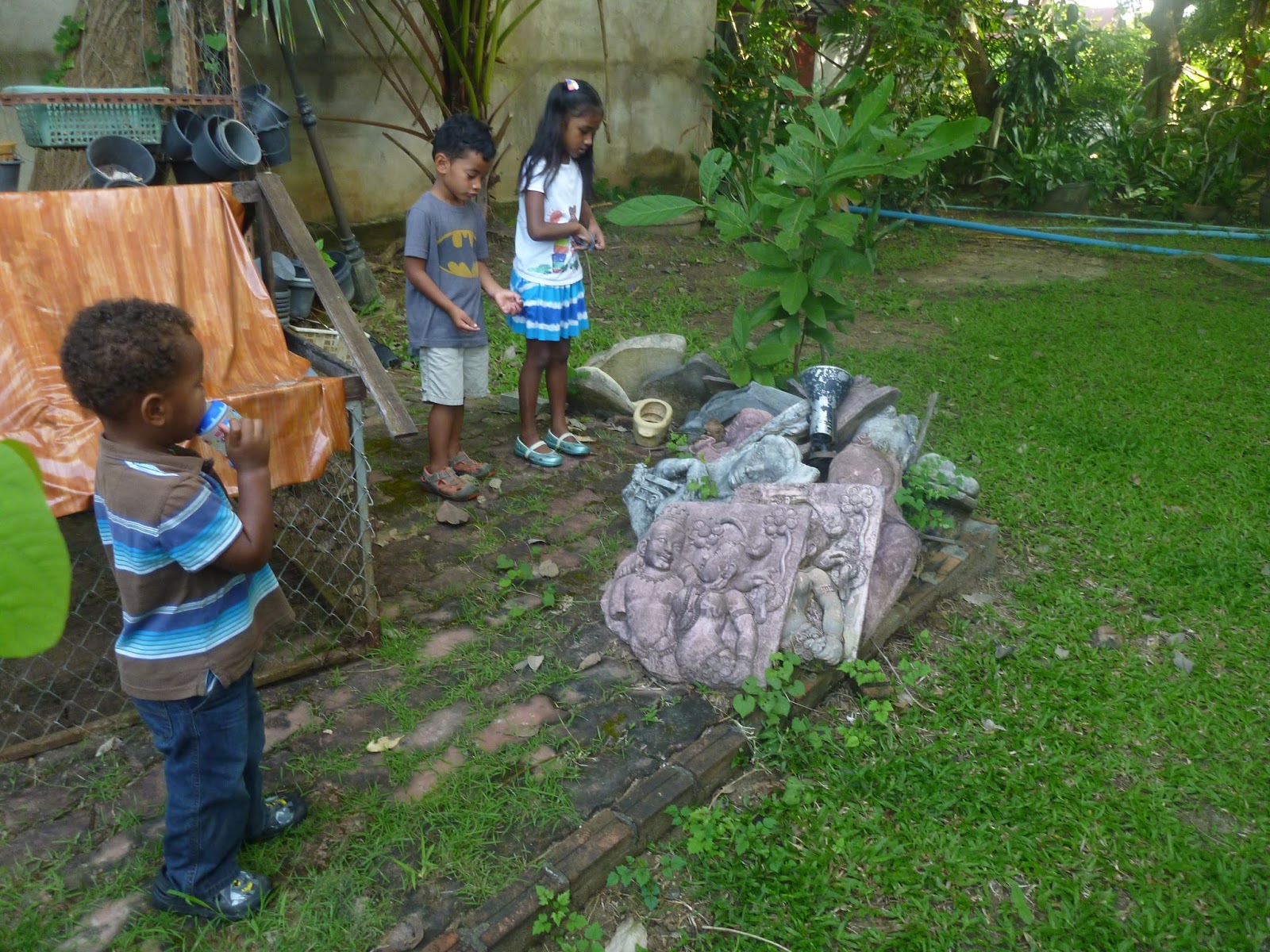 Playing with the tadpoles they found in a fountain 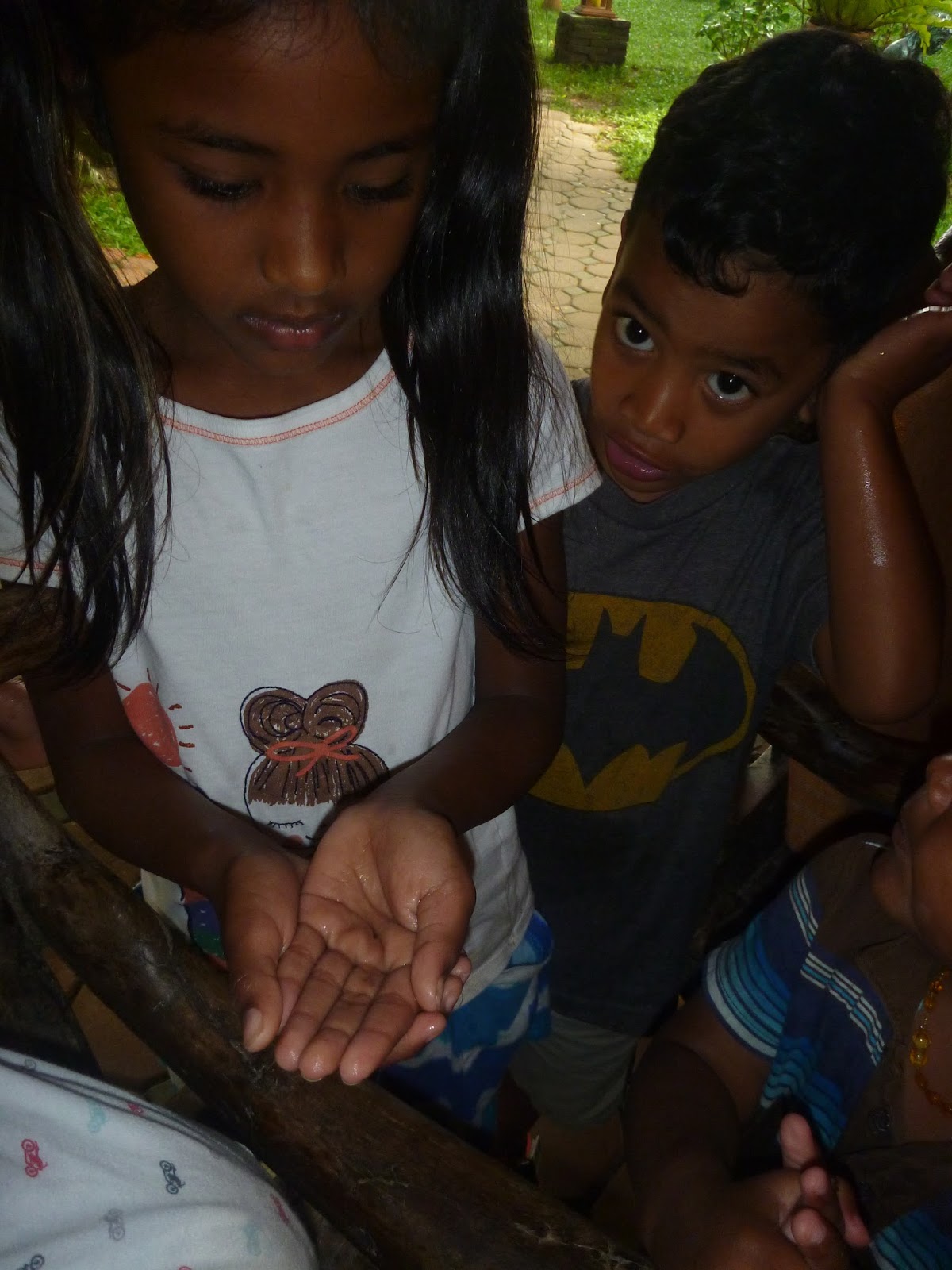 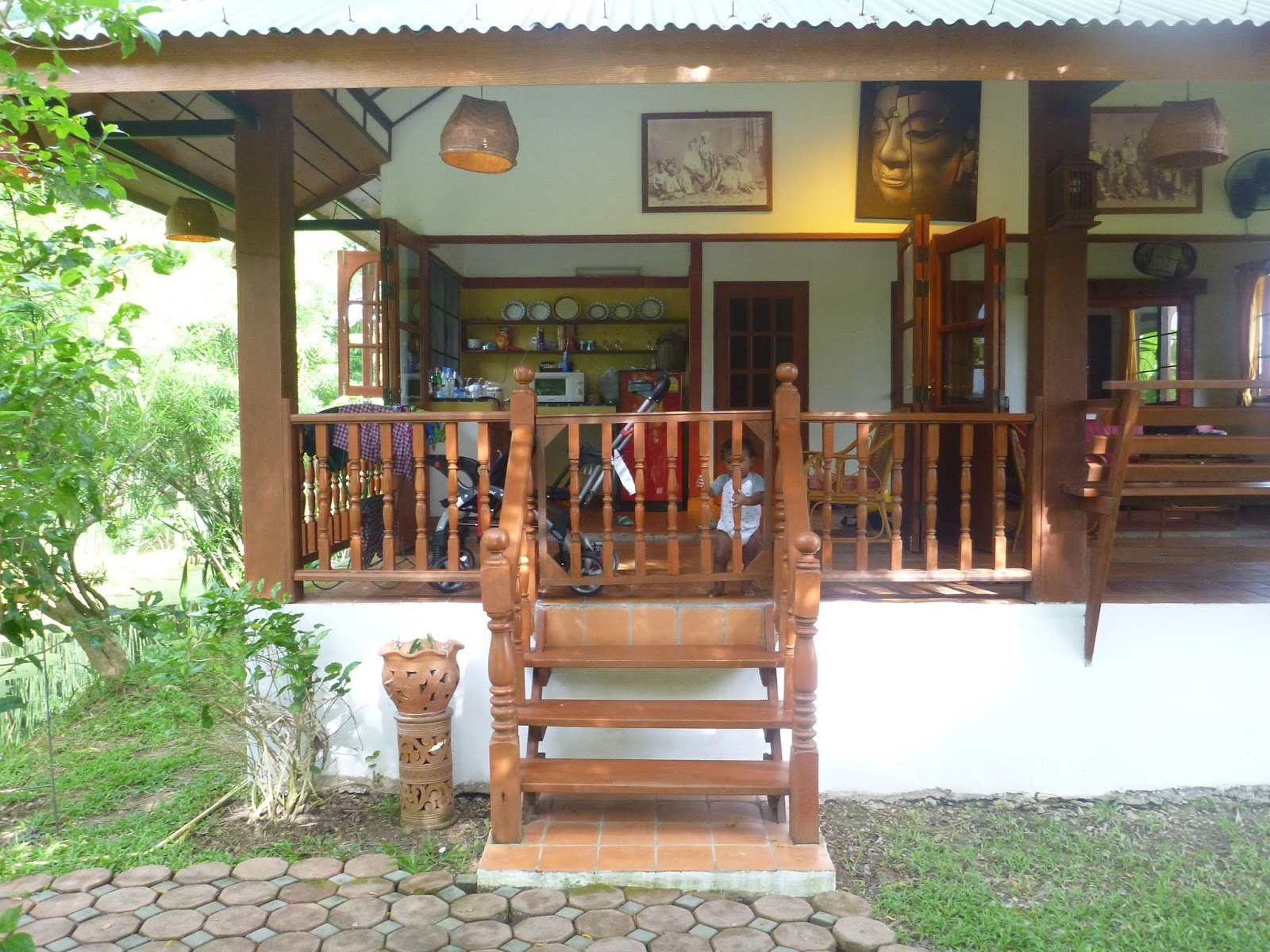 On our second day in Chiang Mai, we headed into town with M and P, the kids' godparents, to have a look around.  Our first stop was the umbrella factory.  The village we were staying in, Bo Sang, is known for it's traditional umbrella making and we got to walk around and watch the craftspeople at work 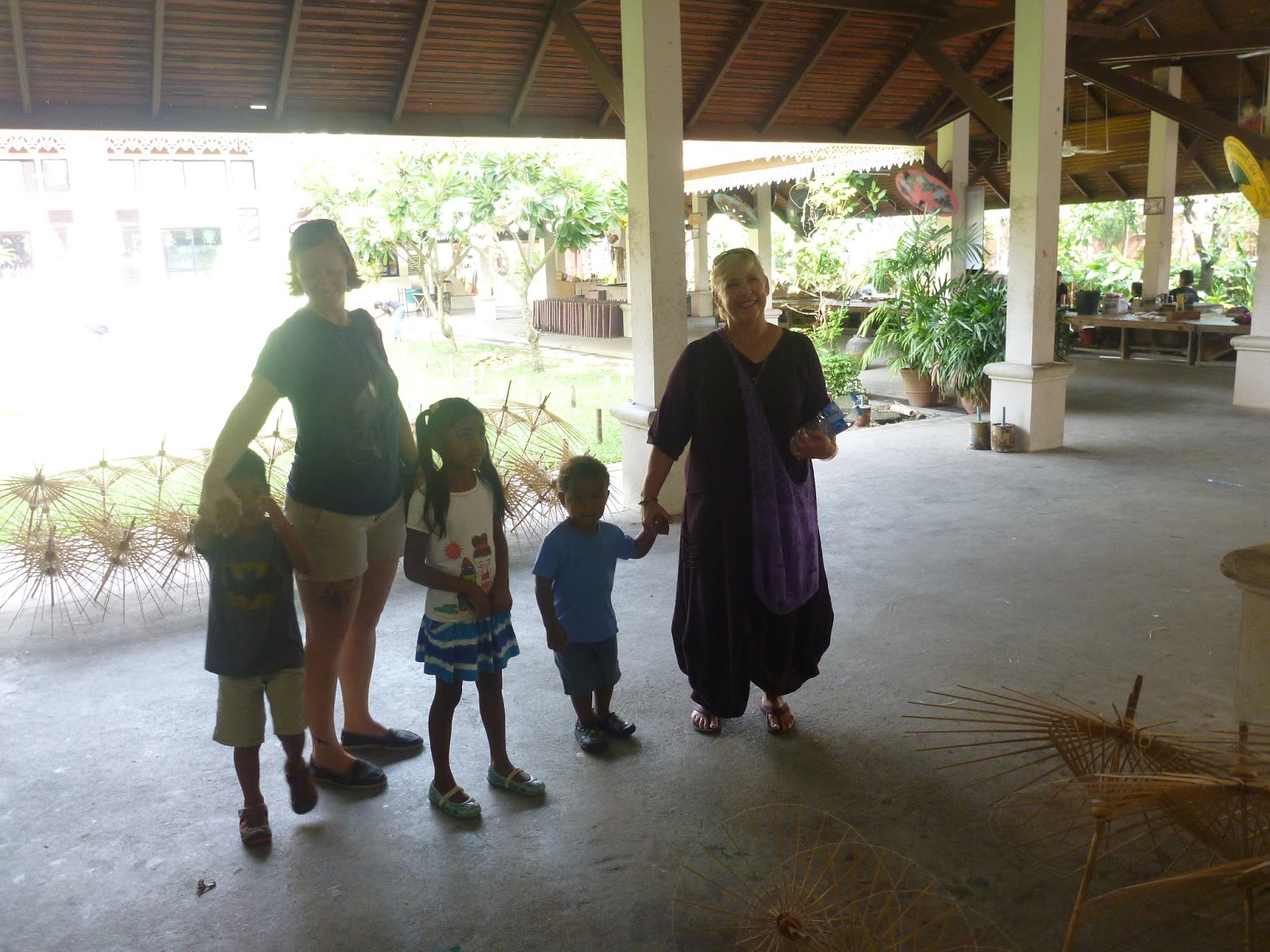 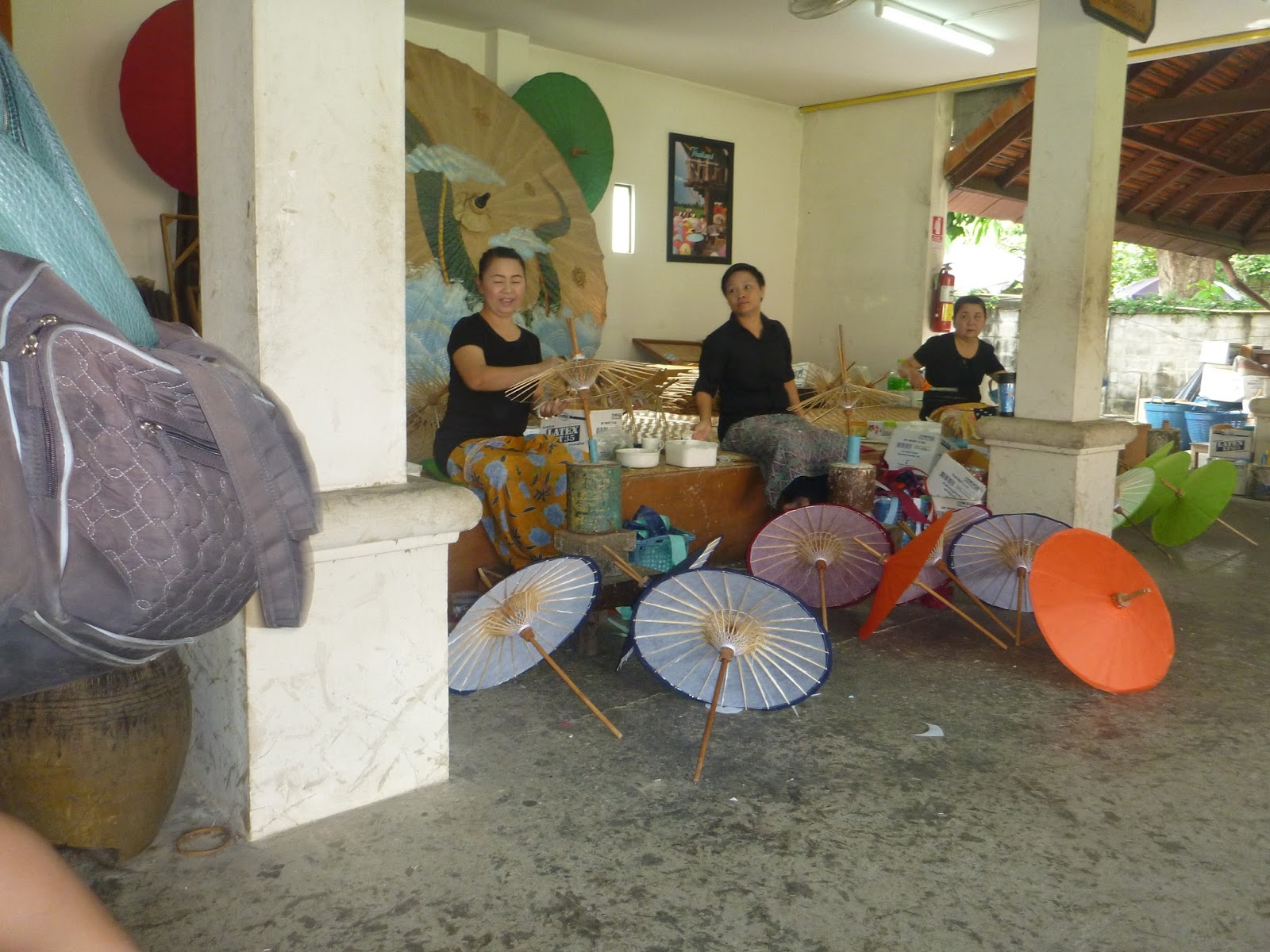 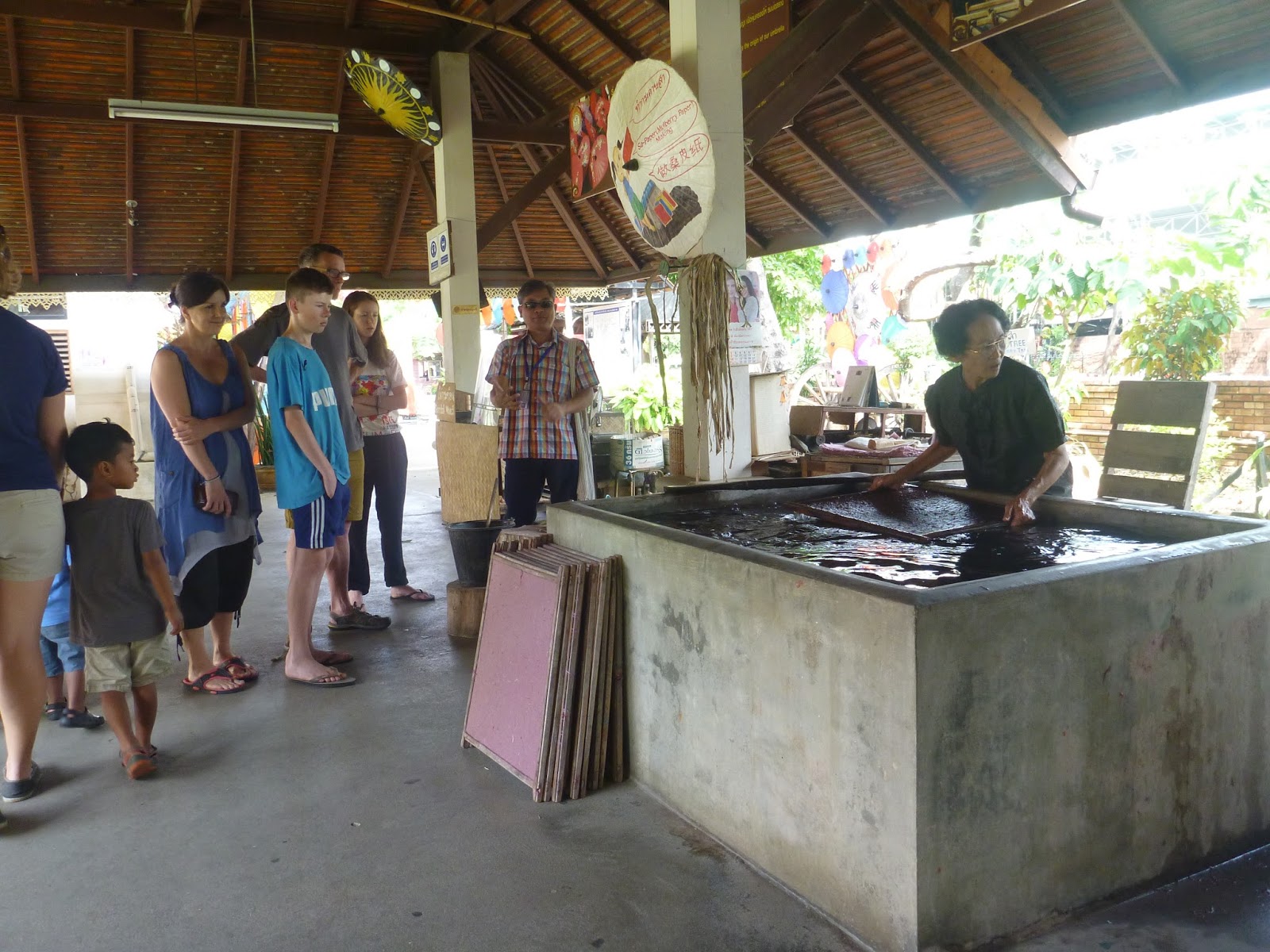 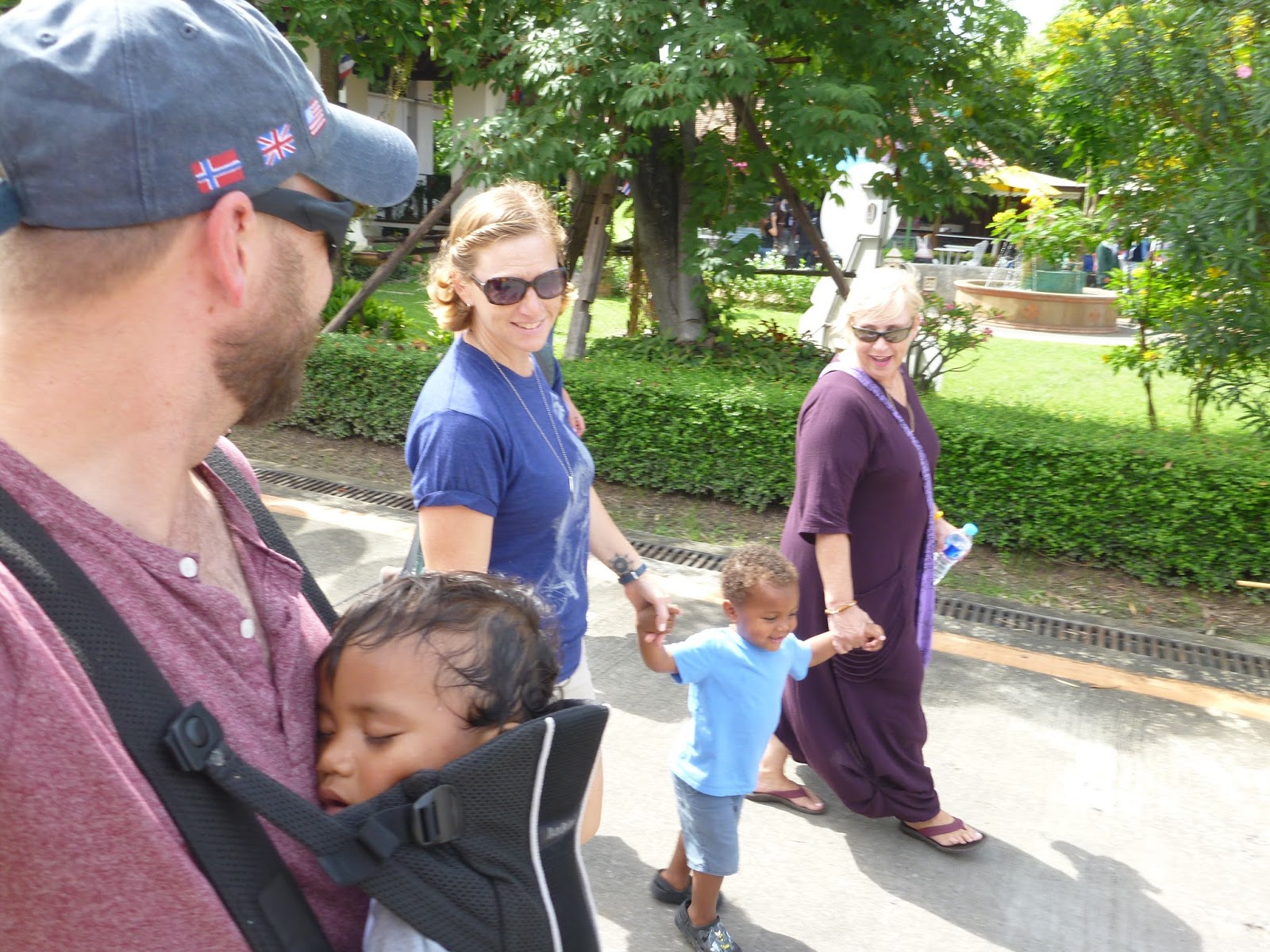 We stopped at a temple and I tried to explain Buddhism to Sky.  I don't think I got through because she kept asking why Jesus was sitting down... 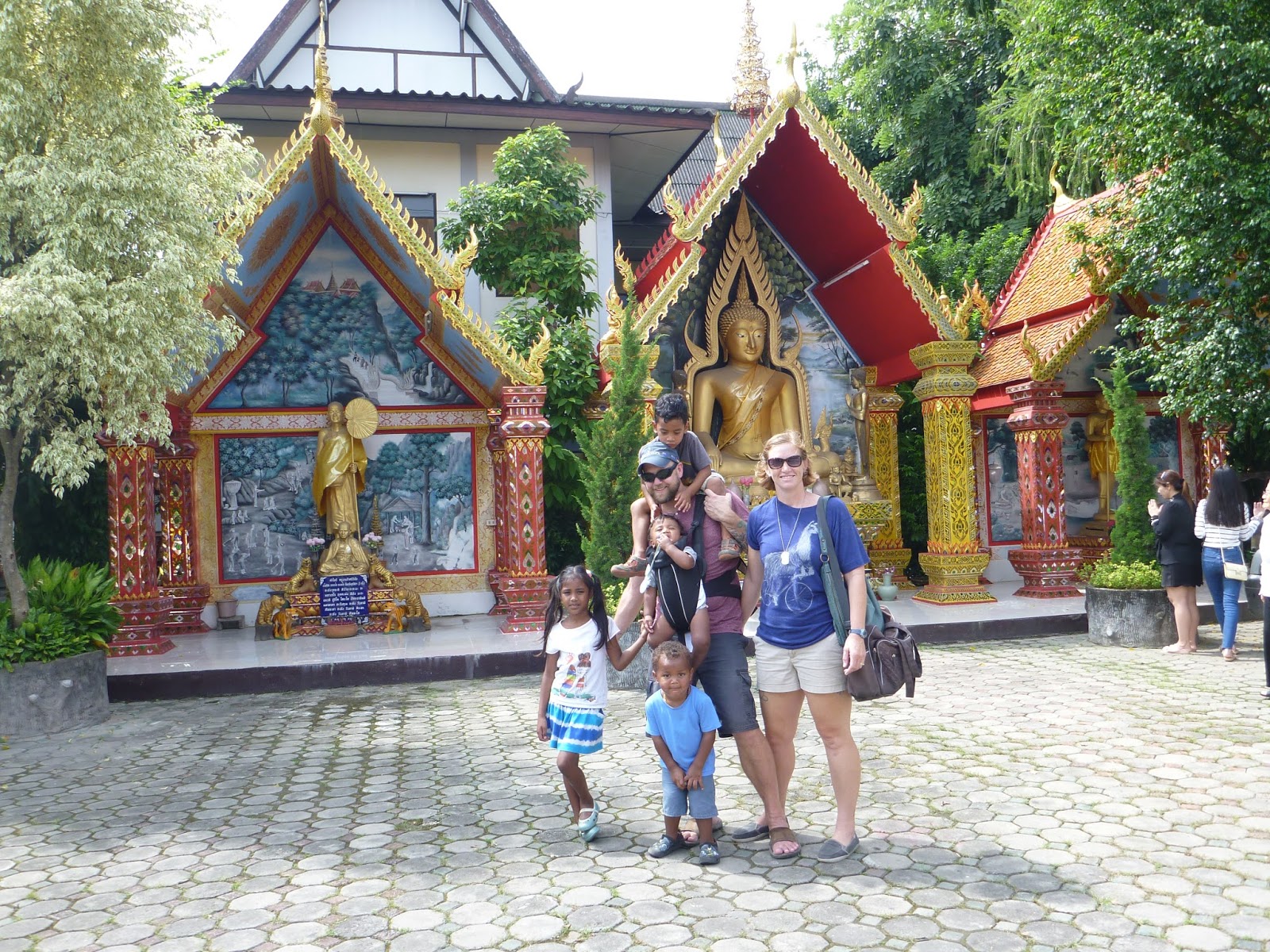 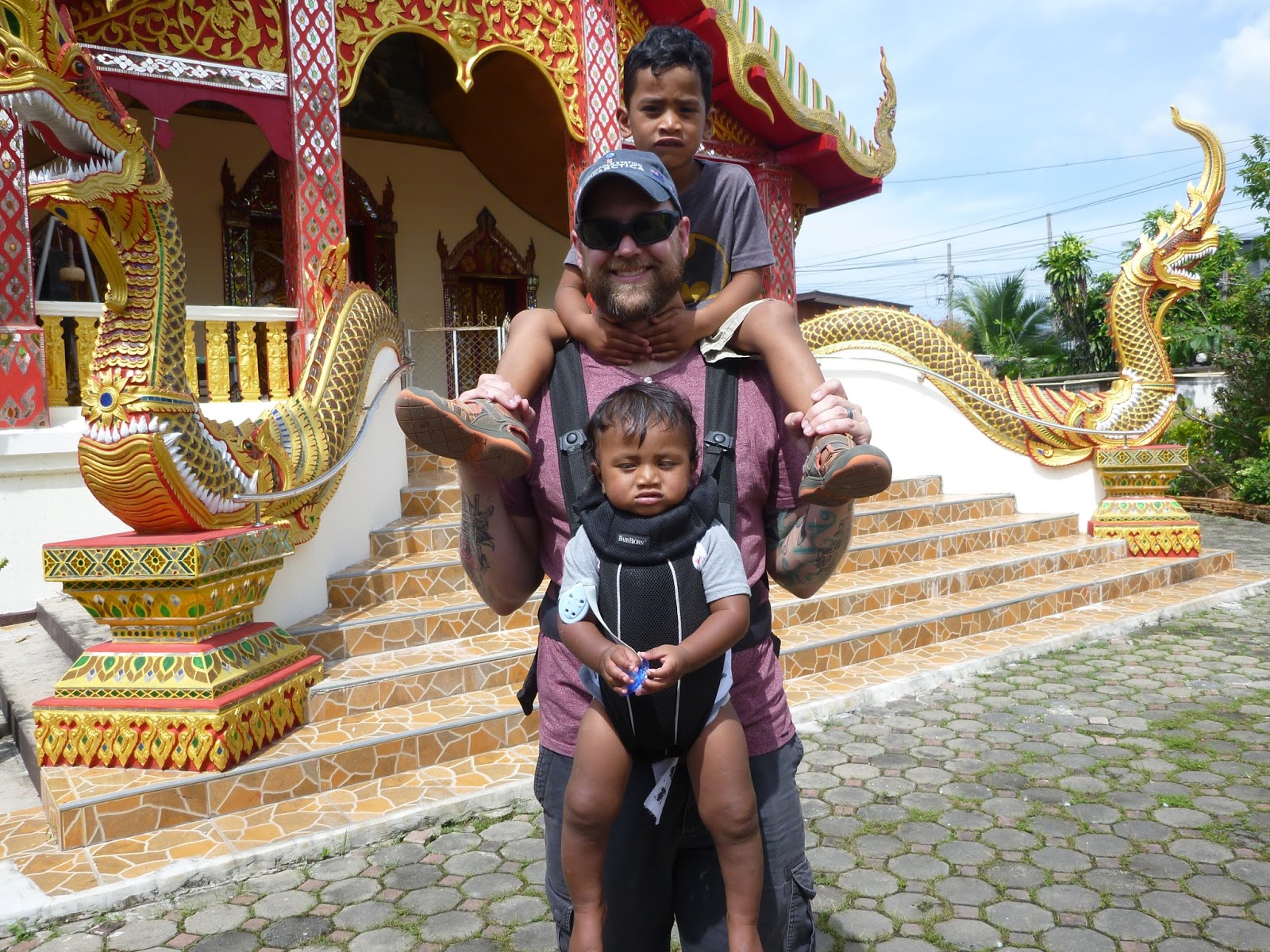 The rest of the day was filled with nap time and school work, and then the wedding rehearsal and dinner in the evening.  The kids went to bed at their normal time but jet-lag woke them up around 3 in the morning.  It was my turn to stay up with them, so this happened: 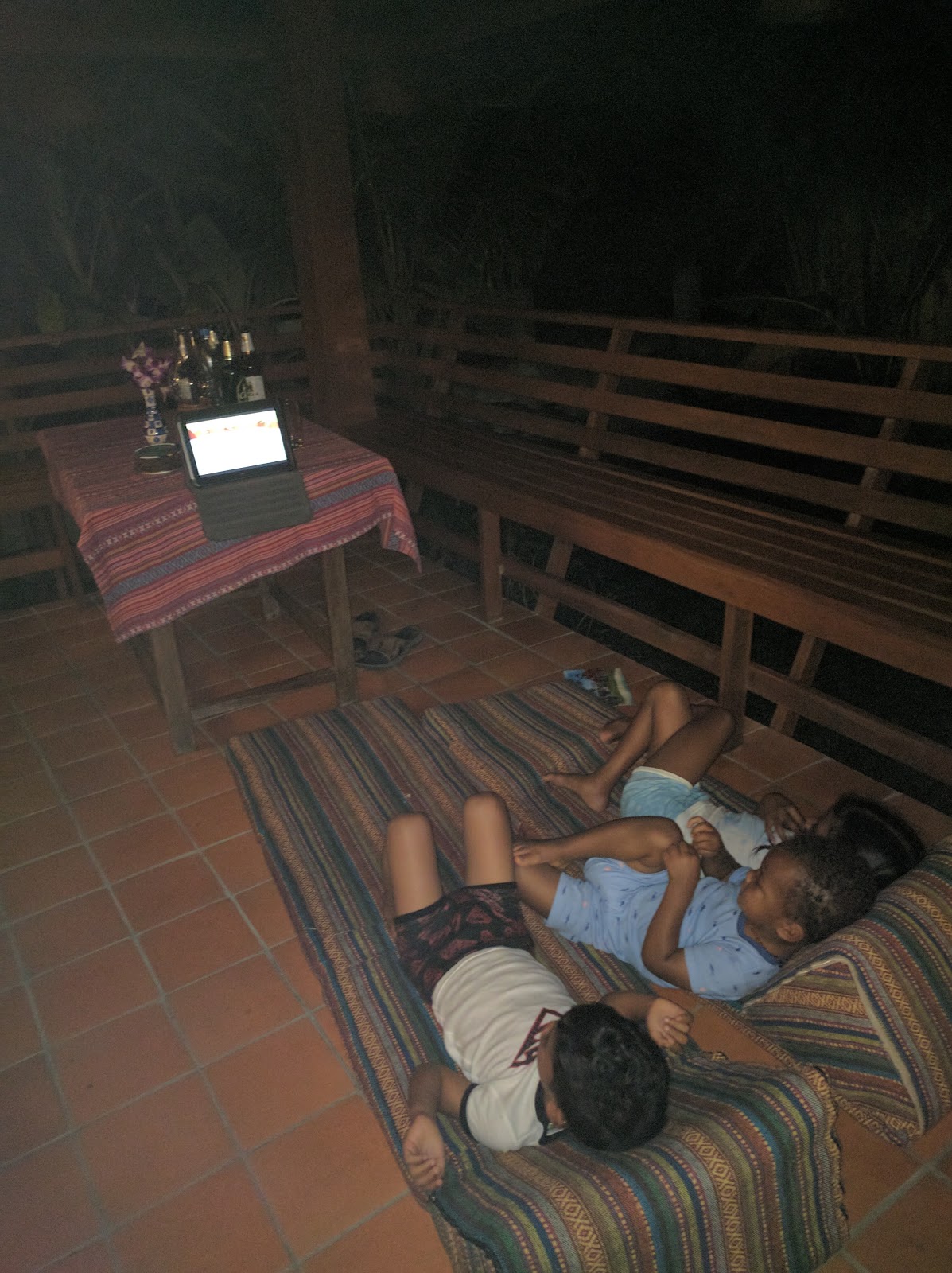 As I said in my last post, the hardest thing for D and I on this trip was dealing with the kids' jet-lag.  They're just not old enough to know to try to roll over and go back to sleep or to lay in bed with a book.  If they're awake, they're up and going.  To be honest, it used to make me really mad (I love my sleep!) but I've gotten a lot better at handling it.  Thankfully, the resort had great wifi so we were able to stream TV shows for the kids when mornings started way too early.  Wild Kratts counts as educational TV, right?

Have you dealt with jet-lag and kids before?  What worked for you, or didn't?