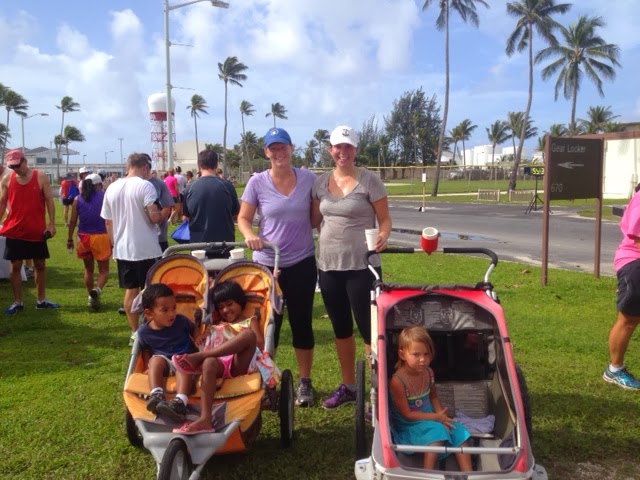 My friend Kristin and I participated in a running club relay run last weekend.  We took turns running a mile each, in turn, for a total of four miles.  My miles took about 9 minutes and Kristin's took about 10.  And we came in dead last. Behind elementary students. So last that the run organizer had already started announcing the winners when Kristin turned a corner and headed into the last 100 yards.  Embarrasingly last.  Everyone had said that it was all in fun, that they weren't going to push themselves- and did I mention that there were teams of elementary students?  We got beat by seven-year-olds.
In our defence, Kristin is almost six months pregnant and was pushing Fire in her jogging stroller, while I was pushing Sky and Kristin's daughter Ember in mine.  That makes those run times sound a lot better doesn't it?
Since we were the only ones pushing kids, I think that we were actually running in a category all our own, rather than running against the rest of the competitors.  That means that we actually won, right, since had the best times in our category?  If we take it even further besides being a winning team, both Kristin and I were individual winners as well.  She was the only pregnant runner and I was the only one with two (external) kids with me in the run.
So there you  have it- we may have come in last but I guess we were running a different race than everyone else and in the end, we won ours.﻿
Labels: A Kwaj
Location: Kwajalein Atoll, RMI