Happy House Wrap Up And Some Thoughts on Home Size

Towards the end of last year, in an effort to make myself feel happier and more comfortable in our home, I started something called "Happy House".  I did make some progress (see Part 1 and  Part 2) but between having two small children, celebrating several birthdays, and all the holidays, I lost my momentum.  Since I wrote my last post about it I was able to get a real bookshelf for the kids room, I swapped the love seat out for an armchair, moved in a piano, put down carpet on the stairs, and took the white-board paper off the dining room table.  Doing all that, and cleaning out a whole lot of toys, including the kids play kitchen, has really opened up and brightened up the house.  I still wish we had a better entrance area- right now, everything ends up on the washer, dryer, and kitchen counters- and a linen closet but overall, I'm happy with where we live again.
The stairs: 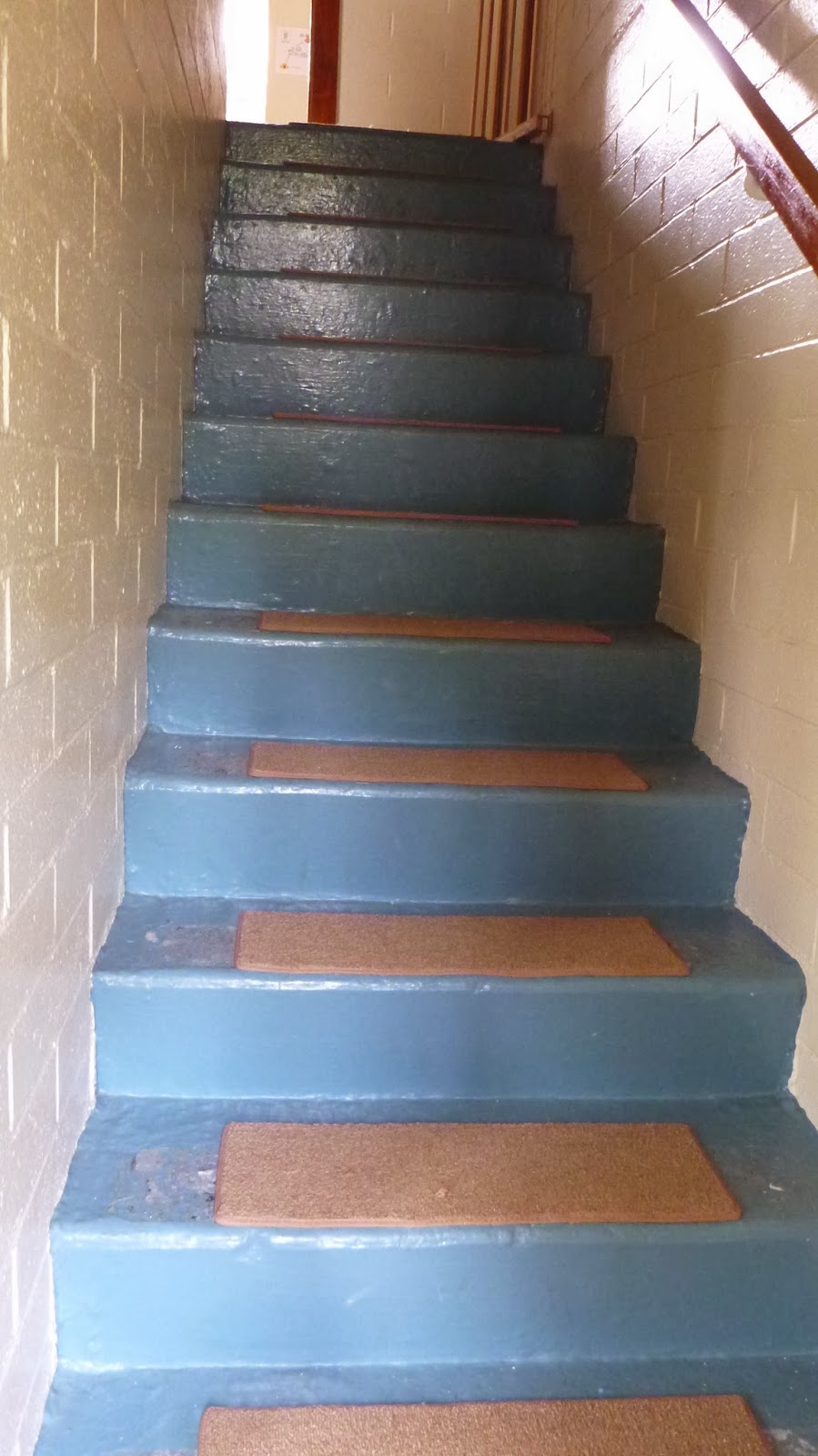 I forgot to take a "before" picture and I know that's not a great "after" picture but I adore this carpet.  I found it on Amazon for a great price and it was super easy to install.  It's nice and soft under our feet and it's wearing really well, even with two cats that occasionally claw it.  It even makes the stair well seem brighter.  I covered all but one stair: 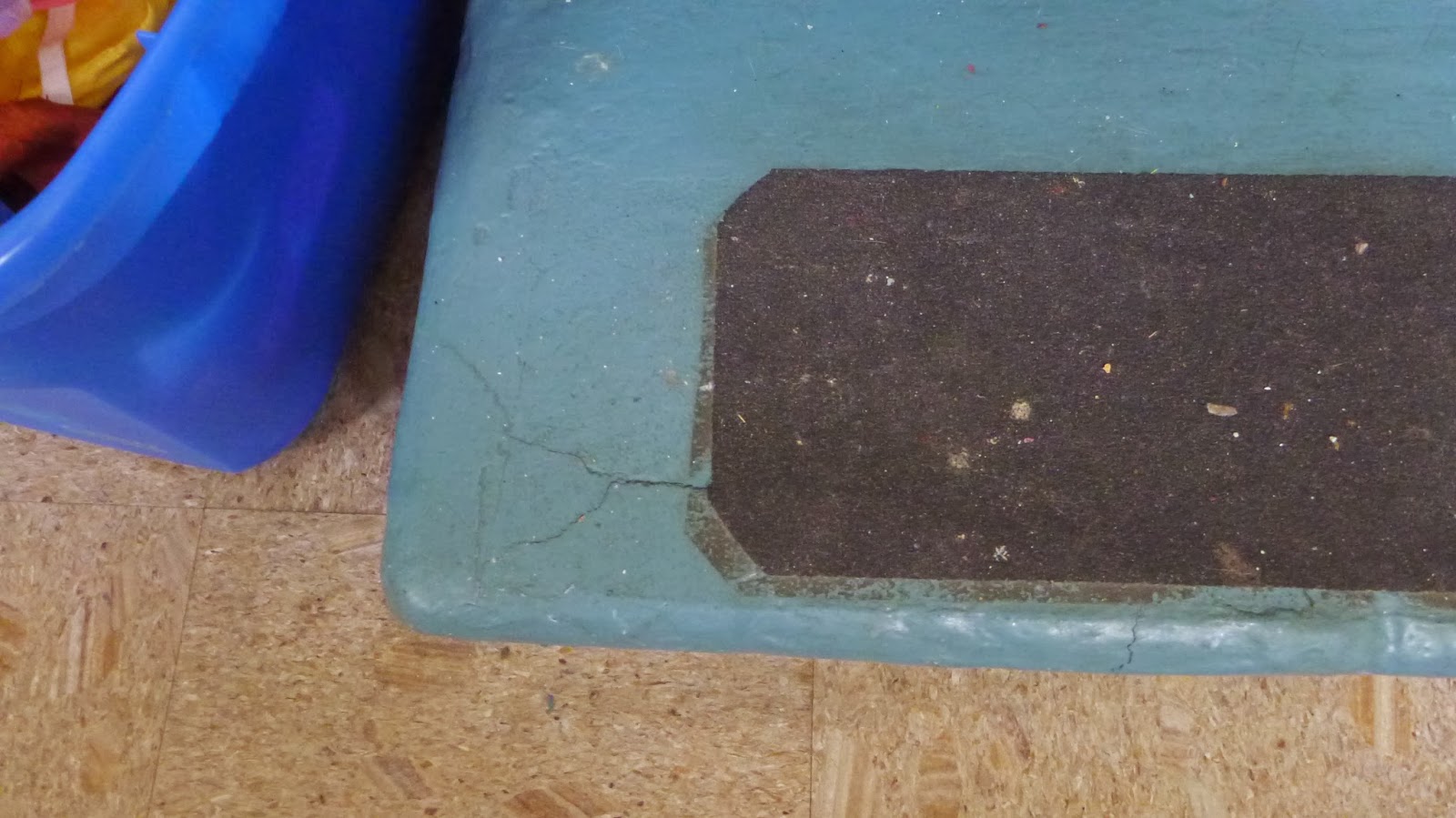 When I started peeling the (awful, scratchy, dirty) tread up, that little crack on the left turned into hole about an inch deep and half an inch wide so I decided to leave it on to keep the stair from cracking further (and to keep my kids from picking at it!).
The dining room table: 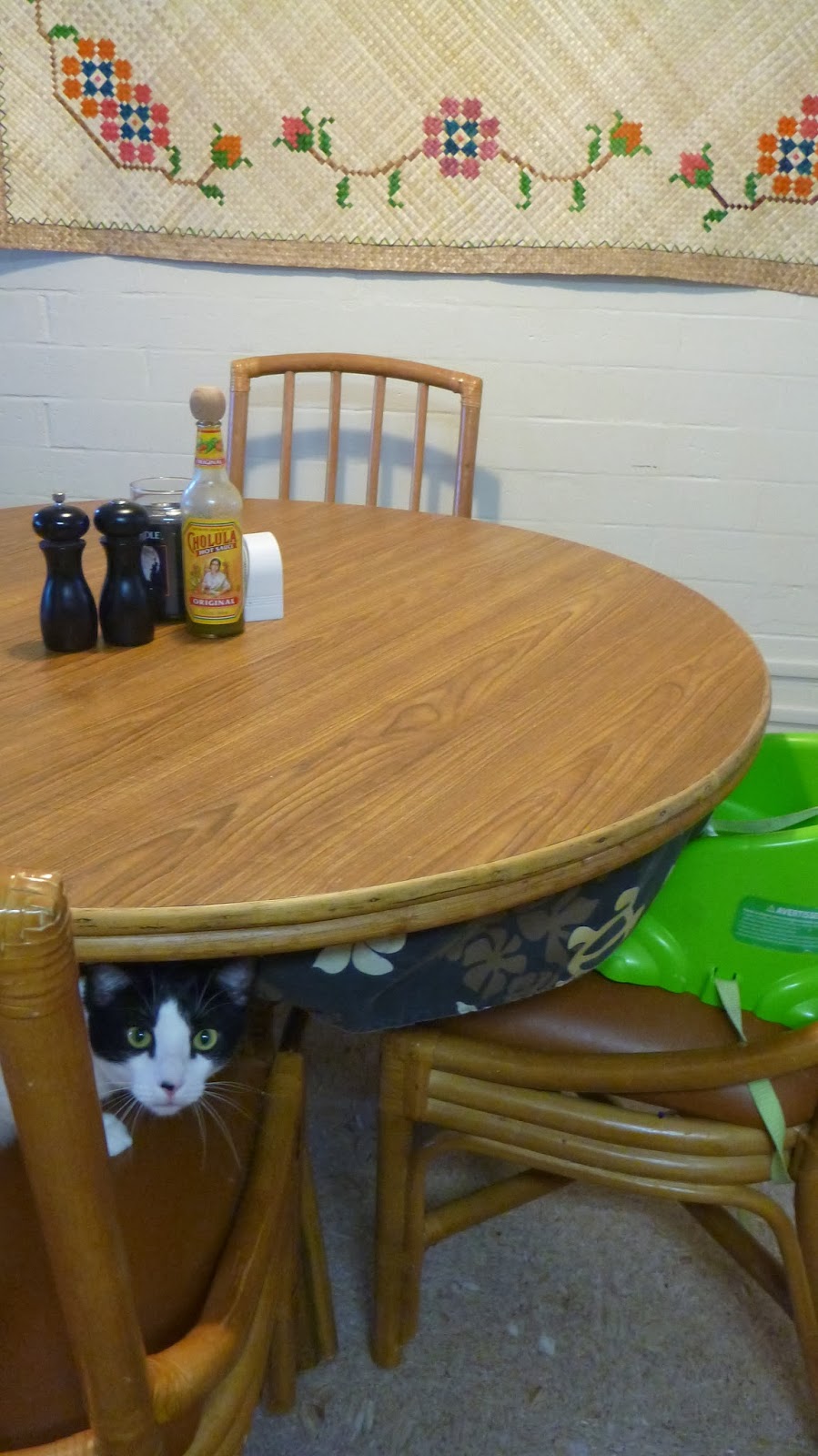 The kids loved having the white-board paper on the table and it was a great distraction for them before dinner but as you might guess, it started getting dirty at the seams and the kids started picking at it.  We decided to pull the paper up and were pleasantly surprised to find that we liked how the table top underneath it looked.  Go figure.  I think we'll probably put down paper again when we get tired of the faux wood laminate and just switch back and forth between the two.  I did make the seat covers for the chairs but they didn't even last a month.  The kids and the washing machine just wore them out.  The "table cloth" still looks good and it only took one time of having the tacks holding up end up in feet to convince the kids not to play with it.
I've been thinking a lot about our house, what we like about it and what we don't, and how possible it will be to have three kids in it (don't go throwing us a baby shower yet- we're still just talking about it!).  Ours is one of the most common house types here on Kwaj: a two-bedroom, one-bathroom, two-story half of a duplex.  It's about 1100 square feet.  Both the kids sleep in one bedroom and we do most of our living downstairs and outside.  While we would qualify for a three-bedroom house if we did add to our family, D doesn't want to move unless we'll be going into a specific type of house in a specific part of the island.  I'm not as picky as he is but since I do like our house and it's location, I don't want to move either unless it's a move up in condition.  D and I both think it would be manageable to have another child while we live in the house we have now.  We might have to switch bedrooms with the kids, find a place downstairs for the computer, that sort of thing, but nothing that's not manageable.
When we lived in Omaha, our house was 1400 square feet and D said that he thought the house was way too small to have kids in.  Now, I can't imagine what we'd do with all that extra space!  We've become very comfortable with the small space we have and we make it work by doing two things: we don't keep anything we don't need and we maximize the storage space we do have.  The second one is easier because of the first.
I said earlier that we got rid of a lot of the kids toys: I gave away boxes of stuffed animals to the elementary school toy drive and before Christmas, I sorted through all the toys and pulled anything that didn't get played with regularly or that had been outgrown.  The kids loved their play kitchen but it and the food took up space and it just wasn't getting used much any more so it went to a friend whose kids would play with it.  C and I went through her dolls and decided which ones "should go to other little girls".  She has four now and the live on her bed instead of taking up shelf space.
As far as maximizing storage goes, we use every nook and cranny to store things.  Suitcase are stacked inside of each other and stored above closets﻿, everything is stored in boxes or plastic containers that can be labeled and stacked, and if a box hasn't been opened in a year, it gets ear-marked so that we can decide how much we really need whatever is in it.  And again, because we don't have a lot of stuff, we don't need to store a lot of stuff.  I'll come off my soapbox now and say that there are times when I would trade almost anything for a linen closet!
How big is your house and how many people live in it?  How do you deal with "stuff" and organization?  Any good tips to share?
﻿
Labels: Family Kwaj
Location: Kwajalein Atoll, RMI