We laid low this morning, hoping that some quiet time in the condo would help get the day off to a better start.  After some TV and family time, Sky and I headed out to see a children's symphony put on by the Singapore Orchestra.  Sky has always loved music so I was really excited for her to have the chance to see this show.  Unfortunately, I underestimated how long it would take to get there and we got to the theater 20 minutes late.  I had been very worried that they wouldn't let us in after the show started so I was really tense about it before we got there, especially since I chose to walk from the subway station to the theater instead of taking a taxi.  To add to it, our big stroller was broken and I decided not to bring the little one so poor Sky, who never walks more than a few hundred yards at home, had to hoof it almost half a mile (well, to be honest, I carried her quite a bit, which made me even more tense, but she was still a champ).
Luckily, the did let us in and the show ran longer than I thought it would we still got to see a lot of it.  Sky loved hearing all the instruments play and she was able to tell me what she thought the music sounded like (loud, quiet, happy, sad).  The second part of the symphony was an adaptation of Babar the Little Elephant.  Sky's never been to a play so she didn't entirely understand what the actors were doing on stage and her main takeaway from that part of the show was that a hunter shot Babar's mother, but all in all, it was a great time.
After the show, I took her to Swenson's (kind of like Friendly's, for you east-coasters) for lunch (where she had ice cream and french fries to eat) and then we caught the train back to the condo.  Sky was so tired by our morning that she fell asleep on me as soon as the train started. 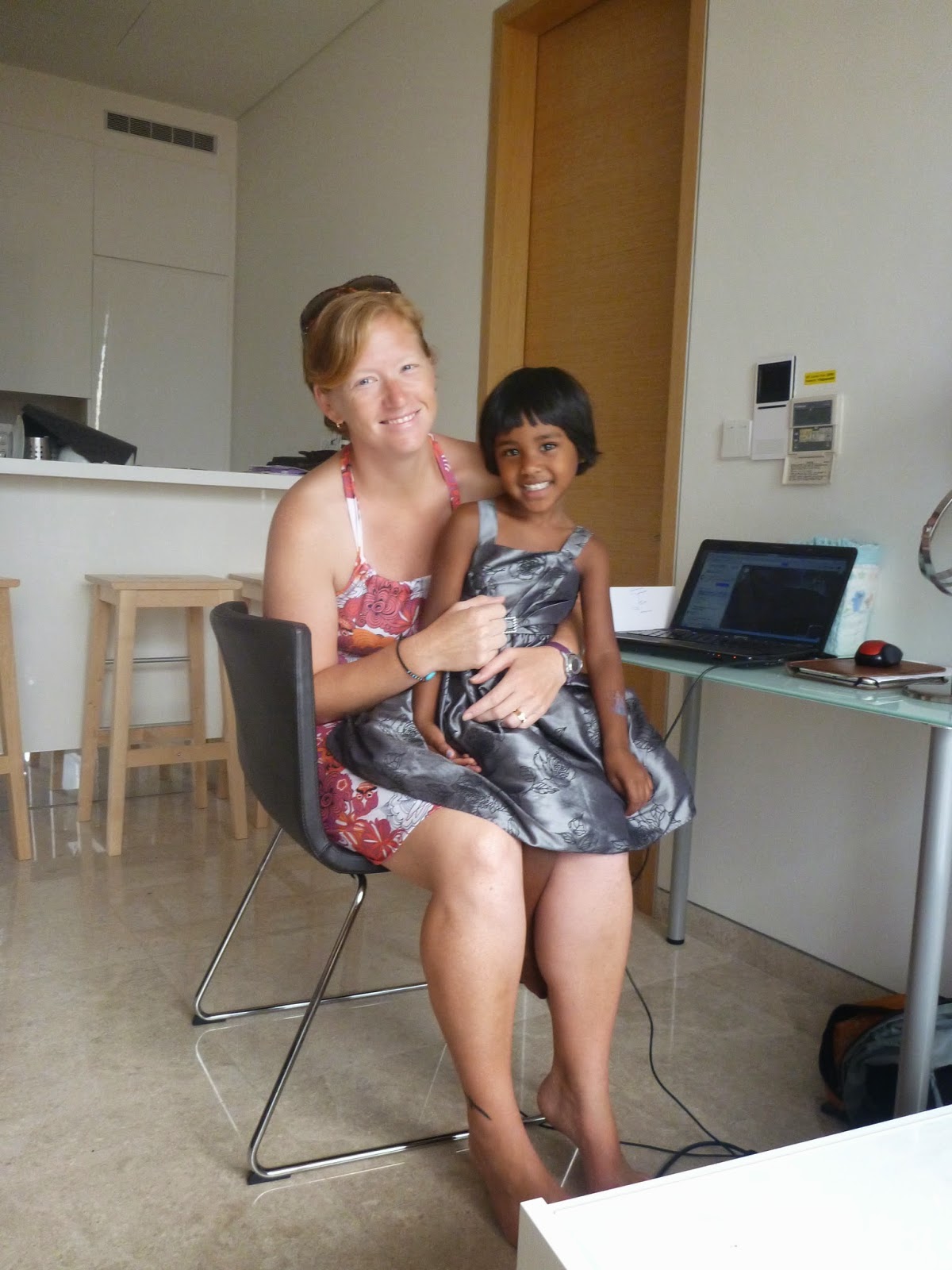 All dressed up for the symphony 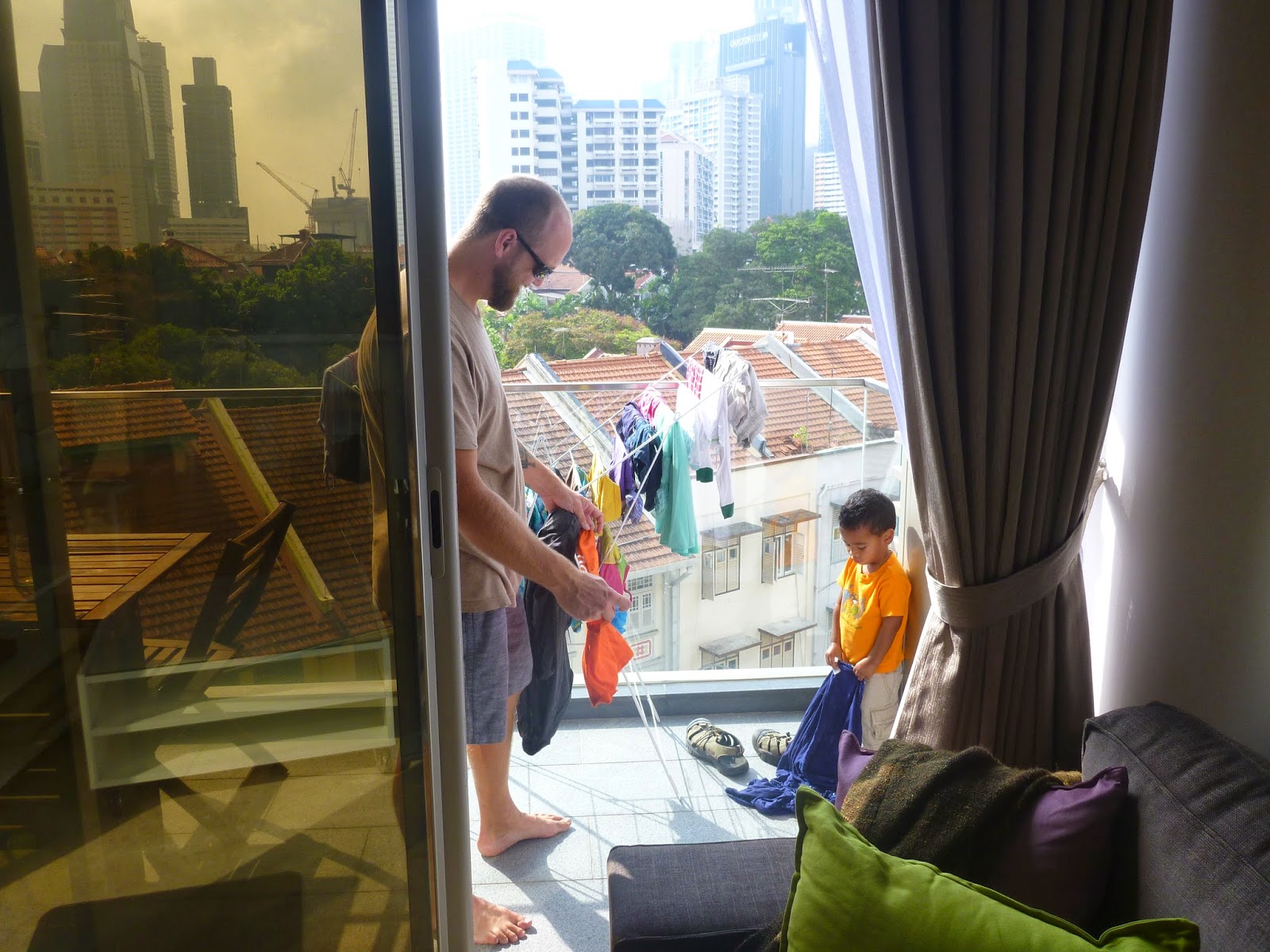 And what did D and Fire do while Sky and I went to the symphony?  Laundry, of course!

After naps, we took the kids out to the Children's Garden at the Garden's by the Bay.  After wanting to go so badly yesterday, Sky and Fire practically had to be pushed out onto the splash pad today.  This is only the second time they've played in a splash pad so it's all new and scary to them.  Fire finally got things going by pushing Sky into a jet of water.  Once they were wet, the warmed up to it and had fun playing together for almost an hour, until they came back to us blue-lipped and shivering. 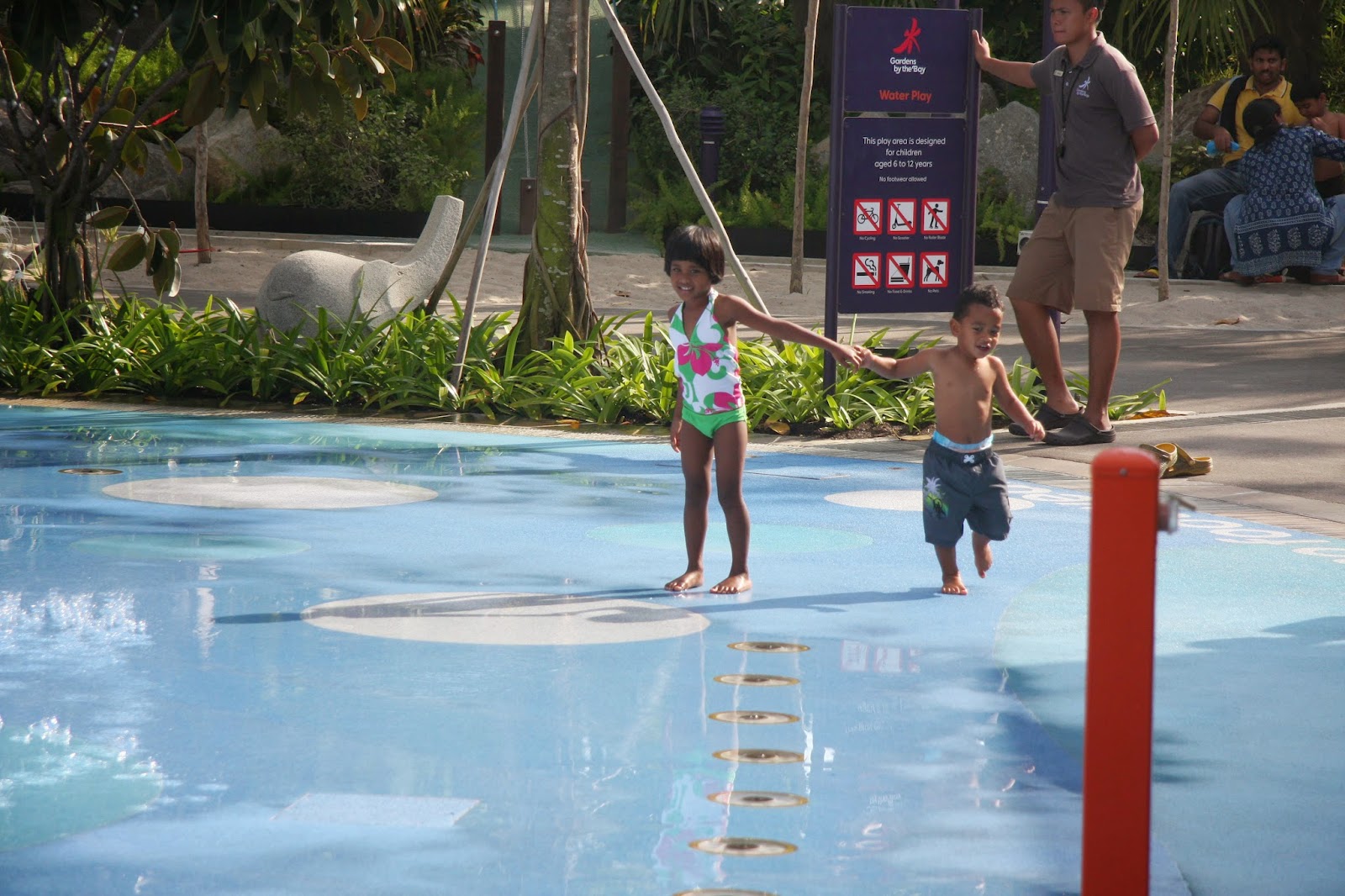 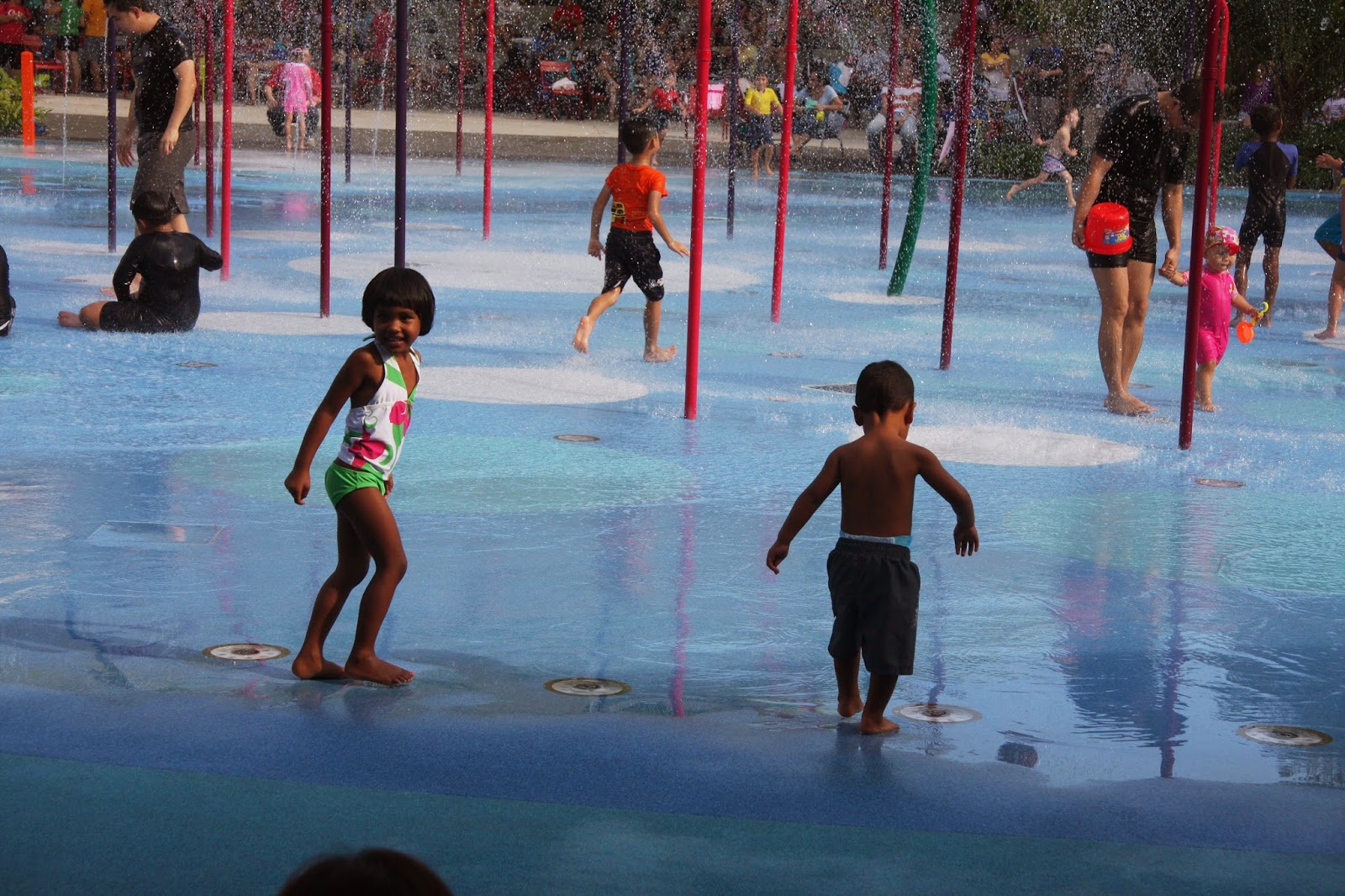 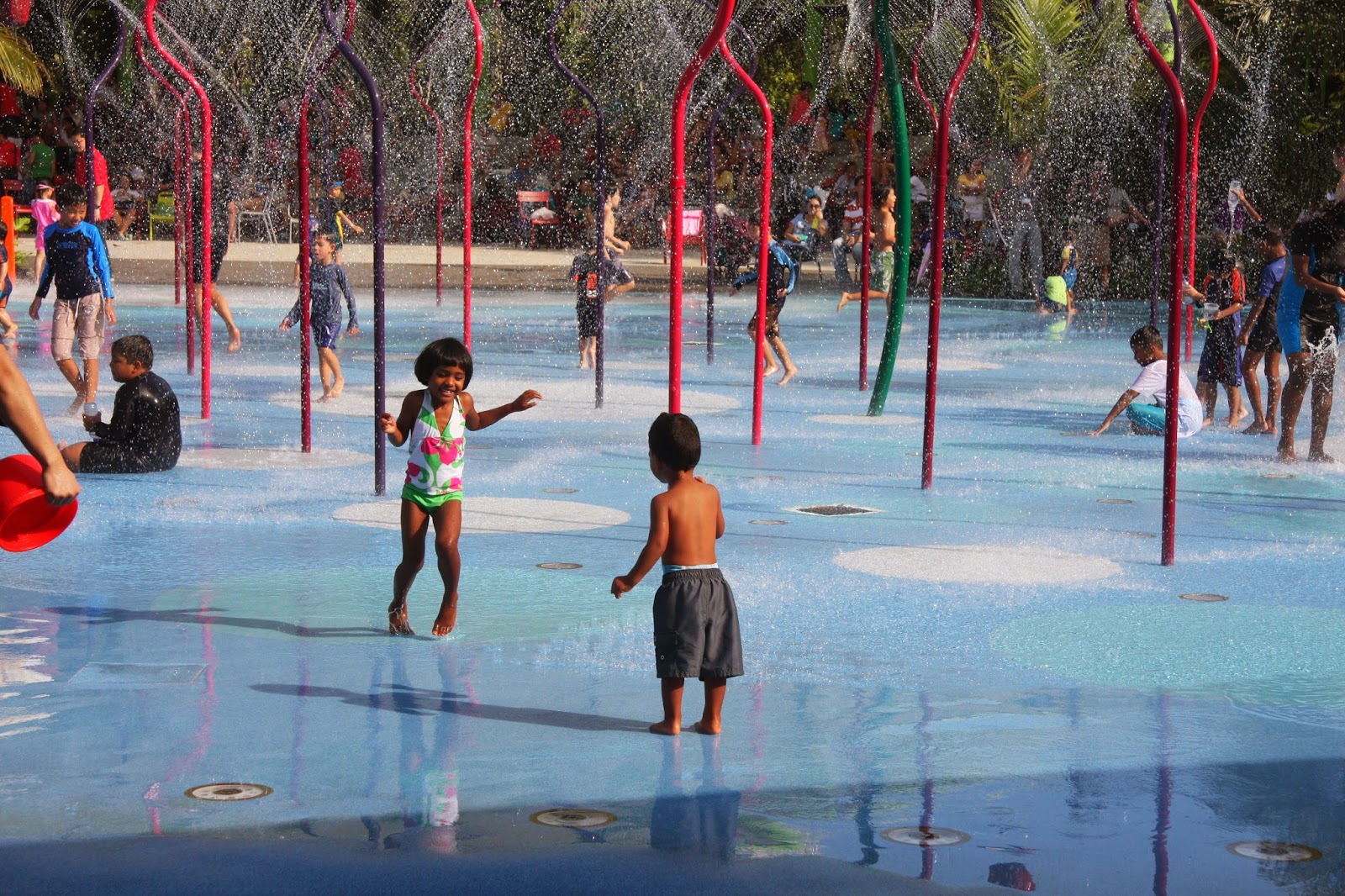 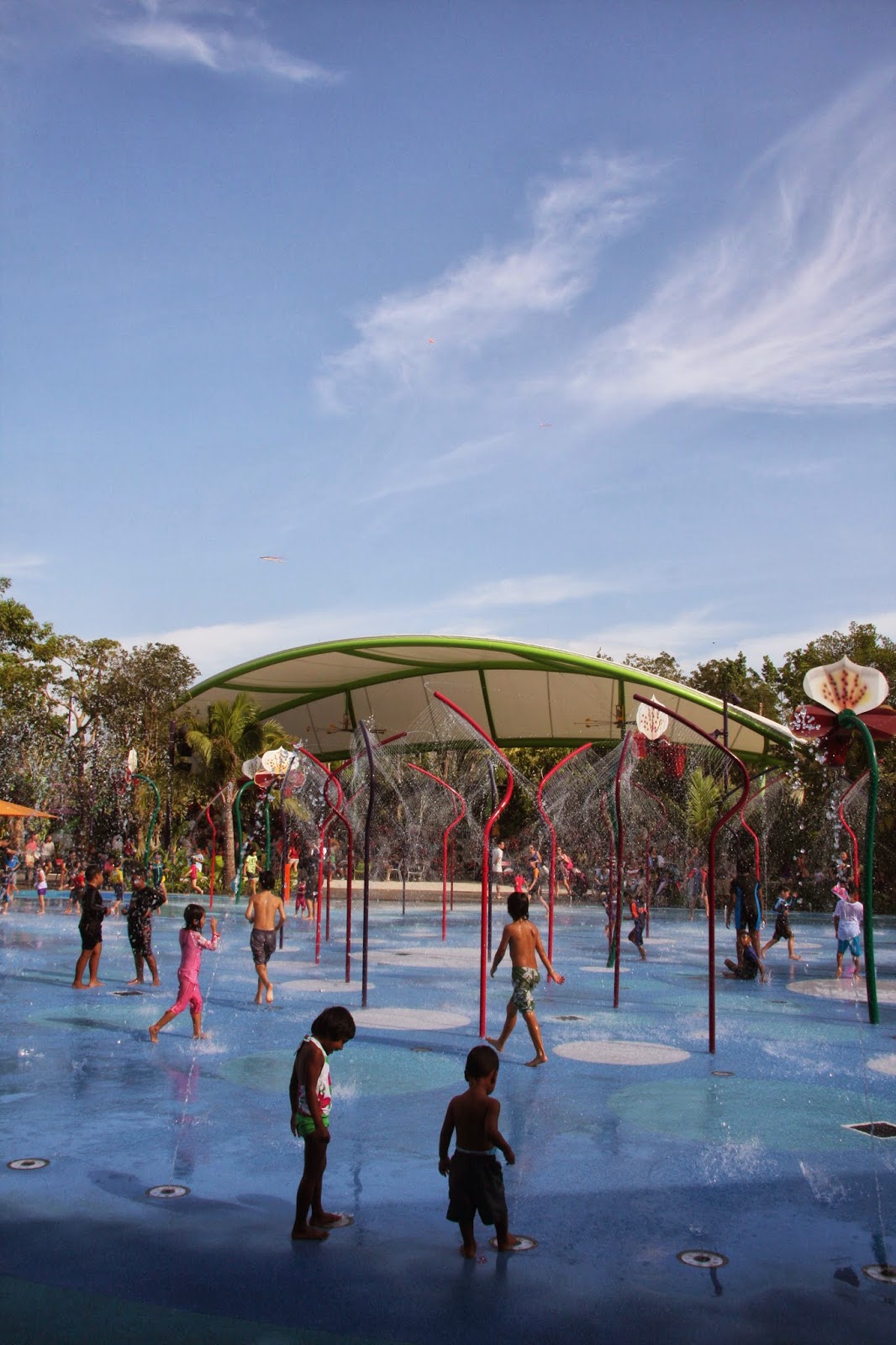 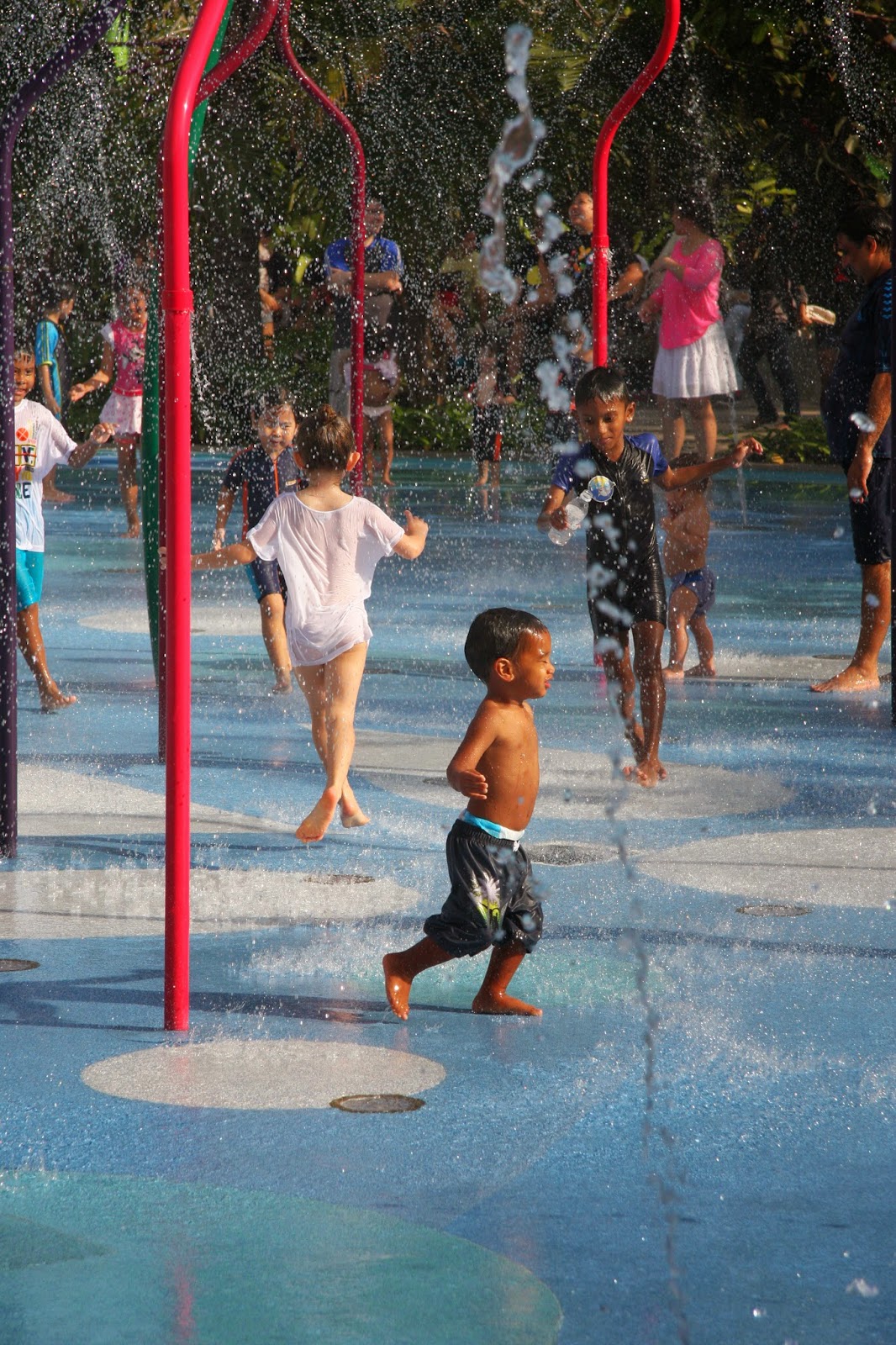 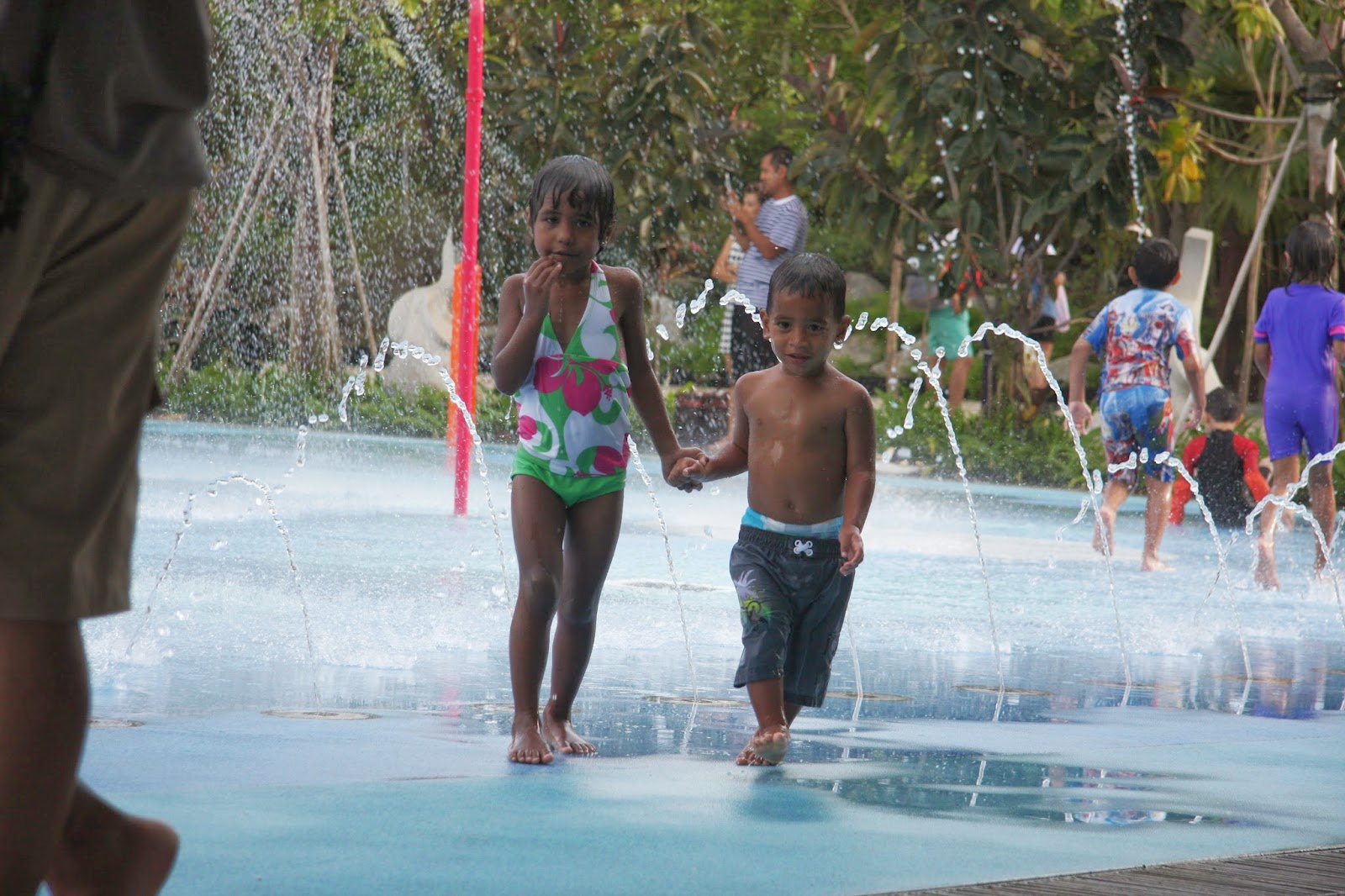 After the splash pad, we took the kids through the Adventure Trail and playground.  They had a lot of fun trying all the walkways and slides and Sky loved climbing around on the huge play structure at the end that was built to look like a tree.  She actually had so much fun that she ended up kind of overstimulated and hyper.  The kids just aren't used to being around a lot of people or to having those kinds of things, like a super-awesome play structure, available to they do have time, sometimes they get overloaded.  We ended up having to leave earlier than we thought we would because Sky was so far gone that she'd stopped listening to me or D at all. 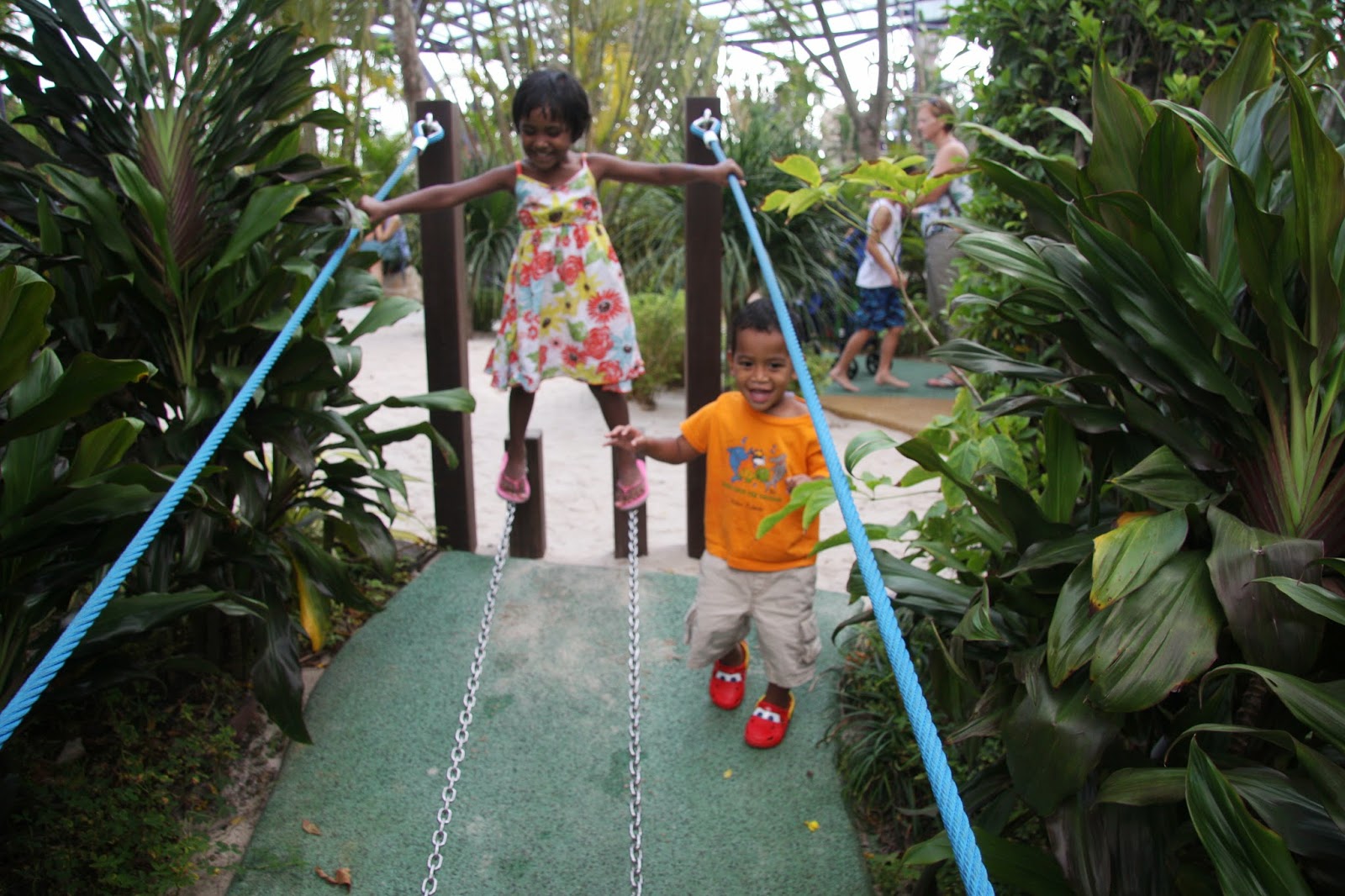 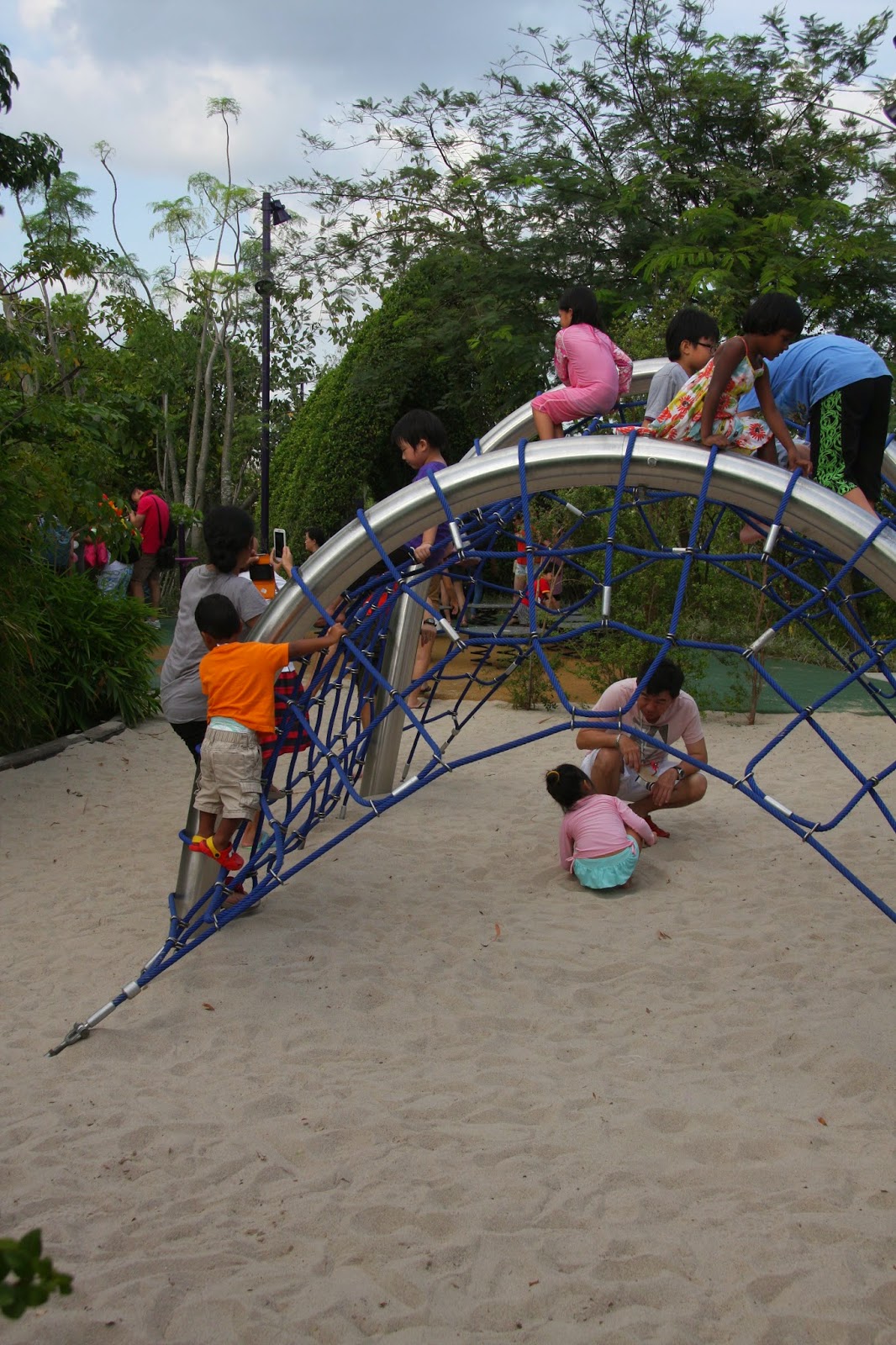 Next stop: Chinatown Food Street.  It's kind of kitchy but they've restored and covered over one of the shop house streets here in Chinatown and in the evenings, it's full of tourists.  We joined the throngs out looking for good food and got a selection to bring home (no more restaurants for us after the last two nights!).  We ate dinner on the balcony and then let the kids watch some Little Einstein while D and I had a little time for ourselves after they finished eating.    After the rough day yesterday, we definitely needed the smoother day we had today. 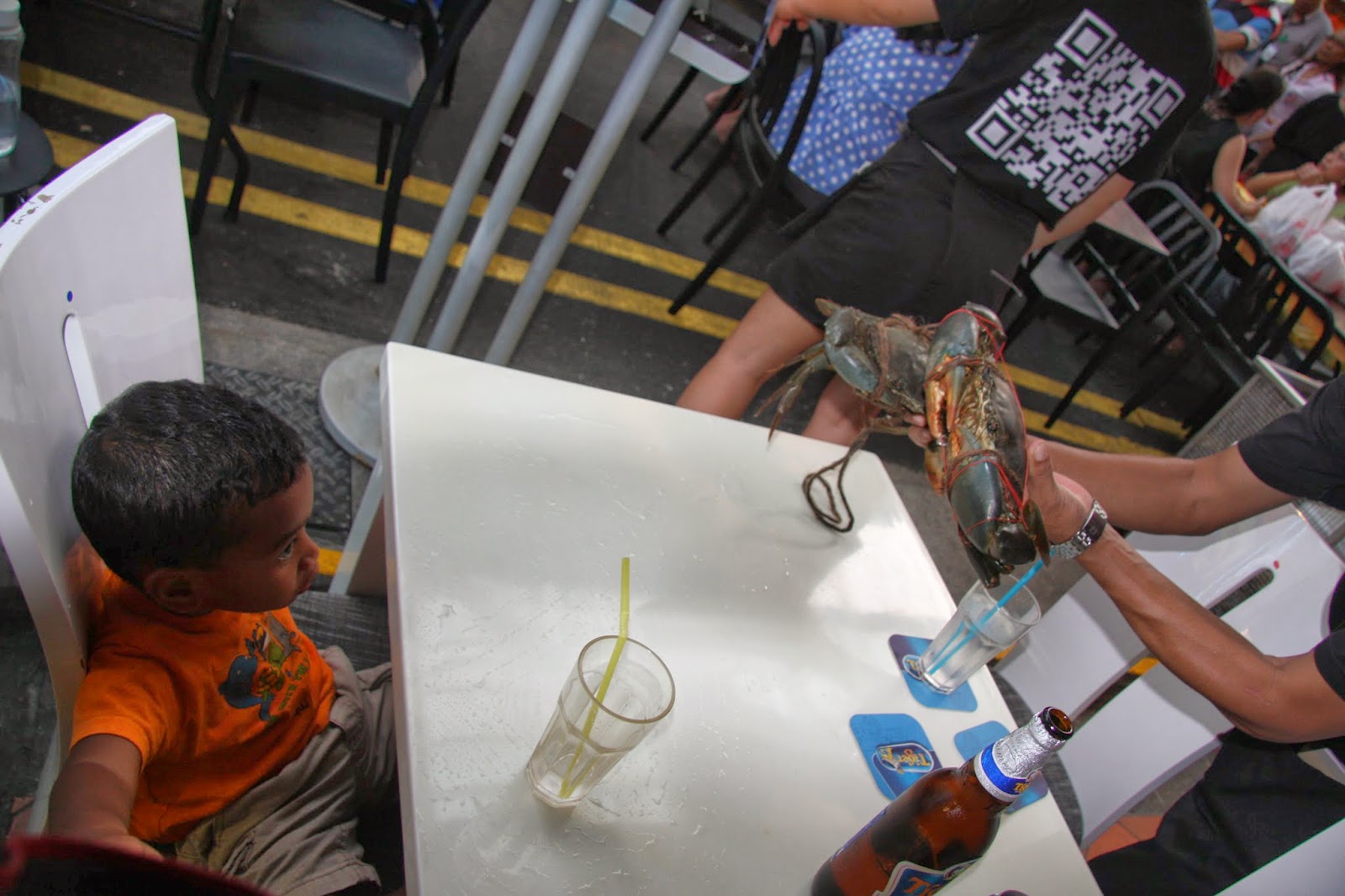 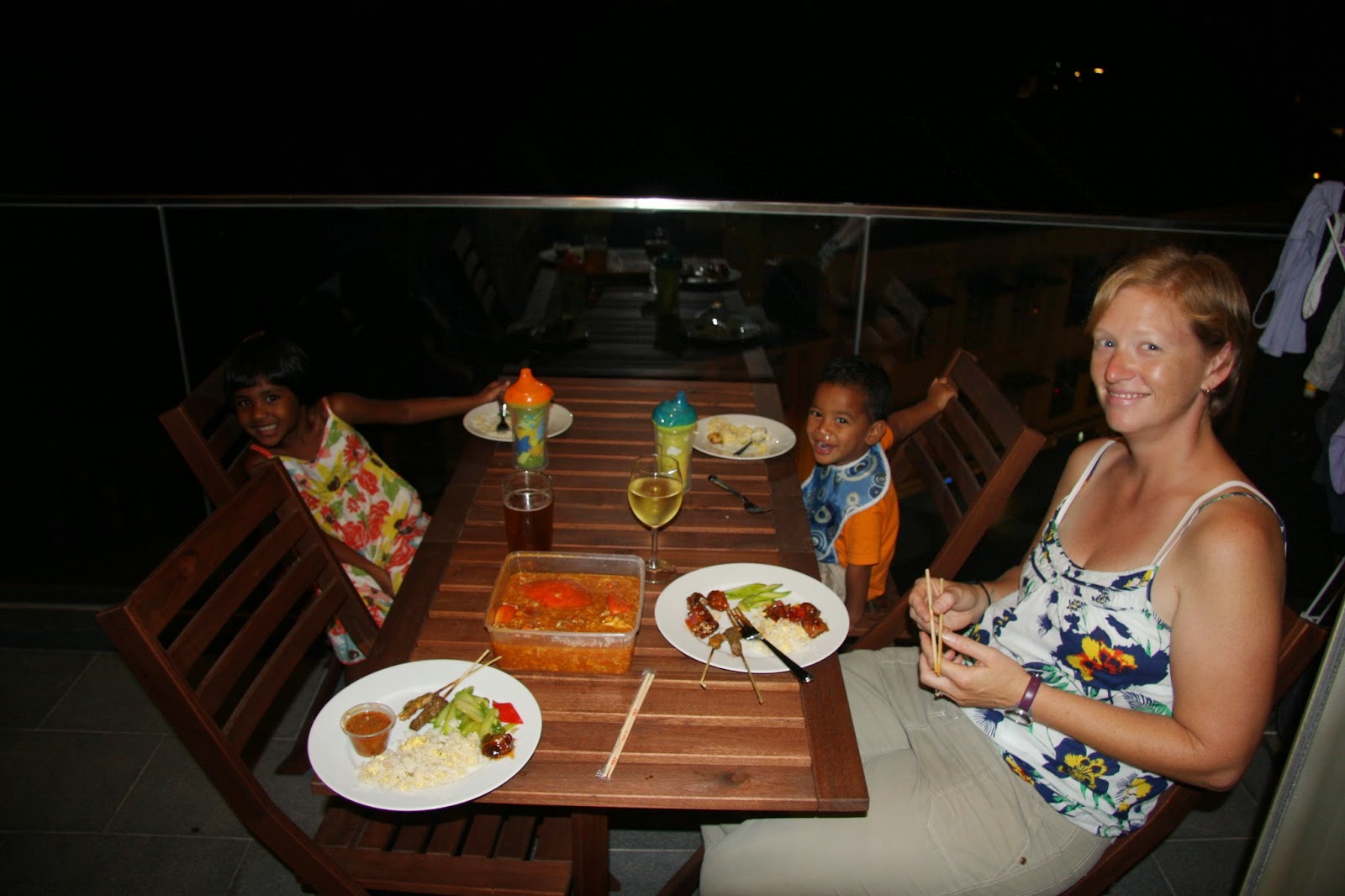 Dinner on the balcony 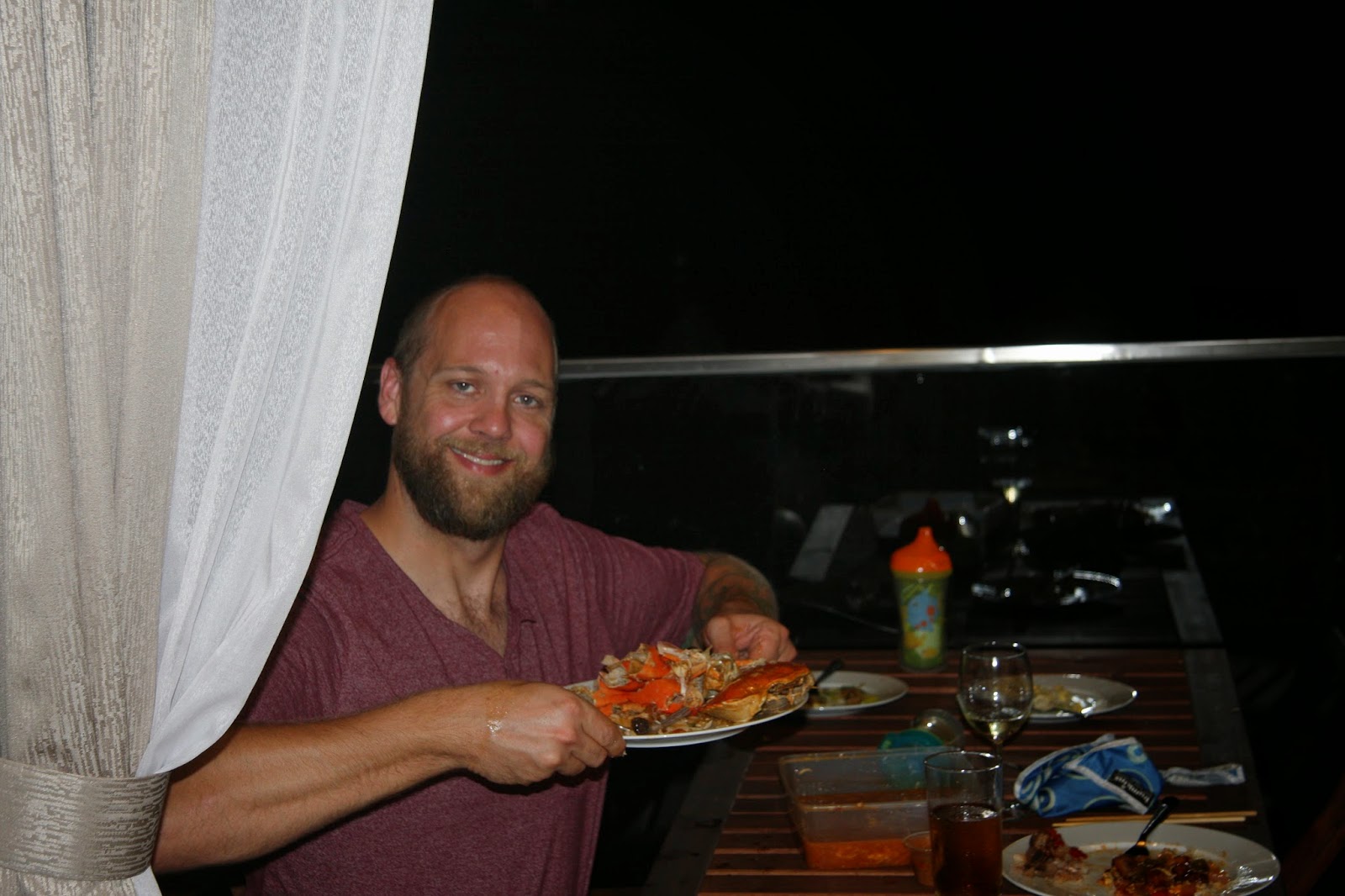