Into The Jungle: Day 1 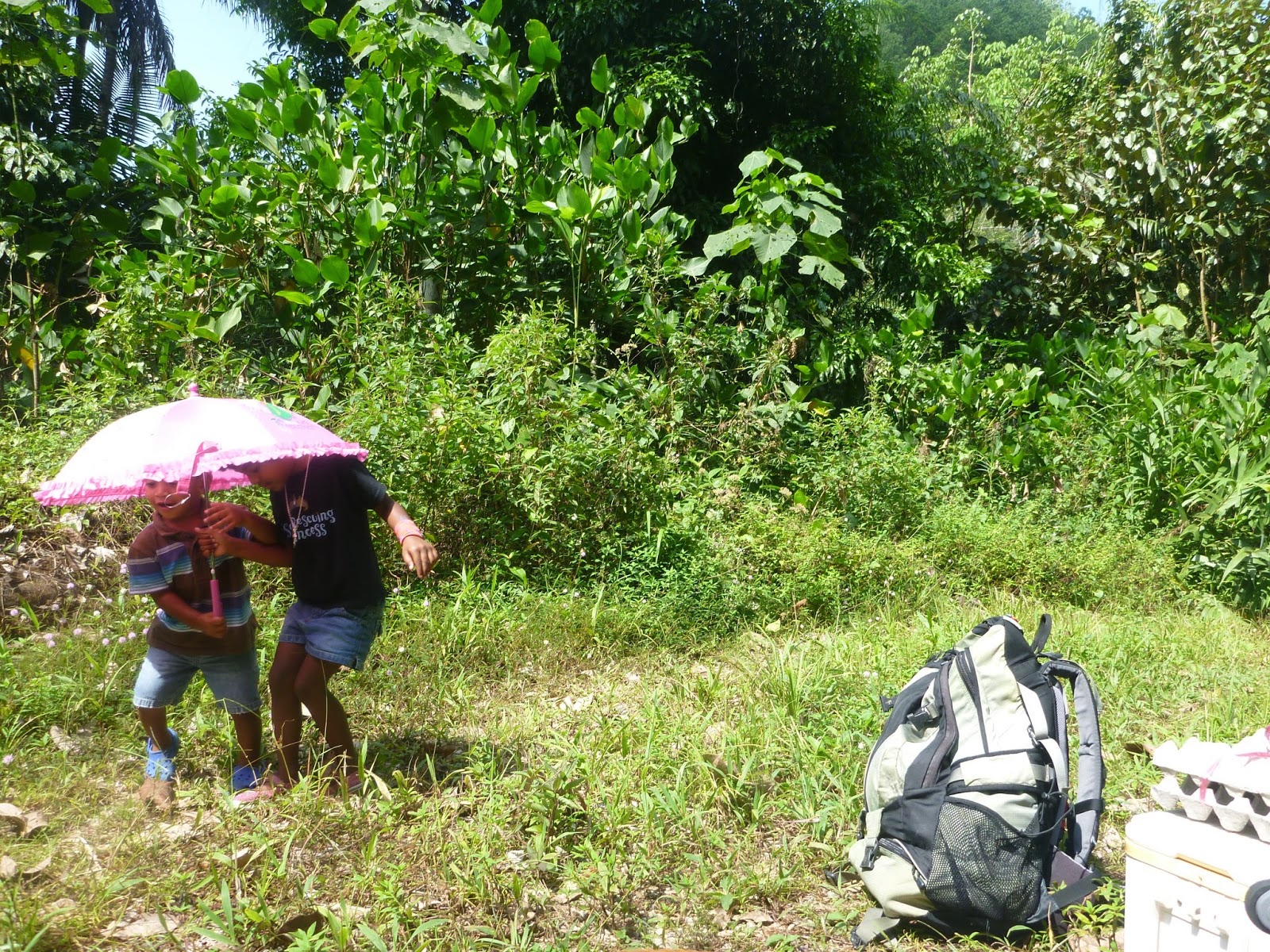 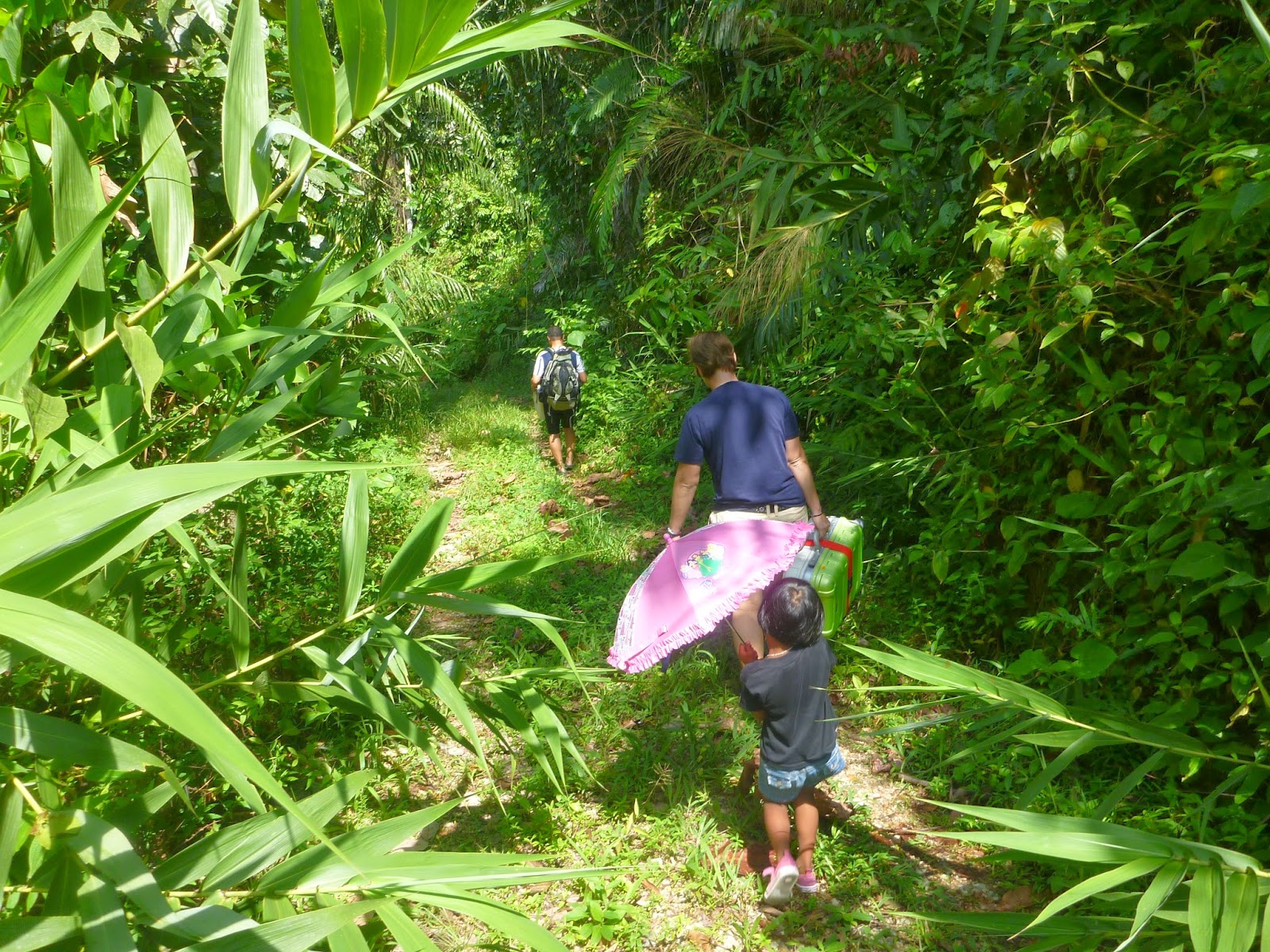 Hiking in to the camp from the road. Sky was a little trooper and walked the whole way herself.
﻿ 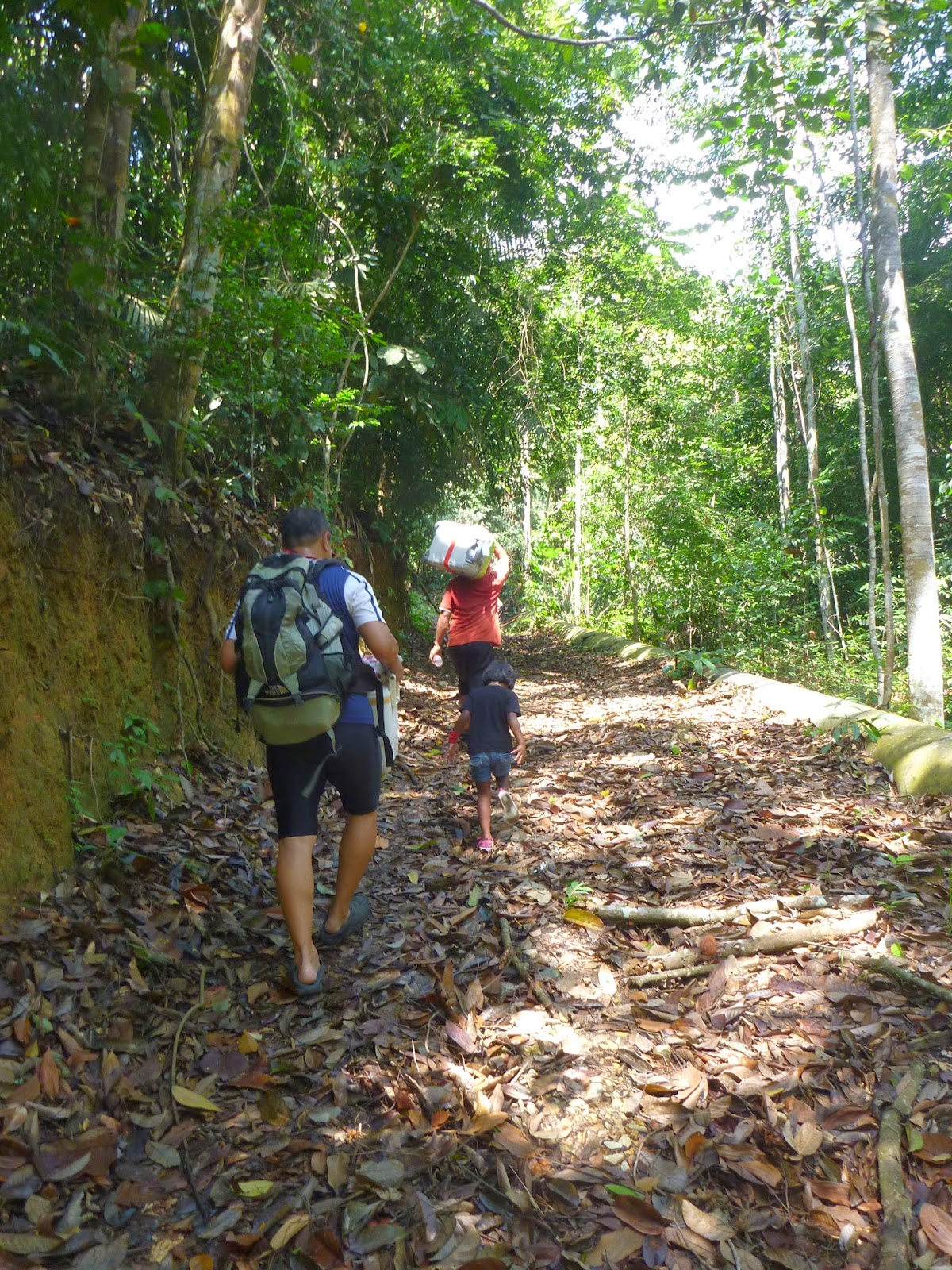 Still on the way up to the camp. I can't say that I minded much when our guide's friend took that suitcase from me. 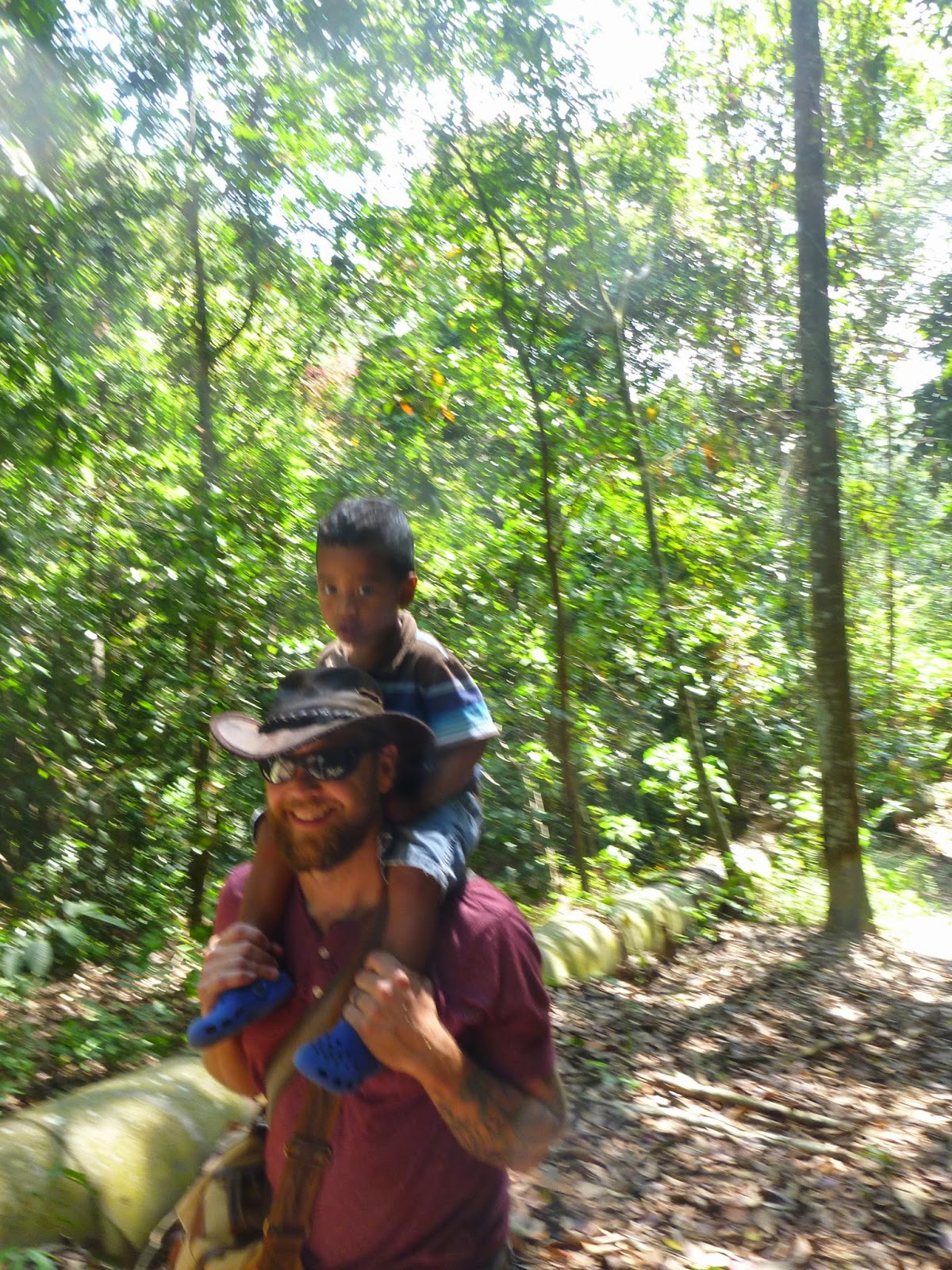 Fire got a lift to camp
﻿ 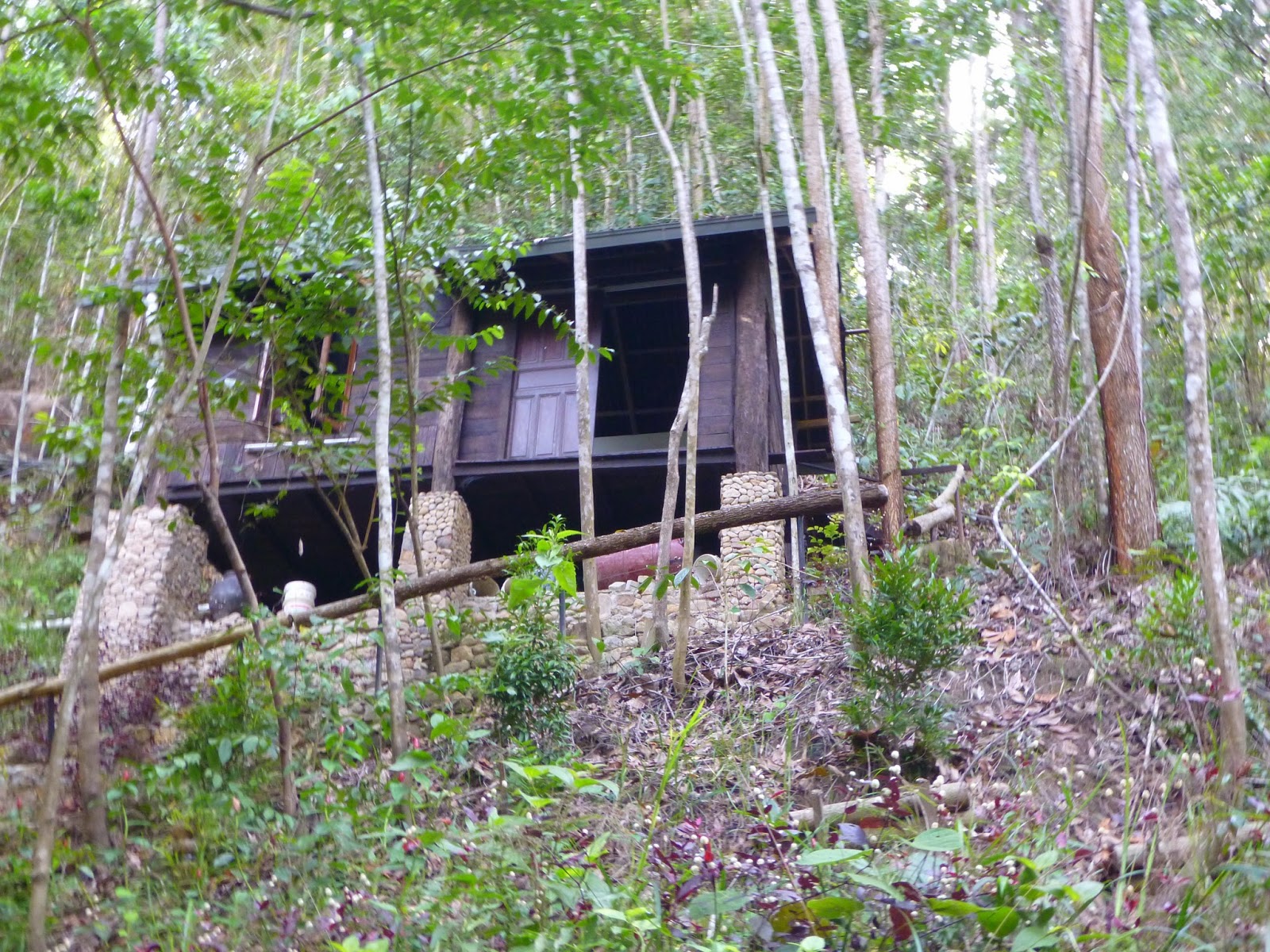 This building was where we stayed. We kept it open all the time to catch the breezes
﻿ 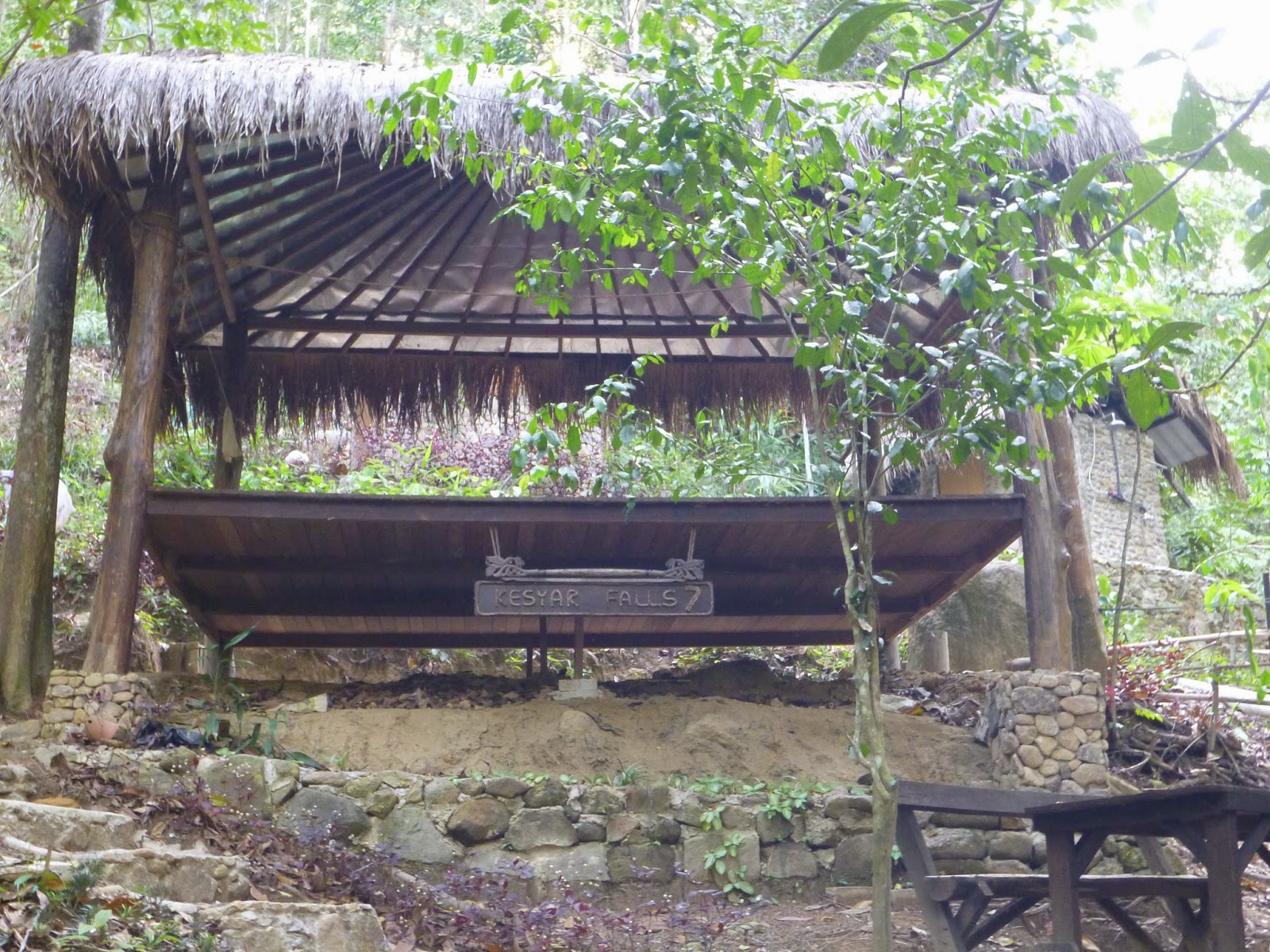 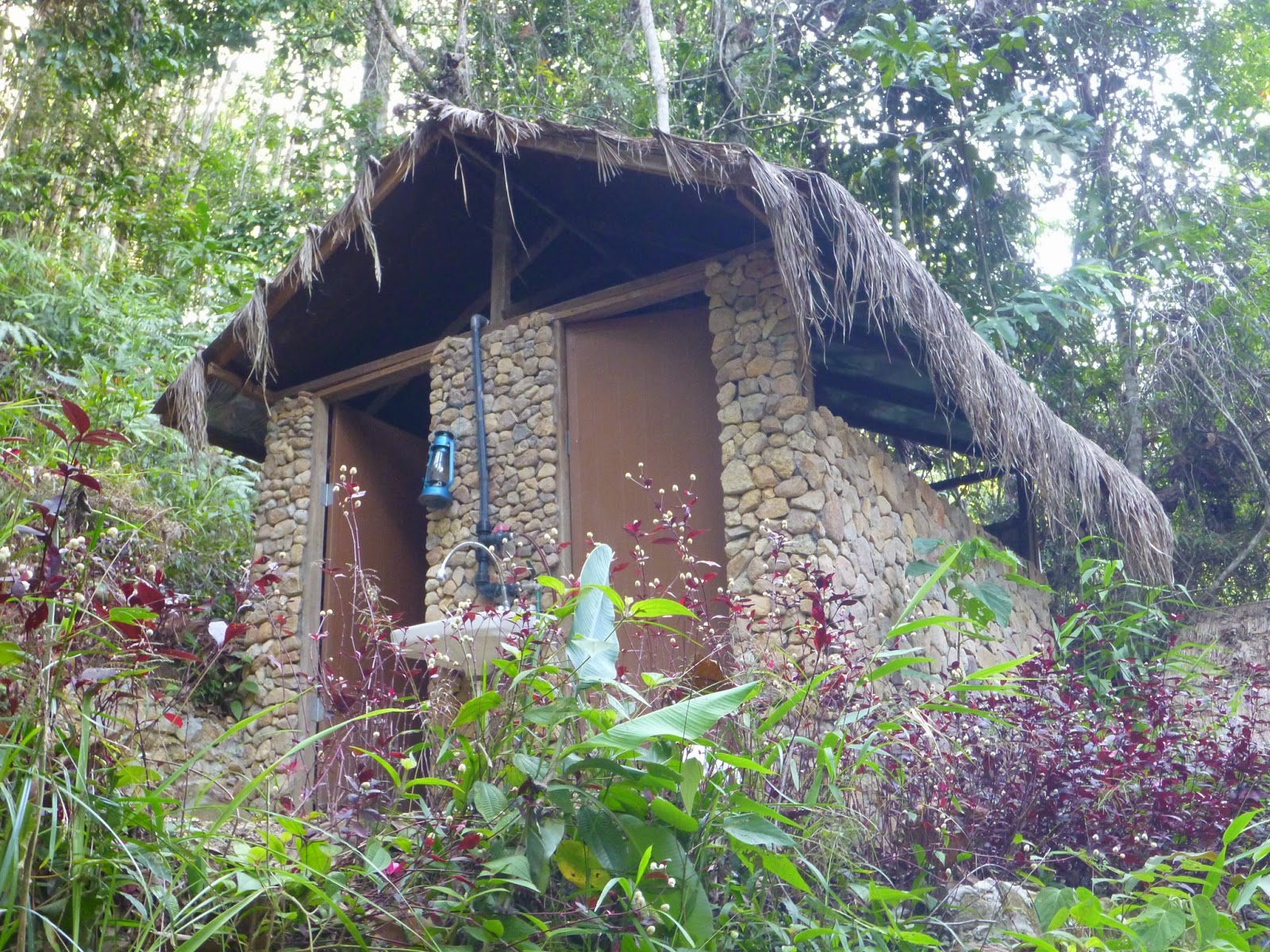 The bathrooms (toilet and shower inside, both run off the river nearby)
Playing in the river
﻿ 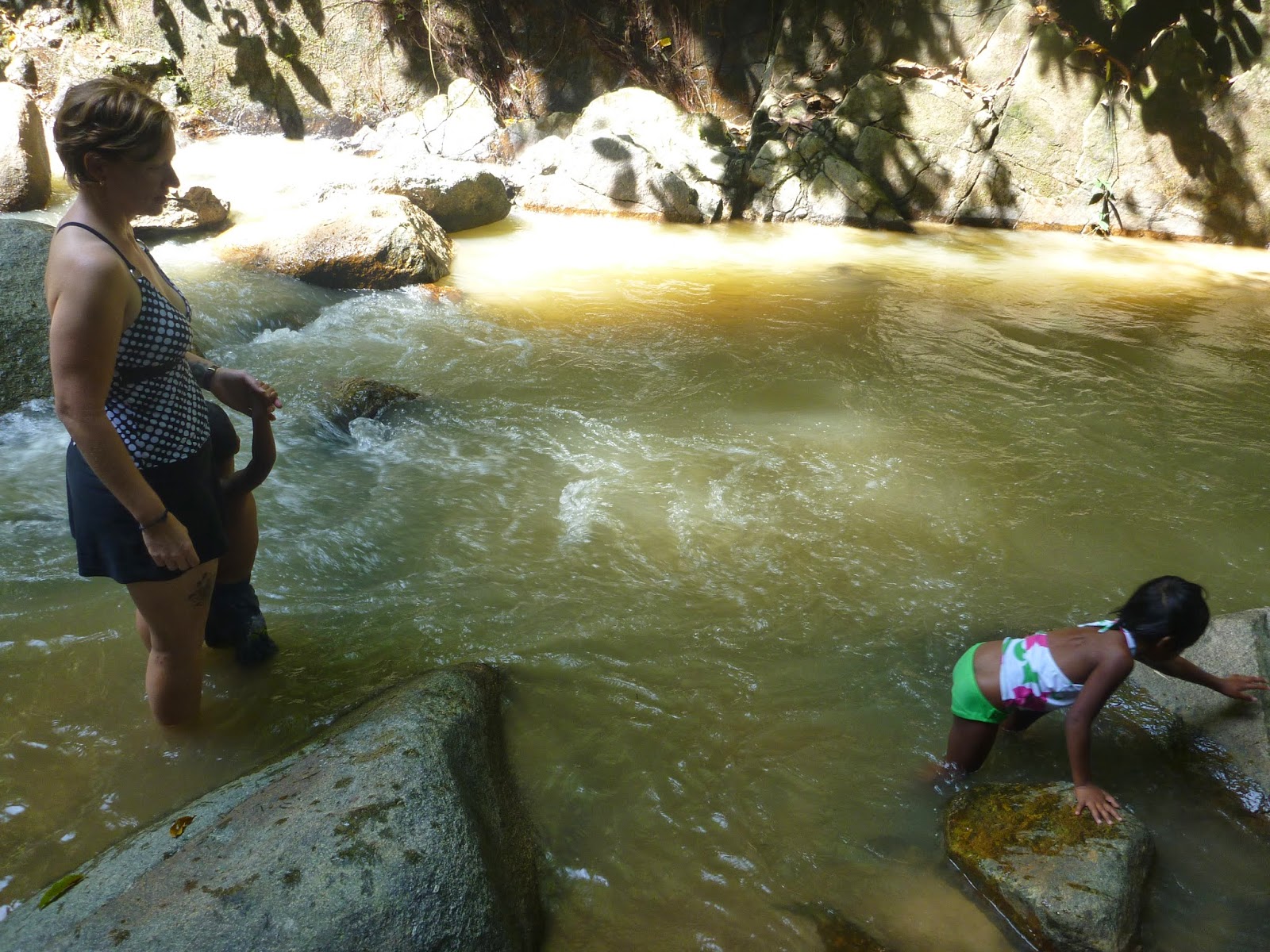 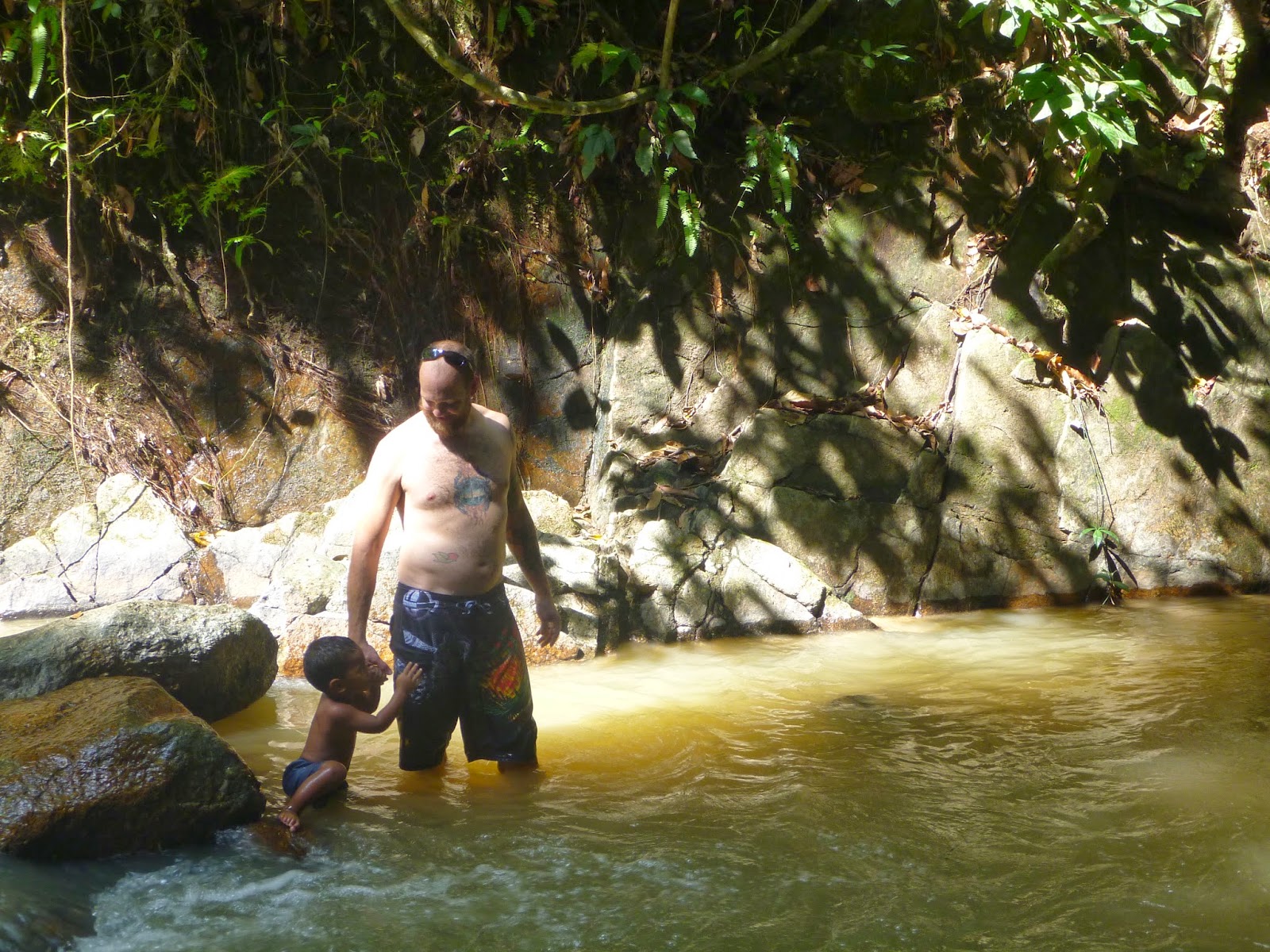 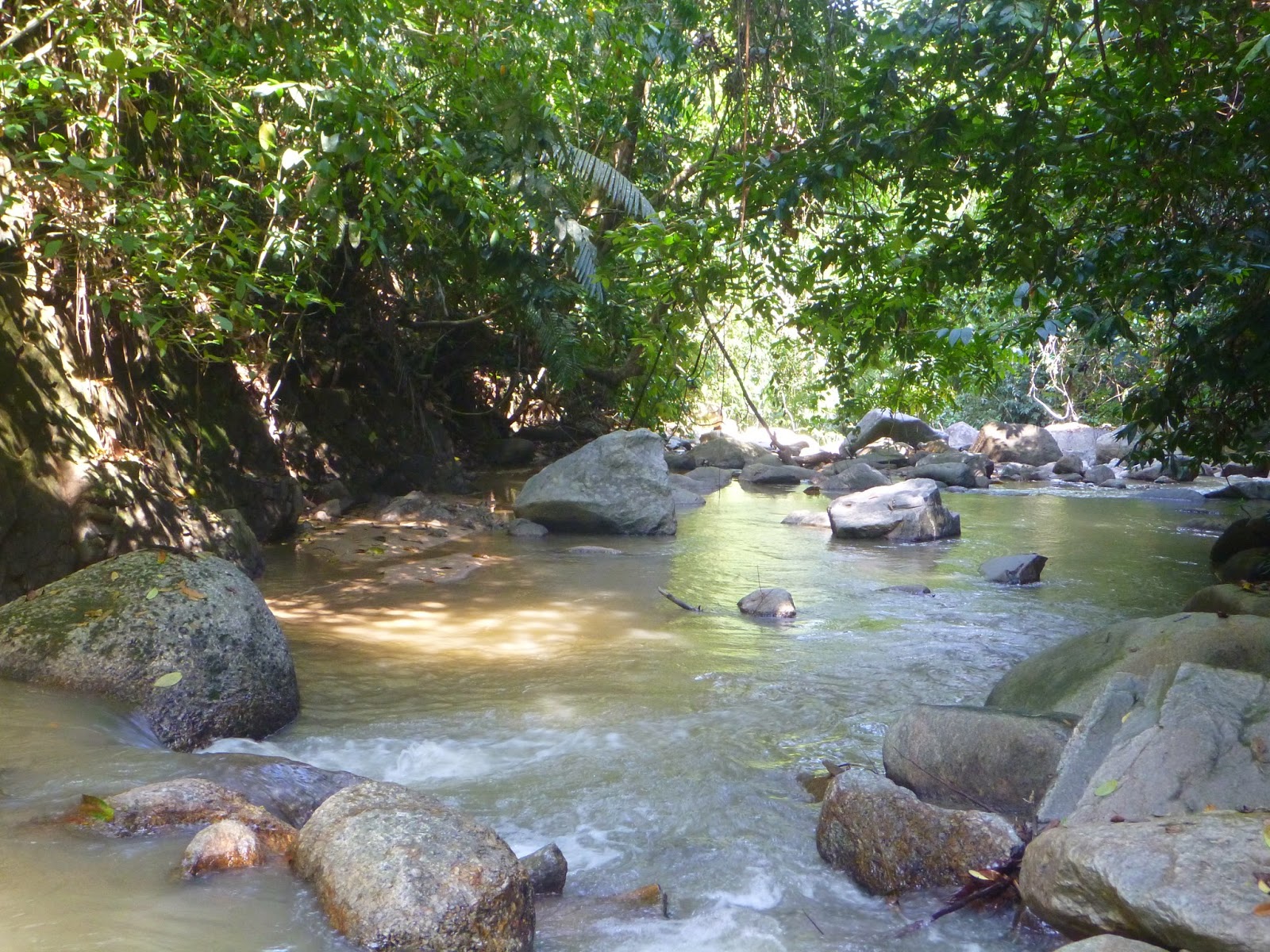 A little down-time before dinner
﻿ 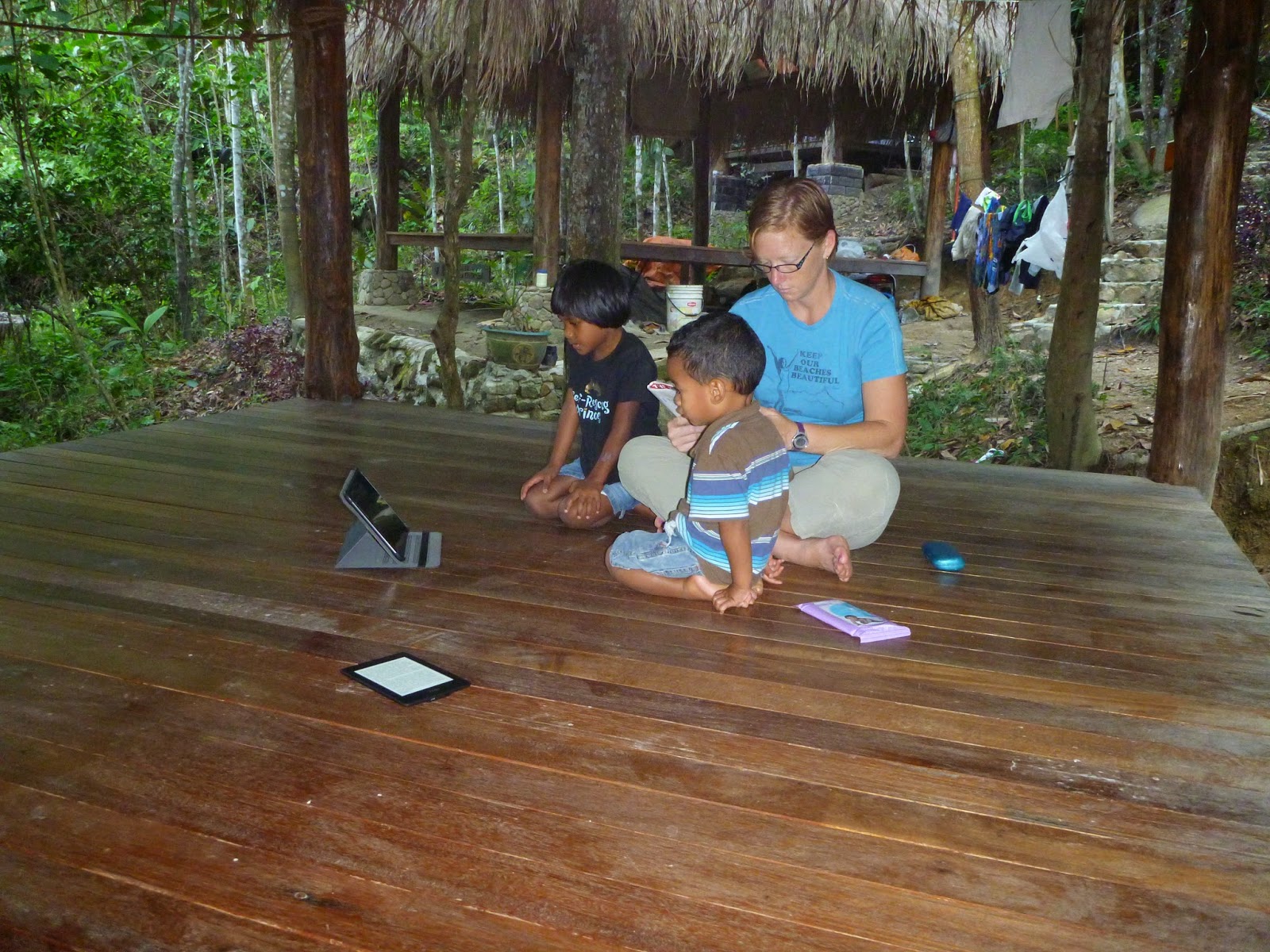 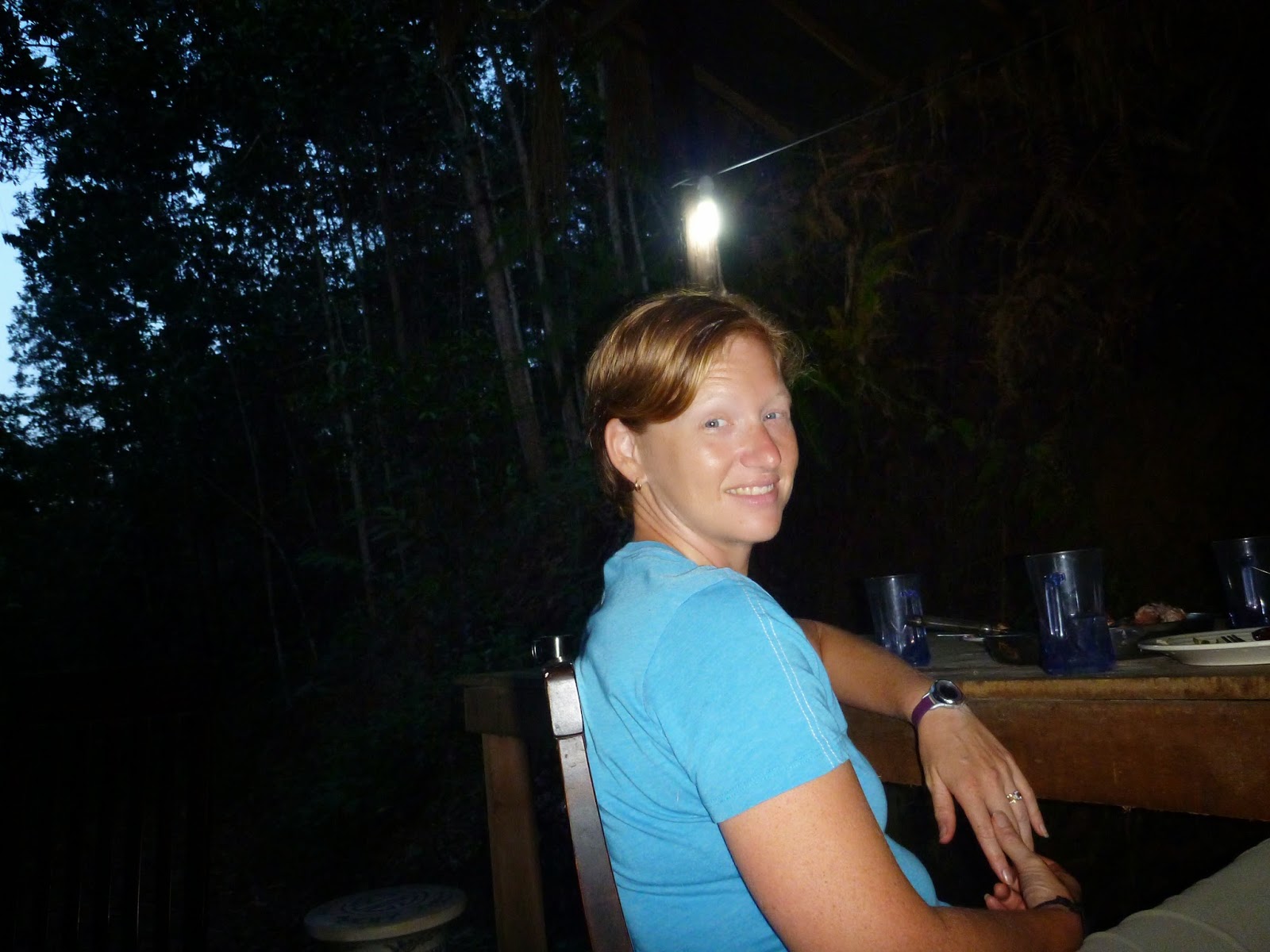 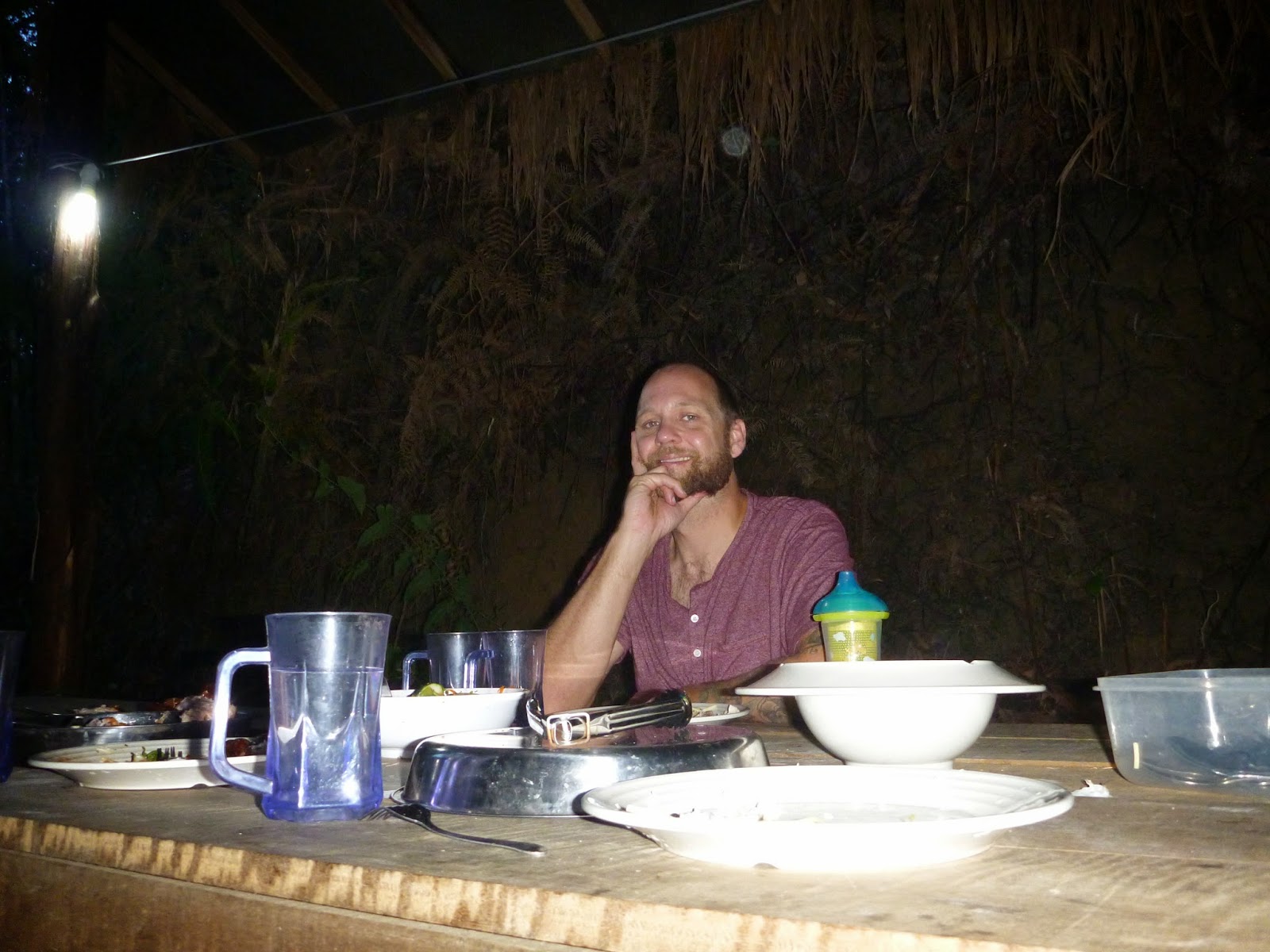 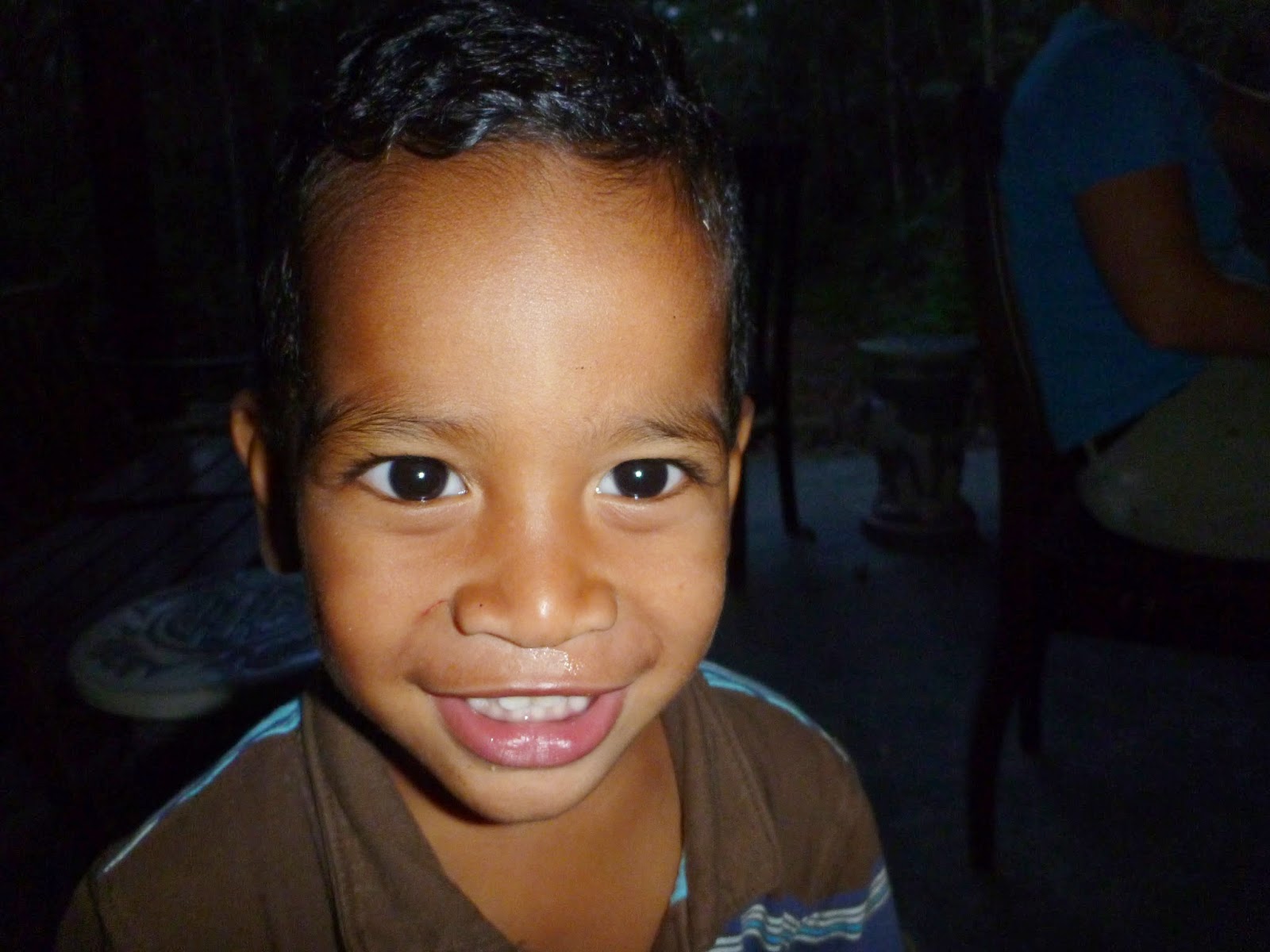 Our guide (Gary Phong with Kesyar Falls Junglestay ) picked us up at our hotel around 9am and we headed out of Kuala Lumpur. It took us about an hour and half to get there and once we parked, it was a 15 minute hike in to the camp. Sky was amazing about it- she just grabbed her princess umbrella and got walking. She was even walking ahead of Gary some of the time. Slippery, muddy, crossing a makeshift bridge over a rushing river? No worrying, no whining, just doing it. We told her over and over how proud we were of her.
The camp was really amazing. Gary put a lot of work into it and it shows. We stayed in the only real building there, which was still pretty open, with large doors and windows on three sides. The camp is built into a hill with our place at the top and three covered pavilions at different levels heading down towards the kitchen/community building. There were even enclosed bathrooms with showers and toilets, both "powered" by water piped in from the river.
After knocking off the leeches that found their way into our keen sandals (closed shoes for all next time!), we settled in to our "room", had lunch, and put the kids down for naps. We had originally planned to visit a fruit farm but the harvest had been a little early this year, so there wasn't any fruit to see at the farm any more. We were pretty hot and sweaty from the hike in so when Gary offered to take us down to the river for a swim, we jumped on it.
It was the perfect way to spend the afternoon. The water was cold but not too cold and rushing, but not so fast that it would sweep the kids away. At one point, I had D hold my hands and I just laid back in it- heaven! Fire loved dropping leaves into the little waterfalls between the rocks and watching them wash away and Sky just wanted to sit in them and feel the water run over her hands. Both kids liked jumping off of the rocks into the water (don't worry, we caught them as they jumped). It was so refreshing that none of us wanted to leave but eventually we all got prune-y and the kids lips started turning blue so we dried off and hiked back to camp.
We let the kids watch a movie before dinner and then again afterwards until bedtime. Both kids had a bit of hard time falling asleep but they went down eventually. I wanted to relax with a book but unfortunately the light from D's kindle kept drawing (huge) bugs so we called it an early night as well. Elephants tomorrow!
Labels: Family Malaysia