The Erawan Waterfalls and Elephant, Bamboo Raft and Train Rides

Next time we go to Thailand (yup, we loved it so much, we were talking about another trip before we left), we'll probably rent a car and do these trips on our own but with it being our first time there and with Sky being so young, it was just easier to jump onto a tour.  So we did.  Our second tour day was a full one.  The seven-waterfall hike at Erawan National park in the morning and after lunch, elephant rides, bamboo raft rides and train rides.
Sky wasn't too sure about the hiking part, at least not at first.  We'd promised her more swimming and she couldn't understand why we kept walking past all these waterfalls.  The plan was to hike up to number seven and then swim on the way back down but we didn't make it that far.  D carried Sky most of the way so we ended up stopping at waterfall number five to swim.  Well, D and Sky swam.  If you scan through the pictures below, you'll notice there aren't any of Amber swimming.  Now why is that?  Anyone in my family can tell you that I'm hyper-ticklish and all of these pools had nibbling fish in them.  I tried, I really really did, but I jumped and screamed every time on of them nibbled on me and I just couldn't do it.  It was too weird!  I kind of wish I'd braved the fish so that I could have slid down the the waterfall at number four like D did, but I suppose there's always next time.

After lunch we drove to the elephant park where we got to ride an elephant (actually, we were kind of herded onto them, but that's the nature of a tour, isn't it?).  Since there were three of us, we were on one of the bigger ones and man, were we high up!  It's was so much fun and Sky's eyes were so big the whole time!  Every few minutes she would look down, point and say "melmet!" in a surprised voice, like she couldn't believe it.  It was really really cute.  I love that we were able to do this for her, to give her this unique experience.  I wish we'd gotten a chance to spend more time with the elephants, to feed them and pet them but after our ride we were hustled down to the bamboo rafts for a ride down the river.  It was pretty and peaceful but was shorter than I would have liked.
From the elephant park we drove to the train station and rode on the train back to Kanchanaburi.  Sky had seen trains but never ridden on one and D and I both love riding trains so this was a fun for all of us.  The windows were open and Sky really like putting her head on the sill to feel the wind as we watched Thailand go by.
It was a busy day but a lot of fun.  Sky went to bed pretty quickly that night so we treated ourselves to a really nice dinner at the floating restaurant at our resort.  We had wonderful Thai food at a table overlooking the rushing river and had a chance to have some real conversations- it was just like being on a date!  What a good day! 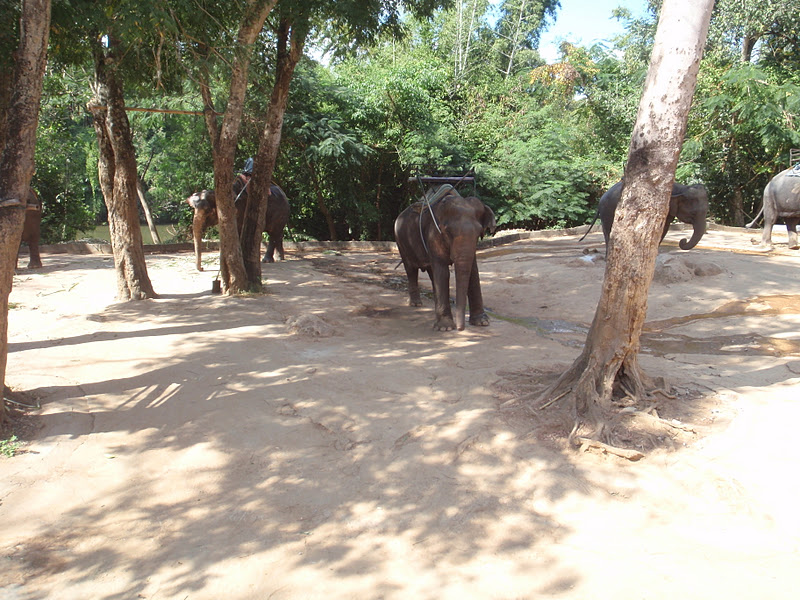 Us on an elephant:﻿ 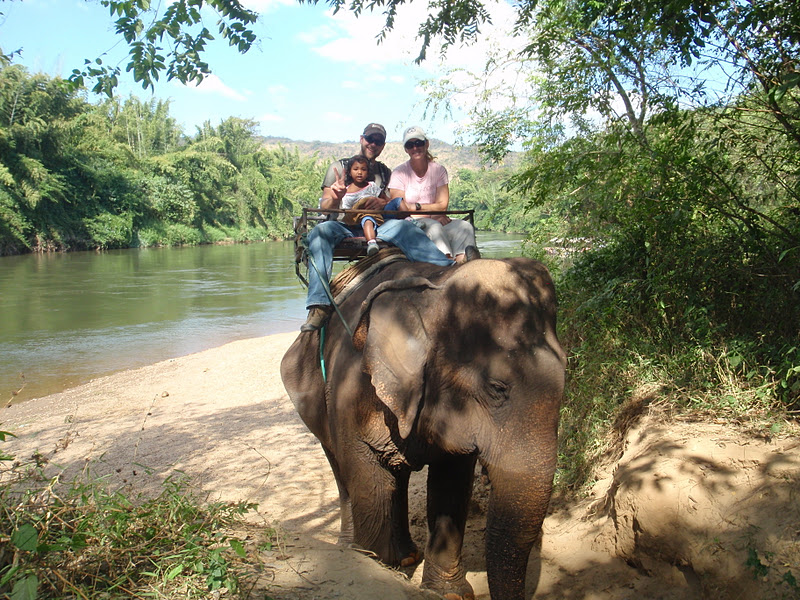 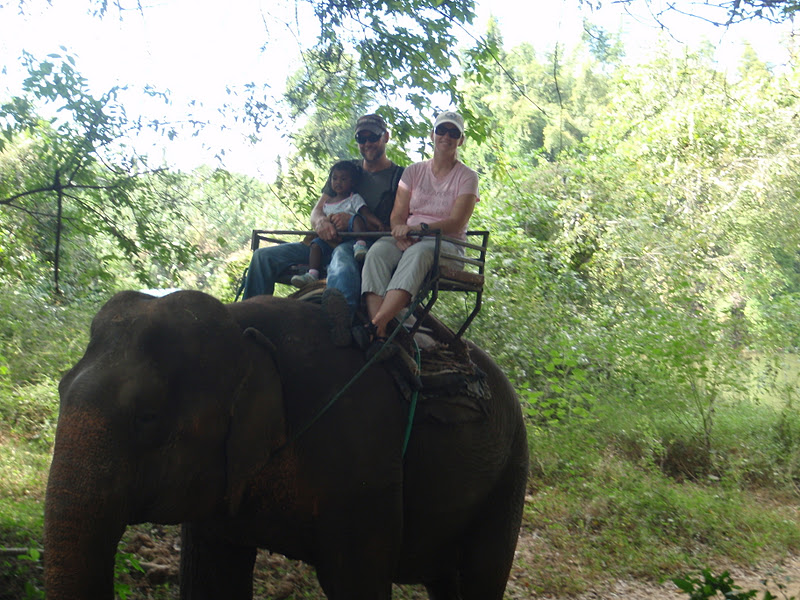 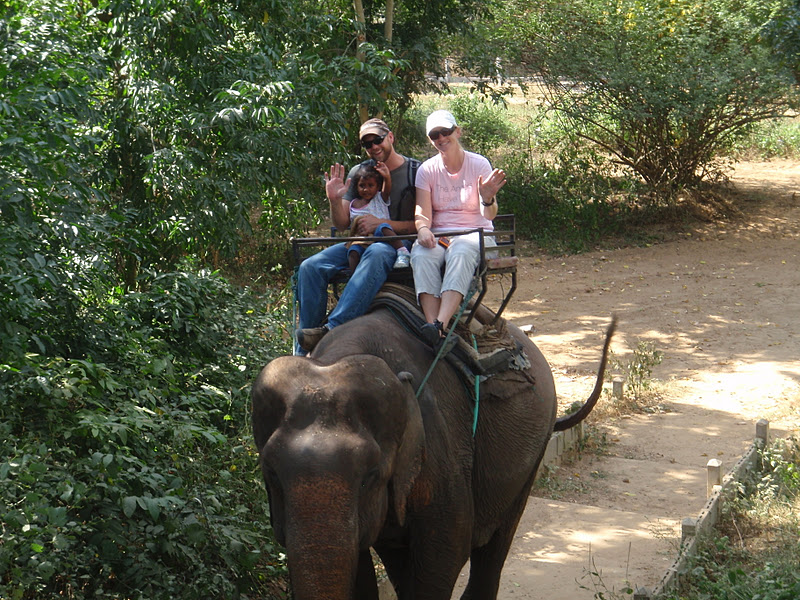 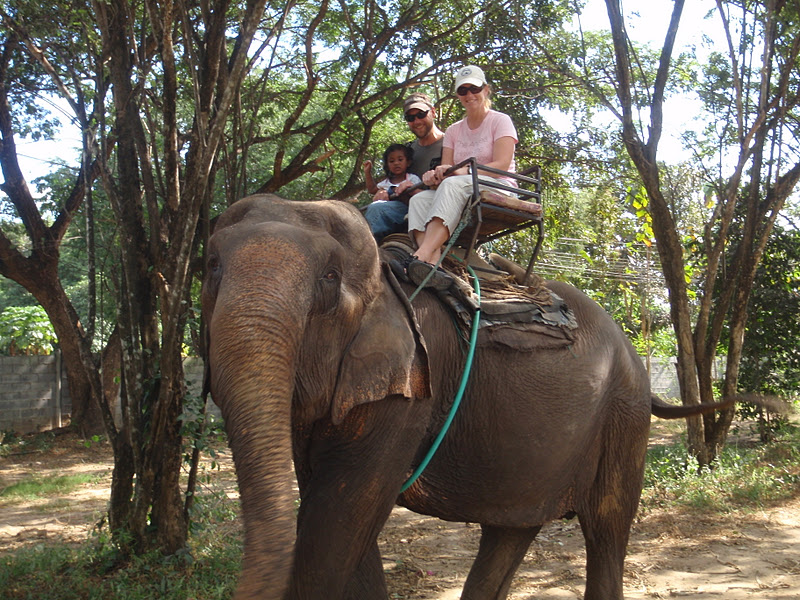 Us on the bamboo raft﻿ 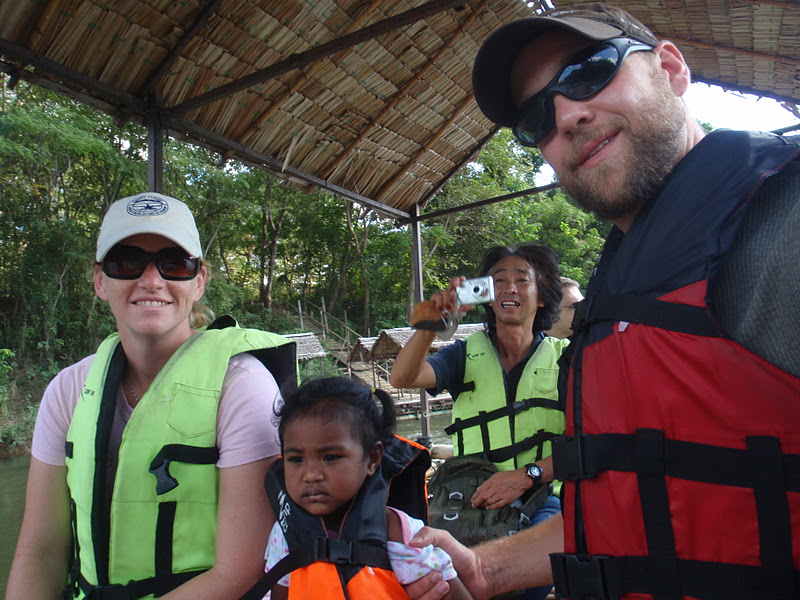 (D is holding onto Sky's lifevest to keep her from taking it off. Unlike the helmet battle, we won this one. 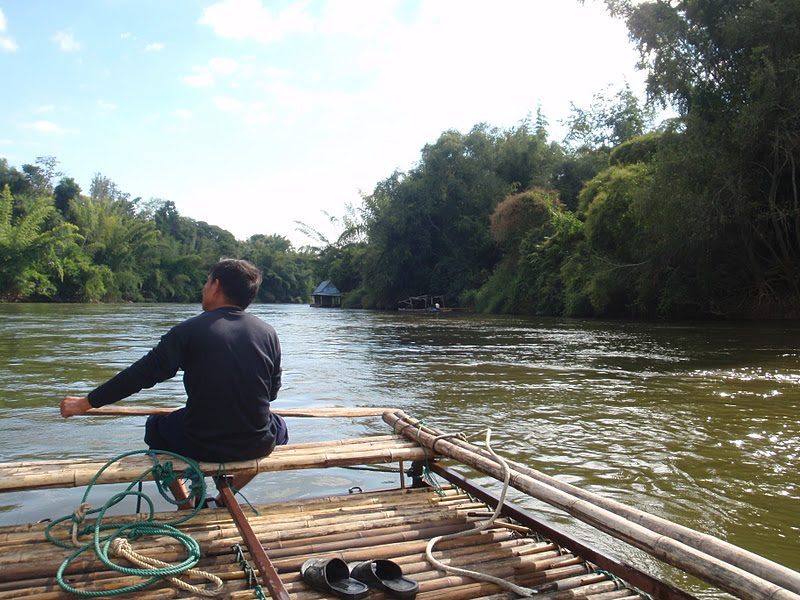 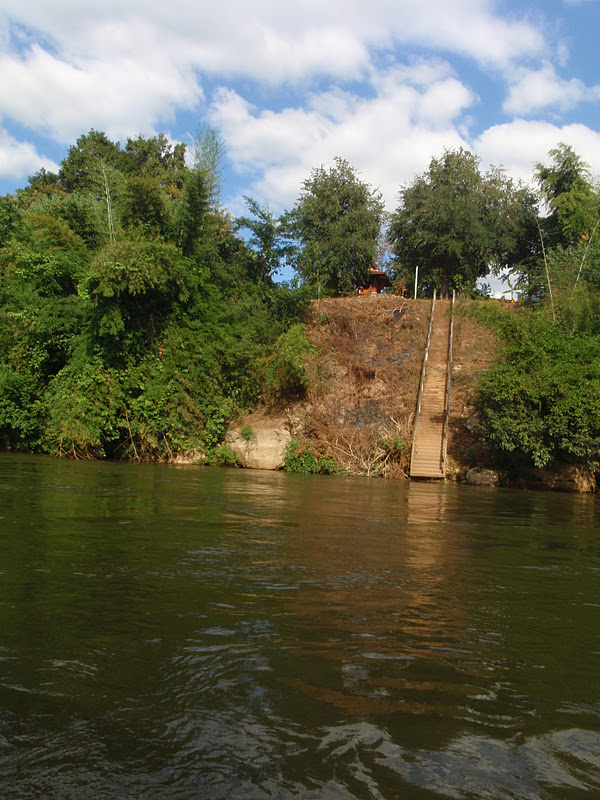 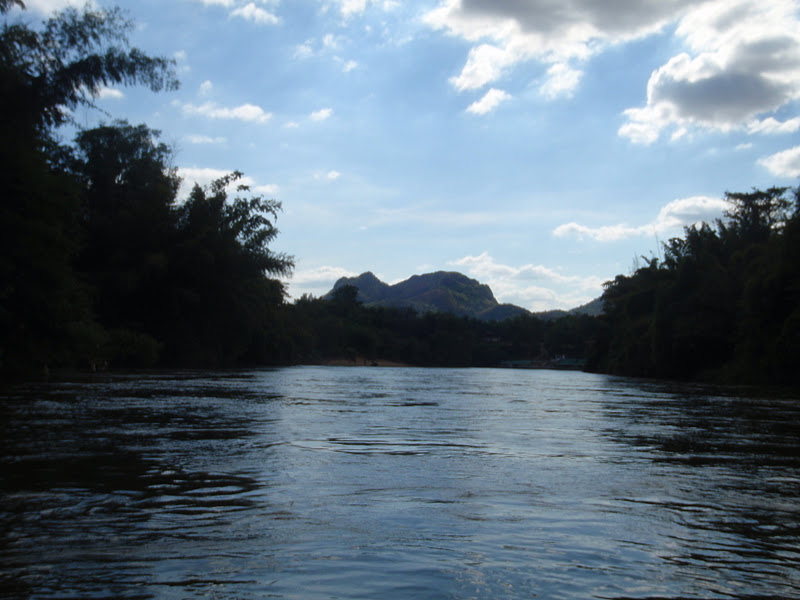 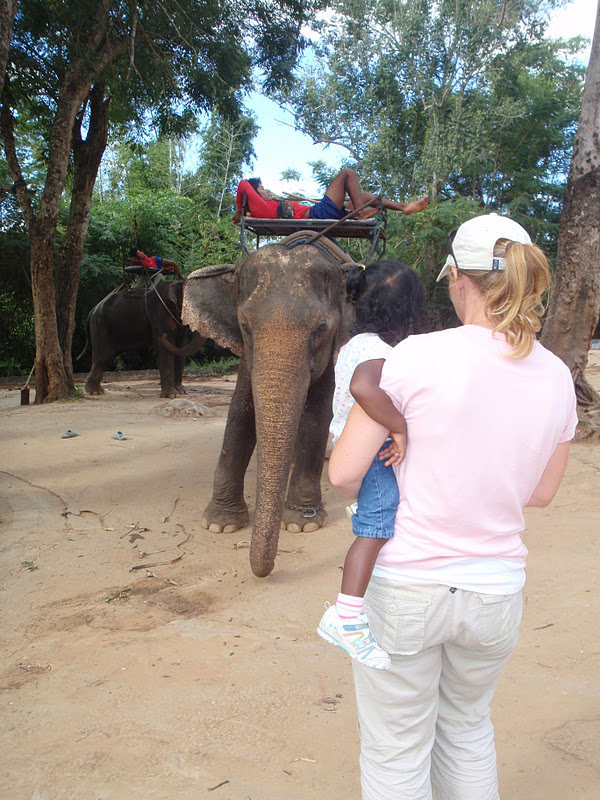 One more look at those elephants 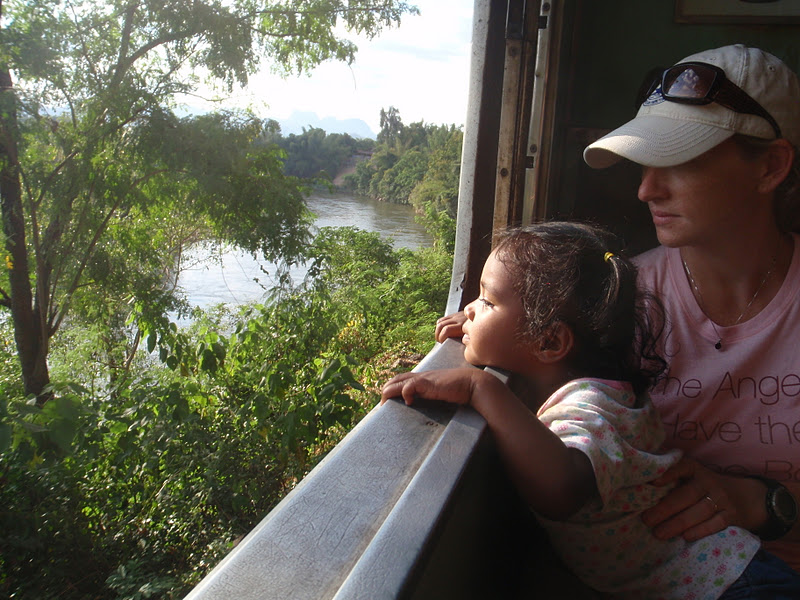 I love this picture! 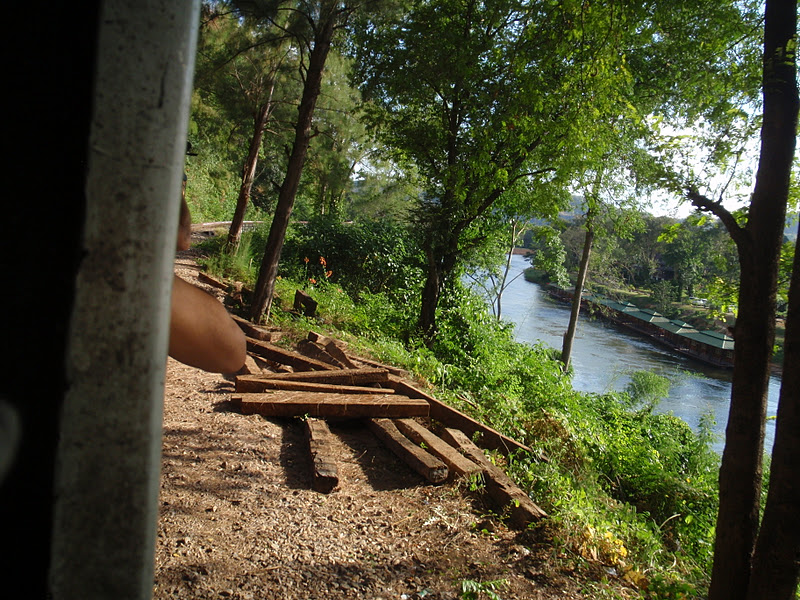 View from the train 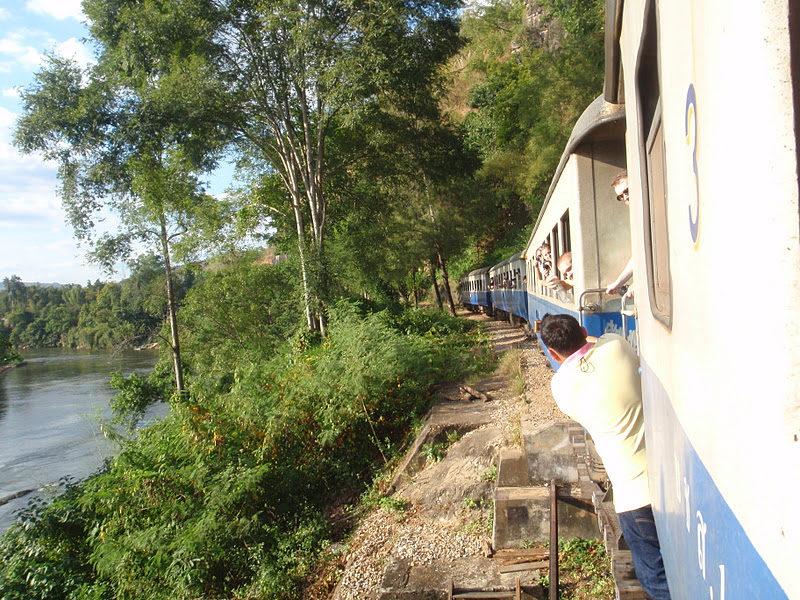 and a view of the train! 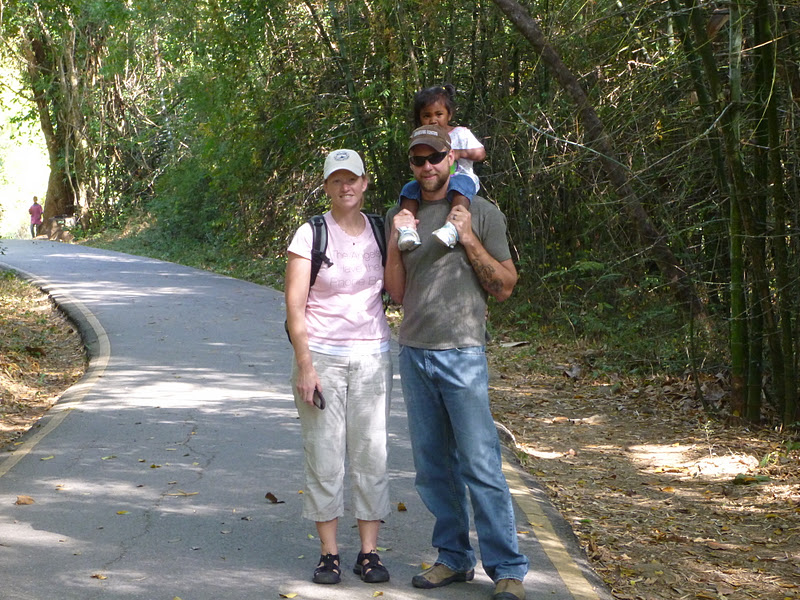 At the begining of our hike

Some of the seven waterfalls at Erawan Park: 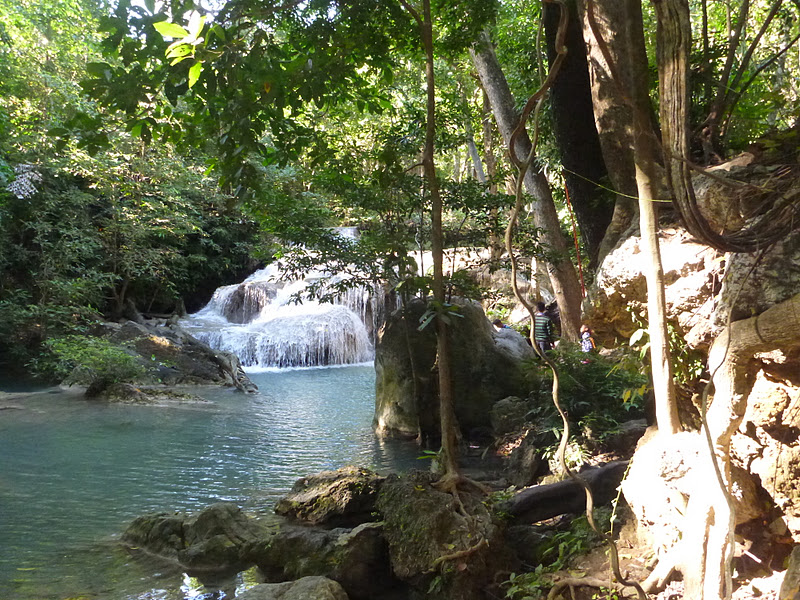 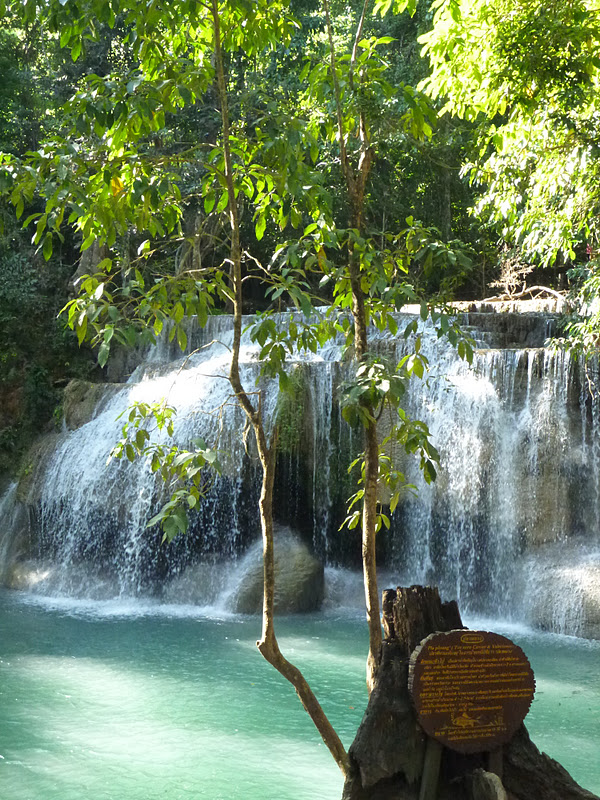 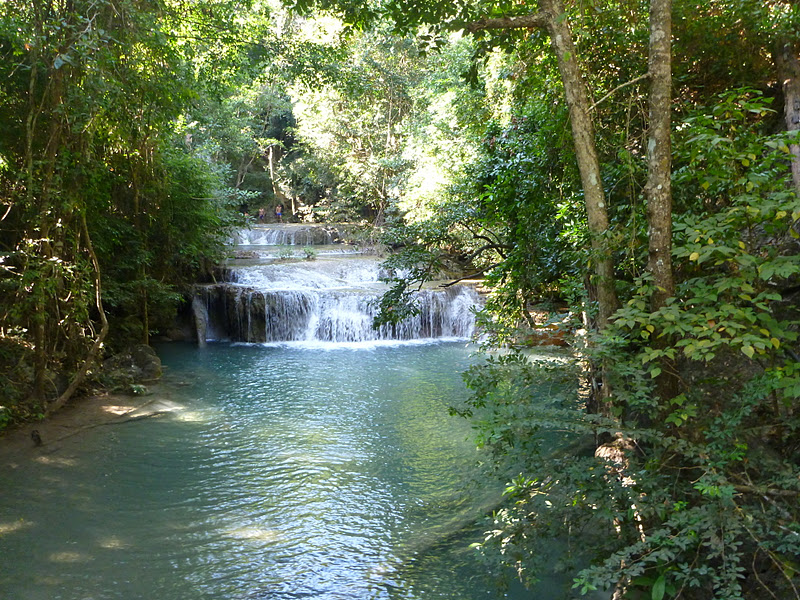 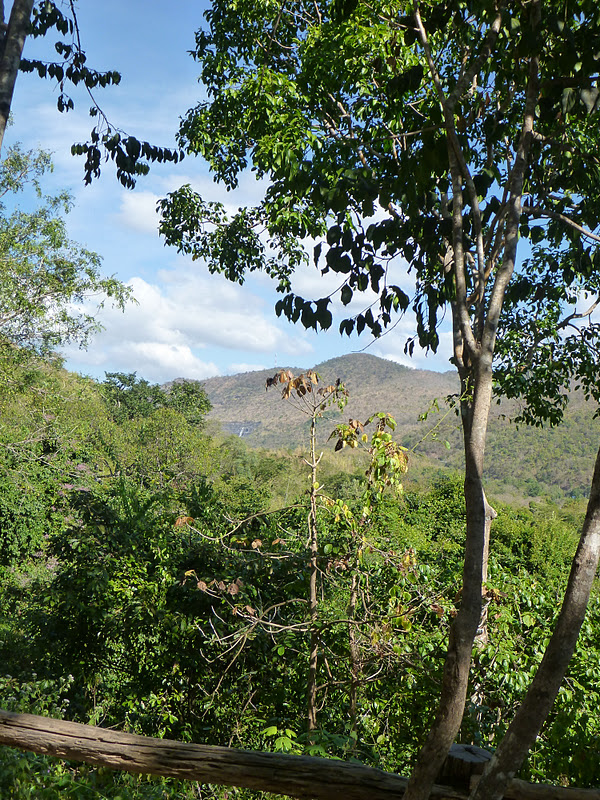 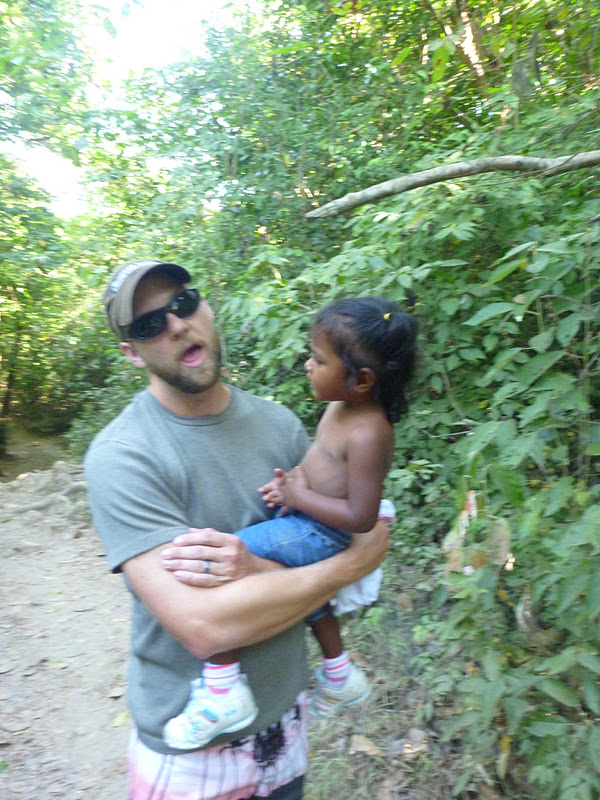 D tired from climbing those mountians while carrying Sky
(after we walked past yet another waterfall without swimming, Sky started saying "Pool" and taking her shirt off- that baby was ready to swim!) 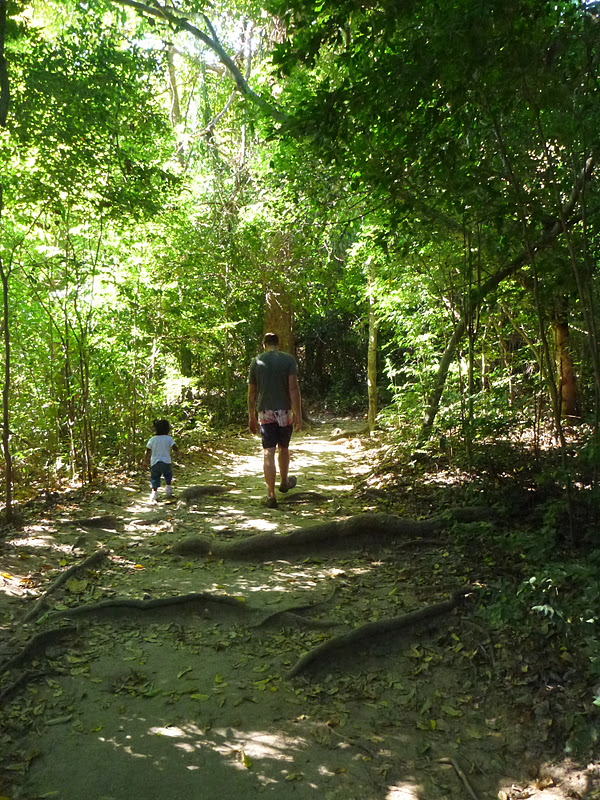 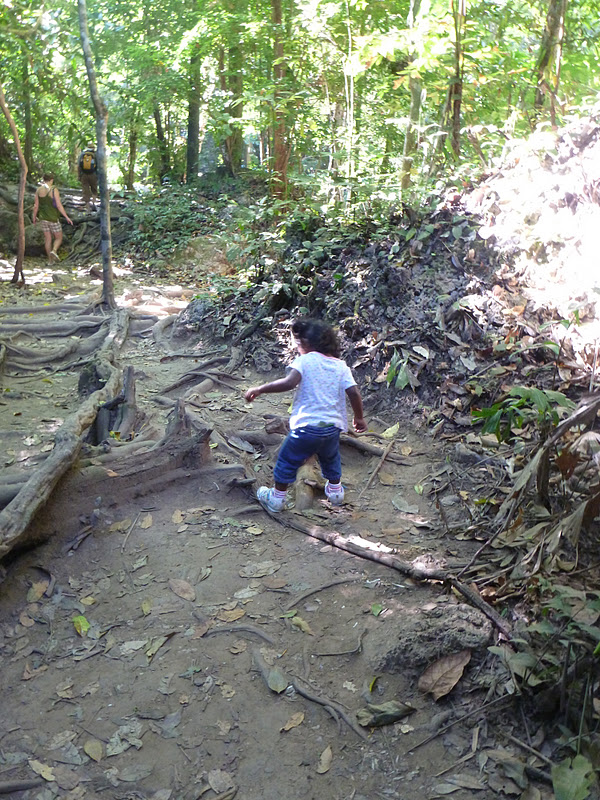 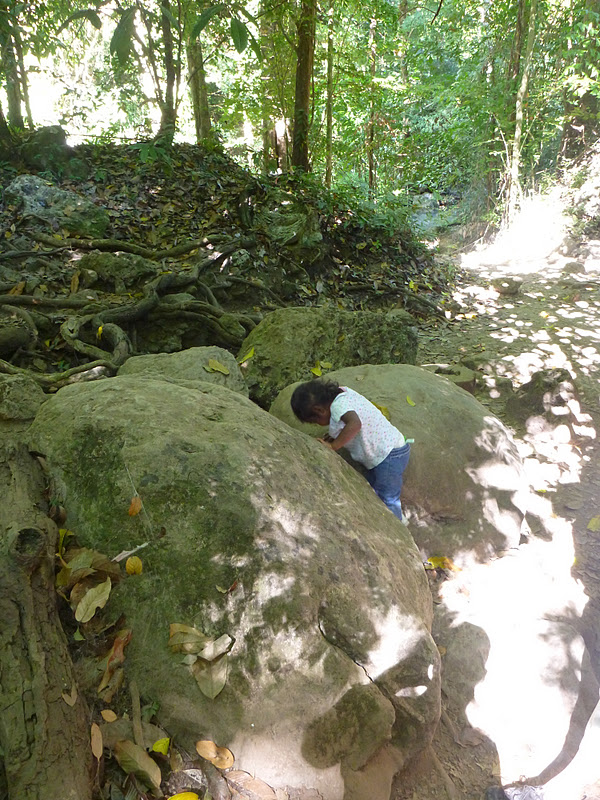 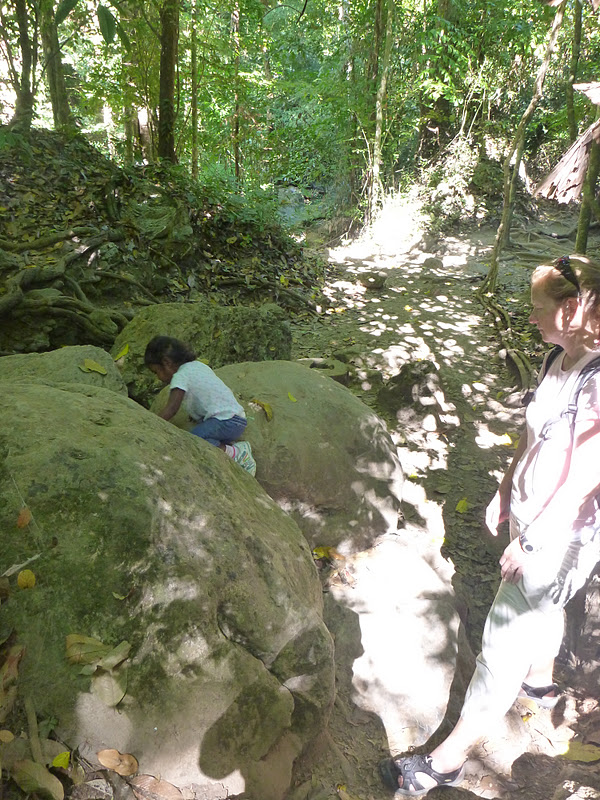 with Mama right there to catch her 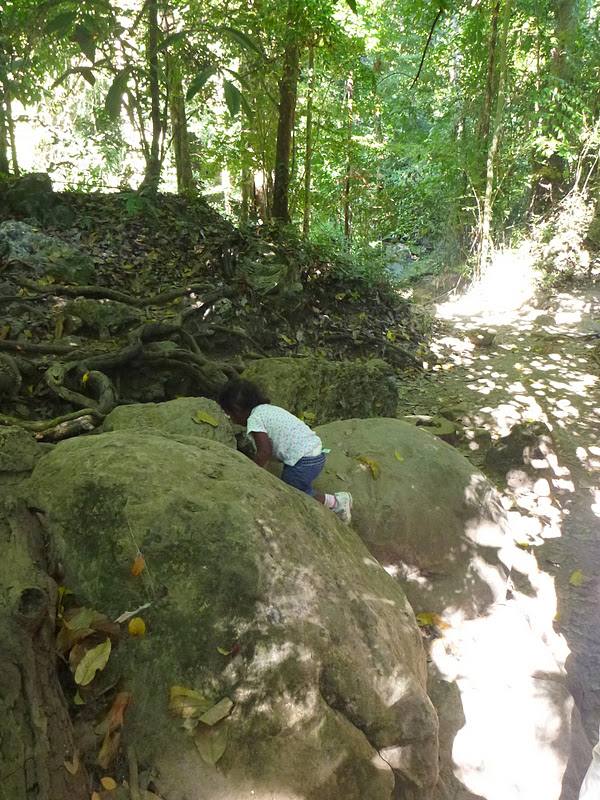 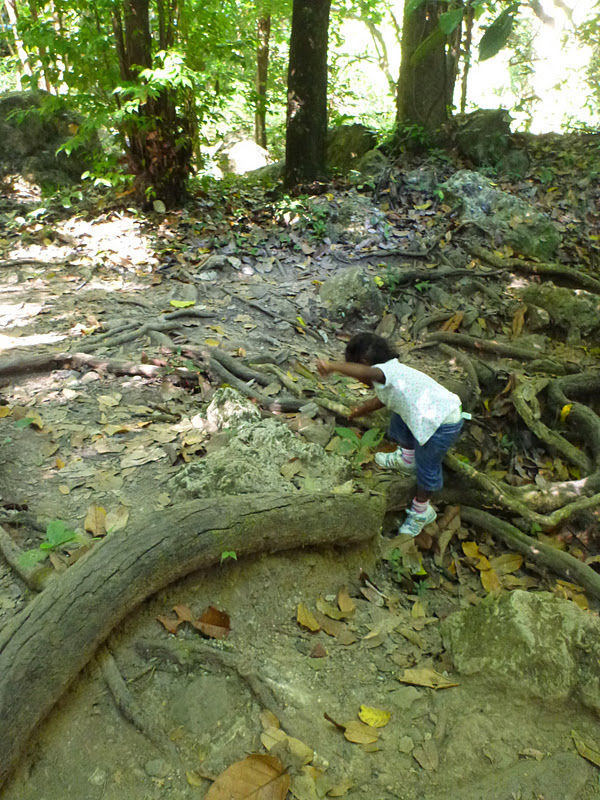 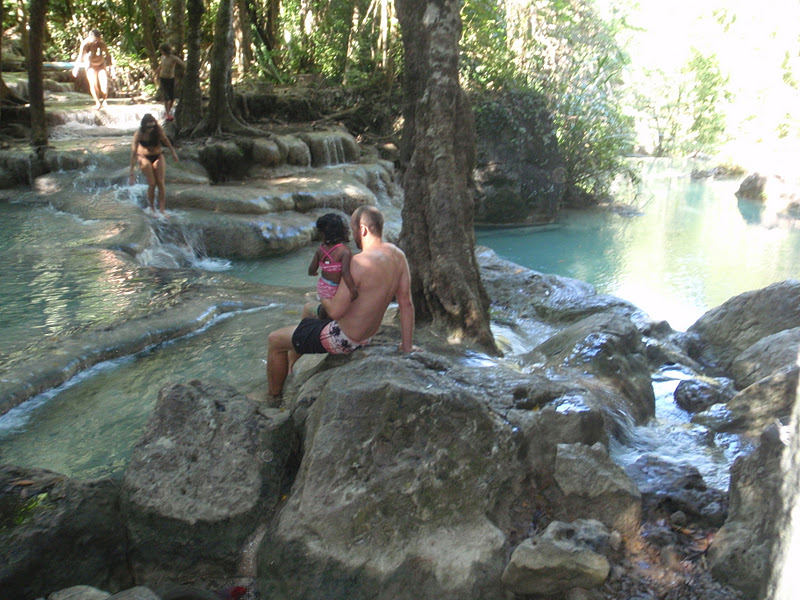 D and Sky getting ready to swim 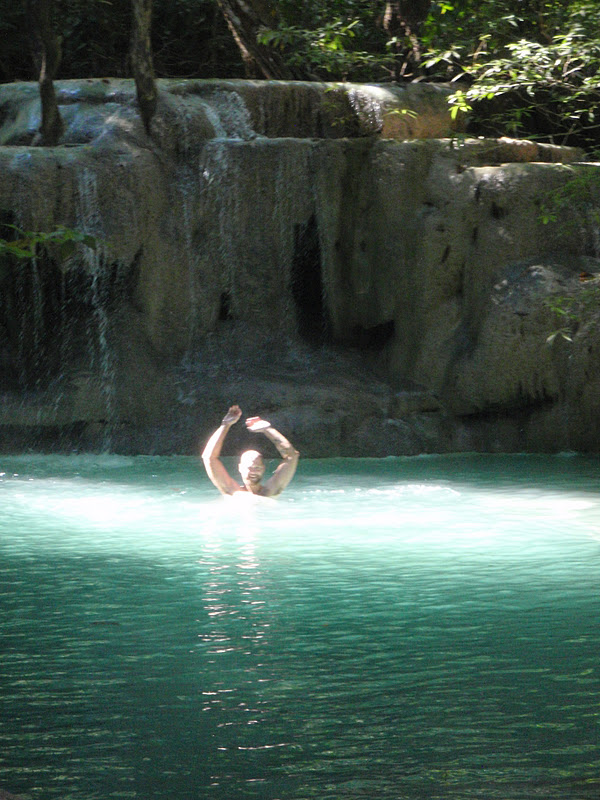 Swimming with the fishes 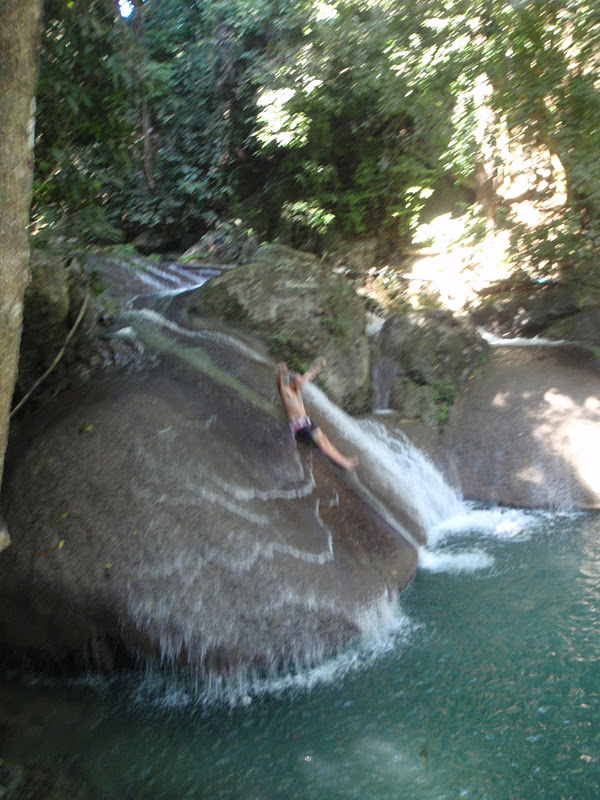