On our first real day in Kanchanaburi we went out on a tour to see some of the sights.  Our first stop was the Hellfire Pass Memorial and Museum.  It's built for and dedicated to the World War 2 POW's and conscripted workers that built the Thailand-Burma Railway in 1944, and died doing it.  I had read about Japanese attitudes towards POWs in Unbroken  but to actually see what these men were made to do was striking.  It's good to have these kinds of reminders about the awful things that happened so recently in the past (both my grandfathers fought in WWII) so that we can try to prevent them from happening again.
After the museum we stopped at Sai Yok waterfall before heading to the Tiger Temple.  If you haven't heard of it before, the temple gets a mention in this month's National Geographic magazine.  It's a fairly controversial place.  Tigers are bred there and raised by hand by the monks and staff and then used to raise money for the temple.  I have to say, the whole thing was very tourist-y.  At no point were told a mission statement or philosophy regarding the tigers, told any other reason for them having the tigers, directed to the temple or encouraged to speak with anyone regarding the religious life of the temple.  And for the amount of money that the tickets cost (1200 baht, almost $40!) and the number of tourists that go through there, the whole place seemed pretty run down.
The tigers were amazing though.  They were all obviously well fed and kept well excercised and all were very tame.  Because they're raised by hand and have imprinted on humans they don't mind us touching them, and becuase the temple wisely does it's tiger show in the heat of the day, they are very drowsy and sleepy when the tourists see them.  I've never been that close to a big cat and let me tell you, they are BIG.  They're very impressive animals and it was never far from my mind what they could do to us if they chose.  But of course, we got our pictures taken petting and walking them!   Sky wasn't too sure about them but kept pointing and saying "kitty cat". 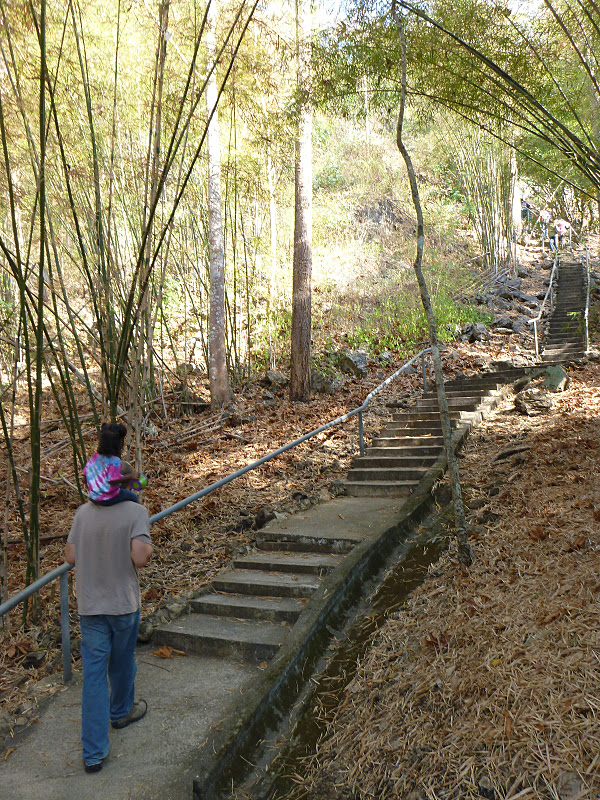 D and Sky walking to the railway cut 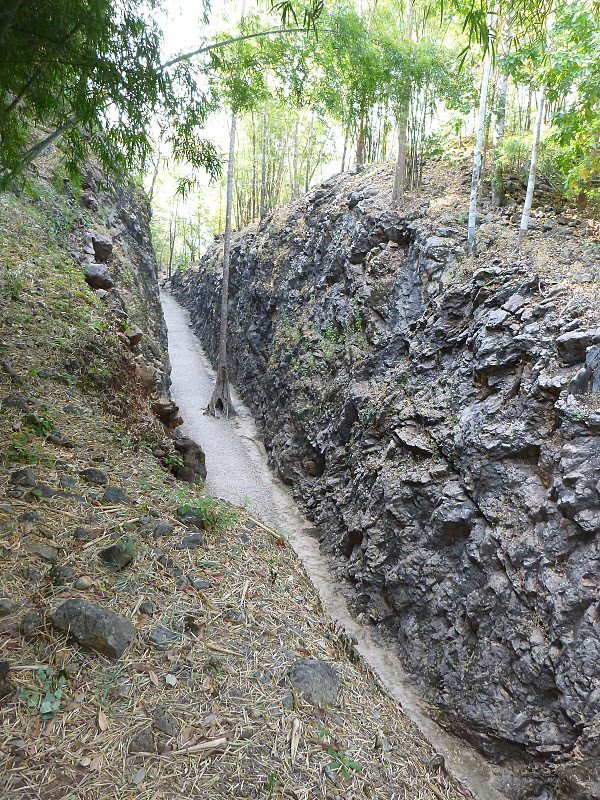 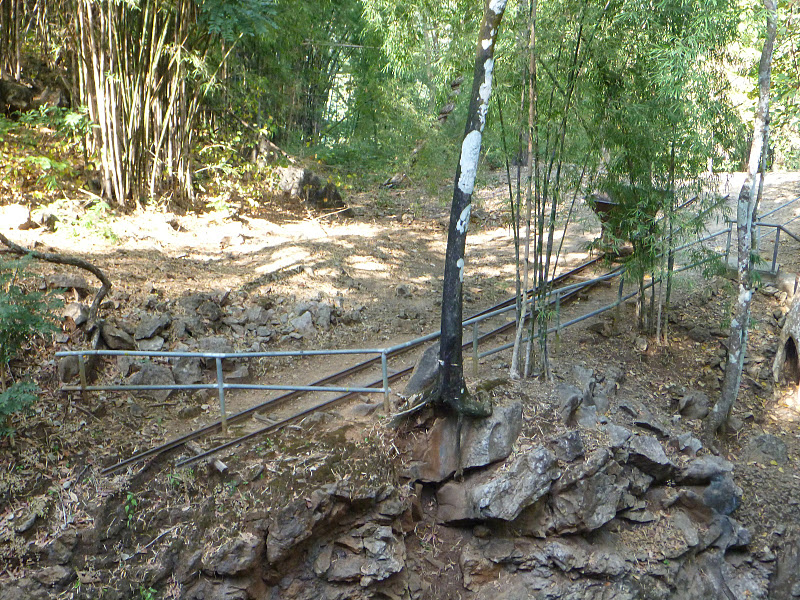 Some of the original tracks 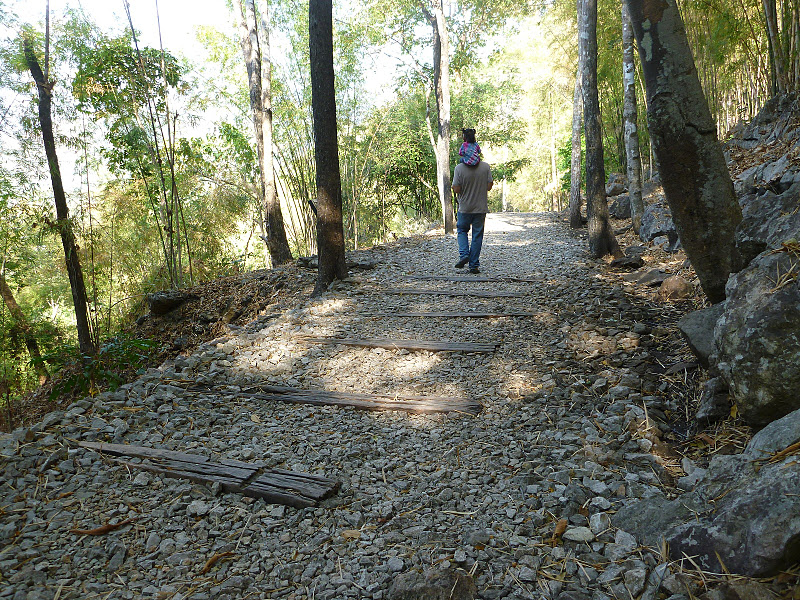 Some of the original ties are still there 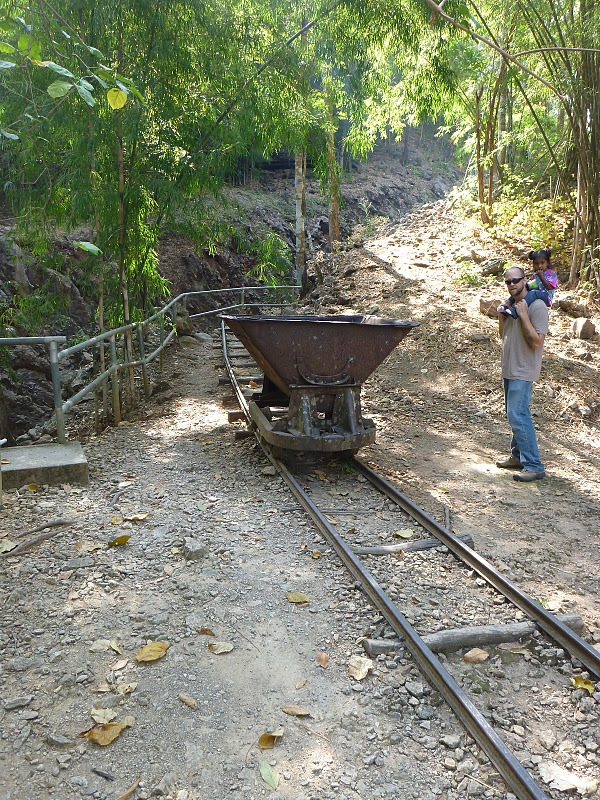 A load car used on the railway 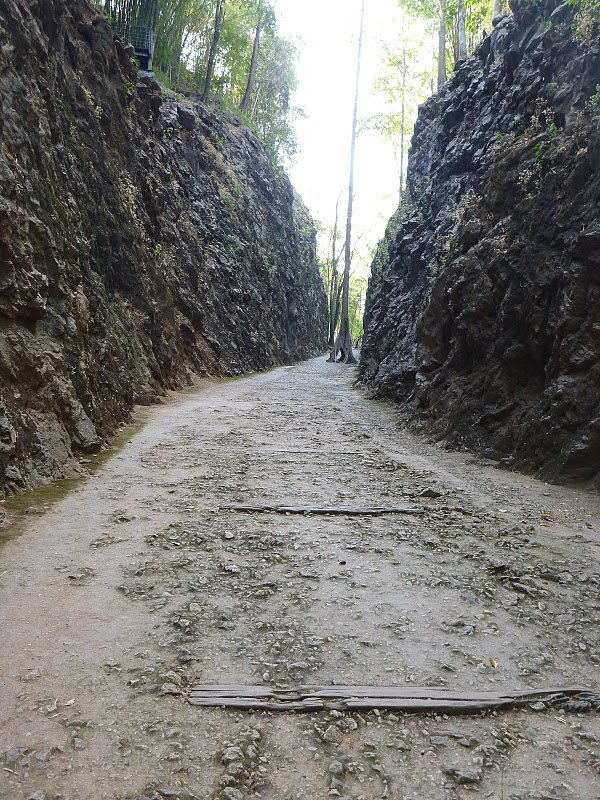 A view inside the cut.  The workers would dig the holes by hand, one person hammering and another turning the chisel.   When the hole was deep enough, they used explosives to blow away the rock, which was then carried away by hand and whole process started again.  This pass is aobut two stories deep and there were dozens of cuts like this one on the railroad. 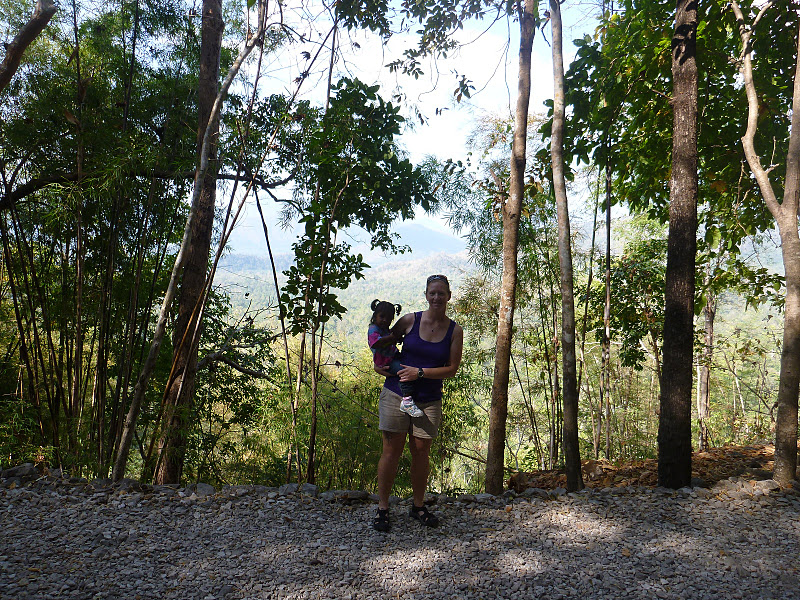 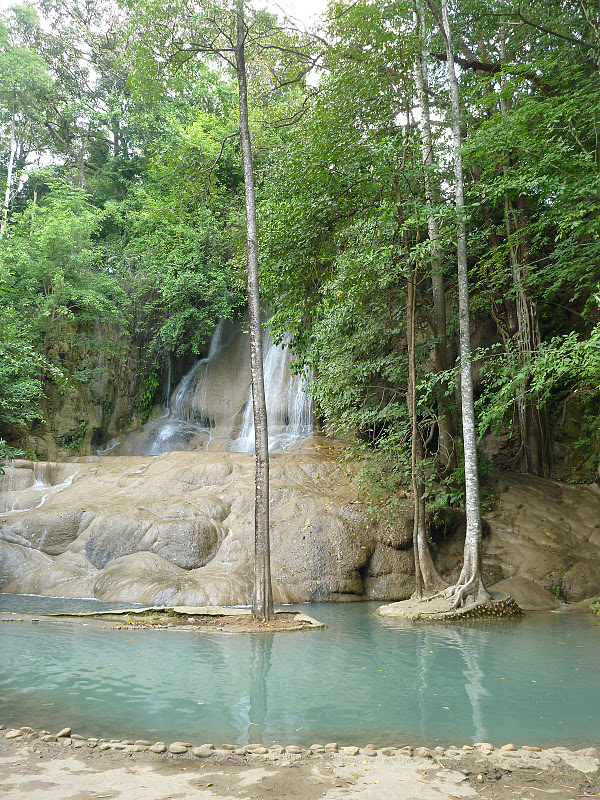 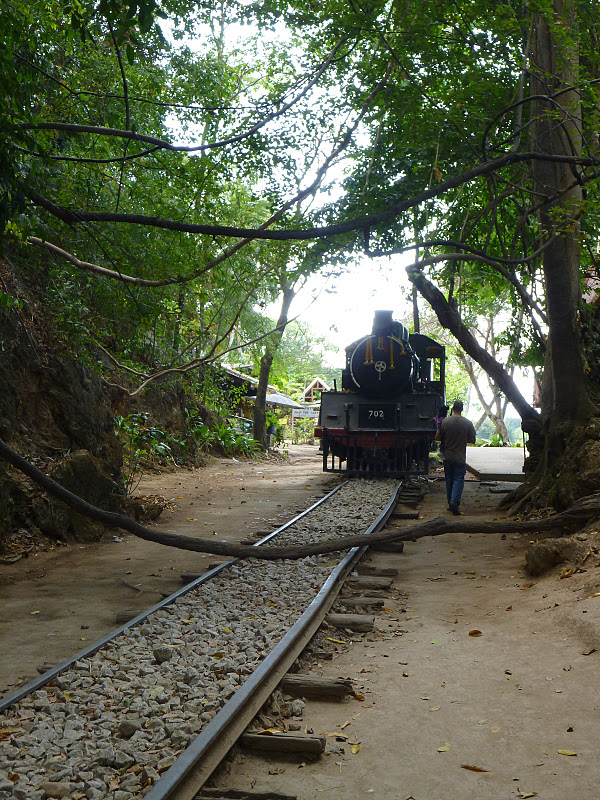 An engine used on the Thailand-Burma Rairoad 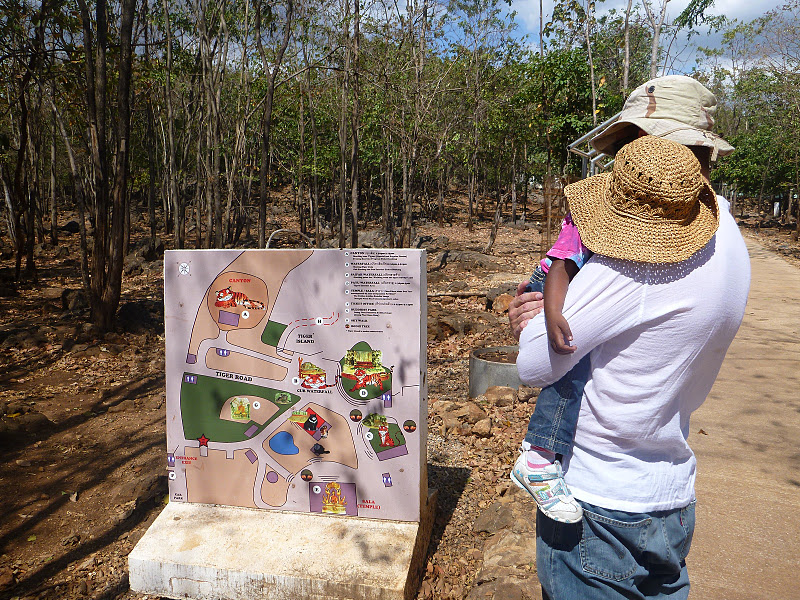 Sky is unimpressed by the tiger temple so far 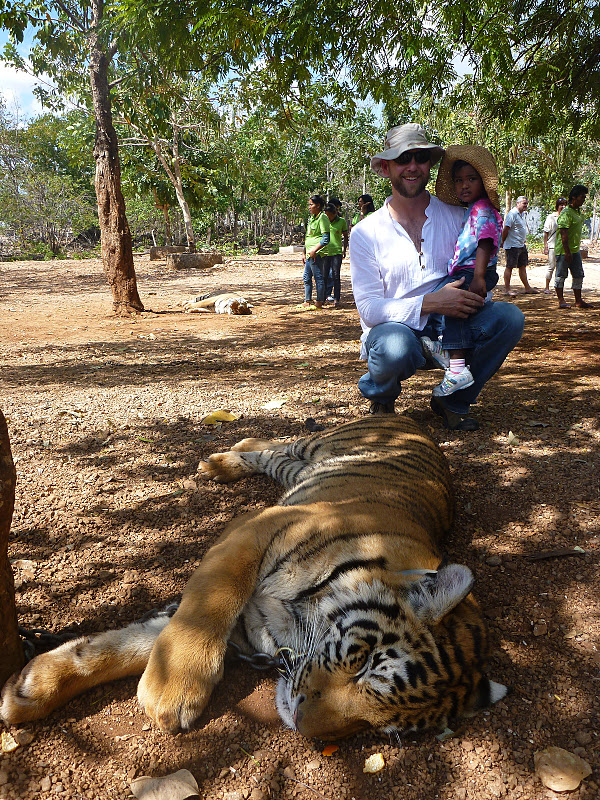 There we go, that's better!
Actually, D woke her up from her nap right next to the tiger and she still wasn't very impressed! 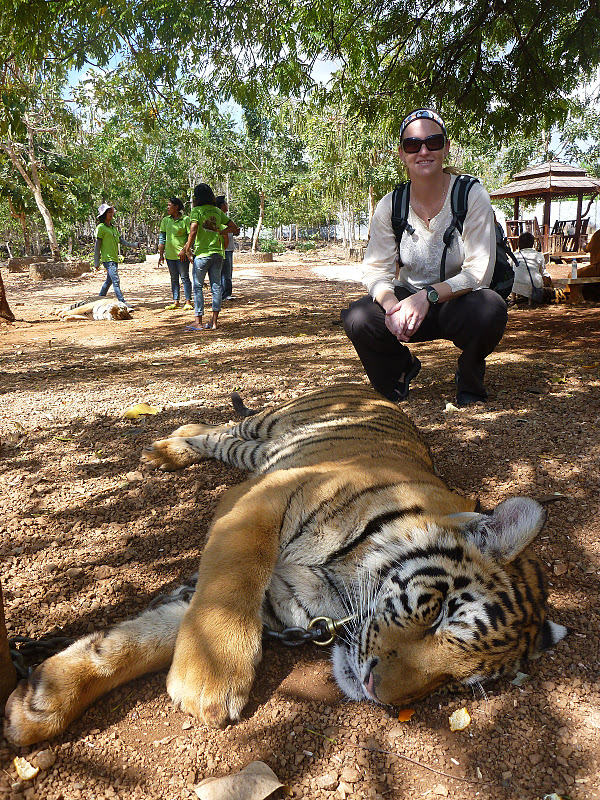 Amber with the tiger 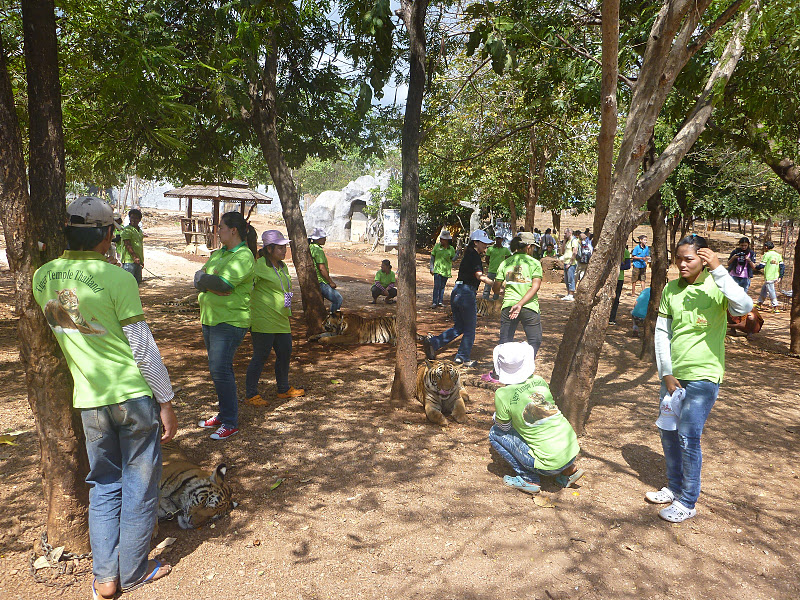 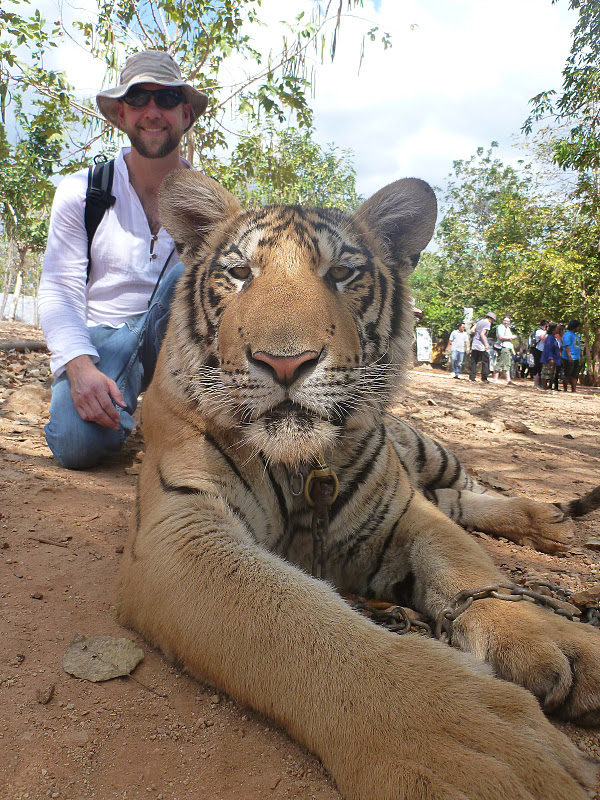 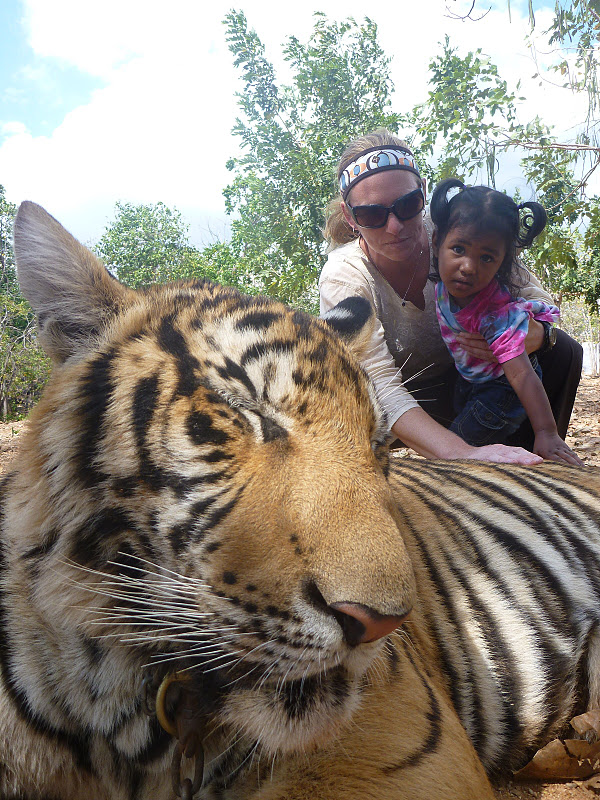 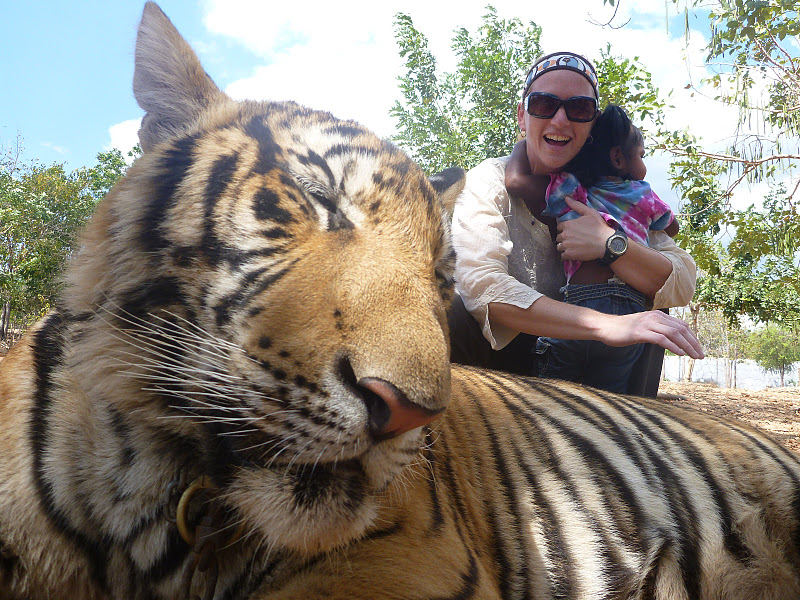 Sky was okay with it until the tiger moved 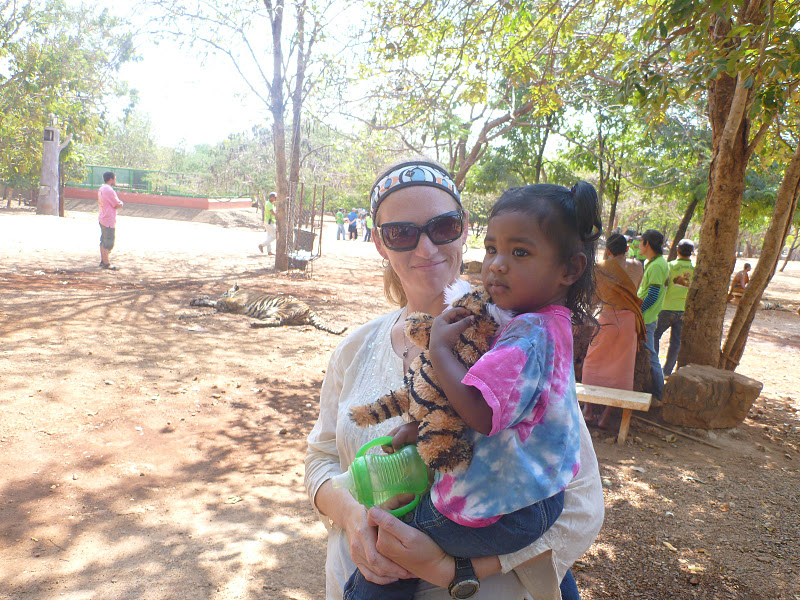 There we go, that tiger is more Sky's style

And the obligatory "Walking the Tiger" pictures: 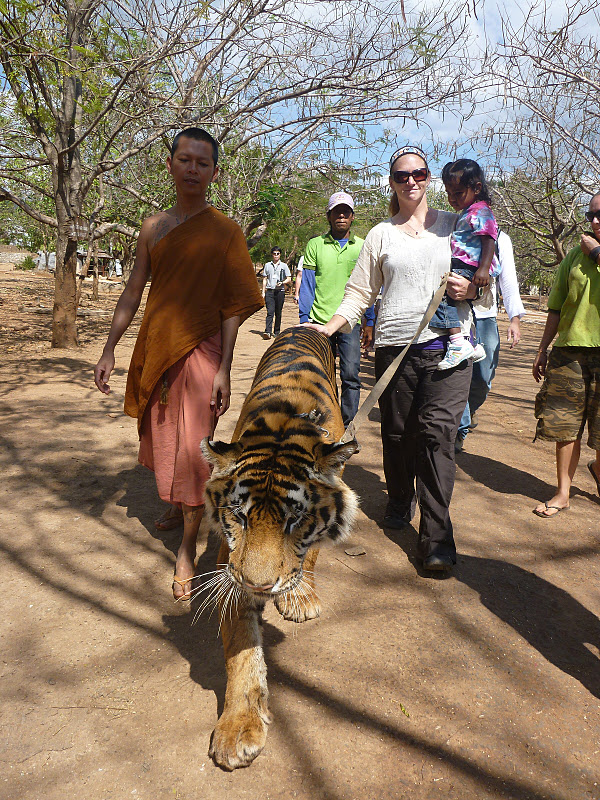 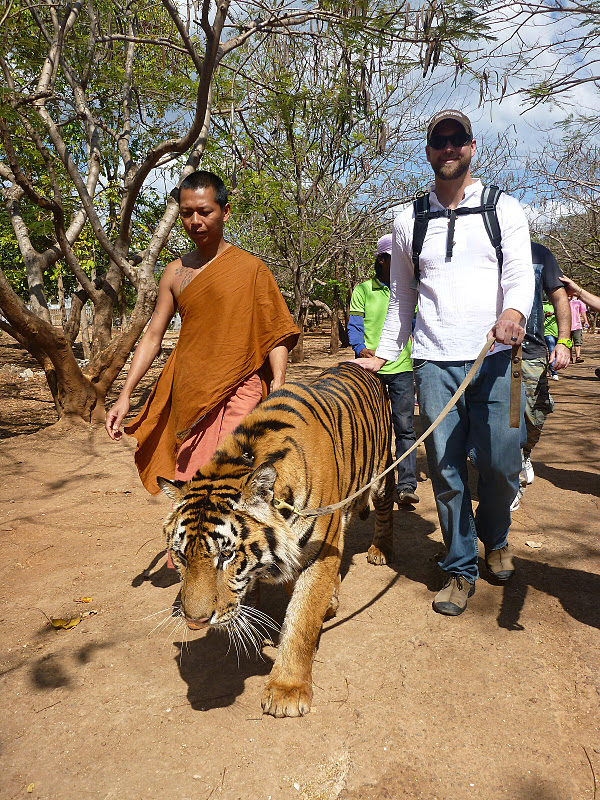