I'm sure you're all thinking, "A, the Kemem was this weekend. Where's the post on it? How did it go?" Sorry to keep you all waiting- life's been pretty busy this week- but here's the post you've been looking for. And to answer your question: The Kemem was great! The weather was perfect, there weren't any problems with family coming over from Ebeye, there was plenty of food, the music and dancing were wonderful, and everyone had a good time.

My day started early because I wanted to get all the set up and decorating done before it got too hot, so I was out at the pavilion by 7. My friends came by to help decorate at 8 and we worked until almost 11. I ordered all the decorations from Oriental Trading Company and went with blue and white for the theme. It was a little tricky keeping things up because the wind was blowing pretty bad but my friend Mary had some super double-sided tape that kept most of it up until the party in the afternoon.
Most of the guests came over from Ebeye on the 4:30 boat and I'd put 4:30 on the invitations but people didn't really start showing up until closer to 5. Things rolled along on island time until the pastor was ready to give the invocation around 5:30. Then the band started playing and things just flowed. The food showed up at 6:30 just like it was supposed to (the serving spoons didn't show up at 6:30 but catering staff was nice enough to go back for them) and there was plenty of it. Everyone got enough to eat and there was plenty leftover for folks to take home.
Once pretty much everyone had eaten, the band took a break for their dinners and the dancers came up. They did three different dances and during the last one, they started pulling people out of the audience to dance. Marla, the head of Sky's preschool, and D both got pulled up to dance. Every once in while, someone would step out of the dance and just start boogie-ing and everyone would just laugh and laugh.

After the dancing, we had the traditional Marshallese birthday "parade" where everyone lines up with a small gift, usually money, and they tell the baby "Happy Birthday" and give him a kiss and shake his hand. After that, D and Fire cut the cake and we all had some while the band played a little longer. Before everyone left, they all helped us take down the the decorations and clean up.
I can't say it enough: it was a wonderful night. I was so nervous around 4pm that I thought I was going to be sick. I made myself drink a Sprite and walk around so that I could calm down a little bit. Of course, nothing that I worried about actually happened and the few problems we ran into were easily solved with the help of our friends. For me, the highlights of the evening were helping serve the food (nothing makes me happier than feeding people) and hearing our MC call everyone there "the Bates family from Ebeye". I'm sure he did it because it was an easy way to name the whole group but it really touched me every time he did it. Bubu and Jimma said that the party was great and everyone that I've run into so far has said that they really enjoyed it.
I'm so glat the that we were able to do this, to invite so many people to Kwaj and to throw a successful party. I'm sure it wasn't a perfect Marshallese Kemem but it wasn't an American style birthday either. In that, the party was a complete success: a fun, enjoyable blend of both our cultures.

The pavilion and overflow seating, before the party: 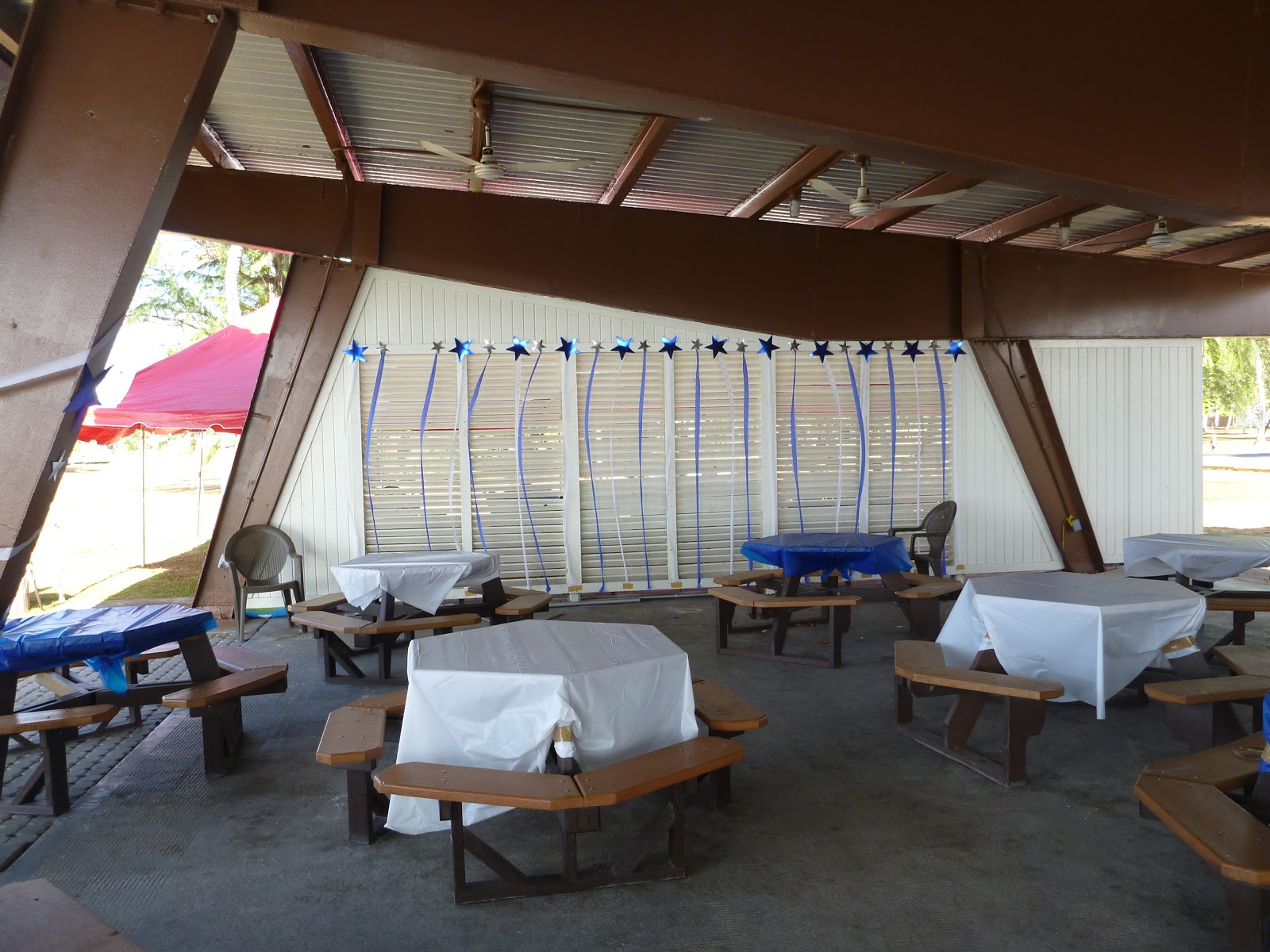 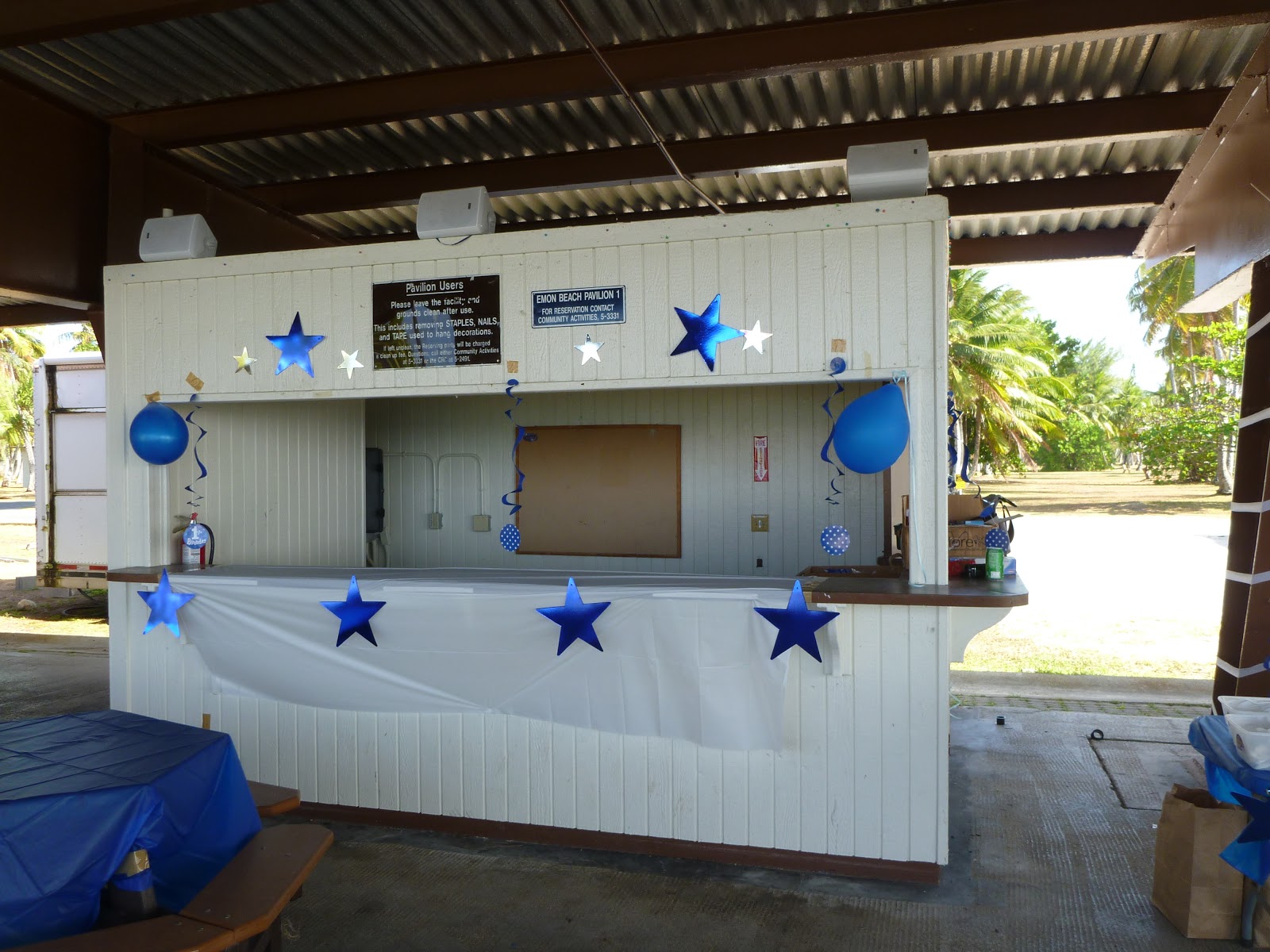 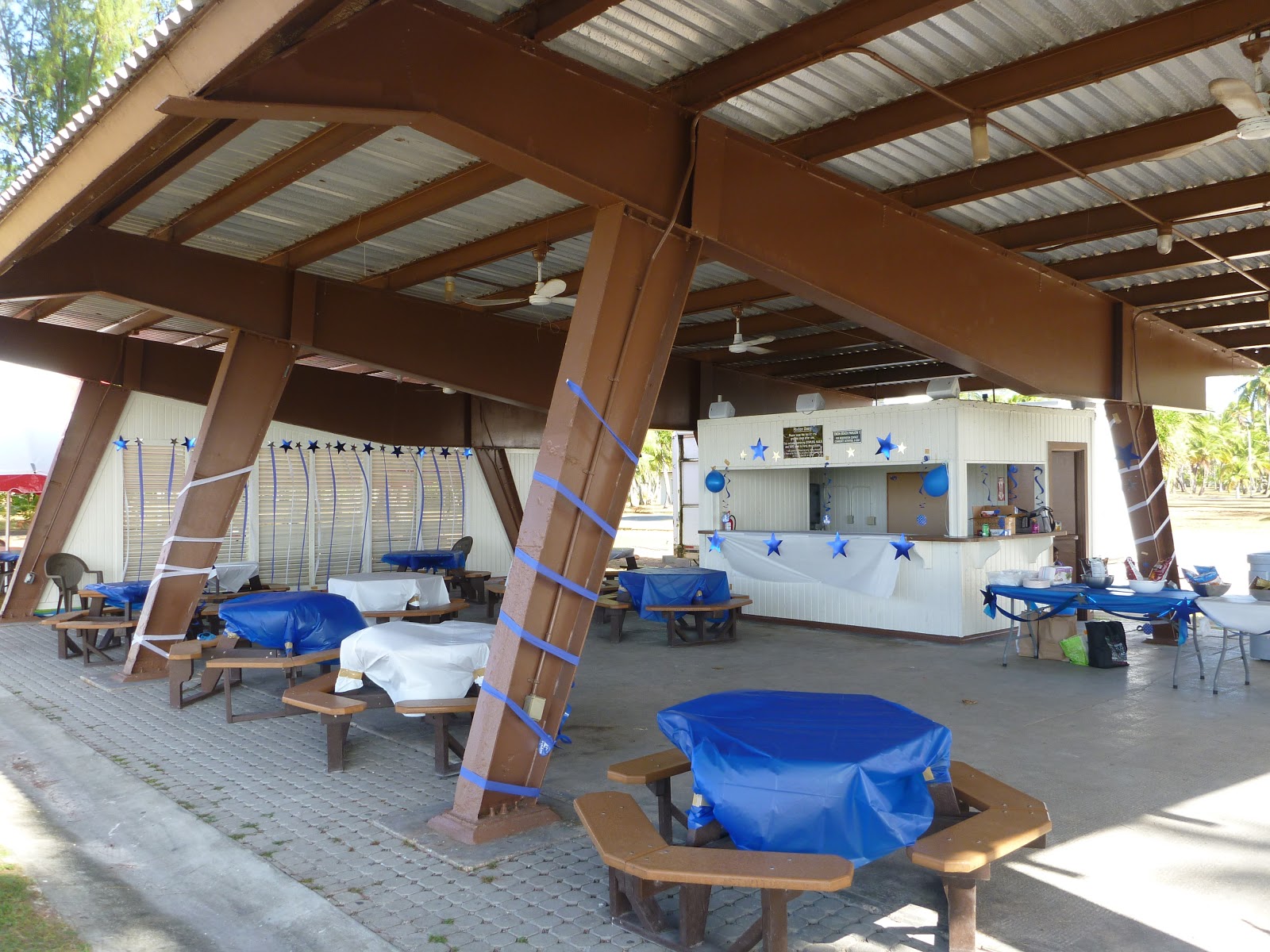 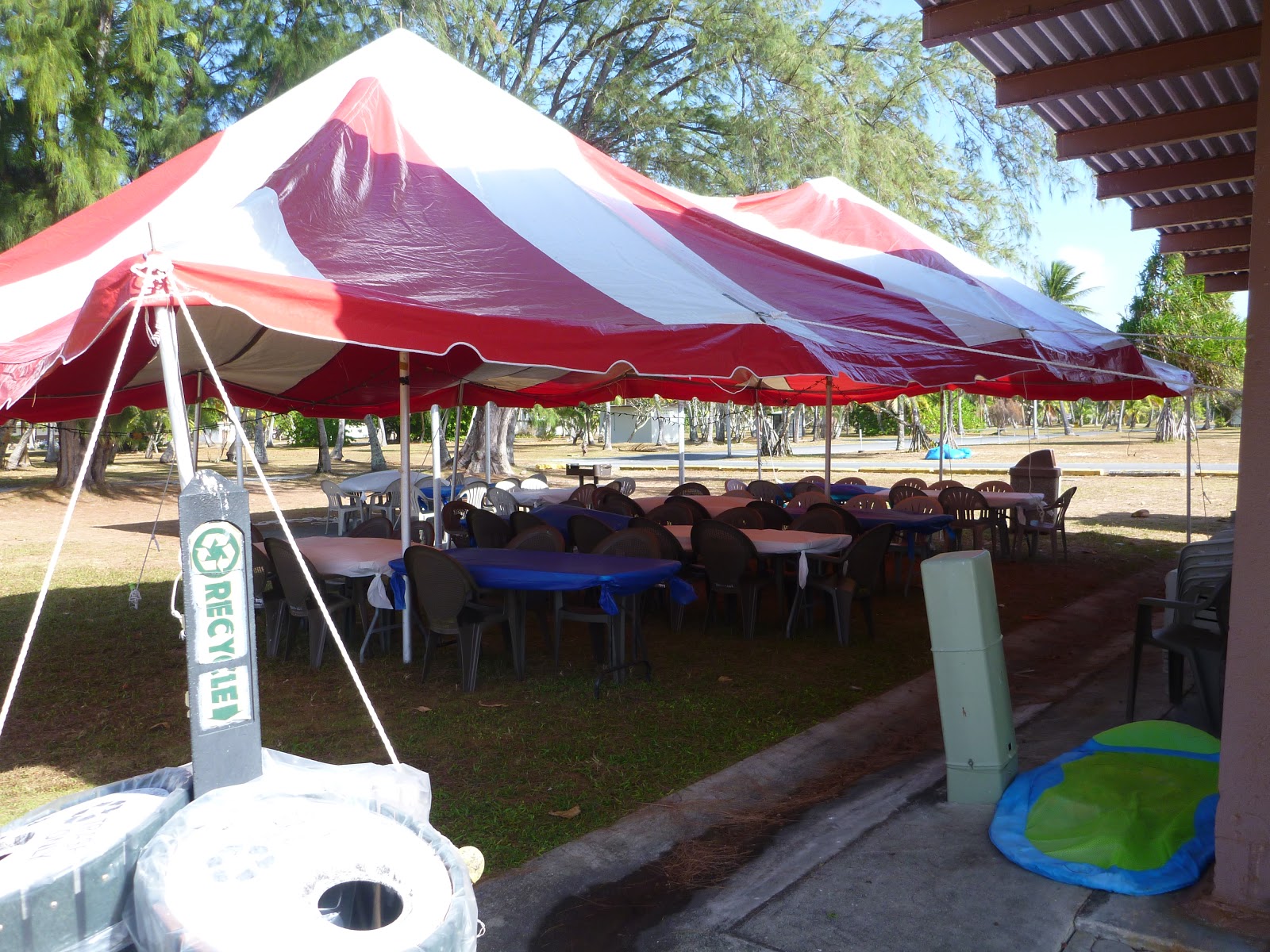 Florina's mom made us clothes for the party: 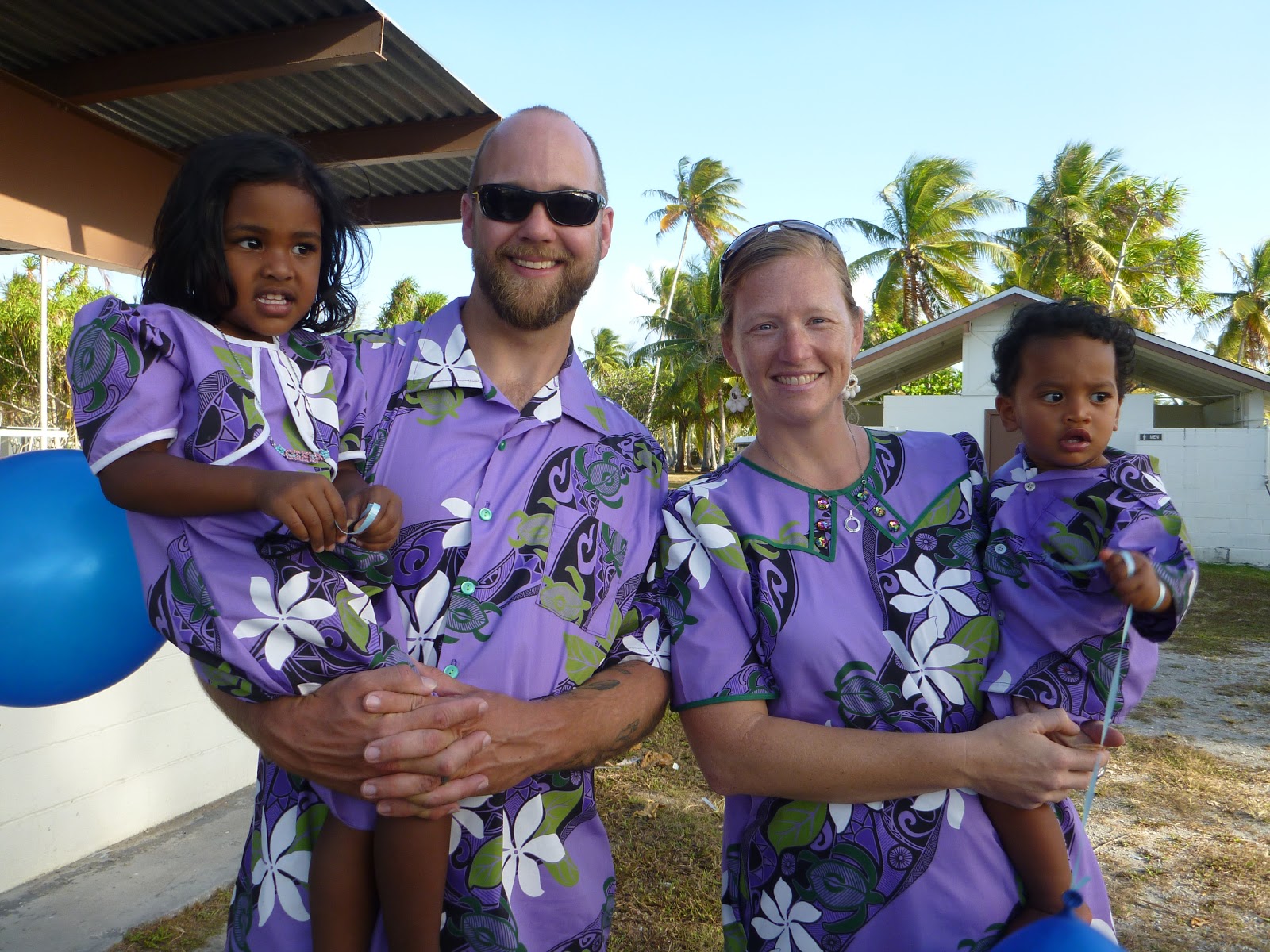 Don't we look great!
People starting to show up
﻿ 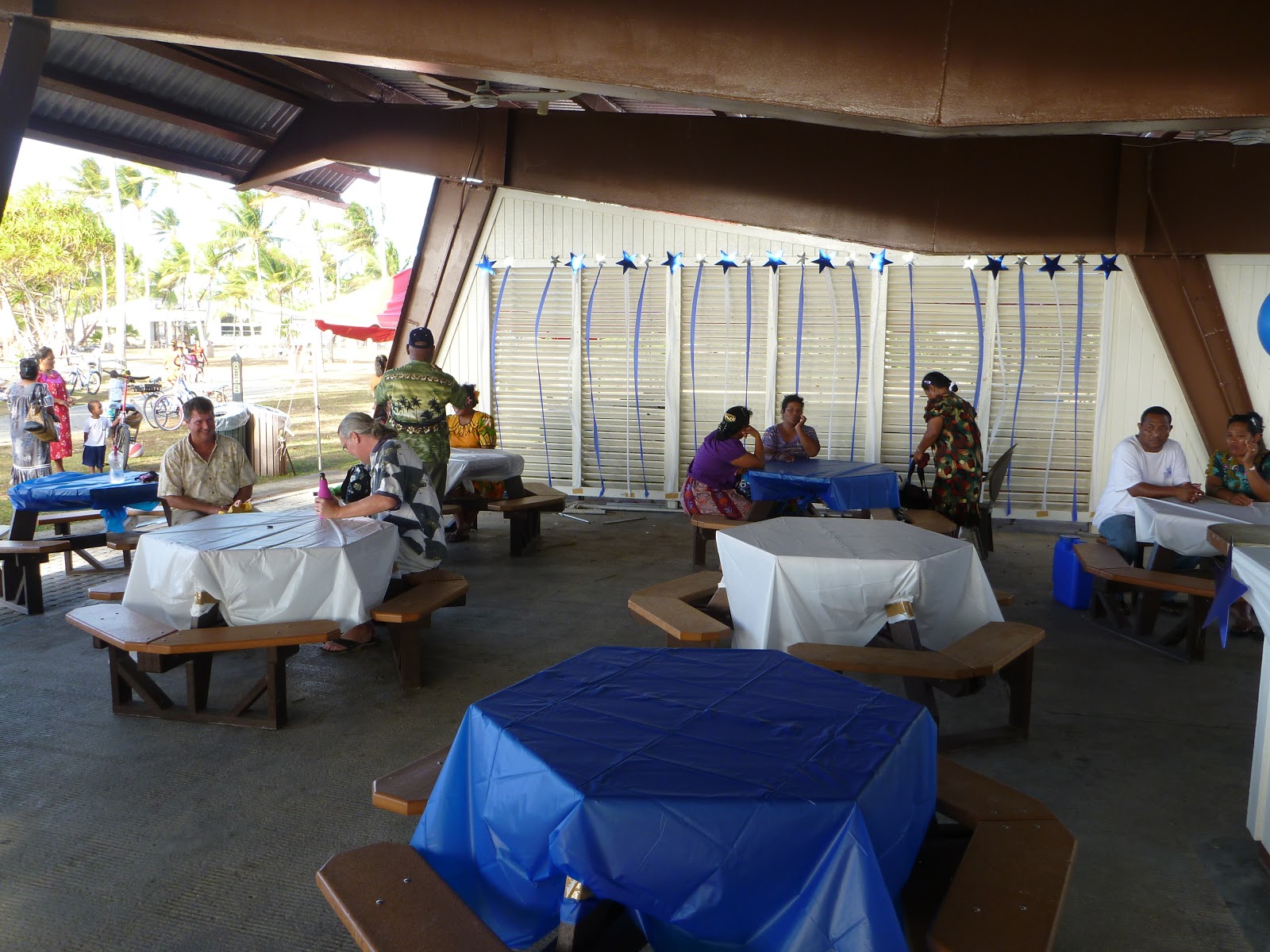 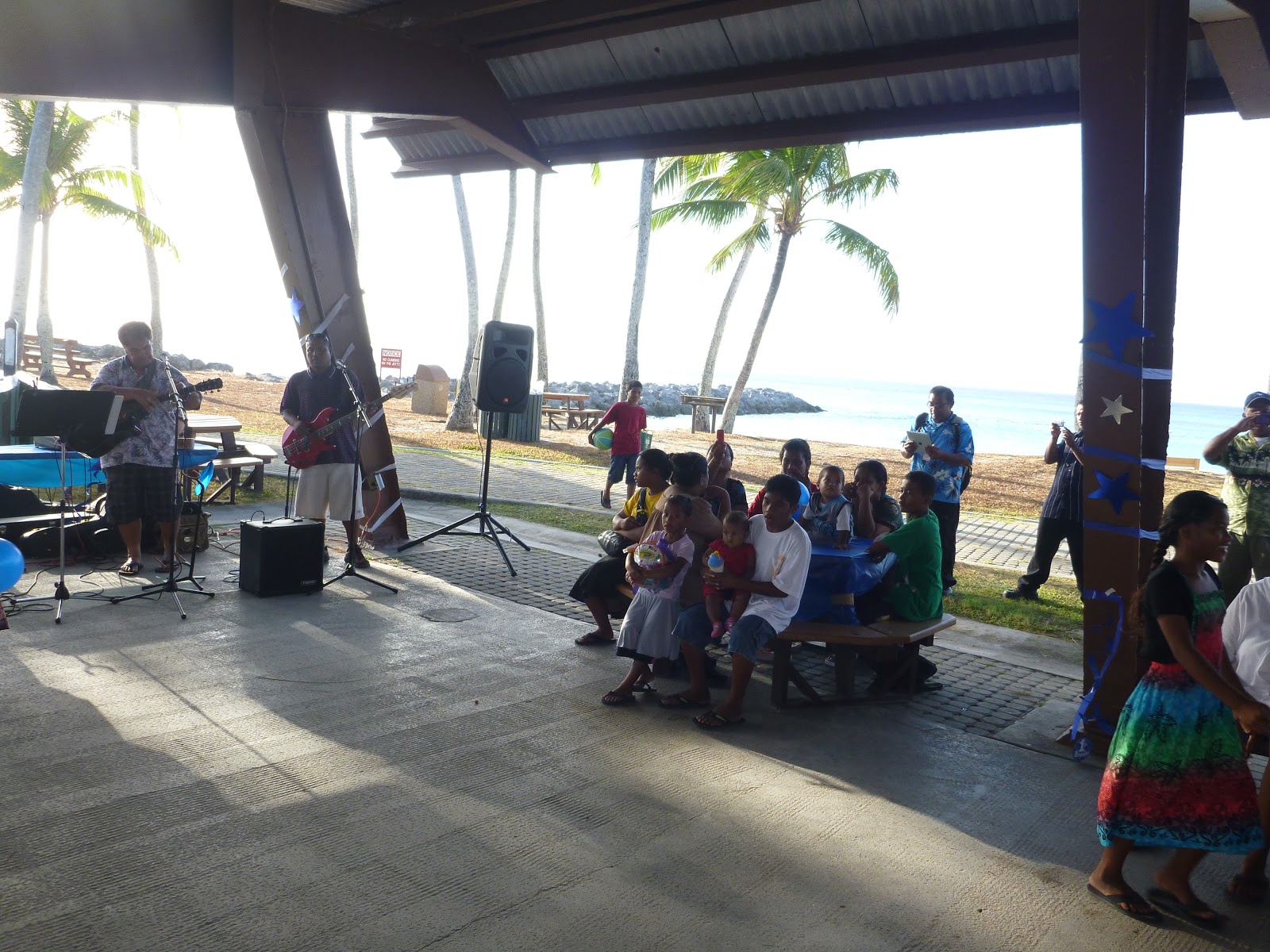 The food line, and me in my muumuu, feeding my family﻿ 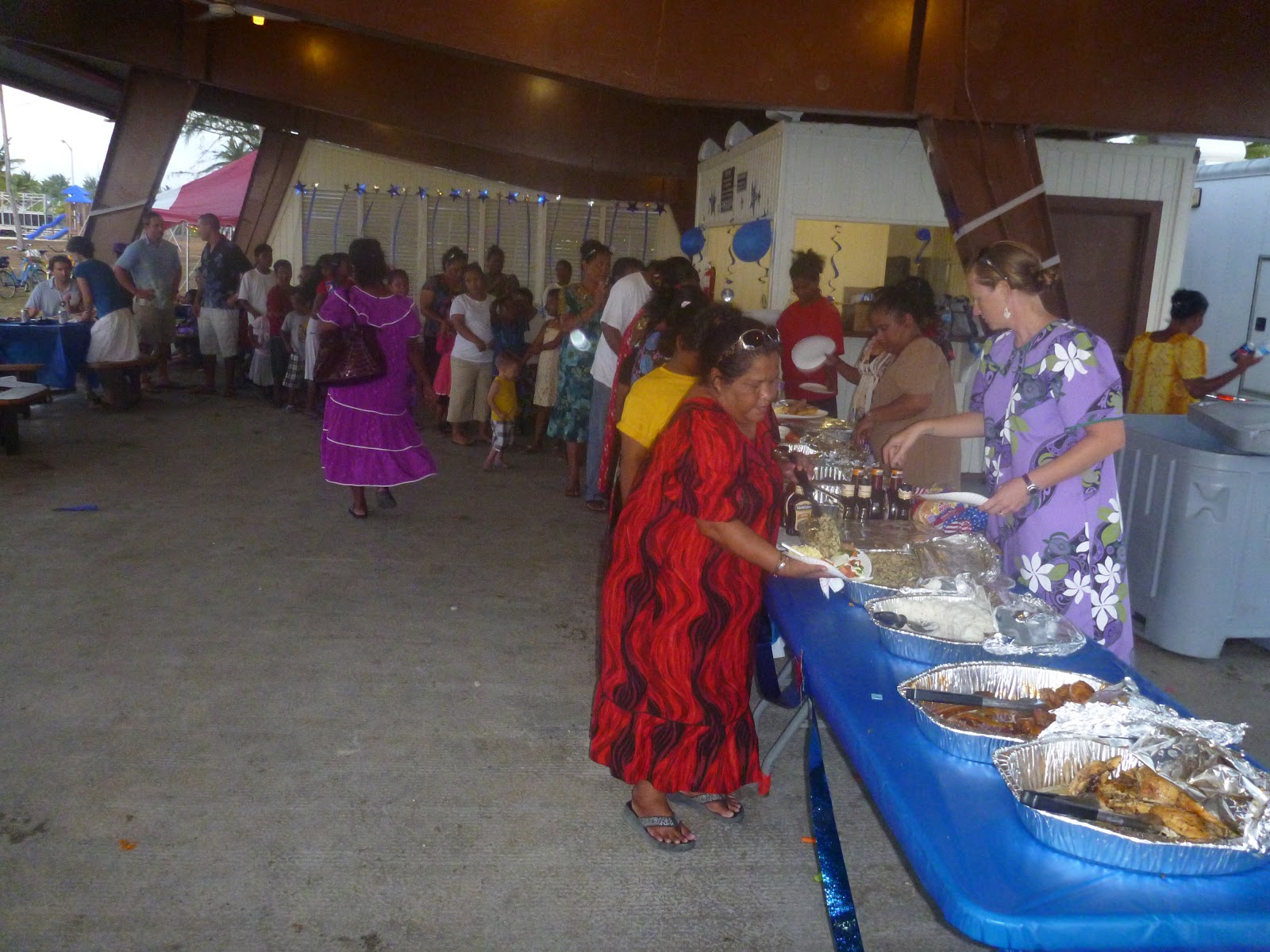 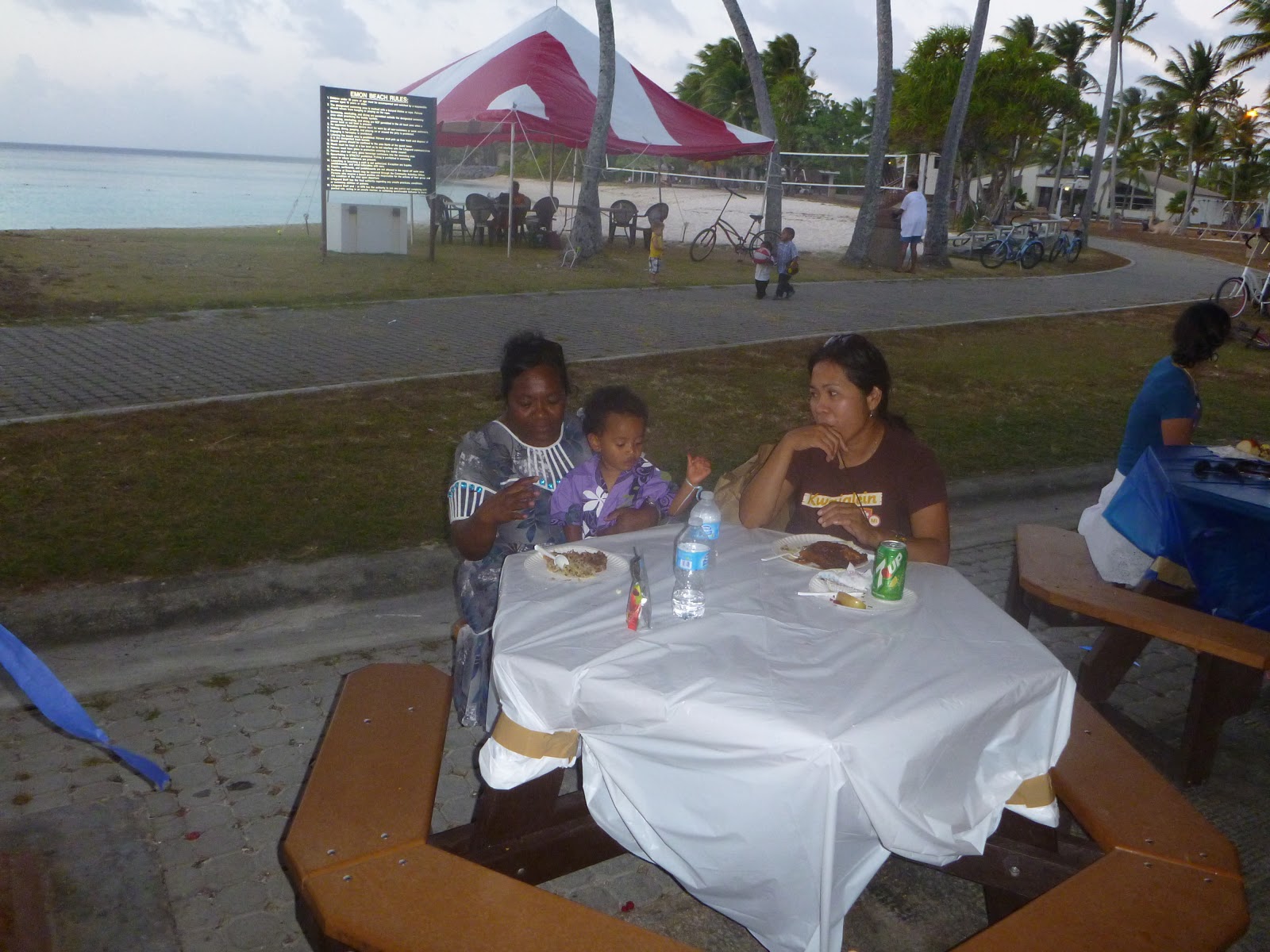 The lady on the right is Ms Angie. She's Sky's teacher at school and watches Fire in the nursery on Sundays. Between Ms Angie and Ms Florina (and all the family that would pick him up for a cuddle), Fire was looked after all night. 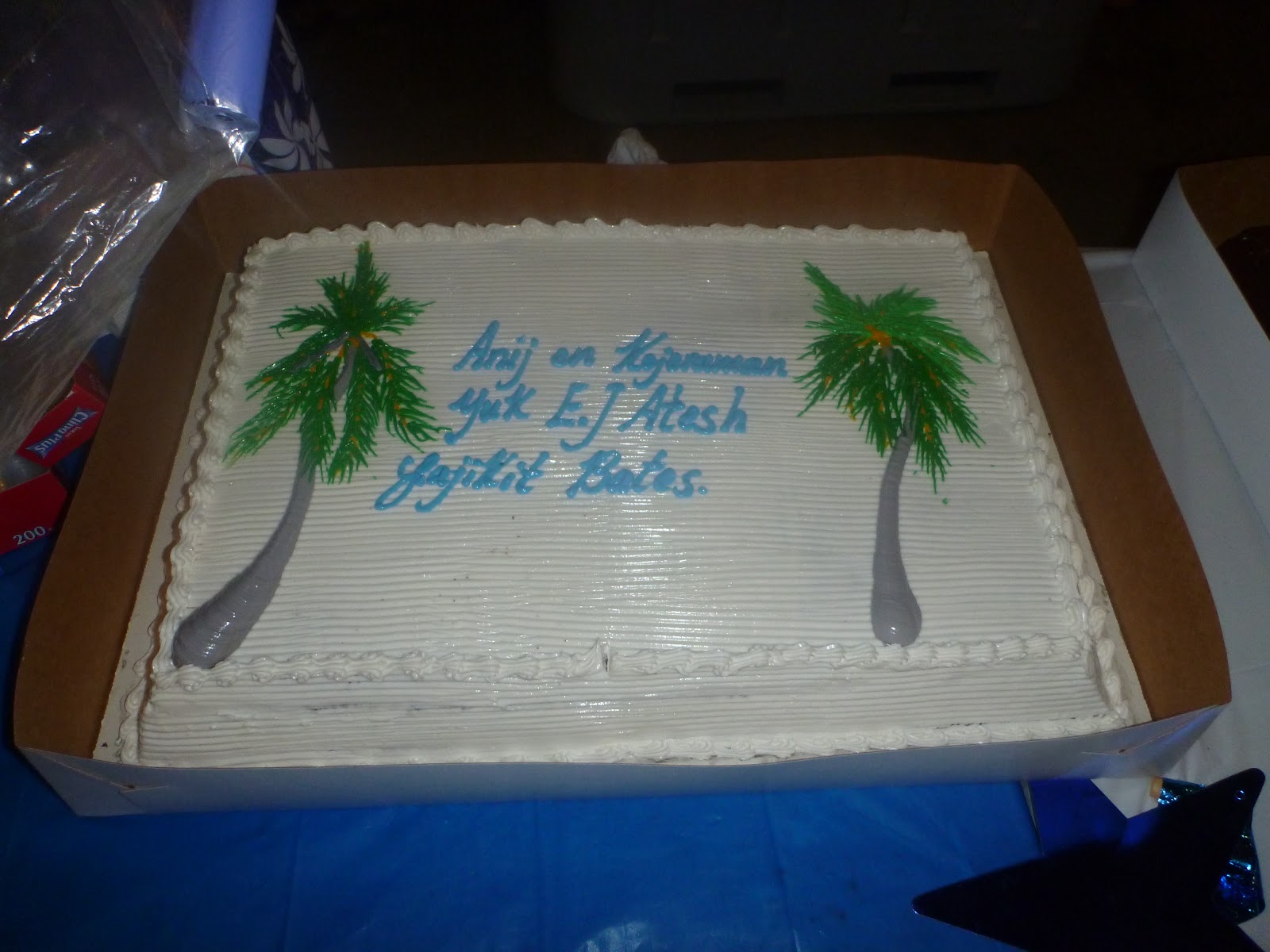 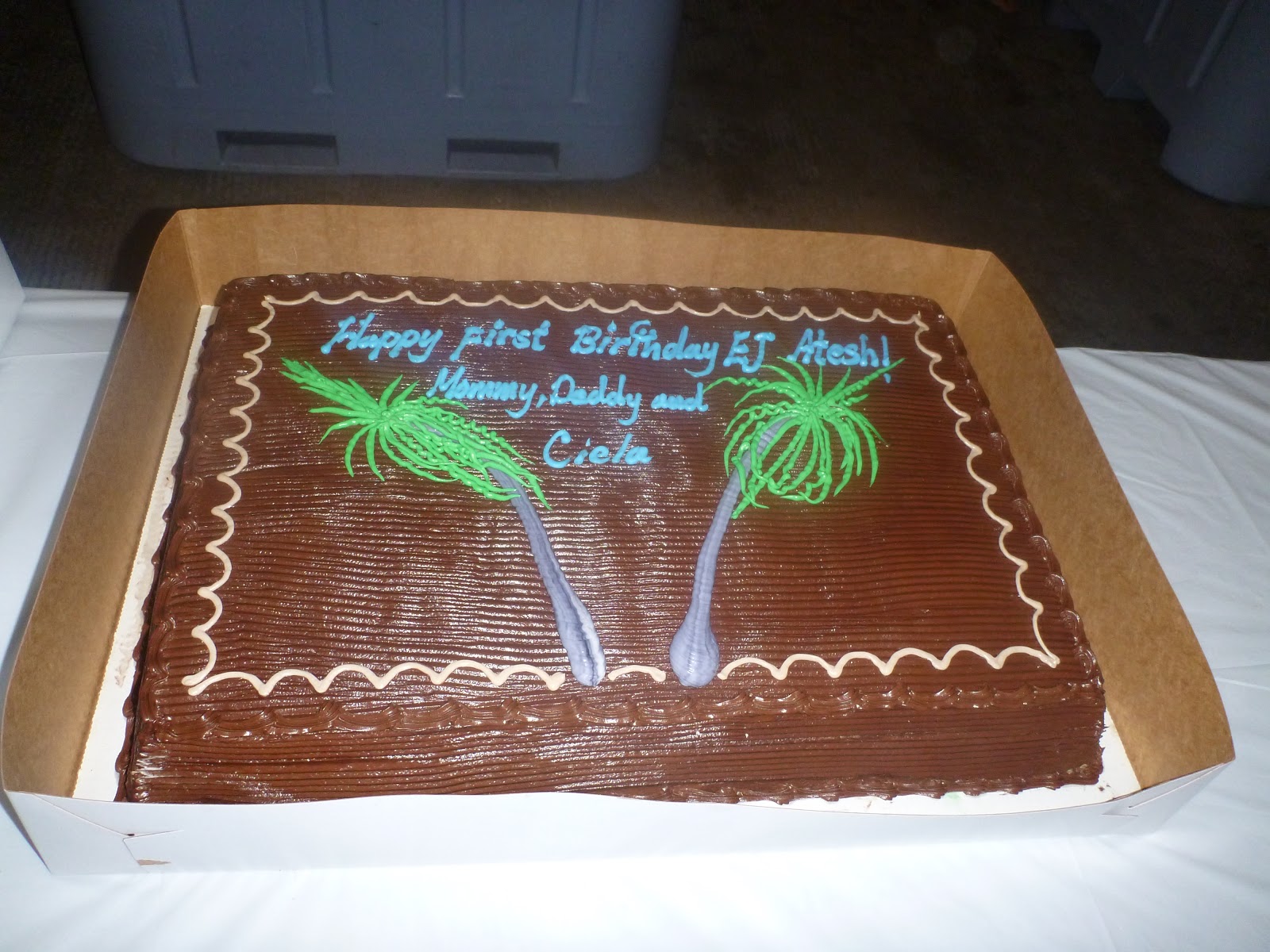 D and Fire cutting the cake﻿ 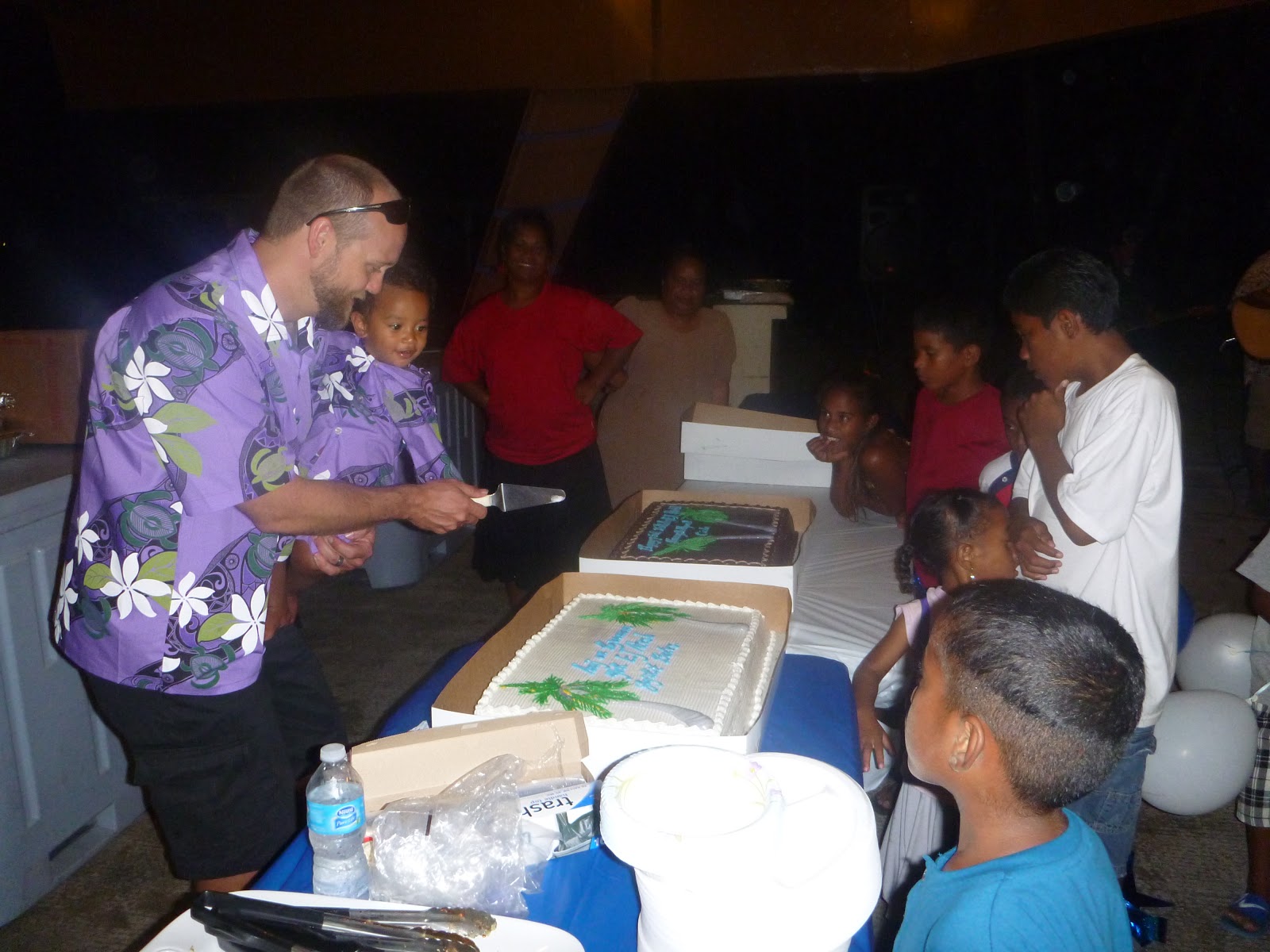 We call that a Marshallese serving of cake!﻿ 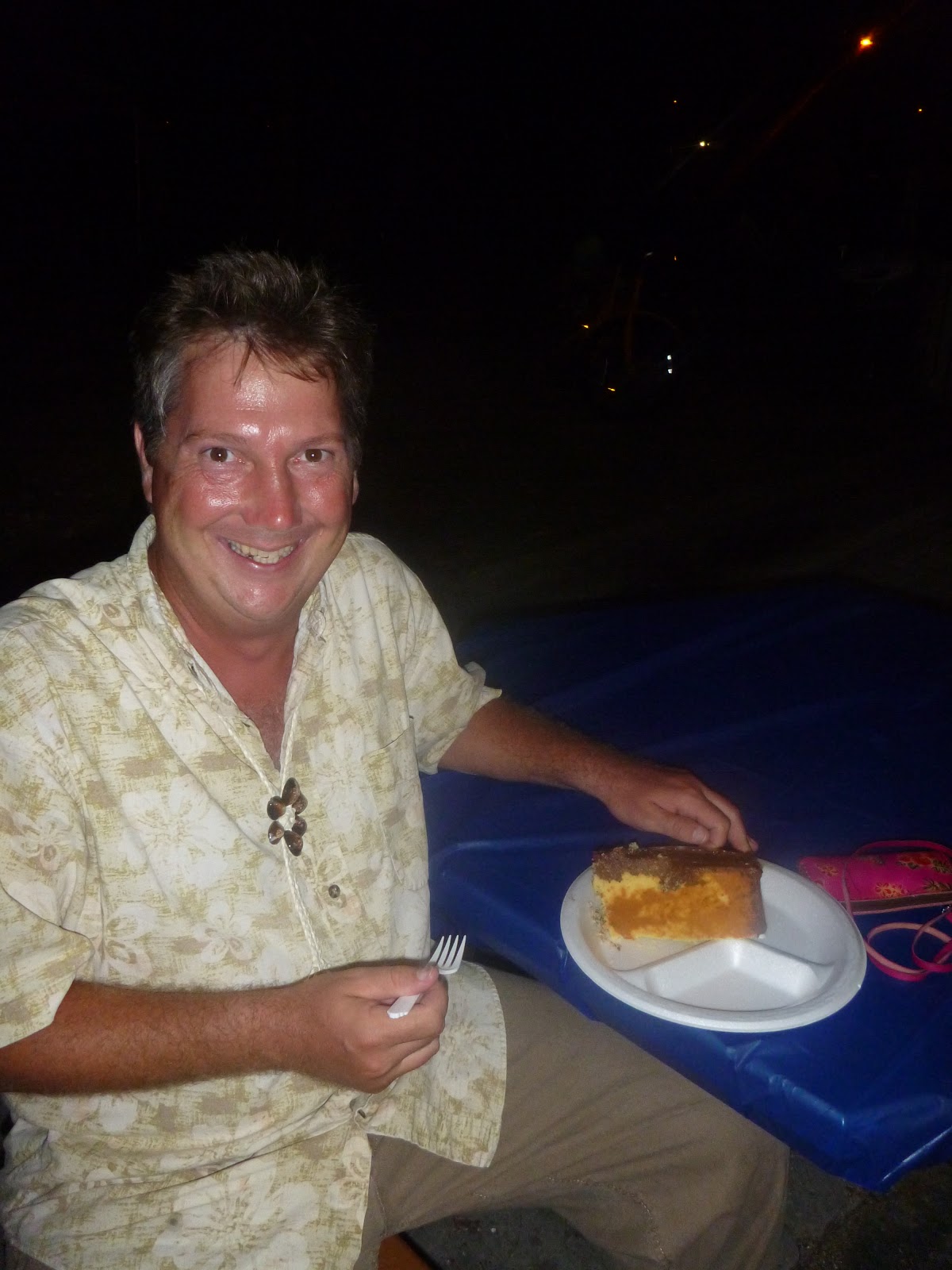 Here are some videos from the party. I can't see them because of the filters but I hope you can. If they show up, there should be one of me before the party, a bunch of dancing videos and one of the birthday parade.