This past Sunday was Gospel Day, a national holiday to celebrate the day that the first missionaries brought the Christian gospel to the people of the Marshall Islands.  We don't celebrate it on Kwajalein but it's a very big deal everywhere else in the country.  Every church organizes groups of young people to dance and sing and everyone around is invited to watch.  The line dances are called "jebta" and I love watching them.  We weren't able to get to Ebeye early enough in the afternoon to see Lomodro dance his jebta but Auntie took us to see the one at the Mormon church.
Parading in and then around the church﻿ 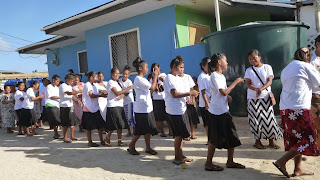 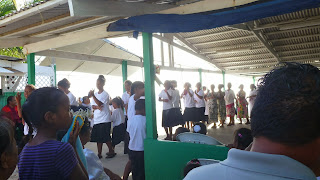 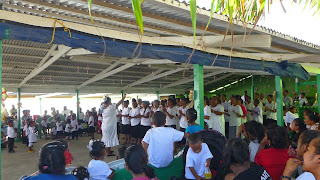 Fire with his Bubu﻿ 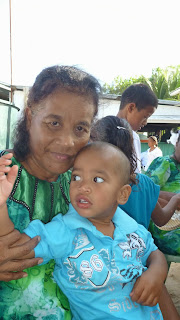 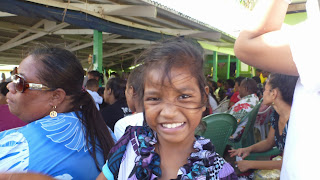 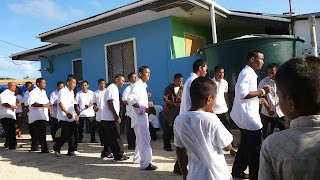 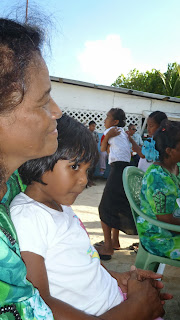 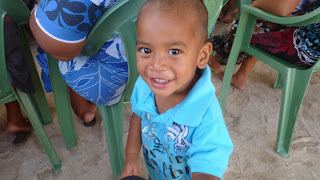 This is Crabby, which means "gecko" in Marshallese.  His real name is Ling (he's half Chinese but you'd never guess it) and he's AJ's little brother.  He likes to run up and poke me and then run away laughing! 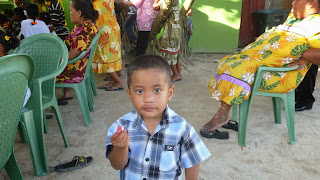 The quality is terrible- it took me a bit to figure out how to start and stop the video feature on my camera- but this is the best video I got of the dancing.﻿


Beautiful singing.  I wish I'd gotten the start of the song- there was a group of young boys calling out (in Marshallese), "Gospel!  Our island's morning star!"﻿


After watching the jebta dances, the kids and I headed home for a family movie night, the second prize that Sky's bought with her good behavior pennies.  As a surprise, we let her open one of her birthday presents early-  the Puss in Boots movie, or as Sky says, "The kitty cat movie!"
Monday morning started very early because D and I were both running on teams in Pauper's Marathon (named because the originators didn't have the money to fly to Honolulu for the marathon there).  I only ran five miles (and it was a pretty slow five miles, I'm sad to say) but David ran 13, a full half-marathon.  Here he is finishing his second of five laps: 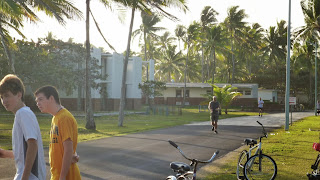 The rest of the day was so full it's almost a blur today: Sky had her last dance class , then into town to get the kid's visa photos taken, then naps, then our regular Monday afternoon trip to Ebeye, which turned out to be a much different evening than usual.
When we got to Bubu and Jimma's house, they were waiting for us on the porch. Jimma said that he'd been to see the doctor at the Ebeye Hospital and that he was being admitted there right away.  He had waited until we arrived because he wanted to tell us himself.  We walked down to the hospital with Auntie and Uncle and I helped Auntie set up his bed (you have to bring your own linens but they do bring you food).  He was in a room with four other men but Auntie and Uncle asked us to stay and talk.  Uncle told us that the doctor had arranged for blood tests early the next morning and that he was going to present the case to the referral committee on Wednesday.  I'm trying not to get my hopes up too high because I don't want them to be crushed but I'm encouraged by the fact that the doctor is even presenting the case to the committee.  He could have just told Uncle to stay home and pass away quietly like the doctors on Kwaj did.  We'll be going back over on Wednesday night to hear the doctor's report on the referral meeting and Uncle's final decisions.
At this point, I don't know what the best outcome is.  Uncle will still need dialysis for a long time and there's no guarantee that his kidneys will heal.  Is it better for him to go to the Philippines, stay there for several months, then come home no better than he left?  If he had family in the Philipines, I'd say yes but he doesn't.  On the other hand, I don't want him to just fall asleep, to not fight for more life when he really does have so much more in him.  We'll keep you posted.﻿