We had plans with two other families to grill out at the beach on last night and listen to the band that was playing but the weather wasn't working out like we hoped it would.  It had been raining off and on all day and just started sprinkling again when we were about to head out the door.  since we already had our bikes packed and didn't have any other plans for the night, we called our friends and told them that we were still going to be at the beach.  We picked Sky up at school and headed for Emon.
D got the grill started right away in case we had to call it an early night and Sky and I got busy playing in the sand.  It was windy and rained a bit but we still had fun.  Unfortunately, because there was thunder and lightening (a very rare occurrence here along the equator), the show was canceled.  We decided to stick it out anyway and we're so glad we did.  We had a yummy dinner of grilled brats, edamame, and potato chips and just as we were finishing, another family showed up!  They had their rain suits on but they were ready to grill, hang out, and play.  Sky and her friends hit the playground and we got to catch up on each other weeks while they grilled their dinner.
Just as they were finishing eating and it was getting genuinely dark, the other family we'd invited came by!  Suddenly we had four toddlers running around in the rain, two babies playing below the table, and six parents talking about work, kids, and Kwaj.  It was a great way to end the week!  We stayed out until the kid's teeth were chattering and then bundled them up into trailers for the ride home.

I'm so glad we didn't choose the easy way out of our evening- instead of spending the night slumped on the couch, we had a great time out with our friends.  These are the things we'll want to remember if we ever move on from here. 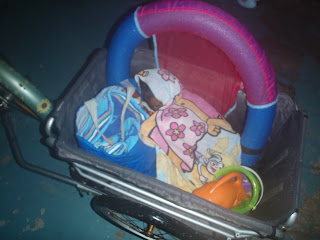 Sky fell asleep in the trailer and woke up just as we took her picture
Labels: Family Kwaj
Location: Kwajalein Atoll, RMI