D and I have been letting our thoughts on the kemem, and on the advice we gotten about it, roll around in our heads and we're starting to lean towards having the party here on Kwaj for several reasons:
1: Fire's birth family actually did ask that we have the party at Emon Beach, so we would be honoring their wishes by having it here.
2: As an anonymous commenter pointed out in my first post on this, we won't be able to control the cost very well and while D and I aren't hurting for money, we're not really rolling in it either.
3: A good friend also made a really good point: that Fire is both Marshallese and American and that his whole life is going to be about finding a working balance between those two.  Maybe this party is where finding that balance starts for our family.

We're holding Fire's baptism at Emon Beach this weekend and I'm going to look at it as a trial run for the kemem.  We're sponsoring over 23 people from Ebeye through a program called Community Exchange.  If this works out, than maybe we can expand our sponsorship to 40 people and make a real party of it. 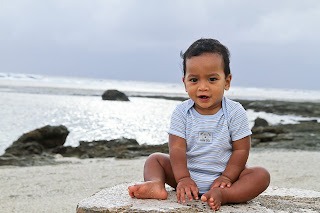