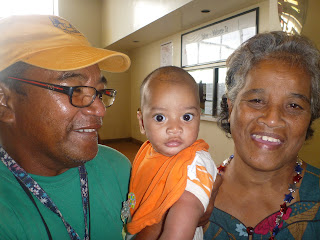 A kemem (say: kay-mem) is a first birthday party in the Marshallese culture.  Historically, because of the high infant mortality rates, when a child made it to their first birthday it was really something to celebrate.  Today, kemems are usually only thrown for first-born children and sometimes not even then.  Kemems are a big deal and big investment of time and money.  Fire will be one in February and because we'll be in States until January, we started discussing his kemem the other day.
Let me start by saying that we are blessed to have such a good relationship with Fire's birth-grandparents.  They have taken Ciela in as their own granddaughter and they've taken D and I into thier family as well.  They have opened their home to us and are teaching us the Marshallese language.  This is something we never expected and we are so happy to have.
We have a few kemem options: a smaller party here on Kwaj at Emon Beach or big party on Ebeye.  Auntie and Uncle (as they've told me to call them) have offered to "let us off the hook" as far as a kemem is concerned.  They've said that Fire doesn't need a big party, that one at Emon Beach with the 20 people that we're allowed to sponsor over from Ebeye would be fine.
And they've been very up front about what throwing a kemem on Ebeye would entail.  If we have the party on Ebeye, we're going to have to go big: at least 200 people with the expectation that 300 will show up.  And we'll have to feed all of those people.  Here's the example that Uncle gave: 15 cases of chicken at $36 each, and that's just the chicken.  We'd need rice, fish, salad, beverages, and desert, at least.  And the charcoal to cook the food  And then the fabric, because we'd all have new clothes made.  And, and, and.  We'd be looking at spending at least a thousand dollars on this party.
My midwestern upbringing is screaming that this should be an easy decision: why spend a thousand dollars on a party for a baby who won't remember any of it?!  But another part says that this is a great way to spend that money.  That this is an opportunity to truly embrace the Marshallese culture and all that it entails, and to thank Auntie and Uncle for their kindness.  This could be a chance for us to demonstrate our commitment to our children's Marshallese heritage.
What do you think?  Should we go big or go home on this or accept the reasonable financial limitations and have something smaller but possibly less meaningful?

11-30 Update: More thoughts on this topic here: To Kemem or Not To Kemem, Continued